Father Solanus Casey, a Detroit priest, would be a rarity among saints 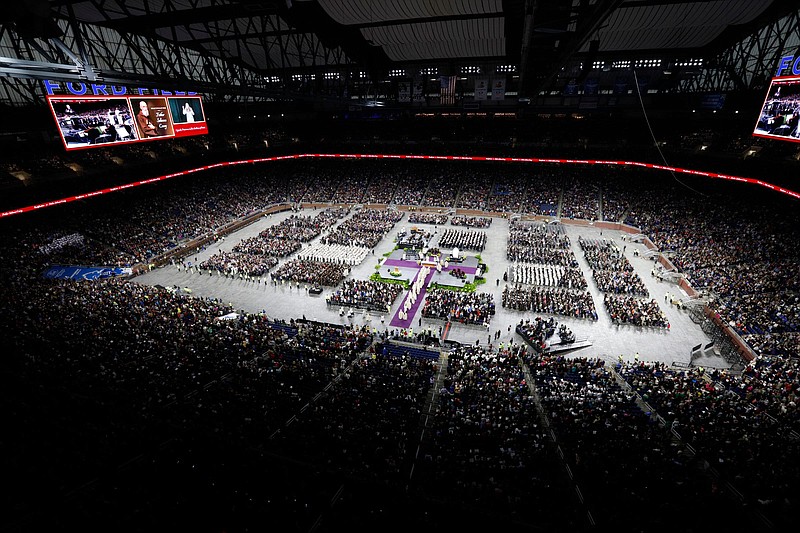 The service for the beatification of the Rev. Solanus Casey begins at Ford Field in Detroit on Saturday, Nov. 17, 2017. (Junfu Han/Detroit Free Press/TNS)

Father Solanus Casey, the Capuchin friar who co-founded the Capuchin Soup Kitchen in Detroit and was beatified in 2017, is known to many as an inspiration and is a miracle away from being declared a Catholic saint.

If canonized, Casey would join a rare group of American saints. While there are more than 10,000 saints in the Roman Catholic Church, fewer than a dozen are from the United States.

A 'premier citizen' of Detroit

Casey has been lauded as "one of the premier citizens of our city" by Detroit Catholic Archbishop Allen Vigneron, who added that Pope Francis "sees great holiness in Father's life."

The late priest is known for his great faith, humility and love of the violin. His significance also is tied to Detroit, which has wrestled with revitalization and deeply entrenched poverty.

For the beatification ceremony, nearly 70,000 people -- from parishes across metro Detroit as well as from other nations, including Ireland, Italy, Guam and Panama -- packed Ford Field.

At that event, many said they were saved by Casey's intercession.

Bernard Francis Casey was born in Oak Grove, Wisconsin, on Nov. 25, 1870. He was one of 16 siblings -- 10 boys and six girls -- whose parents were Irish Catholic immigrants looking to escape famine.

Three years after birth, he moved with his family to a larger farm in Wisconsin.

When he was 8, he contracted diphtheria, which killed two of his siblings. The disease left him with a speech disorder. At 12, he felt called to be a priest. At a Christmas Eve midnight Mass, he wondered whether he could become one.

He spent several years doing different jobs. He was a logger, street car operator, prison guard and hospital orderly. Then, at 21, he entered St. Francis de Sales Seminary in Milwaukee. He was unsure whether to become a Jesuit, Franciscan or Capuchin.

But, Casey said, the Blessed Mother told him: "Go to Detroit," where the Capuchins are based.

Life in Detroit as a priest

Casey was named after St. Francis Solanus, who lived in the 17th century and who, like Casey, loved to play the violin.

Casey was not a stellar student and as a result, not allowed to preach sermons. But he drew crowds asking for his blessings.

In Detroit, he helped start the Capuchin Soup Kitchen, which still exists. Unemployed workers came to the center begging for food and Casey would give them large sandwiches and cups of coffee.

His veneration and dedication

Pope John Paul II declared Casey venerable in 1995. In 2017, Pope Francis announced he would be beatified, saying there was proof of a miracle caused by Casey's intercession.

A favorite expression of Casey's that is often quoted: "Give thanks ahead of time." He meant, trust God and give thanks to Him no matter what because God never abandons you.

Casey's memory continues through the soup kitchen and his dedication to the poor.