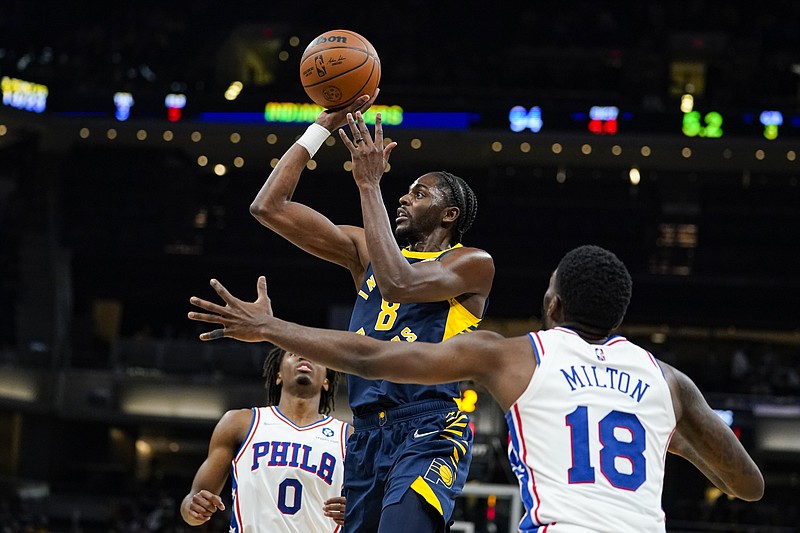 INDIANAPOLIS -- Justin Holiday came off the bench to score a season-high 27 points in the Indiana Pacers' 118-113 victory over the Philadelphia 76ers on Saturday night.

Philadelphia center Joel Embiid missed his fourth consecutive game after testing positive for COVID-19 on Monday. The 76ers have lost all four games.

Holiday was 9 of 11 from the field. Malcolm Brogdon had a triple-double with 13 points, 10 rebounds and 10 assists. Myles Turner added 20 points, and Domantas Sabonis had 18 points and 12 rebounds.

Duncan Robinson made six 3-pointers and added 22 points. Kyle Lowry had 21. Miami swept the season series with the Jazz and snapped a three-game losing streak.

Bojan Bogdanovic scored 26 points --19 coming in the fourth quarter -- for Utah. Jordan Clarkson added 25 points, and Donovan Mitchell had 22. The Jazz lost for the fourth time in five games.

CLEVELAND -- Darius Garland made two free throws with 9.4 seconds left and Cleveland rallied from 19 points down in the third quarter to beat Boston to open a two-game set.

Dennis Schroder had an opportunity to force overtime for Boston, but missed a jumper from the right baseline as time expired. There were five lead changes and seven ties in the final seven minutes.

The teams will meet again Monday at Rocket Mortgage FieldHouse.

Garland finished with 22 points and six assists, and rookie Evan Mobley had 19 points, nine rebounds and three blocks. Cleveland has won six of its last seven and is off to its best start in five years at 9-5. Schroder scored 28 points.

The victory was the first at home this season for the Pelicans, who had lost 12 of their first 13 games playing without Zion Williamson, sidelined with a broken right foot.

Dillon Brooks led Memphis with 23 points, and Ja Morant had 22.

Kyle Kuzma added 17 points and 10 rebounds to help Washington improve to 9-3 for the first time since the 2014-15 season.

Orlando's Cole Anthony scored 22 points, but he made just 4 of 16 shots.

Killian Hayes had 13 points and 10 assists, Saddiq Bey scored 16 points, Josh Jackson had 15 points and Frank Jackson added 14. The Pistons shot 6 for 8 from 3-point range in the fourth, outscoring Toronto 34-26 in the final period.

Pascal Siakam fouled out with 25 points and 12 rebounds, Gary Trent Jr. scored 23 points and OG Anunoby had 17 for the Raptors. Toronto lost for the fourth time in five games and dropped to 2-6 at home. 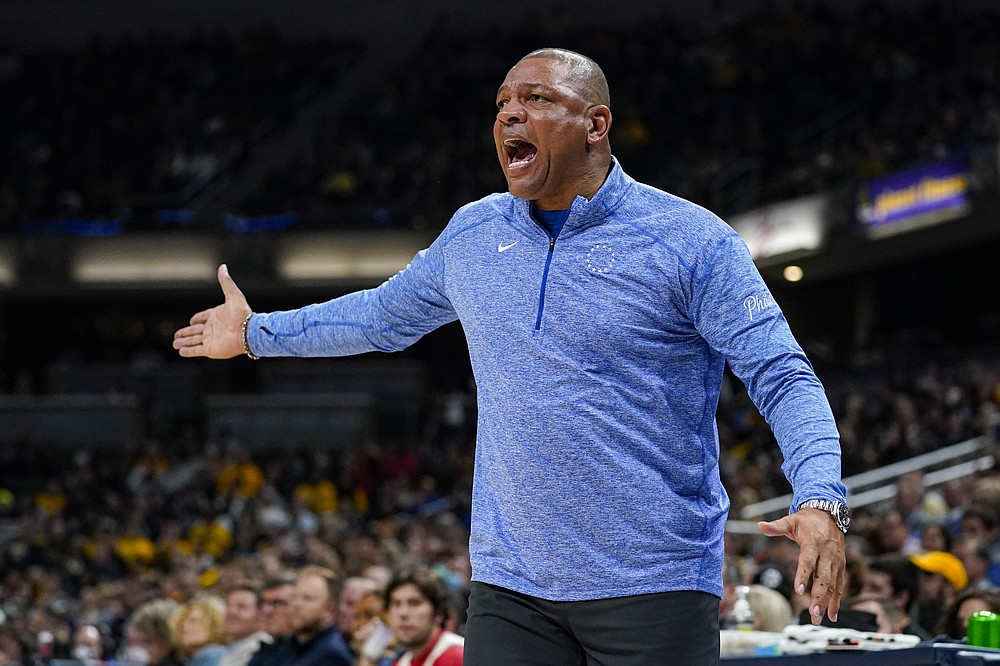 Philadelphia 76ers head coach Doc Rivers questions a call during the second half of an NBA basketball game against the Indiana Pacers in Indianapolis, Saturday, Nov. 13, 2021. The Pacers defeated the 76ers 118-113. (AP Photo/Michael Conroy)
ADVERTISEMENT