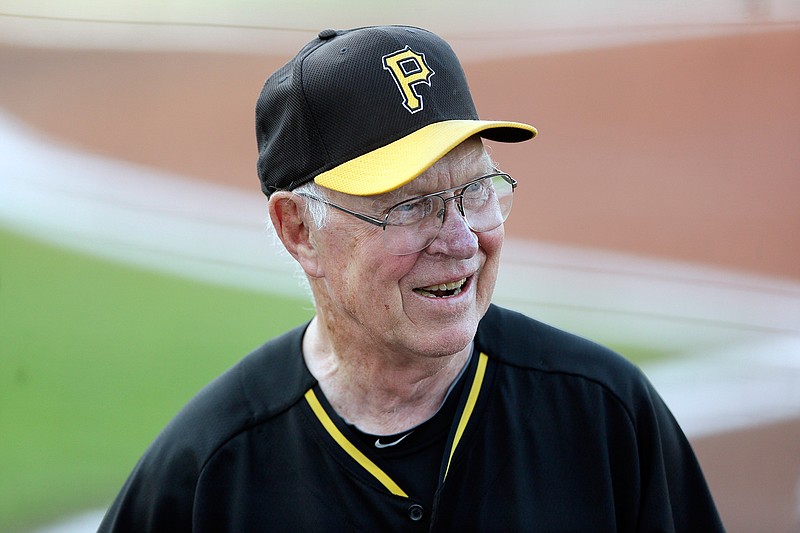 FILE - Former Pittsburgh Pirates player and manager Bill Virdon is seen before a spring training exhibition baseball game against the Detroit Tigers in Bradenton, Fla., Wednesday, March 18, 2015. Virdon, the steady centerfielder who won the 1955 National League Rookie of the Year for St. Louis as a player and then guided the Houston Astros to three straight playoff appearances as a manager, has died. He was 90. Both the Cardinals and Pirates confirmed Virdon's passing on Tuesday, Nov. 23, 2021. (AP Photo/Carlos Osorio, File)

Bill Virdon was one of the major leagues' smoothest-fielding center fielders of the 1950s and early '60s. He managed four teams, winning division championships with the Pittsburgh Pirates and Houston Astros and bringing a surprising New York Yankees team to the brink of one. But many remember him most for hitting a seemingly routine ground ball that was anything but: It sent the Pirates on their way to a dramatic Game 7 victory over the Yankees in the 1960 World Series.

Often described as "bespectacled," given the relative rarity of ballplayers with eyeglasses, Virdon, who died at 90 on Tuesday, was the National League's rookie of the year with the St. Louis Cardinals in 1955 but spent almost his entire career with the Pirates, playing alongside future Hall of Fame right fielder Roberto Clemente. The Pirates announced Virdon's death, in Springfield, Missouri.

Bill Mazeroski's walk-off home run gave the Pirates the 1960 World Series championship. But Virdon played an important role in that decisive game, at Forbes Field, as the beneficiary of a bad hop. The Pirates were trailing by three runs in the eighth inning with a runner on first and nobody out when Virdon, a left-handed batter, hit a ground ball to shortstop Tony Kubek off lefty Bobby Shantz.

"Shantz was tough on lefty hitters, and he was tough on me, so I didn't like facing him," Virdon told Victor Debs Jr. for the oral history "This Was Part of Baseball Then" (2002). "But he hung a curveball, and I hit it hard, but it was right at Kubek. I said to myself, 'Uh-oh, perfect double-play ball.'"

However, the baseball bounced up as Kubek was about to snare it, hitting him in the throat. It was scored a single, and Pittsburgh had runners on first and second.

The Pirates scored five runs in that inning, including a climactic three-run homer by catcher Hal Smith, taking a 9-7 lead. The Yankees tied the game in the ninth, but the Pirates won the World Series on Mazeroski's homer in the bottom of the inning off Ralph Terry.

In Game 4, at Yankee Stadium, Virdon had driven in two runs and made a leaping grab of a drive by the Yankees' Bob Cerv, crashing into the bleacher wall in right center. The Pirates won, 3-2, tying the Series. Virdon won a Gold Glove award for his fielding in 1962.

He remained with the Pirates through 1965, managed for the Mets in the minors, then returned to Pittsburgh as a player-coach in 1968, his last playing season. He became the Pirates' manager in 1972, taking them to the National League East title, but was fired late the following season.

In 1974, Virdon was managing the Yankees but not as anyone's first choice. The Yankees originally hired Dick Williams, who had quit the Oakland A's organization after taking the team to a second consecutive World Series championship in 1973. Williams had been angered by A's owner Charlie Finley's meddling. On the Yankees he was to replace Ralph Houk, who had left to become the Detroit Tigers' manager.

But the American League voided the deal when Finley and George Steinbrenner, who was completing his first season as the Yankees' principal owner, could not agree on player compensation to the A's, who still had Williams under contract. Steinbrenner instead signed Virdon to a one-year deal.

The Yankees had not won a pennant since 1964, but with players including Bobby Murcer, Thurman Munson and Graig Nettles, Virdon kept them in the '74 division race until the next to last day of the season. He was named the AL manager of the year by the Sporting News.

Virdon received a new two-year contract after the 1974 season at a time when Steinbrenner was under a two-year suspension for pleading guilty to federal crimes involving illegal contributions to President Richard M. Nixon's 1972 reelection campaign.

The tempestuous Steinbrenner bristled at what he felt was Virdon's lack of fire as the Yankees stumbled in midsummer 1975. In late July, although he was not supposed to be involved with running the team, Steinbrenner went to the apartment of Yankees President Gabe Paul and hollered, "Get rid of Virdon!" according to "Steinbrenner: The Last Lion of Baseball" (2010), by Bill Madden. Virdon was fired, and Billy Martin succeeded him in the first of his five stints as Yankees manager.

William Charles Virdon was born June 9, 1931, in Hazel Park, Michigan, to Charles and Bertha Virdon, and grew up in West Plains, Missouri, after his parents returned to their native state. There, his father ran a country store and his mother was a homemaker. He was signed by the Yankees out of Drury College, now university, in Springfield in 1950. When he had trouble with his hitting in the minors, his manager, Harry Craft, suggested he wear glasses. His hitting improved, so he kept them on.

Virdon was traded to the Cardinals organization in April 1954 in a deal bringing future Hall of Fame outfielder Enos Slaughter to the Yankees. Virdon batted .281 in winning rookie of the year honors in 1955, but the Cards sent him to the Pirates in May 1956 when he slumped at the plate. He went on to hit .319 that season and had a career batting average of .267 for 12 major league seasons.

After managing the Pirates and Yankees, Virdon took the 1980 Houston Astros to an NL West title, the first one in their history. He later managed the Montreal Expos.

After his years as a manager, Virdon was a coach for the Astros and the Pirates.

He is survived by his wife, Shirley; his daughters Debbie Virdon Lutes, Linda Virdon Holmes and Lisa Virdon Brown; seven grandchildren; and 13 great-grandchildren.

In his memoir "Uppity" (2011), former Yankees broadcaster Bill White credited Virdon for taking the Yankees to a second-place finish in 1974, but he characterized him as "a quiet, standoffish guy who wasn't particularly popular with the players."

On opening day 1975, Steinbrenner ordered Virdon to have the Yankees players listen to a tape recording that Steinbrenner had made to inspire them. By the time that season ended, Virdon had long been fired and the volatile Martin was presumably supplying the needed fire. That Yankees team finished in third place.