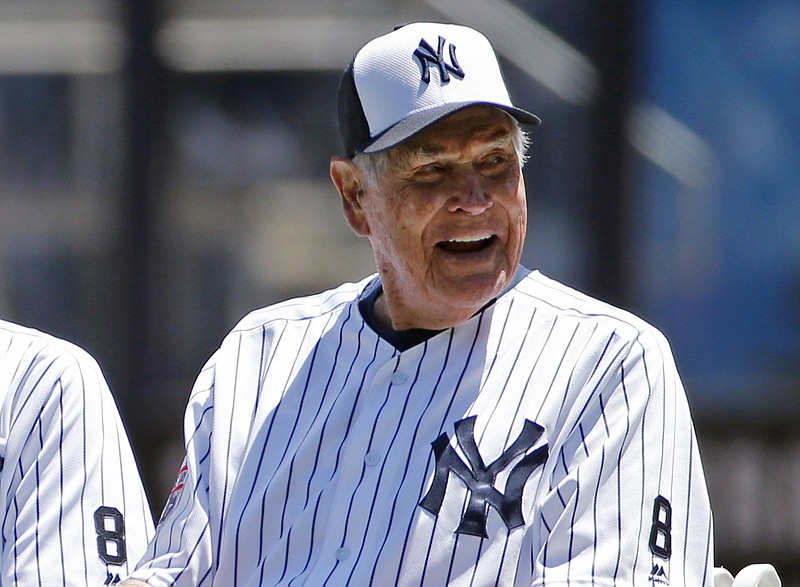 In this June 12, 2016, file photo, former New York Yankees player Eddie Robinson smiles before the Yankees annual Old Timers Day baseball game, in New York. Former big leaguer and general manager Eddie Robinson, who was the oldest living former MLB player, has died at age 100. The Texas Rangers, the team for which Robinson was GM from 1976-82, said he passed away Monday night, Oct. 4, 2021 at his ranch in Bastrop, Texas.(AP Photo/Kathy Willens, File)

Eddie Robinson, the oldest living former major league baseball player, who spent 65 years in the sport as a player, scout and executive and was the last surviving member of the 1948 World Series champion Cleveland Indians, died Oct. 4 at his ranch in Bastrop, Texas. He was 100.

The death was announced by the Texas Rangers, for which Robinson served as general manager. The cause was not disclosed.

Robinson helped Babe Ruth onto a baseball field for the last time, was a teammate of Mickey Mantle, Yogi Berra and onetime Negro Leagues phenomenon Satchel Paige, and played alongside Joe DiMaggio and Ted Williams in all-star games. Still employed in baseball in the 21st century, he was honored at the 2016 World Series in Cleveland, when he was 95, and continued to follow the game closely until his death, including a podcast that he began this year.

A strapping first baseman who played his first professional game in 1939, Robinson was a four-time all-star and played with seven of the eight franchises then in the American League, including the old Washington Senators, before retiring in 1957.

He made his major league debut with the Indians in 1942, served in the Navy during World War II, then became a cornerstone of a powerful 1948 Indians team that included six players later enshrined in the National Baseball Hall of Fame: Bob Feller, Paige, Lou Boudreau, Larry Doby, Joe Gordon and Bob Lemon.

The Indians beat the Boston Red Sox in a playoff game to win the American League pennant, then faced the Boston Braves in the World Series. Cleveland's enormous stadium drew more than 80,000 fans to the games.

"I'm from Paris, Texas, population 20,000," Robinson recalled to the Cleveland Plain Dealer in 1998, "and I remember thinking, 'Man, we've got four times as many people watching me play baseball.' The noise was kind of a constant roar."

In the sixth and final game, played in Boston, Robinson drove in what proved to be the winning run, with an eighth-inning single off Hall of Fame pitcher Warren Spahn to give Cleveland a 4-1 lead. The Indians shut down a Boston rally, then held on to win, 4-3, and claim the World Series title.

On the train ride back to Cleveland, the players celebrated.

"Champagne was still dripping from the ceiling in the dining car, when we went in the next morning for breakfast," Robinson recalled almost 70 years later.

At 6-2 and 210 pounds, Robinson was one of the bigger players of his era. He was a left-handed hitter who drove in at least 100 runs three times - twice with the White Sox in 1951 and 1952 and again in 1953, his only season with the Philadelphia Athletics.

He was the American League's starting first baseman in the 1949 and 1952 all-star games and drove in Yankee superstar DiMaggio with a hit in the 1949 game. Williams, a Hall of Fame outfielder with the Red Sox, once called Robinson "the most underrated and best clutch hitter I ever played against."

Nevertheless, in a pattern that recurred throughout his career, Robinson often found himself on teams with a surplus of slow-footed first basemen and was frequently traded. After the World Series glory of 1948, he was sent to Washington, where he became the lowly Senators' top hitter in 1949.

The next year, he was on the move again to the Chicago White Sox, tying a franchise record in 1951 with 29 home runs. He spent two years as a part-time player and pinch hitter with the Yankees, slugging 16 home runs in just 173 at-bats in 1955. Hindered by a leg injury, he retired in 1957, after brief stints playing in Kansas City, Baltimore, Cleveland and Detroit. He had a career average of .268, with 172 home runs.

In 1948, when Robinson was with Cleveland, he had a role in one of the most memorable moments in baseball history: Ruth's final visit to Yankee Stadium.

The ailing slugger dressed one last time in his Yankee pinstripes, with his familiar No. 3 on the back, and walked onto the field from the Indians' dugout on June 13, 1948.

"He talked in a very raspy voice," Robinson told the Fort Worth Star-Telegram in 2016. "I could tell he needed some help. He was going to walk out to home plate without any crutches. I just reached into the bat rack and pulled out a bat and gave it to him."

(The bat belonged to Feller, the team's star pitcher.)

"He carried that bat up to home plate," Robinson recalled. "And that famous picture of him facing out with him standing with that bat - I got the bat and had him autograph it."

Nat Fein, a photographer for the New York Herald Tribune, stood behind Ruth, who looked across the diamond and steadied himself with the bat. Two months later, Ruth was dead.

Fein's enduring image was the first sports photograph to win the Pulitzer Prize.

William Edward Robinson was born Dec. 15, 1920, in Paris, Texas. His parents divorced when he was young, and he supported his mother by loading trucks before and after school.

He played on semipro baseball teams with adults when he was 16 and signed a professional contract in 1939 for $300, using the money to buy his mother a washing machine.

After a brief major league call-up in 1942, he spent part of his three-year naval service during World War II playing baseball. With the minor league Baltimore Orioles in 1946, Robinson edged out another star player - Jackie Robinson, who made history a year later as the first African American in modern major league baseball - as most valuable player of the Class AAA International League.

Robinson was one of baseball's last links to the era before the game expanded to California in the late 1950s. Teams traveled by train and developed a close sense of camaraderie: When he was with Cleveland in 1948, he was even part of a barbershop quartet.

"We'd sing anywhere, on Pullmans, buses, the clubhouse," he said in 1998. "We even sang during rain delays. We had great harmony."

He was active in the players' union for years and, long after becoming a front-office executive for various teams, was instrumental in improving pensions and other benefits for retired players.

In 1974, as general manager of the Atlanta Braves, Robinson traded an aging Hank Aaron - then baseball's all-time home run king - to the Milwaukee Brewers, for a sentimental return to the city where Aaron had enjoyed his greatest success.

After serving as general manager of the Texas Rangers from 1977 to 1982, Robinson worked as a scout for several teams until 2004. He published a memoir, "Lucky Me: My Sixty-five Years in Baseball," written with C. Paul Rogers III, in 2011.

Robinson's first marriage, to Elayne Elder, ended in divorce. He dated singer Patti Page in the 1950s before marrying Bette Farlow in 1955. Survivors include his wife, of Fort Worth; a son from his first marriage; and three sons from his second marriage.

In 1977, Robinson returned to his home state as general manager of the Texas Rangers. During spring training of his first year on the job, manager Frank Lucchesi benched infielder Lenny Randle in favor of another player.

An enraged Randle attacked the manager before a game, breaking his cheekbone and some ribs. Lucchesi spent several days in the hospital, and Randle was promptly traded.

Later that season, Robinson fired Lucchesi as manager because of the team's lackluster performance, hiring the pugnacious Eddie Stanky as his replacement. Stanky lasted just one game before returning home to Alabama.

After the dust settled - and Robinson ultimately hired Billy Hunter - the Rangers were led by four managers in eight days.

While the drama was unfolding, Robinson received a call from Berra, his former teammate on the Yankees.

"Yogi, what are you calling me for?" Robinson recalled years later to the Star-Telegram.

Berra was trying to congratulate Stanky on his new job, but his call was transferred to the wrong Eddie.

"Yogi, you won't believe this," Robinson said, "but Stanky just quit. You want the job?"

Without hesitating, Berra said, "Hell, no."