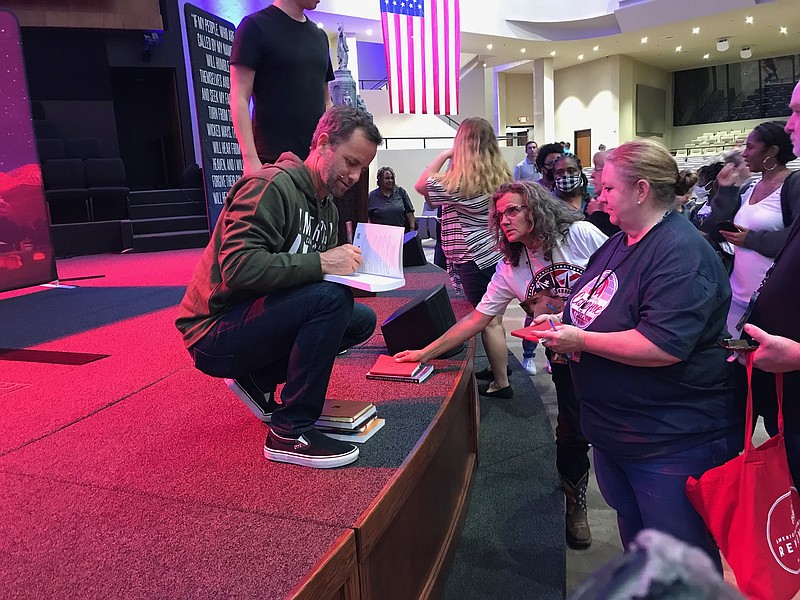 TEXARKANA, Texas -- In the the last 29 years, Kirk Cameron has come along way from playing a kid in the television comedy "Growing Pains," to now helping make sure that the unborn has a chance to live.

"My wife, Chelsea and I have have six children. Four of the them, Jack, Isabella, Anna and Luke, are adopted," Cameron, now a Evangelical Christian, said during Sunday's American Campfire Revival at First Baptist Church, Texarkana. "All four of them would have not been be here had their mothers not chosen life for them."

Along with being pro-life, Cameron spoke firmly about how the nation's founding fathers meant for the country to recognize God as sovereign and permanently victorious over evil forces prowling the the world.

"God will be here until His final victory is put through the goal posts," Cameron said. "You may think that the Christian culture will always be persecuted and things will get worse because Satan is in control, but God's shows throughout His book that he can work everything out to all things that are good. We can make things like going to work and raising families --all part of God's glory if we choose to -- but if we choose sin, we choose to suffer."

Cameron went on to say that God's gift of civility is all born out of proper church governance, family governance and self governance -- not from the principles Marxism.

"Having all three of these ways to govern, is how you get civility," he said. "A man who is truly liberated from sin, fights for what is right and he dresses in the full armor of God. A man like this becomes the defender of faith and he will educate his children and himself in a Biblical world view. This is something our Founding Fathers knew to be true and they knew the country could die if we ever lost sight of this. God is the one who invented civil government and people of faith must vote biblically. Our children are our future so craft education and educate those around you."

Cameron warned church goers to be wary of slipping into the trap of just "playing church," rather then taking it to heart.

"If you are just playing church, we need to return to God's word, because we can repent and start a new beginning."