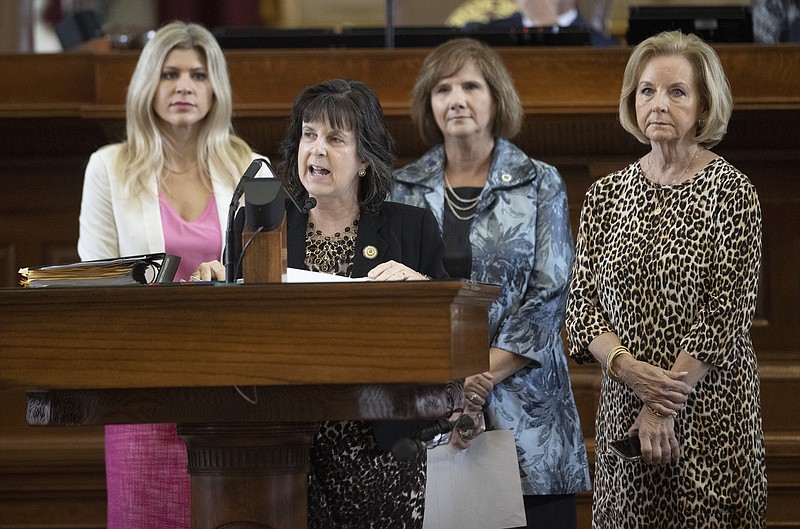 State Rep. Valoree Swanson, R-Spring, second from left, speaks in favor of House Bill 25, which she authored, that limits the participation of transgender athletes in public school sports, in the House Chamber at the Capitol in Austin, Texas, on Thursday Oct. 14, 2021. Behind her are state representatives Lacey Hull, R - Houston, left to right, Candy Noble, R - Lucas, and Geanie Morrison, R - Victoria. (Jay Janner /Austin American-Statesman via AP)

"Where is this coming from?" asked Rep. Ann Johnson, D-Houston. "Because we put on the record that there is not one case -- not one case -- of a trans girl taking a competitive spot from a female student in Texas."

But the bill's author, Rep. Valoree Swanson, R-Spring, and other Republicans insisted that the goal was to protect girls sports.

"I'm excited that we have the opportunity today to stand up for our daughters, our granddaughters and all our Texas girls," Swanson said, adding that HB 25 seeks to protect competitive fairness and safety for girls who might otherwise be forced to compete against "biological males" who are generally bigger, faster and stronger.

"We fought for this right, and now we have to defend it," she said.

Approved 76-54, HB 25 next goes to the Texas Senate, where fast approval is expected. Senators, also sharply divided along party lines, approved a similar measure last month, and Lt. Gov. Dan Patrick, who presides over the Senate, has made the transgender sports bill one of his top legislative priorities.

Gov. Greg Abbott also has endorsed the concept, adding the sports bill to the agenda of all three special sessions after Democrats blocked its passage in the regular session that ended in May.

HB 25 would require public school athletes to compete in sports based on the "biological sex" listed on their birth certificates.

Patrick and other Republicans insist the limitation is needed to counter a growing movement of inclusion for transgender people that threatens the fairness that is essential for school sports, potentially robbing girls of the benefits of athletics -- from learning teamwork and applying leadership skills to qualifying for college scholarships.

A parade of Democrats disputed that claim, saying supporters could point to no Texas athletes who lost a competition or a spot on a team to a transgender student.

Worse, they said, HB 25 amounted to state-sponsored bullying against a population that is too often singled out for exclusion and already reports high levels of anxiety, depression and suicidal thoughts.

"That's what we should be addressing, not some boogeyman threat to little girls that doesn't exist," said Rep. Gina Hinojosa, D-Austin.

In the first eight months of 2021, while bills targeting transgender Texans were being debated by the Legislature, more than 3,900 transgender youths called an LGBTQ-friendly crisis hotline -- up 150% from the year before, said Rep. Celia Israel, D-Austin.

"This bill is mean-spirited, inherently discriminatory and harms Texas children -- our children," said Rep. John Bucy III, D-Austin. "Being in youth sports changes lives, and this bill takes way that opportunity for trans kids in Texas."

Rep. Joe Moody, D-El Paso, said Republicans have had ample warning about the negative impact HB 25 has had, and will have, on transgender Texans.

"The bill was designed knowing these kids will be harmed, and that's a price that some are willing to pay for grown adults to score symbolic points, in a fight they chose, over a fiction. It is a sin what we are doing here today," Moody said.

Swanson disagreed. "We need a statewide level playing field. It's very important that we, who got elected to be here, protect our girls," she said.

HB 25 law would codify a statewide rule for public schools, adopted in 2016, that requires athletes to compete in sports based on the sex listed on their birth certificate, Swanson said. HB 25 would take the policy one step further, she added, by requiring birth certificates to have been issued "at or near their time of birth" -- disallowing amended documents that might be obtained by transgender students.

Rep. James Talarico, D-Round Rock, said that added step was unenforceable, taking an "immoral and hateful" bill and making it illogical as well.

Although HB 25 seeks to ban the use of amended or updated birth certificates that could reflect a student's gender transition, Talarico said amended certificates bear no designation that they were changed, making them indistinguishable from those issued "at or near" the time of birth.

"But the goal is not to enforce this legislation," Talarico said. "The goal is not to be able to assign students to a certain sports team. The goal is to ostracize kids who are already vulnerable in our community for political gain."

During the debate, Rep. Jon Rosenthal, D-Houston, described concerns about transgender athletes as a non-issue used "to gin up hate."

That drew a challenge from Rep. Tony Tinderholt, R-Arlington.

"The reason that we say that it's a non-issue, a made-up issue, that it's fabricated," Rosenthal replied, "is because there's no documented evidence in the state of Texas where a (transgender child) has ever taken away a scholarship or even a starting place on a team of any sport from a born female."

The Republican majority easily turned aside almost 20 Democratic amendments meant to effectively kill the bill or at least soften its impact.

The only Democrat to successfully amend HB 25 was Rep. Donna Howard of Austin, who wanted to make sure that a student athlete's personal medical information was protected from improper disclosure. The amendment easily passed after Rep. Tom Oliverson, R-Cypress and a physician, vouched for it with Howard at his side.