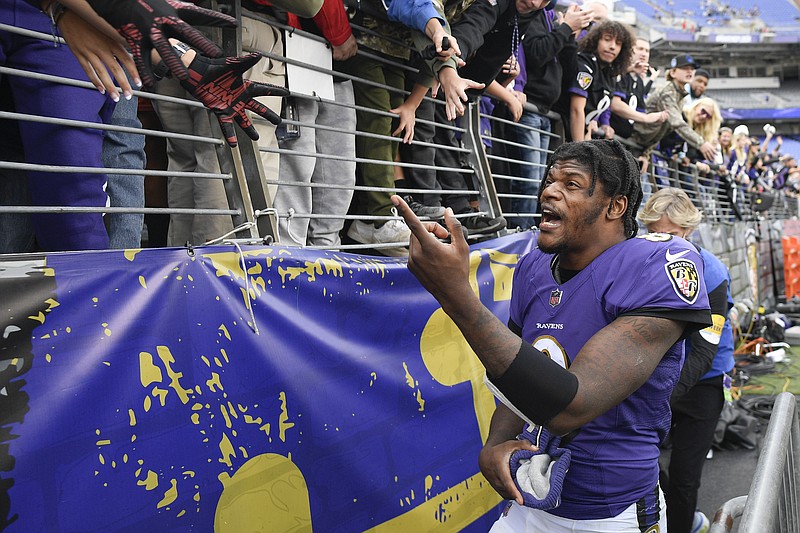 DENVER -- Derek Carr sliced up the Denver defense for 341 yards and two touchdowns, Maxx Crosby made three sacks and the Raiders started the post-Jon Gruden era with a victory.

The Raiders (4-2) gave longtime special teams coordinator Rich Bisaccia a win in his debut as interim head coach and offensive coordinator Greg Olson was masterful in his first play-calling duties for Las Vegas since Carr's rookie season in 2014.

The Raiders began by ending an 11-game streak without a score on their opening drive. They never let up, burning the Broncos' beleaguered secondary that couldn't keep up with Carr and his targets.

The Broncos (3-3) lost their third consecutive game, but the other defeats came at the hands of Ravens and Steelers and their veteran head coaches John Harbaugh and Mike Tomlin. This one had to sting coach Vic Fangio, whose Broncos have a short week before a Thursday night game at Cleveland with the possibility they'll fall below .500 just 25 days after starting 3-0.

BALTIMORE -- Lamar Jackson threw for 167 yards and a touchdown for Baltimore.

A week after scoring 47 points in a win over Cleveland, the Chargers (4-2) came up empty on their first five possessions and were held under 16 points for only the second time since drafting Herbert before last season.

Jackson went 19 of 27 with two interceptions. Herbert was 22 of 39 for 195 yards with a touchdown and an interception.

CLEVELAND -- Kyler Murray threw four touchdown passes as the Cardinals remained the NFL's only unbeaten team and continued their best start since 1974.

The Cardinals (6-0) built a 20-0 lead in the first half and kept their perfect record intact despite not having coach Kliff Kingsbury or star linebacker Chandler Jones, who both tested positive for COVID-19 this week.

Murray connected with DeAndre Hopkins for two TDs, and Arizona's shifty quarterback came up with a clutch play whenever the Cardinals needed one.

The Browns (3-3) have lost two straight under coach Kevin Stefanski for the first time.

Trevor Lawrence connected on a short slant pass to Laviska Shenault Jr. and the Jags (1-5) called a timeout with 1 second remaining after the Dolphins (1-5) gambled on a fourth-and-1 from their 46 and came up short.

Lawrence threw for 319 yards and a touchdown as he and coach Urban Meyer finally earned their first NFL victories -- even if it required a trip to Europe to get it done in a "home" game at Tottenham Hotspur Stadium.

The Dolphins lost their fifth consecutive game, spoiling the return of Tua Tagovailoa, who made his first start in a month. The second-year quarterback threw two touchdown passes to Jaylen Waddle.

Cousins threw for 373 yards and three touchdowns against the league's top-ranked pass defense, Dalvin Cook ran for 140 yards and a score and the Vikings finally solved their second-half offensive woes. Adam Thielen had a number of big catches, finishing with 11 receptions for 126 yards and a touchdown.

The Vikings (3-3) had not scored a second-half touchdown in their previous four games, but Cook broke the streak with a 16-yard touchdown run to give the Vikings the lead and Cousins added a 5-yard touchdown pass to Thielen.

But two missed field goals by Greg Joseph kept the Panthers (3-3) in it.

Sam Darnold finished 17 of 41 for 207 yards with one touchdown and two turnovers and nearly pulled off a wild comeback.

LANDOVER, Md. -- Patrick Mahomes threw for 397 yards and engineered three second-half touchdown drives to compensate for a pair of interceptions.

After throwing two picks before halftime, Mahomes connected with Tyreek Hill on a 2-yard touchdown pass late in the third quarter. He put the game out of reach with a 24-yarder to Demarcus Robinson with 3:14 left in the fourth period. In between, new starting running back Darrel Williams rushed for his second TD of the game to help Kansas City (3-3) avoid what would have been an embarrassing loss.

The defense also finally played its part, holding an opponent under 29 points for the first time this season, forcing a fumble and picking off Taylor Heinicke to seal the win. Washington (2-4) finished with 276 yards and its lowest points total of the season.

Unlike losses to the Ravens, Chargers and Bills, the KC offense made up for the giveaways. The Chiefs had touchdown drives of 95, 68, 45 and 96 yards.

CHICAGO -- Aaron Rodgers threw for two touchdowns and ran for another as the Packers (5-1) beat the Bears (3-3) for the 20th time in 23 games counting the playoffs and improved to 22-5 with Rodgers as the starter against Chicago.

Rodgers shook off a sluggish start, throwing a 1-yard touchdown to Allen Lazard in the second quarter and a 12-yarder to Aaron Jones in the third, making it 17-7.

Rodgers put away the Bears after Justin Fields threw a 5-yard touchdown to Darnell Mooney, cutting the lead to three with 8:44 left. He scored from the 6 to cap a 75-yard drive, bumping the lead back up to 10. He then turned toward the crowd and yelled, "I still own you! I still own you!"

EAST RUTHERFORD, N.J. -- Matthew Stafford threw three of his four touchdown passes in a 28-point second quarter. Stafford connected with prime target Cooper Kupp on scoring passes of 3 and 13 yards. He also found Robert Woods for a 15-yard score and running back Darrell Henderson on a 25-yarder.

Stafford, who has 16 TD passes in six games, finished 22 of 28 for 251 yards in three-plus quarters. The Rams (5-1) took advantage of two short fields provided by their defense for easy TDs in breaking the game open early against New York (1-5).

Kupp, who was tied for second in the league with 37 catches entering the game, added nine more receptions for 130 yards. Safety Taylor Rapp had two interceptions to account for half of Los Angeles' four takeaways.

A week after sustaining a concussion in a loss to Dallas, Daniel Jones started at quarterback for the Giants. He led the offense to a 27-yard field goal by Graham Gano on the opening series, but the Rams picked him off three times and recovered a fumble on a strip-sack by Ogbonnia Okoronkwo.

Detroit (0-6) could not rally as it did in closely contested setbacks against San Francisco, Baltimore and Minnesota, failing to score until Austin Seibert made a 35-yard field goal midway through the fourth quarter. The Lions are the NFL's only winless team under first-year coach Dan Campbell. They have lost 10 straight going back to last season for the league's longest active losing streak. 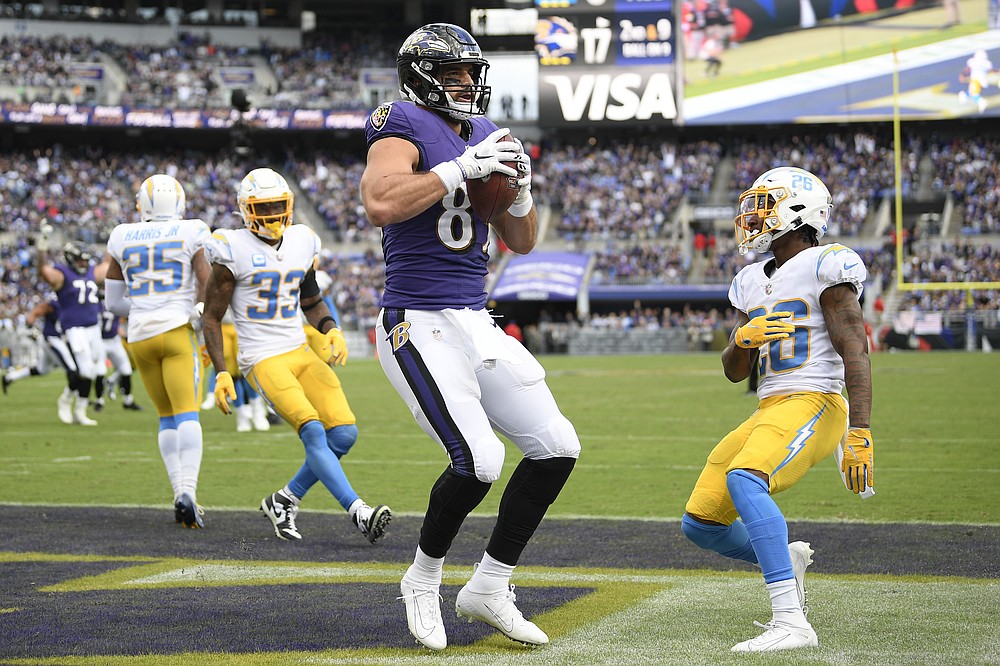 Baltimore Ravens tight end Mark Andrews, center, looks on after catching a touchdown pass from quarterback Lamar Jackson, not visible, during the second half of an NFL football game against the Los Angeles Chargers, Sunday, Oct. 17, 2021, in Baltimore. (AP Photo/Nick Wass) 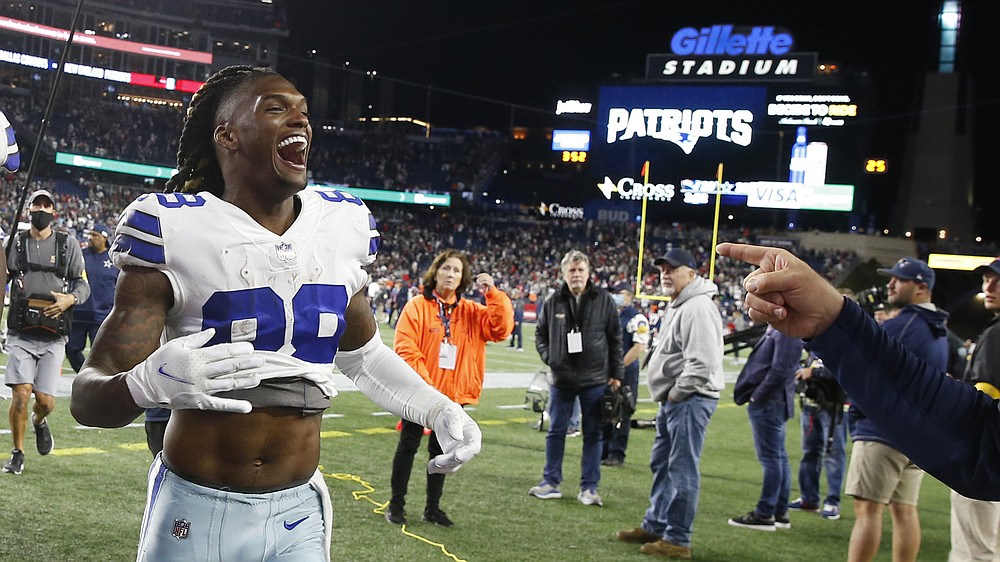