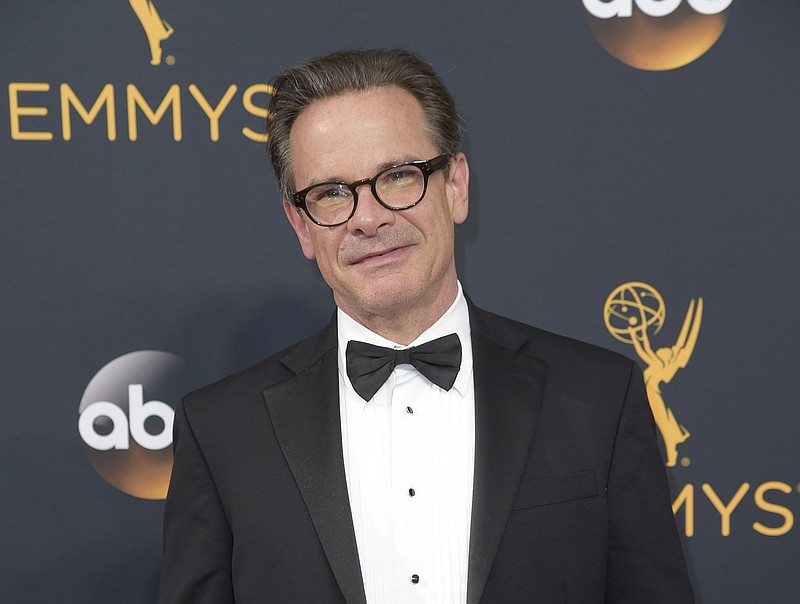 FILE - Peter Scolari arrives at the 68th Primetime Emmy Awards in Los Angeles on Sept. 18, 2016. Scolari, a versatile character actor whose television roles included a yuppie producer on “Newhart” and a closeted dad on “Girls” and who was on Broadway in “Hairspray” and “Wicked,” died Friday morning in New York after fighting cancer for two years, according to Ellen Lubin Sanitsky, his longtime manager. He was 66. (Photo by Richard Shotwell/Invision/AP, File)

Peter Scolari, the prolific actor who rose to fame on the TV show "Bosom Buddies" with longtime friend Tom Hanks and was nominated for three Emmy Awards for his role on "Newhart," died Friday. He was 66.

Scolari, who also starred in Hanks' films "That Thing You Do!" (1996) and "The Polar Express" (2004), died after battling cancer for two years, his spokeswoman, Ellen Lubin Sanitsky, told the Los Angeles Times. She did not specify what kind of cancer Scolari had.

From 1984 to 1990, Scolari played pretentious but likable TV producer Michael Harris on Bob Newhart's beloved CBS sitcom. Although he repeatedly missed out on the supporting actor Emmy for the role, Scolari ultimately won the award in 2016 for his guest role on Lena Dunham's HBO comedy "Girls." Scolari played Hannah Horvath's father, Tad, and became the first actor to win an Emmy as a "replacement nominee" when "Veep" actor Peter MacNicol was disqualified over a technicality.

"The only thing that matched his love for his family and his passion for acting was his love of being in service to others," his wife, Tracy Shayne, said in a statement provided by Sanitsky.

The New York-bred actor got his start in theater and spent seven years at the prestigious Colonnades Theatre Lab alongside Danny DeVito, Rhea Perlman and Jeff Goldblum.

"We were planning on becoming the national theater," he told the L.A. Times in 1991. He was a self-taught student of vaudeville, a professional juggler and an accomplished college athlete.

He also starred in the short-lived sitcoms "Family Album," "Dweebs" and the "Honey, I Shrunk the Kids: The TV Show," and did voice work for several animated children's series such as "Gargoyles," "Pinky and the Brain" and "Batman."

He and Hanks remained dear friends since their early days on the ABC comedy "Bosom Buddies," in which they played cross-dressing ad men who moved into an all-female apartment after their building was condemned. Scolari relocated to L.A. from New York for the part.

The show flopped with critics and viewers and went off the air in 1982 but has since become a cult favorite.

"We did some of our best work in drag, but that's because you put two guys, who are as serious about their work as Hanks and I are, in dresses and wigs and Joan Crawford hurt-me pumps and we're going to go after it in the most aggressive way possible."

After that, Hanks' career took off and he won two Oscars. Scolari did a few films but worked mostly on sitcoms and reteamed with Hanks a few times.

"It's a distant second to me to talk about our professional relationship and what we do as actors to where we are as friends," Scolari said of Hanks in 1996. "We have been through a lot. We have seen each other go through quite a number of changes and dramas and tribulations."

However, the comparisons to Hanks dogged him throughout his career.

"Oh, there have been moments when I've been irritated and offended," Scolari told the L.A. Times in 1995. "I remember when it became an issue, this almost forced comparison between me and Tom. He'd done 'Big' and was on the cover of Time and all this, and we were out golfing together one day and I said, 'Gee, thanks, pal of mine. Now I go anywhere and everyone says, 'Wow, Tom's got an Academy Award nomination for a comedic role, and you're just on "Newhart."'"

After Newhart, Scolari began concentrating on dramatic television roles to reestablish himself as an actor to be taken seriously.

"The shyest extrovert, the most dramatic comedian, the most humble icon. You had lived enough life to know that a TV show was just a TV show, but also to appreciate just what it meant to be allowed to play pretend for a living- and you never let us forget that this job was a privilege," "Girls" creator and star Dunham wrote Friday on Instagram.

"Becky Ann [Baker] and I loved every second of playing your family and I couldn't have been raised up by a better TV 'papa,'" Dunham added. "Thank you, Scolari, for every chat between set ups, every hug onscreen and off and every 'Oh, Jeez.' We will miss you so much."

"We knew this was coming. Doesn't make it easier. RIP, Peter my friend," McKean wrote.

Scolari is survived by his wife and four children, Nicholas, Joseph, Keaton and Cali.