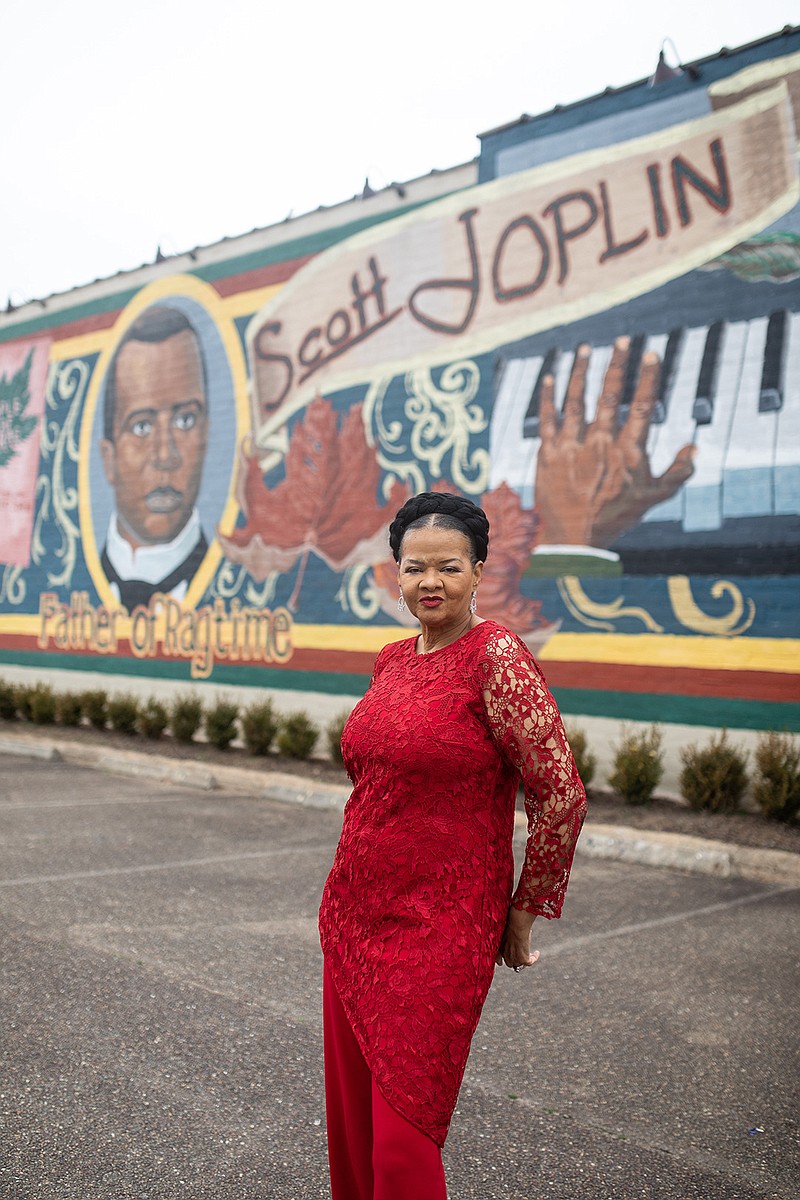 Carol Collins-Miles poses in front on the Scott Joplin mural in downtown Texarkana earlier this year. Carol says promoting Texarkana and music from Texarkana is important to her.

Texarkana chanteuse Carol Collins-Miles not only has high society fashion experience, but she can also belt out a song with a jazzy, stage-worthy style and panache.

Under her stage name Carol Miles, she's soon to release a five-song EP of numbers that hold special significance for her. Titled "Givenchy & Me," the release will be available on CD Baby at the start of September.

Her short album, the first of two she plans to release, will include the title number in two versions (a long version and a shorter version). In it, she pays homage to famous designer Hubert de Givenchy, for whom she worked as one of his house models in Paris, one member of his Black Cabine of Givenchy, as she put it.

Other selections include "On a Little Street in Singapore," her own composition titled "Texarkana Cutie" and the bonus number "Christmas in Paris." Two numbers are written in English and French.

"I feel wonderful. During the late '80s and '90s while I was still modeling, I was known as a model that sings because I would pantomime on stage and I released work with a producer, three albums while I was in Europe," Carol said.

She said this time it's unusual because she's been working on Scott Joplin numbers and singing jazz, but she also wrote a song called "Swampoodle Express," which will be used in an upcoming John Tennison film. When she went to a studio to record it, it gave her the idea of recording more music.

"I just decided to work it at home and do all the music myself," Carol said about composing these two concept albums. She's been recording them since May at a downtown Texarkana studio, Bruce Aaron's Prosper Recordz. "I'm really happy to work with him," Carol said. "He's very very young, and this is very important," she said about the collaboration.

Carol said promoting Texarkana and music from Texarkana is important to her. "We have so many talented people here," she said.

She intends to release a second album of seven to nine songs next year. That album will pay tribute to Texarkana.

She'll also perform a few of these numbers live soon, such as "On the Texarkana Trail of Joplin" at a Scott Joplin birthday celebration in Texarkana on Nov. 6.

She has several other dates lined up before then, including one in New York City, produced by an arts and fashion designer there.

She's excited to share her music at these special events, and in some respect, is continuing a family tradition with music. Her parents sang gospel music with her older sister Gloria playing organ for them, she said. "They taught music, taught voice, so I've always been about music."