HER | Local caterer Marjorie Slimer will serve up a restaurant soon 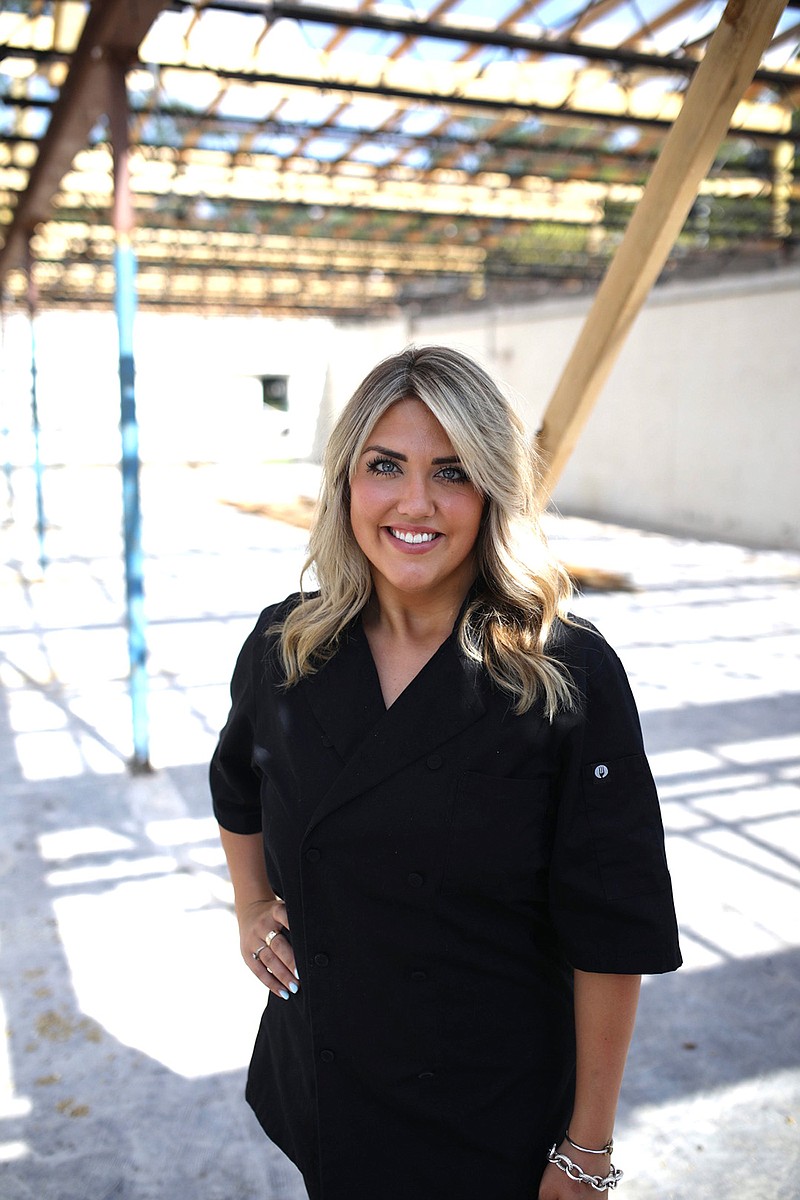 Chef and business owner Marjorie Slimer stands at the scene of her future restaurant, Franklin's Kitchen + Catering, which will be on Texas Boulevard.

When Marjorie Slimer thinks back on her inspiration to cook, she considers her grandmother and the pies they made together. For Marjorie, the chef's life is a family affair, whether baking with her grandma Sarah or cooking with parents. With those roots in mind, she's about to make a big leap forward.

Under the names Marj is Munchin and Slice of Slimer, she's been catering and serving as a private chef locally for a few years. She will soon create culinary magic in a bigger kitchen and open her own storefront next door to Merchant House on Texas Boulevard: Franklin's Kitchen + Catering, a name that has a family connection.

"I originally started out in high school making pies with my grandma, which was something fun for us to do together. And then within the year it got pretty popular," Slimer recalled.

She grew up cooking with her whole family. She loved her dad's steaks, so much so she won't order one at a restaurant. Her mom's Caesar salad was a favorite; she'll put it on the menu at Franklin's. Pesto pasta was served, too.

Pies were a way for her to make extra cash back then, starting with a bunch of family recipes.

"I used my great-grandmother's pie crust recipe, so that was really fun," Slimer recalled, noting she ventured to Texas Christian University to study entrepreneurial management. She didn't love it, but she kept quiet about that.

"And then Christmas break of my freshman year of college, my mom and I were just driving around. She was like, 'Hey, by the way, I've been looking at culinary schools for you,'" Slimer said. Her mom sensed her daughter was unhappy. Fast forward to having a deposit put down at a cooking school in Fort Worth, Texas, but locals kept bugging her to consider Texarkana College's culinary program. Ultimately, that's where she felt most at home, here in the city she calls home. "I was like, OK, I'll just look at it just for them. And then I ended up really liking it. I really liked the chef there, chef Sheila Lynn," Slimer said. "I really clicked with her."

In October 2018, she cooked up her first catering event, a pre-party for a high school reunion, fixing a full spread of nine heavy appetizers for 60 people.

"It was a lot of food. I remember I did beef tenderloin, boiled shrimp, smoked salmon flatbread. I make these little cream cheese pecan rolled olives. I'm pretty sure I did those. A charcuterie board. A bunch of stuff," Slimer recalled. Family pitched in. "It was pretty crazy, but I pulled it off."

She hasn't stopped since

"A lot of people will be having a little get-together and they don't want to do anything, so I just come in and set up the meal and leave," Slimer said. She'll make a full dinner at people's homes, which she can cook right in front of them, serving them all the courses.

How does Slimer make it work? Well, she's learned from her slip-ups as she's gone along. She recalls one unsavory incident with green bean juice and a 45-minute drive. Time management is key in situations where food like stuffed peppers and chicken cook in the oven at the same time. Keep everything warm and safe while transporting.

What's a big hit? It depends on the theme. That tenderloin is popular for occasions like cocktail parties and dinner parties.

"That's usually one of the first things to go. I serve tenderloin bits on little skewers."

People text her on the fly asking if she has meals available.

"My smoked chicken green chile enchiladas are a big hit, too," Slimer said.

As to the restaurant

She plans to open within the year. COVID pushed back her plans, but good changes came about in the interim. She found a business partner and decided to add a patio.

Franklin's Kitchen + Catering will be at 3216 Texas Blvd. near College Drive.

Franklin was her grandfather's middle name, the husband of the grandma with whom she made the pies. She recalled making omelettes for him the morning after they had spaghetti and a sleepover.

"I would put literally anything in the omelette," she said. "I would put the leftover spaghetti, crushed-up Cheez-Its, mustard. It was gross, but he would eat it all and praise her cooking."

She's come a long way since then.

"I just think you've got to get into it and don't be scared to fail," Slimer said. "Don't worry about what others are going to think about you and do what makes you happy."