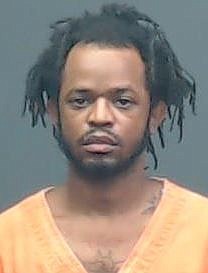 TEXARKANA, Texas -- The alleged discovery of a loaded firearm and a growing operation for hallucinogenic mushrooms in a Texarkana, Texas, house earlier this month has led to felony charges for a Texarkana man.

Adriene Hamilton, 28, allegedly left three children, ages 12, 6 and 4, alone for about an hour in a house in the 1200 block of West Sixth Street the night of Sept. 2, according to a probable cause affidavit. Hamilton was allegedly watching the youngsters while their mother was out of town at a job training program.

Police and fire personnel were called to the house about 9:30 p.m. by a neighbor who reported that the 12-year-old told her that "their house was on fire because she lit a candle." The 12-year-old told police that she lit the candle "because there weren't any lights inside and they were scared."

The candle broke, leading the child to conclude the house was on fire and to seek help from the neighbor.

The affidavit does not state whether the house had no electricity.

When they entered, police and fire allegedly found a broken candle sitting on a shelf near the kitchen and living room area. Near the candle, officers allegedly found a "firearm sitting there with a magazine in it."

As officers and fire personnel surveyed the house looking for potential fire, they noticed a large number of containers filled with "planting soil" with mushrooms growing inside.

While officers were at the house, Hamilton allegedly drove by without stopping. Officers stopped Hamilton in the 600 block of Leila Street and arrested him. An empty container like the ones found in the house was allegedly found in the backseat.

The children were placed in the custody of a relative.

Hamilton has been charged with three counts of child endangerment and two counts of possession of a controlled substance. Bails on the charges total $250,000.