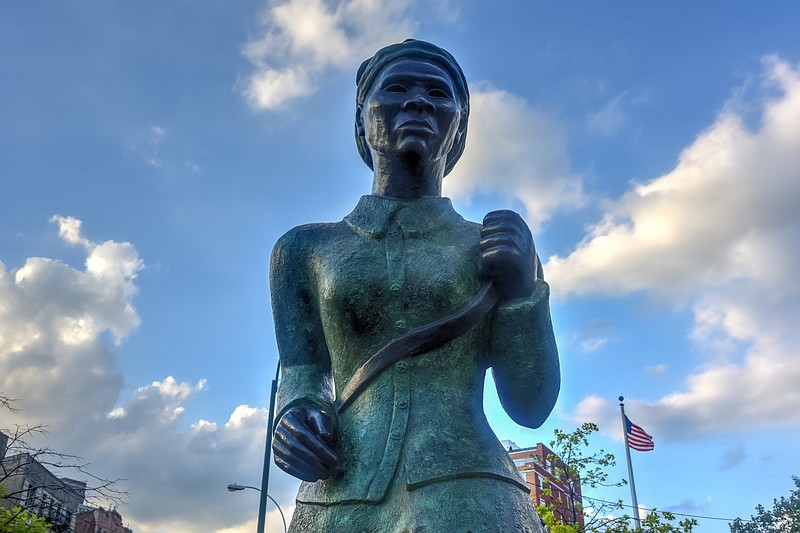 The wind was whipping, and the sun was still bright when Ken Johnston and Deborah Price started a 165-mile "Walk to Freedom" from the beach at Cape May, New Jersey, at the Sunset Pavilion Saturday afternoon.

They are walking to Burlington, New Jersey, in a "segment-walk" over the next several weekends and expect to finish by May 8.

"The goal is to resurrect the voices and memories of the people who history has forgotten, and to recognize the families that were separated and reunited by their love for each other and their quest for freedom," said Johnston, who lives in West Philadelphia, near Cobbs Creek.

Johnston, 60, has completed several long-distance walks over the last five years. His first walk in 2017 in Massachusetts where he once lived, was for health and personal reasons.

In 2018, he completed a 400-mile solo trip from Selma to Memphis, to commemorate the 50th anniversary of the assassination of the Rev. Dr. Martin Luther King Jr. It was his first "Walk to Freedom" march.

In 2019, he walked 71 miles across Northern Ireland, from Belfast to Derry, commemorating the 1969 "People's Democracy March."

And at Christmas 2019, he began an earlier walk following Harriet Tubman's journey from Maryland to Philadelphia. Because of COVID-19, he did not complete his walk to Harlem in New York until 2021.

Johnston embarked on the latest walk to honor Tubman because this year marks the bicentennial anniversary of her birth in March 1822.

They will follow the general routes of people who were "freedom seekers," not "runaway slaves," as most historians have called those fleeing from captivity.

But Johnston said he also wanted to call attention to the people whose names and stories are not remembered as much as Tubman's.

For instance, their walk will include stops by the Peter Mott House in Lawnside, where Mott, a free Black American preacher, and his wife, Eliza, gave shelter to freedom seekers.

They will also stop by Jacob's Chapel African Methodist Episcopal Church in Mount Laurel, and at the historic Timbuctoo Village, where free and formerly enslaved people formed a Black settlement in 1826.

There will also be visits to sites in Salem and Elsinboro Township in Salem County and Greenwich, including Springtown, in Cumberland County.

Johnston said there were abolition activists, free Black men and women, Quakers and Native Americans who provided shelter and food to those escaping slavery.

People can keep up with the 165-journey by visiting Johnston's "Our Walk to Freedom" blog, at ourwalktofreedom.com/blog/.

There is evidence that freedom seekers from Maryland crossed the Delaware Bay and landed at the beach near Sunset Pavilion.

But there is no evidence that Harriet Tubman crossed the bay with them, said Cynthia Mullock, the executive director of the Harriet Tubman Museum in Cape May.

"We do have evidence that she was working here in 1852 as a domestic worker and cook for families and hotels."

It was more likely that Tubman worked most closely with Philadelphia-based abolitionists, such as Stephen Smith, a wealthy lumber company owner, who had a summer house in the beach town, across the street from the current Harriet Tubman Museum, at 632 Lafayette St.

Mullock said that although Tubman may not have crossed the bay -- something that some historians have not ruled out -- it is more likely that Tubman and other abolitionists helped those who did land at Sunset Pavilion beach to make their way north through New Jersey and on to New York or Canada.

At the Harriet Tubman Museum, Johnston and Price were joined by two other walkers, Rebecca Perrone, a Willingboro City Council member and William Calvin, her fiance.

They left the museum by 6 p.m. Saturday for the hard part of the 15-mile journey to Cape May Court House.

An Inquirer reporter found them along Route 9 heading north about 8 p.m. It was dark and traffic whizzed by.

They didn't arrive in Cape May Court House until about 11:30 p.m. Saturday, Johnston said Sunday.

Johnston said the first leg of the 165-mile trip from Cape May is the only segment that was scheduled to be conducted at night.

Just three months ago, Johnston and Price, who lives in Willingboro, were strangers.

They met when Johnston, who works in human resources, visited the Underground Railroad Museum in Eastampton, near Mount Holly, to research his South Jersey walk.

Price, 65, who has worked as a bank examiner and regulator, volunteers at the Underground Railroad Museum.

Price was so intrigued as Johnston described his plans that he invited her to come along.

On Sunday morning, Price and Johnston started out from Cape May Court House with the sky overcast and a few sprinkles of rain. They were joined later by Perrone and Calvin, who caught up with them while they were stopping to talk to people along the way.

As they began walking Sunday, they decided to walk only eight miles to Dennisville, rather than the previously announced 15-mile destination to Delmont, N.J.

From the road, as they approached Route 47, Price said, "This walk is becoming very therapeutic for me. We are looking at the environment, looking at the greenery that's out here. The color of the muddy waters."

"It's been beautiful," she said. "People have been supporting us by flashing their lights, or stopping to talk with Ken."

They met one woman picking dandelions who talked with them about the walk.

For Price, the walk meant reflecting on how the past, the meaning of the walk to freedom by people who had been enslaved, has meaning for news of today.

"I found myself not only think about Harriet, but a lot of the folks who are on the same mission trying to get freedom today.