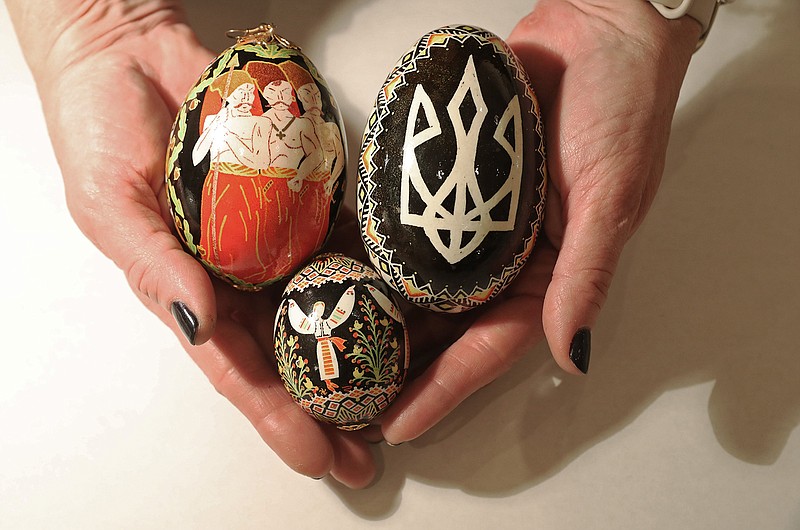 Artist Anna Chychula displays a collection of her Ukrainian pysanky eggs during a workshop at the Ukrainian National Museum on March 26, 2022, in Chicago. (John J. Kim/Chicago Tribune/TNS)

CHICAGO -- Maria Fedachtchin's fingers trembled a bit as she etched the first intricate lines of beeswax along the smooth, unblemished shell of an egg cradled in her palm.

She's learning to design pysanky, the ornately decorated traditional Easter eggs of Ukraine, where the 60-year-old was born and lived until her 1991 immigration to Chicago.

But her focus was rattled by news that Russian rockets had just struck her hometown of Lviv in western Ukraine, the area where her parents, sister and other loved ones still reside.

"My hands are shaking right now," she said, periodically glancing at her phone, hoping for text messages from relatives or news alerts. "You don't know what can happen at any moment."

Fedachtchin was one of about a dozen women attending a recent pysanky workshop at the Ukrainian National Museum in Chicago. The tenor of the room was solemn, in contrast to the brightly colored eggs on display around the museum, showcasing the artwork of different regions of Ukraine as well as various historical periods.

The class started about a half-hour after back-to-back airstrikes hit Lviv, a historical cultural center of Ukraine and, more recently, a haven near the Polish border for Ukrainians evacuating following the full-scale Russian invasion that began in late February.

Several workshop participants had spoken to relatives overseas and learned they were safe; others were still awaiting calls.

Artist and instructor Anna Chychula began the class by recounting one of the many legends surrounding pysanky: There is said to be an evil monster shackled to a cliff and each Easter egg -- singular pysanka -- creates another link in the chain that binds him. The fate of the world depends on the survival of these fragile eggs, according to ancient lore, or the beast will be unleashed upon the world.

Today, this mythical monster is widely believed to be embodied in Russian President Vladimir Putin, whose war on Ukraine continues in its sixth week.

"So you're doing very important, beautiful work today," said Chychula, whose pysanky have previously been featured at the Art Institute of Chicago and currently at the Field Museum. "Make the chain stronger. Know that you are making a difference. Because a pysanka is a hope. It is a prayer. It is a wish."

The war has ignited waves of egg decorating around the globe, from church groups to classes to pysanky fundraisers, with the proceeds from egg sales helping Ukraine relief efforts. The Facebook page Pysanky for Ukraine has more than 8,000 followers worldwide, many posting photos of their own eggs along with words of encouragement for those threatened or displaced by the war.

"This beautiful Ukrainian tradition was passed down to me from my maternal grandparents," one woman from Indiana posted on the site, with a half-dozen images of her pysanky. "Prayers for peace to my family, and all families, still in Ukraine."

"I'm from Ukraine," wrote another woman, who lives in Khmelnytskyi in the western part of the nation. "Tonight the Russians fired on the city where I live. Firefighters put out the fire all night. ... I am sure we will defeat evil. This Easter egg tells the world: The sun of Ukraine will rise! We will overcome the darkness!"

As Fedachtchin dipped her egg in yellow dye, she said her hand was growing increasingly steady, the artwork absorbing some of her concentration and worry. The painstaking technique becomes easier with time and practice, she said.

Her niece, who has small children, had already fled to Poland. Other relatives remained in Lviv, volunteering at night to help pick up refugees at the train station and caring for those displaced by the war.

Her mother and father are in their 80s and don't want to leave their home, which is a few miles outside of Lviv.

As airstrikes racked the city, her mom spoke of gardening and washing the windows, to ready their house for Easter.

Fedachtchin and her sister had laughed, wryly: If an explosion were to shatter the windows, they asked, would it matter if the glass was clean or not?

"Life has to go on, no matter what," Fedachtchin said. "Because everything is crazy. Sometimes I want to wake up and say this is not real. How can it happen in the 21st century? It's unbelievable."

The word pysanka comes from the Ukrainian verb "to write," as the designs aren't painted on the egg but instead are written in beeswax.

The artform uses a wax-resist method: Molten wax is applied to the shell of a raw egg with a traditional stylus called a kistka; the writing tool has a reservoir that's filled with beeswax, which flows when heated under the flame of a candle.

The egg is then immersed in dye, with the wax protecting the covered portion of the egg from absorbing the color. The artist repeats the process, writing more wax motifs and submerging the egg in different colors.

Her parents were born in Ukraine but taken to Germany as forced labor during World War II, meeting in a camp for displaced persons. They immigrated to the United States as refugees, narrowly avoiding a return to the Soviet Union, where repatriated laborers were suspected of disloyalty and often killed or sent to concentration camps.

Chychula was born in Chicago but raised with a strong sense of Ukrainian identity, embracing her ancestral homeland's history, culture and traditions.

"I grew up loving a country that I didn't know would ever be independent or I would ever visit," she said.

Pysanky have been a part of Ukrainian heritage for centuries. An exhibit on Easter eggs at the Ukrainian National Museum explains that earlier in history, natural dyes were used, such as red coloring derived from logwood, yellow from apple tree bark and black from old walnut or oak bark.

While the artform originated in pagan times, it was later intertwined with religion when Ukraine accepted Christianity in 988 A.D. Pysanky were traditionally written during the last week of Lent by women of the family, who would gather, pray, and use patterns and colors typically handed down from mother to daughter for generations, Chychula said.

But the ancient craft -- rooted in cultural identity and Christian theology -- was prohibited during Communism. Pysanka artifacts were taken out of museums and in some cases destroyed.

"Religion was forbidden," Chychula said. "Cultural identity was forbidden. All of those things that were unique to you as a Ukrainian ... were just suppressed. You were just a good Soviet citizen."

She learned to cherish the cultural practices and artforms of Ukraine, so they wouldn't be lost.

"That's my legacy," she said. "Part of what I'm supposed to be is be a good steward of all of this inherited beauty and history and art and culture."

In 1991 Ukraine gained its independence, and her family rejoiced. She recalled visiting Ukraine with her mother and father in 1993, and proudly shows a photo of the three of them at a Ukrainian museum, standing in front of shelves of pysanky.

Today, one of Chychula's pysanka is on display in the main hall of the Field Museum. The design is divided into a pattern of 40 triangles and includes traditional Ukrainian symbols of healing and resilience.

These themes are "even more powerful today as the Ukrainian people fight back against Russia's invasion," the museum posted on Twitter last month.

Chychula's parents passed away about a decade ago. If they were alive today, the ongoing war would devastate them, she believes.

To see Ukraine fighting once again for its sovereignty would be so painful, she said.

"Sadly, this is a repeat of history," she said. "This has happened so many times previously. Ukraine will not give up. They just won't."

'Coming through the dark'

The egg is dipped in progressively darker shades of dye, and each color can convey different meaning, Chychula said.

The wax is later melted off the egg, unveiling a multicolored and unique pattern.

"There's some symbolism there, too," Chychula said. "Coming through the dark. Death into life. Spring. Rebirth."

Natalie Wroble, 69, of west suburban Glen Ellyn, hadn't written a pysanka in decades until the workshop. For her, the class was a chance to reconnect to her Ukrainian heritage.

Her parents had lived about an hour or so outside of Lviv but fled to escape Stalin's regime, immigrating to the United States in 1949. They traveled by train to Hungary, taking only a small suitcase each.

"I remember them telling me they had one pot that they took with them and two spoons," she said.

Her father had urged his sister to come with them, but she wouldn't leave.

"She ended up being taken by the Soviets to Siberia and her husband was tortured to death," Wroble said. "So my parents were the only ones that got out."

The experience was traumatizing to her parents, particularly her father, who grappled with fear and anxiety long after he was safe, Wroble recalled. There were so many losses they had to endure, even as they rebuilt their lives here, she said.

She worries about the long-term emotional consequences for those fleeing Ukraine today. More than 4 million refugees are estimated to have evacuated the nation since Feb. 24, according to the United Nations Refugee Agency.

"This is not something that will end when the war ends," she said. "This was something I never thought would happen again, in my lifetime, anyway."

As Lviv scrambles to help evacuate Ukrainians to safety, the war has also forced the city to urgently preserve its artwork and culture. Museums there have raced to move their artifacts underground, to protect them from becoming casualties of Russian bombs.

Now those museum walls and exhibits are empty, devoid of the paintings, statues, rare books and religious icons that once shared the story of Ukraine.

"This is our cultural identity," Chychula said. "We have to have our humanity, our connections to the past."