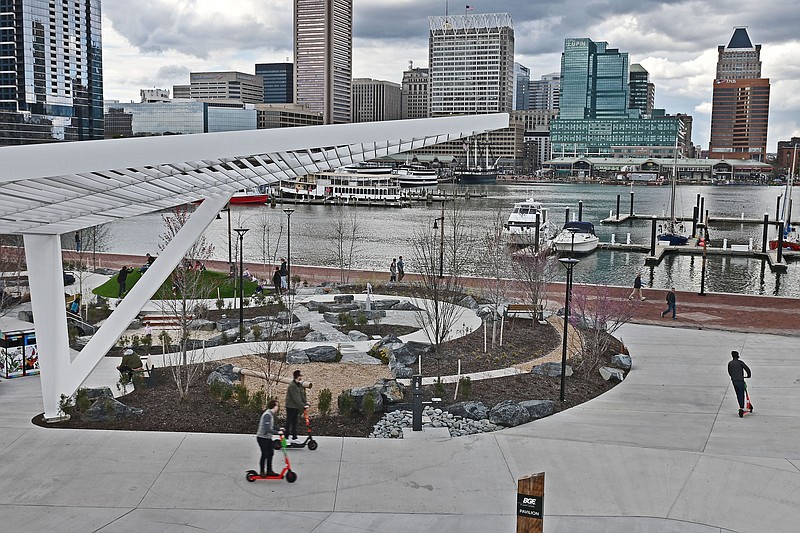 After Rash Field was turned into a skate park and playground, Baltimore residents are hoping the new ownership of Harborplace will redevelop the two pavilions to revive the Inner Harbor, here on April 9, 2022. (Kenneth K. Lam/Baltimore Sun/TNS)

BALTIMORE -- When he bikes around Baltimore's Inner Harbor or walks the promenade with his infant daughter, Ermias Abbai wonders about the emptiness at Harborplace and often imagines what it could become.

He said it has occurred to him during those long walks that it would be great to hop onto a sky lift and soar across the water, maybe from the northern shore to Federal Hill. The Pigtown resident sees the ambitious idea as one that "will pay for itself."

"I've visited places and they always have something you remember," said Abbai, 45, who has done work at the Inner Harbor as a radio frequency engineer for Comcast. "I've seen when Harborplace was very, very busy. I've always wondered why it's slowing down."

With news that Baltimore developer P. David Bramble plans to acquire Harborplace out of court-ordered receivership, Abbai and others have more reason these days to envision a new chapter for the faded "festival marketplace." A finalized sale would pave the way for redevelopment to, as Bramble put it, "completely re-imagine" the struggling onetime centerpiece of Baltimore's downtown renaissance in the 1980s.

For many, news of pending ownership by Bramble and his MCB Real Estate firm has renewed optimism about the fate of the aging attraction and downtown's core. Harborplace fell on hard times even before the pandemic, with many blaming mismanagement, loss of tenants, changing consumer habits and concerns about city crime. The center's New York owner failed to deliver on promised renovations and eventually defaulted on its loan for the property.

It's come as welcome news to many that Bramble wants to start with a "massive" and "comprehensive" community engagement and design process before finalizing redevelopment plans.

People who live, work nearby or visit from afar and those who look back fondly on Harborplace all seem to have a ready wish list of amenities, activities and services they'd like to see. Ideas are flowing about what could come next to enliven the once-vibrant center, where visionary developer James Rouse pioneered the festival marketplace concept.

Many envision a gathering place that draws visitors year-round, not just during big events. Most say water access and views must be preserved. All want a space that's clean, safe and welcoming, with calls for city officials to take steps to make it secure.

"People are still coming to the Inner Harbor just to see the water," said Sue Carlin, a downtown resident who said she bought the Water Street condo she first rented in 2014 because she loved living there.

Besides locally owned shops and eateries, residents and others said ideas to consider could include a microbrewery, pop-up marketplaces, outdoor performances and space for strolling, jogging, biking, ice skating, mini golf or a sandlot. A high-profile attraction -- a Ferris wheel or a sky lift -- would draw visitors and locals alike and set Baltimore apart, others say.

Space and possibly incentives should be available to bring in small, hyperlocal retailers that can grow, many say.

"Baltimore loves Baltimore businesses," said Andrew Hinton, president of the City Center Residents Association. "It doesn't have to be all national brands. ... It's not just what you can buy at the place, but how you can have a good experience there."

Carlin, who also works downtown as an executive assistant at Wexford Science & Technology, would like to see additional retail options for people who live downtown. And she'd welcome more green space.

"There's a lot of dog walking," she said. And "we just need more retail and more places that are available for residents after dark and on weekends ... if you want to go out for an ice cream or to a deli."

She likes the idea of a beer hall featuring Baltimore breweries and distilleries and hopes a grocer such as a Trader Joe's would move in nearby. Residents are happy with the redevelopment of Rash Field Park on the south side of the harbor and "want to see more of that," Carlin said.

Beyond Harborplace, revitalization should include efforts by the city to improve walkability and public transit that could help link neighborhoods, some said.

"This design process is so important and really the crux of the entire thing," Hinton said. "They need to get ideas directly from people using it on the tourism side and on the residential side."

Redevelopment offers a chance for the pavilions to be replaced with updated structures that make a stronger connection to the waterfront, said Lisa R. Hodges-Hiken, executive director of the Westport Community Economic Development Corp.

Patrons and visitors should be able to learn about the site's history, she said. Incubator space for small shops and eateries or a maker space should be a given, she said. Cultural institutions from city neighborhoods could "bring their presence to the harbor" through special events.

"Let's lean in to the thing that makes us quirky and special," Hodges-Hiken said.

It may be time to return to some form of food hall anchored by restaurants, which had been part of the Light Street pavilion's original design and has become a popular concept again, she said.

Hodges-Hiken worked part-time years ago as a waitress at original Harborplace tenant American Cafe. In those days, the retail center was "where the kids wanted to work," she said. "It was the hot place to work."

Dennis Ofori, who has run Crystal Cove women's accessories shop at Harborplace for two decades and also runs the Crystal Visions sunglasses kiosk, said a mix of local and national brands can work. He attributes much of his shops' survival during slower times to business drawn by remaining anchors: a Cheesecake Factory restaurant and an IT'SUGAR candy store.

He hopes to see more restaurants and pop-up events such as Christmas Village. The holiday market at West Shore Park, between the Baltimore Visitor Center and the Maryland Science Center, always attracts visitors.

"Having a regional destination that will pull people from outside the area is appealing," to keep visitors in town longer exploring other parts of the city, said Kristin Speaker, executive director of Charles Street Development Corp.

As a resident of the Riverside neighborhood, she said, "I like places that combine food and outdoor activity, things like ice skating or mini golf. Those are the things we love to do as a family and tend to do out of town."

Much of the vibrancy that Rosalind Heid found at Harborplace when she first moved to an Inner Harbor condo in the late 1980s has faded, she said. She recently walked through the Light Street pavilion and was shocked at the vacancies. Heid is hoping redevelopment could incorporate local food vendors and pop-up craft shops.

But she and others say the city needs to bolster any new plans with a tougher approach to what she called a "sense of lawlessness."

There's been an increase in confrontations with panhandlers and squeegee kids, as well as shoplifters, she said. Recently, she watched from her apartment window as cars below blocked a busy intersection, spinning doughnuts, as part of a "street takeover."

Of Bramble's firm, Heid said, "it's wonderful for them to come in there and do this. But they've got to get the city behind them."

Others say safety kiosks or safety-related phone apps might be a way to offer added security.

Gia Fracassetti, owner of Cafe Gia in Little Italy, where she lives, said she used to frequent Harborplace more with her children, now 13 and 9. They'd shop at places such as the now-closed Urban Outfitters and watch jugglers and magicians perform outside.

"The Inner Harbor is the hub of Baltimore, the main area for tourists and out-of-towners," Fracassetti said. "But ... locals have gotten disenchanted with going over for various reasons. ... It's just a beautiful part of the city and a shame that it was declining for so many years."

Finally, it appears that things could begin to happen, she said, perhaps with the addition of more locally owned businesses and restaurants.

With Bramble, she said, she anticipates the retail complex will be in "good hands, and they will do something sound that appeals to locals as well as to visitors." 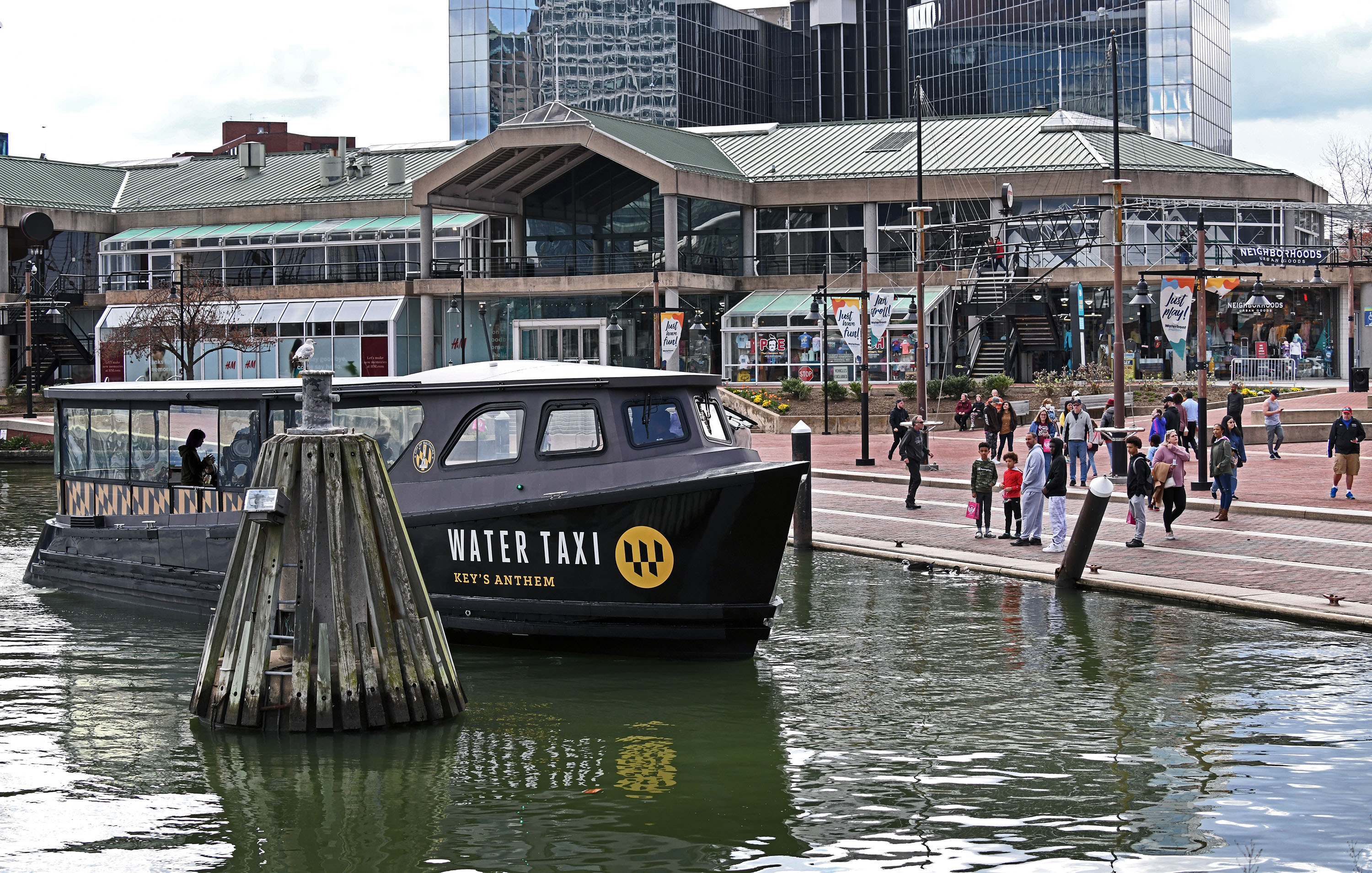 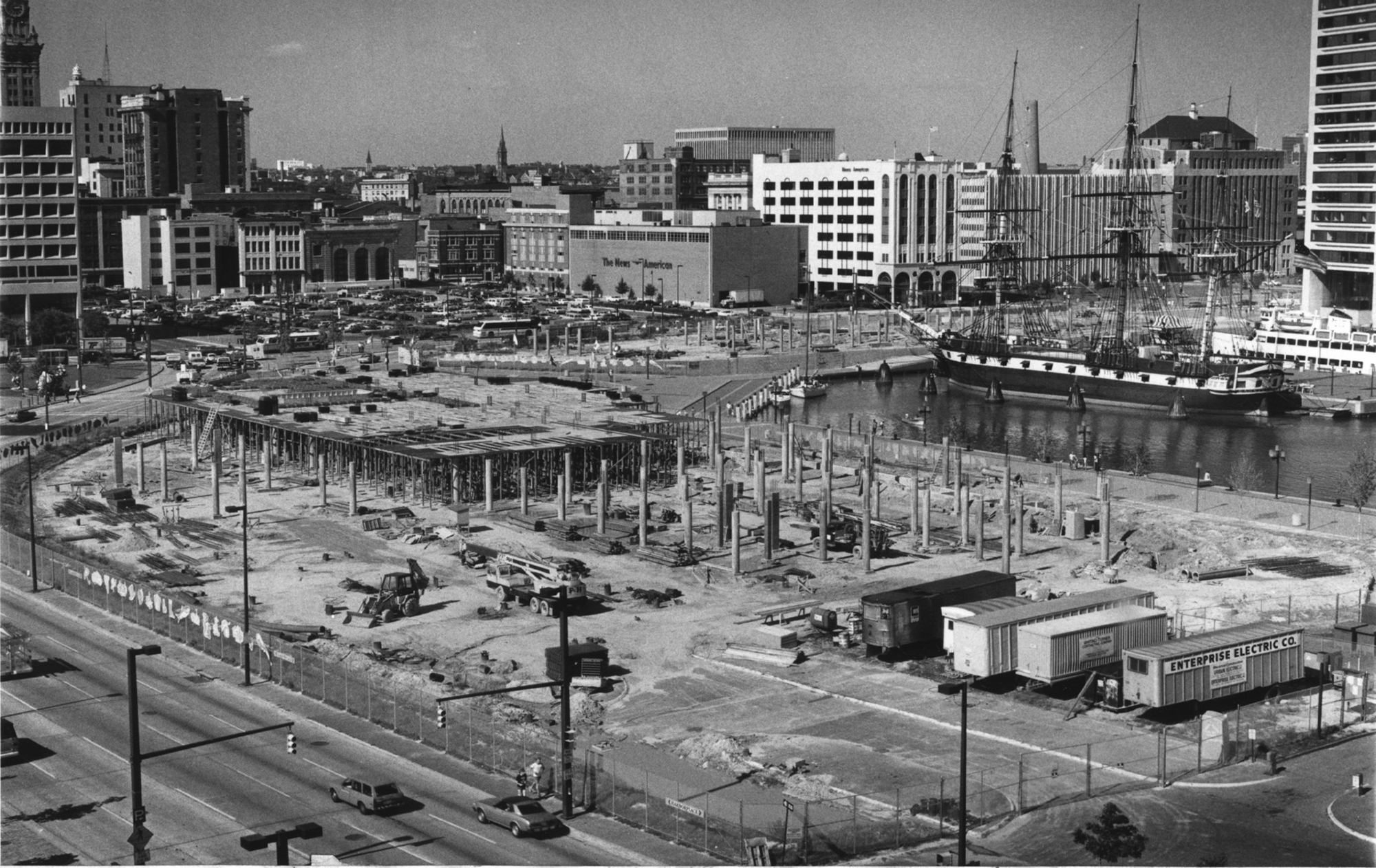 The Rouse Co.'s commercial venture at the Inner Harbor, Harborplace, as it took shape in 1979. (Paul Hutchins/Baltimore Sun/TNS)