Young Professionals board member stays busy on path to success 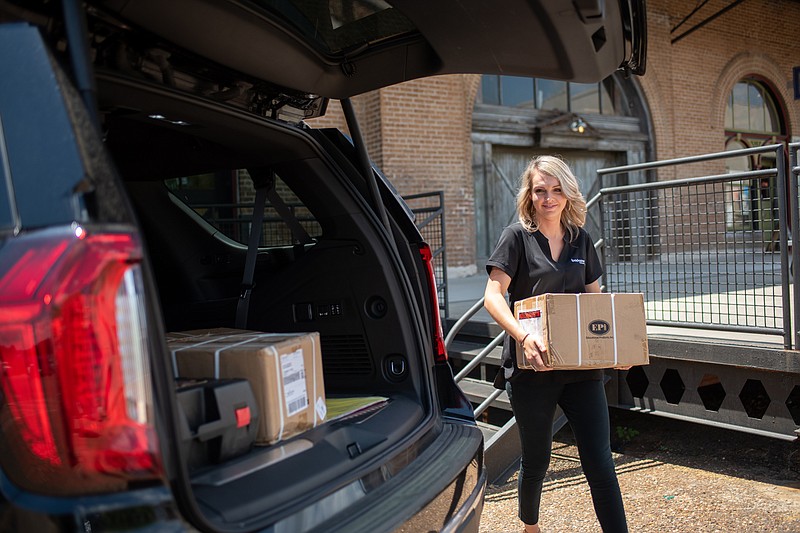 On behalf of the Greater Texarkana Young Professionals, Natalie Copeland loads school supplies to be delivered to Texarkana Resource for their Stuff the Bus program on Friday, Aug. 5, 2022 in Texarkana. (Staff photo by Erin DeBlanc)

Editor's Note: This story is the latest in an occasional series on young leaders and entrepreneurs trying to make a difference in Texarkana.

TEXARKANA -- There are only 24 hours in a day, but Natalie Copeland manages to fill as much of her time being as productive as possible.

She is the newly promoted operations officer at Bobcaw Bank, an incoming student of Leadership Texarkana, board member for the Greater Texarkana Young Professionals and volunteer for the Texarkana Animal League.

The list doesn't end there. When she doesn't have prior obligations, she spends her time as a member of Texarkana Elks Lodge No. 399, where the focus is on supporting veterans. Copeland also sits on various committees within the GTYP.

She has served as a member of the GTYP for three years and has worked to help with events such as Destination Downtown, the annual golf tournament, monthly networking events and quarterly service projects.

Aside from her volunteer work and earning her bachelor's degree in communication from the University of Arkansas at Fayetteville, Copeland gives credit to her support system for helping her down the path to success.

"I've been blessed with wonderful parents who have always pushed me to the best of my abilities," she said. "I've also had some excellent employers and mentors throughout the years, and I've never turned down an opportunity from any of them to learn or try something new."

Whether those opportunities consist of "putting in the legwork," as Copeland says it, or simply assisting when necessary, there is no obstacle she won't overcome. She is accustomed and content to put in the extra energy, hours and skills necessary to see a project through to fruition.

"I'm kind of just 'that person' who prefers to operate that way, but it has paid off so far," she said in reference to her willingness to go above and beyond.

Her never-ending desire to learn new ways to improve carries her through her career path and civic responsibilities. Copeland acknowledges that her nonprofit involvement strengthens her ability to achieve goals she has set.

"My involvement in nonprofits has provided me with a multitude of resources that have helped me grow professionally," Copeland said. "I never meet a stranger and enjoy getting out and about and socializing, and because of this, I've made countless connections that have proven to be beneficial, as well."

The most significant change in her career so far was a recent promotion to operations officer at Bobcaw Bank in Texarkana, Texas. Taking on this new role has required her to adapt to a "new world" and learn new sets of skills.

"I've switched gears with this role change, and there is a lot of 'new' that I'm doing my best to absorb like a sponge," she said.

One theme in Copeland's story is her willingness to work with others and her understanding that collaboration strengthens one another, whether it's in her career or in her civic involvement. Her observations of others in both the nonprofit and private sectors have allowed her to understand what makes a good leader.

"There are many similarities between leadership and management, but there is a fine line between the two. Management is task-oriented, while leadership is people-oriented," she said. "A great leader sets the vision and inspires others. Most importantly, in my book, a great leader shapes the culture. If the culture is lost, everything else will be lost too."