New L-E audio and video instructor leads in, out of classroom 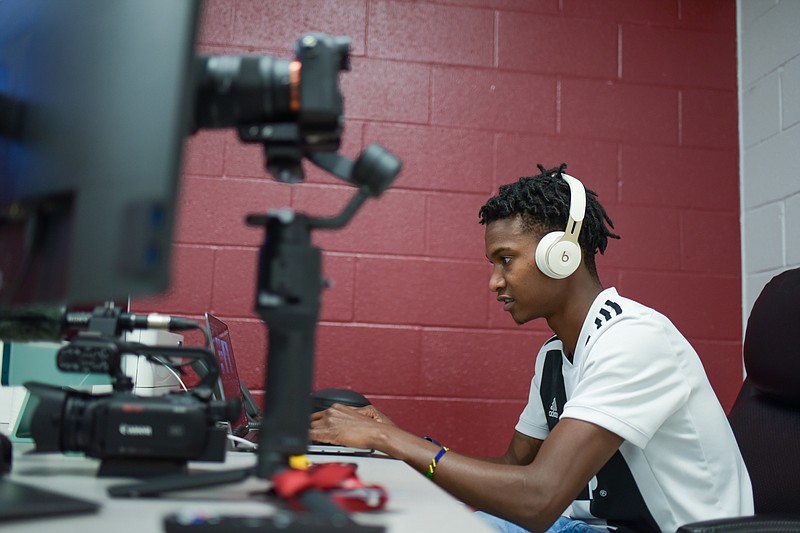 Ronald Makaramba prepares for his first day of class as an audio and video instructor Wednesday, Aug. 10, 2022, at Liberty-Eylau High School in Texarkana, Texas. (Staff photo by Erin DeBlanc)

Editor's Note: This story is the latest in an occasional series on young leaders and entrepreneurs trying to make a difference in Texarkana.

This is his first year as the new audio and video teacher at Liberty-Eylau High School, where he is also the instructor for Liberty-Eylau Television.

"I am excited for this new journey," Makaramba said. "I cannot wait to see how many lives I'll impact."

Makaramba is from Dar Es Salaam, Tanzania, in East Africa.

"Where I come from there are very limited opportunities," he said.

Growing up, Makaramba attended private schools until he transitioned to a new life in England, where he continued his formal education and played soccer through the United Sports Agency.

"My parents had set me up for success. It was my duty and responsibility to make sure I took advantage and made the most of it. I have always been hungry, never satisfied. Remember, a mind that is satisfied, is a mind that lacks ambition," he said.

In 2016, Makaramba scored an athletic scholarship and moved to the United States. Through the U.S. Agency, he was recruited by Lassen Community College (Juco) in Susanville, California.

In California he played two years of soccer, and after his sophomore year he transferred to Texas A&M University-Texarkana. While a student at TAMU-T, Makaramba co-captained the men's soccer team on campus.

"I was also involved in a program called PATH, which stands for Personal Achievement Through Help," he said. "Through the PATH program and men's soccer team I was able to acquire various leadership skills that I believe helped me to get to where I am today," he said.

This year, Makaramba hopes to convey the importance of understanding social media to his students.

"Keep pushing content," he said. "Get a startup camera, get familiar with it. Get out and film and take pictures. Link up with successful people that own businesses. Just put your work out there. You never know who's watching."

That is, afterall, how Makaramba paved his path to success and being a leader for youth in the area.

"God gave me a gift, and I ought to use it the right way, to impact the community," he said.

Print Headline: New L-E audio and video instructor leads in, out of classroom