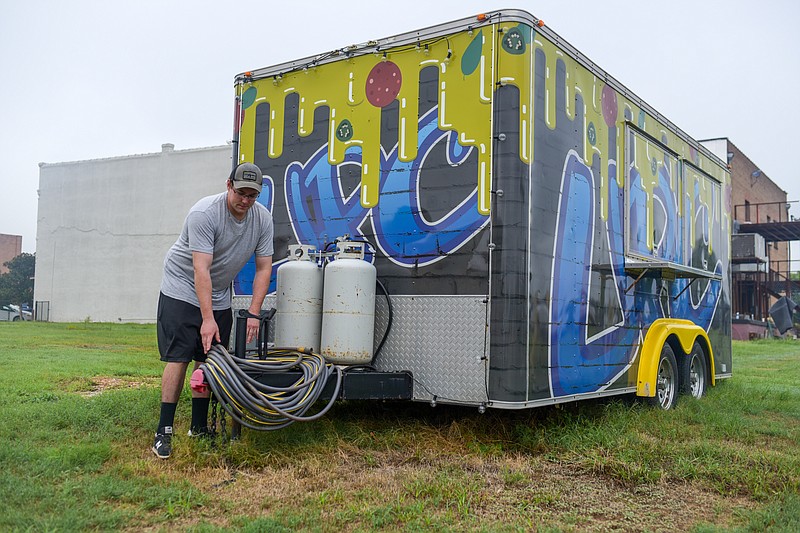 Tyler Traut, owner of Underground Pizza Co., checks up on his food truck while temporarily closed for business on Thursday, Aug. 11, 2022, in Texarkana, Arkansas. (Staff photo by Erin DeBlanc)

TEXARKANA, Ark. -- Many in Texarkana are familiar with Tyler Traut and his Underground Pizza Co., but many are not aware of what it took to see his dream through to fruition.

What began as a hobby in childhood grew into a successful business venture, but not without its obstacles.

On Christmas 2021, Traut's world stopped spinning when he received a diagnosis of synovial sarcoma, a rare cancer that tends to appear around joints. In Traut's case, the cancer grew around his achilles tendon.

"It was a really, really tough holiday season," he said.

His family had already lost several members to COVID-19. To make matters worse, Traut was misdiagnosed for several years, increasing his anxiety and fear about what the future held and whether or not his cancer had spread.

"You feel it everywhere, you know? OK, it's here, I felt something there. Or I'm slurring my words, it's in my brain. It's really agonizing," he said.

But after the fear subsided and clarity set in, Traut took matters into his own hands. He was ready to fight. The diagnosis catapulted Traut's life in a new direction. He began eating healthy, took up playing disc golf and lost 35 pounds.

After three rounds of chemo, 25 rounds of radiation, and a surgery on June 27, Traut is now cancer free and focusing on the future of his health and his business.

The origin of Underground Pizza Co. came at a time when Traut was a little lost in life. His friends were mostly going to vocational schools and colleges, but he didn't want to follow the same path. He wanted to pursue a career he was passionate about, and it dawned on him that his association of good memories with food was very strong.

"One of the things that I am passionate about is food. It always brings back happy memories. Even if you're having the worst day ever, it can take your mind off of it," he said.

Early on, when Traut was operating out of his home, there was a special customer who resonated deeply with him.

"There was one guy in particular that would order from me every Friday because it was payday. You could tell he didn't have a lot of money. But every Friday, it never failed," he said.

Traut would often give the man the pizza at no charge. The happiness the pizza gave this man was exactly what made Traut go into business in the first place.

"Every time I gave him the pizza, he would open the box and look at it and smile," he said. "I was thinking, and it just got me in my emotions. I was like, 'Man, I'm making people happy, and that's what I like to do.'"

Traut continued to operate out of his home for about a year, consistently growing in popularity. Initially he was making the pizzas for friends, his coworkers at Fat Jacks and those who heard by word of mouth. Then COVID-19 hit, and Traut was laid off.

He immersed himself in what would eventually become Underground Pizza Co. until Arkansas-side City Hall sent him a cease and desist letter.

"Buried in the letter it said, 'We are excited about your new business,' but they also sent me a packet of stuff to fill out to get started legitimately," Traut said.

The process from running the business at home to running a food truck was difficult but a blessing in disguise. Once Underground Pizza Co. had a food truck, Traut was able to produce more pizzas still using the best quality ingredients he could find, many times sourcing ingredients from local farmers markets or straight from Italy.

Traut makes all of his sauces from scratch. The buffalo, barbeque, red sauce, white sauce -- all of them -- are made as if Traut were a scientist, often working months at a time or longer to perfect his recipes.

"It took me probably about six years to get my red sauce right," he said. "Every single day of the week I was making sauce just to try to try to get it right."

One unique pizza creation of Traut's is his jalapeño popper pizza.

"I was pondering on the idea for about six months, but it took me about a year to perfect that one," Traut said.

Another special is his pulled pork pizza, which is smoked for 17 hours.

Traut has poured his heart and soul into his business, perfecting his sauces and original pizzas, but not without obstacles that he had to traverse. After getting shut down by the city and getting diagnosed with cancer, the third time's a charm for Traut, who plans to reopen once he is well, ready and in the clear.

The future plan is to open up a restaurant.