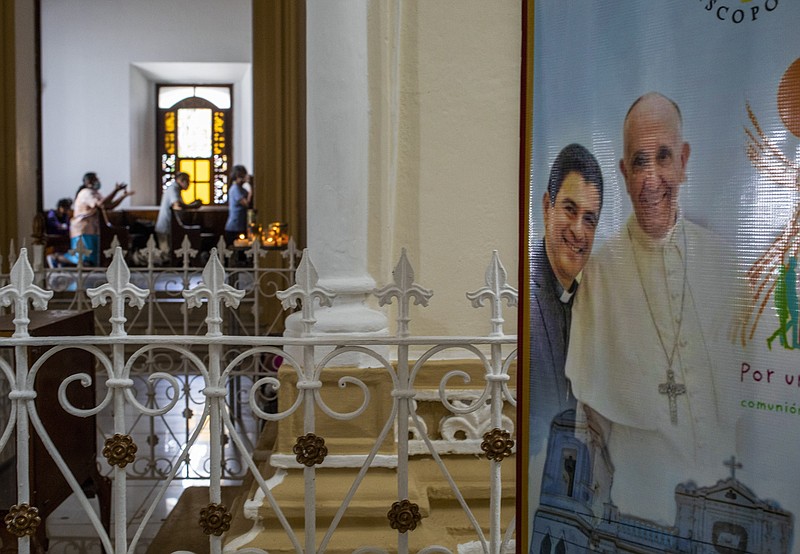 A poster featuring Bishop Rolando Alvarez and Pope Francis hangs inside the Cathedral in Matagalpa, Nicaragua, Friday, Aug. 19, 2022. Nicaraguan police on Friday raided Alvarez's residence, detaining him and several other priests in an escalation of tensions between the Catholic Church and the government of Daniel Oretga. (AP Photo/Inti Ocon)

MEXICO CITY -- Nicaraguan police on Friday raided the residence of a Roman Catholic bishop critical of President Daniel Ortega's administration, detaining him and several other priests in a dramatic escalation of tensions between the church and a government increasingly intolerant of dissent.

The pre-dawn raid came after Nicaraguan authorities had accused Matagalpa Bishop Rolando Álvarez of "organizing violent groups" and inciting them "to carry out acts of hate against the population."

President Daniel Ortega's government has moved systematically against voices of dissent, arresting dozens of opposition leaders last year, including seven potential candidates to challenge him for the presidency. They were sentenced to prison this year in quick trials closed to the public.

The congress, dominated by Ortega's Sandinista National Liberation Front, has ordered the closure of more than 1,000 nongovernmental organizations, including Mother Teresa's charity.

The National Police confirmed the detentions in a statement later, saying that the operation was carried out to allow "the citizenry and families of Matagalpa to recover normalcy."

"For several days a positive communication from the Matagalpa diocese was awaited with a lot of patience, prudence and sense of responsibility, that never materialized," the statement said. "With the continuation of the destabilizing and provocative activities, the aforementioned public order operation became necessary."

It did not mention specific charges.

Álvarez was being held under guard at a house in Managua, where he had been allowed to meet with relatives and Cardinal Leopoldo Brenes, the police statement said.

The others who were taken with Álvarez -- they did not specify who or how many -- were still being processed, police said.

The Inter-American Commission on Human Rights condemned the detentions and called for the immediate release of those held.

Edwin Román, a Nicaraguan parish priest exiled in the United States said via Twitter: "MY GOD! How outrageous, they have taken Monsignor Rolando Álvarez, with the priests who were with him."

Álvarez has been a key religious voice in discussions of Nicaragua's future since 2018, when a wave of protests against Ortega's government led to a sweeping crackdown on opponents.

"We hope there would be a series of electoral reforms, structural changes to the electoral authority -- free, just and transparent elections, international observation without conditions," Álvarez said a month after the protests broke out. "Effectively the democratization of the country."

At the time, a priest in Álvarez's diocese had been wounded in the arm by shrapnel while trying to separate protesters and police in Matagalpa.

Álvarez has kept up such calls for democracy for the past four years, infuriating Ortega and Murillo.

Manuel Orozco, an expert on Nicaragua at the Inter-American Dialogue in Washington, said that Álvarez posed a threat as an obstacle and a symbol to Ortega.

"Nicaraguans are very loyal to the church," he said. "In a survey I did last year, 70% of Nicaraguans say that to them, the political opinion of the religious authority at the national or the parochial level was important in shaping their political views."

"(Álvarez's) narrative, it's based on the religious script, the biblical script about opposing the oppressor," Orozco said. "And he makes allusions not to incite violence or to call for resistance, but he does say there is oppression."

Orozco said the government is betting its pressure on the church won't bring a "proportional response" by the international community. "And so they continue to push the envelope because they don't see that short of a military invasion, there is not going to be anything that can stop them."

Friday's arrests follow weeks of elevated tensions between the church and Ortega's government, which has had a complicated relationship with Nicaragua's predominant religion and its leaders for more than four decades.

The former Marxist guerrilla infuriated the Vatican in the 1980s, but gradually forged an alliance with the church as he moved to regain the presidency in 2007 after a long period out of power. Now he appears to once again see political benefit in direct confrontation.

Ortega initially invited the church to mediate talks with protesters in 2018, but has since taken a more aggressive position.

Days before last year's presidential elections, which he won for a fourth consecutive term with his strongest opponents jailed, he accused the bishops of having drafted a political proposal in 2018 on behalf "of the terrorists, at the service of the Yankees. ... These bishops are also terrorists."

In March, Nicaragua expelled the papal nuncio, the Vatican's top diplomat in Nicaragua.

The government had previously shut down eight radio stations and one television channel in Matagalpa province, north of Managua. Seven of the radio stations were run by the church.

The Aug. 5 announcement that Álvarez was under investigation came just hours after first lady and Vice President Rosario Murillo criticized "sins against spirituality" and "the exhibition of hate" in an apparent reference to Álvarez.

The Archdiocese of Managua had earlier expressed support for Álvarez. The conference of Latin American Catholic bishops decried what it called a "siege" of priests and bishops, the expulsion of members of religious communities and "constant harassment" targeting the Nicaraguan people and the church.

The Vatican remained silent about the investigation of Álvarez for nearly two weeks, drawing criticism from some Latin American human rights activists and intellectuals.

That silence was broken last Friday when Monsignor Juan Antonio Cruz, the Vatican's permanent observer to the Organization of American States, expressed concern about the situation and asked both parties to "seek ways of understanding."

The Vatican again offered no comment Friday and didn't report the news immediately on its in-house media portal. While staying mum, apparently in hopes of not inflaming tensions, the Vatican has been publishing regular expressions of solidarity from Latin American bishops in recent days on its Vatican News site.

The president of Nicaragua's Episcopal Conference did not immediately respond to a request for comment.

The huge street protests across Nicaragua in 2018 called for Ortega to step down. Ortega maintained the protests were a coup attempt carried out with foreign backing and the support of the church.

AP writer Nicole Winfield in Rome contributed to this report. 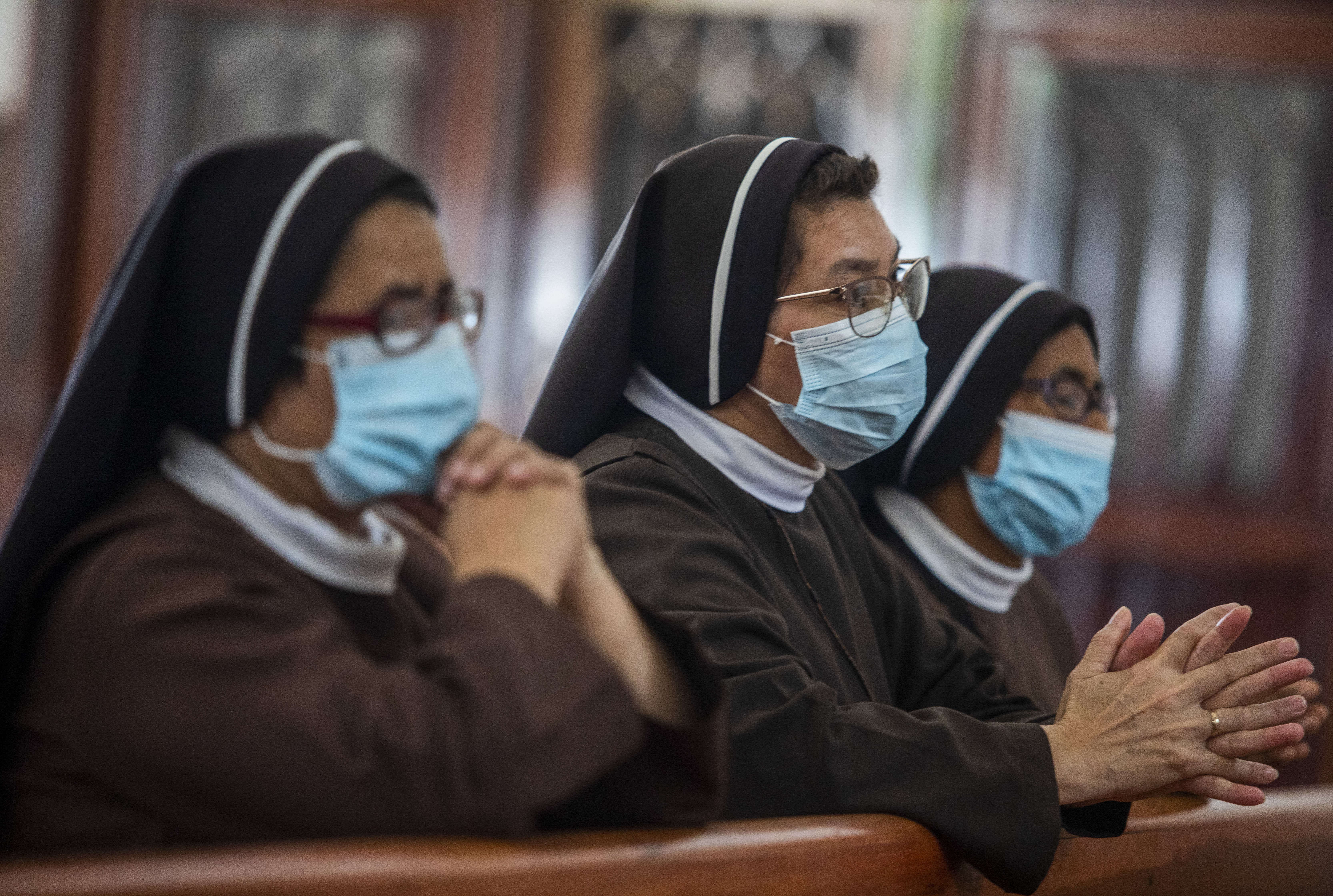 Nuns attend a Mass at the Cathedral in Matagalpa, Nicaragua, Friday, Aug. 19, 2022. Nicaraguan police on Friday raided the residence of Matagalpa Bishop Rolando Alvarez, detaining him and several other priests in an escalation of tensions between the Catholic Church and the government of Daniel Oretga. (AP Photo/Inti Ocon) 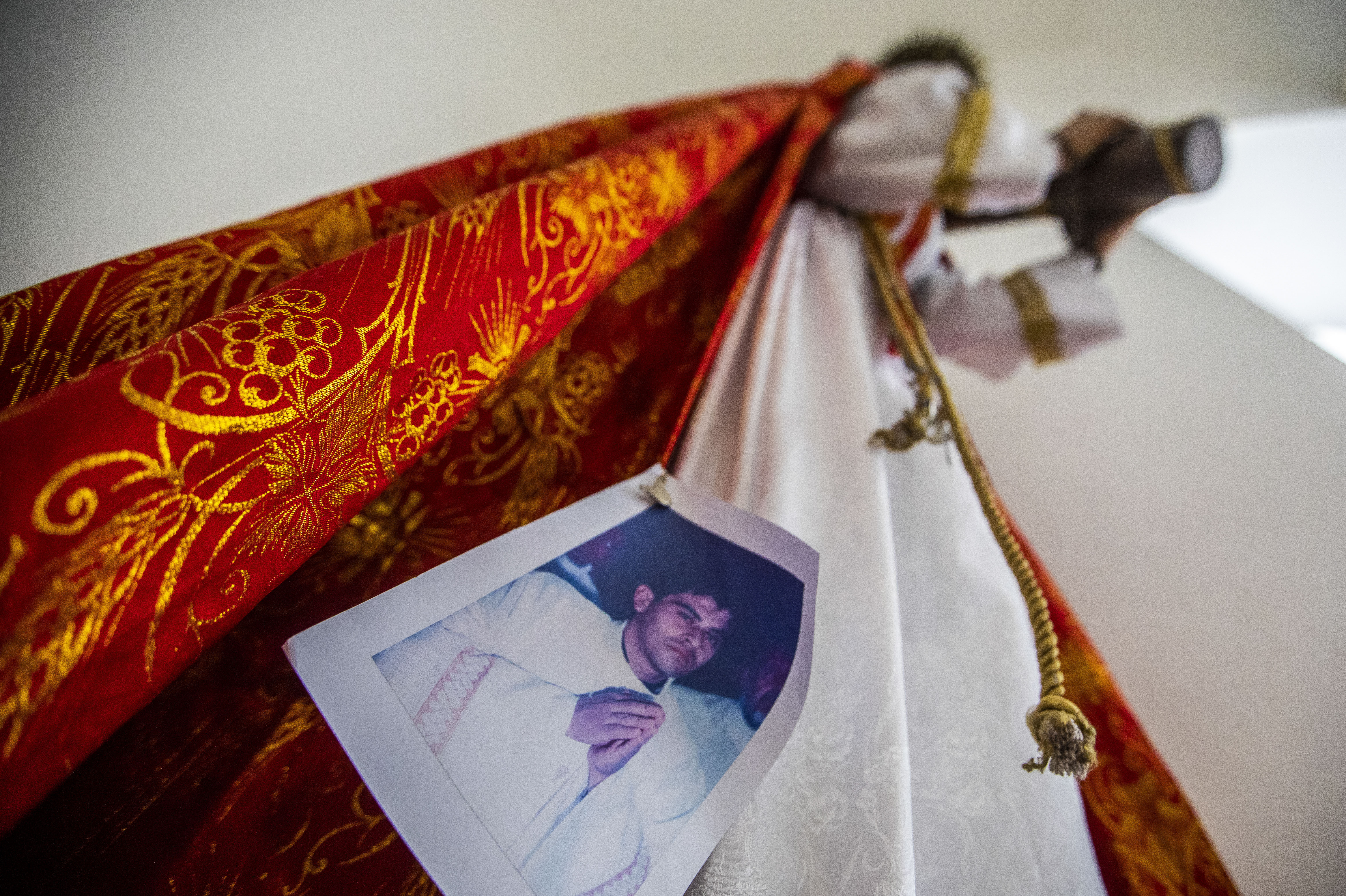 An image of Bishop Rolando Alvarez is pinned to a robe on a statue of Jesus Christ at the Cathedral in Matagalpa, Nicaragua, Friday, Aug. 19, 2022. Nicaraguan police on Friday raided Alvarez's residence, detaining him and several other priests in an escalation of tensions between the Catholic Church and the government of Daniel Oretga. (AP Photo/Inti Ocon) 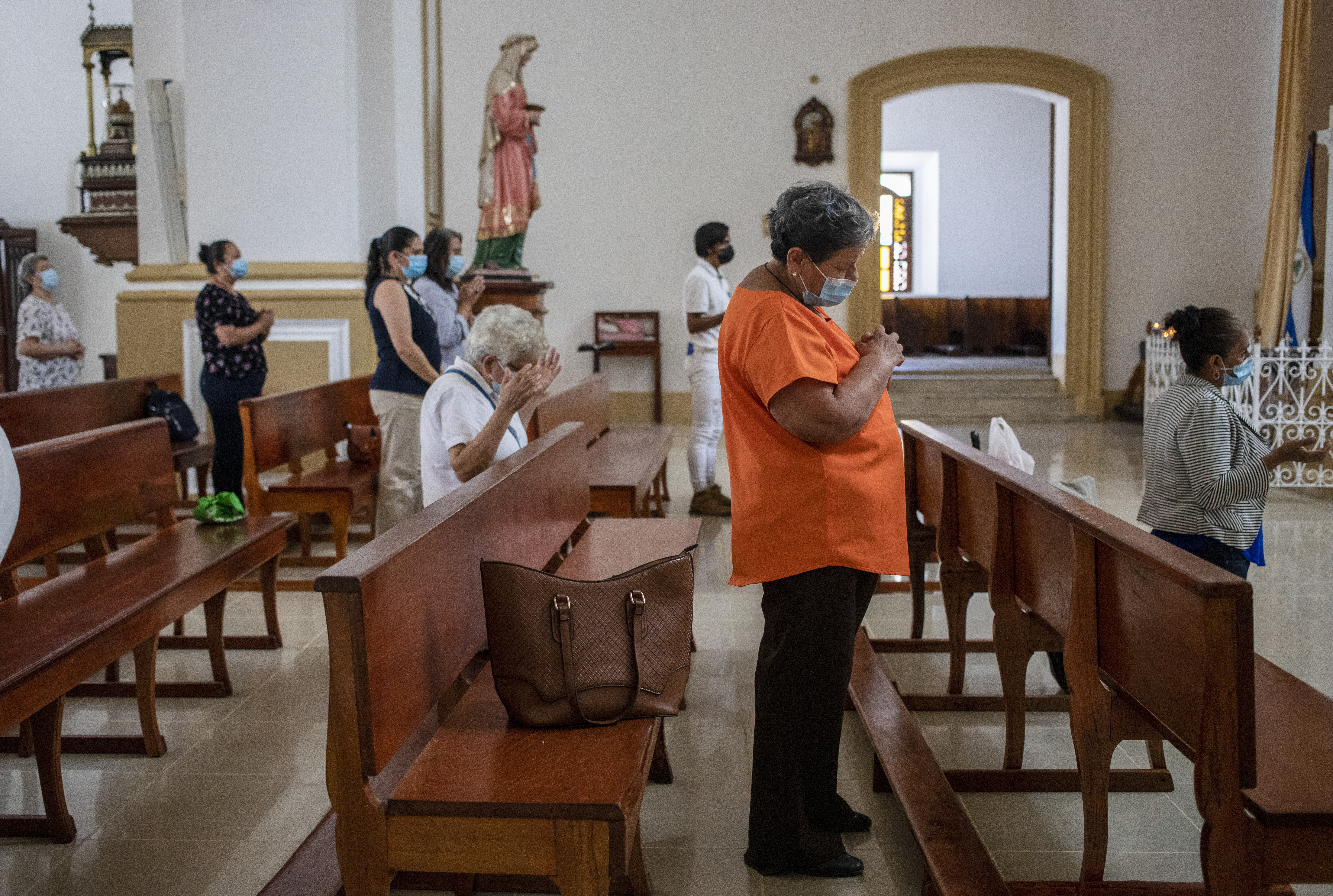 Faithful attend a Mass at the Cathedral in Matagalpa, Nicaragua, Friday, Aug. 19, 2022. Nicaraguan police on Friday raided the residence of Matagalpa Bishop Rolando Alvarez, detaining him and several other priests in an escalation of tensions between the Catholic Church and the government of Daniel Oretga. (AP Photo/Inti Ocon) 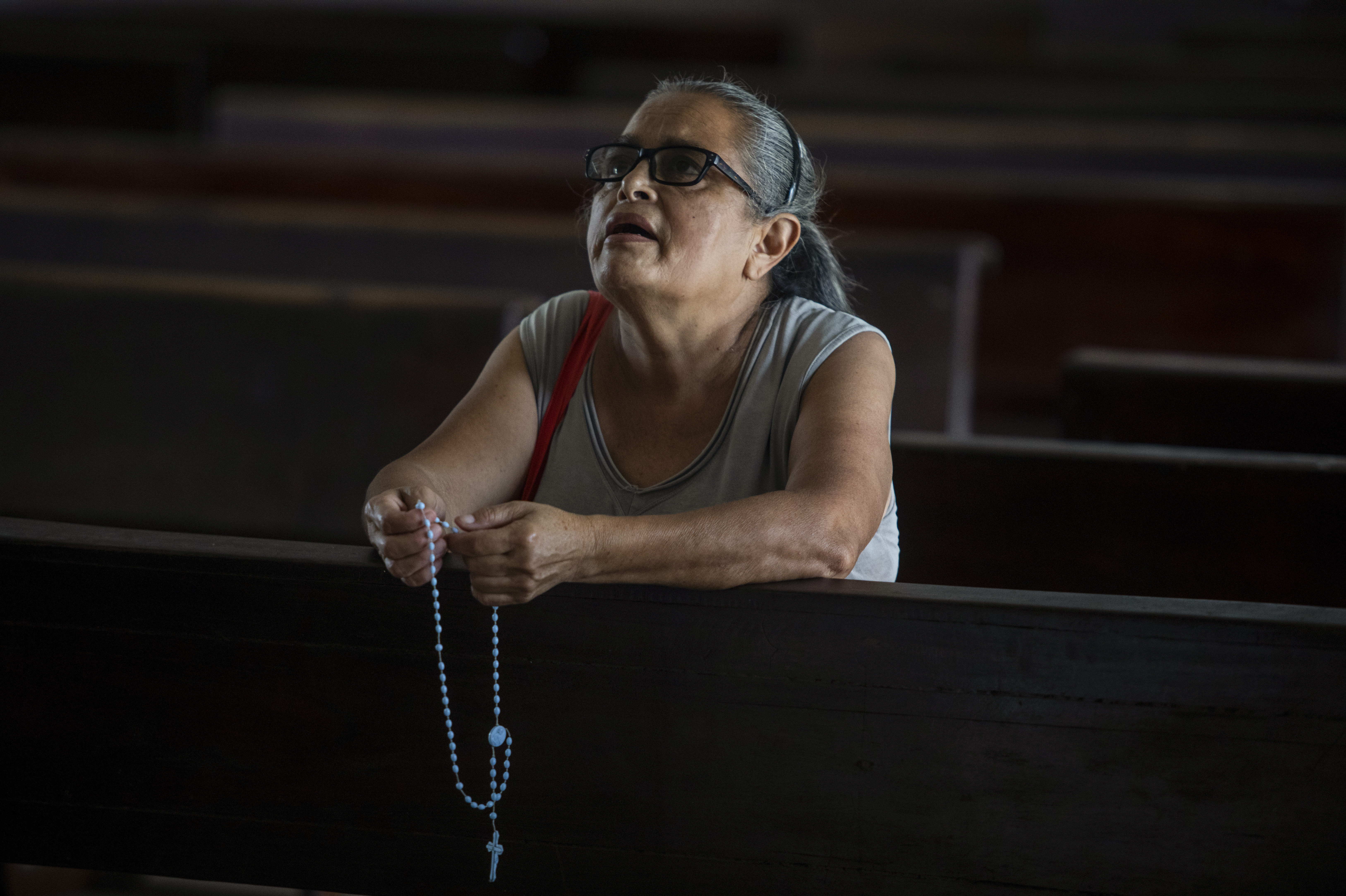 A parishioner prays the rosary as she kneels inside the Cathedral in Matagalpa, Nicaragua, Friday, Aug. 19, 2022. Nicaraguan police on Friday raided the residence of Matagalpa Bishop Rolando Alvarez, detaining him and several other priests in an escalation of tensions between the Catholic Church and the government of Daniel Oretga. (AP Photo/Inti Ocon) 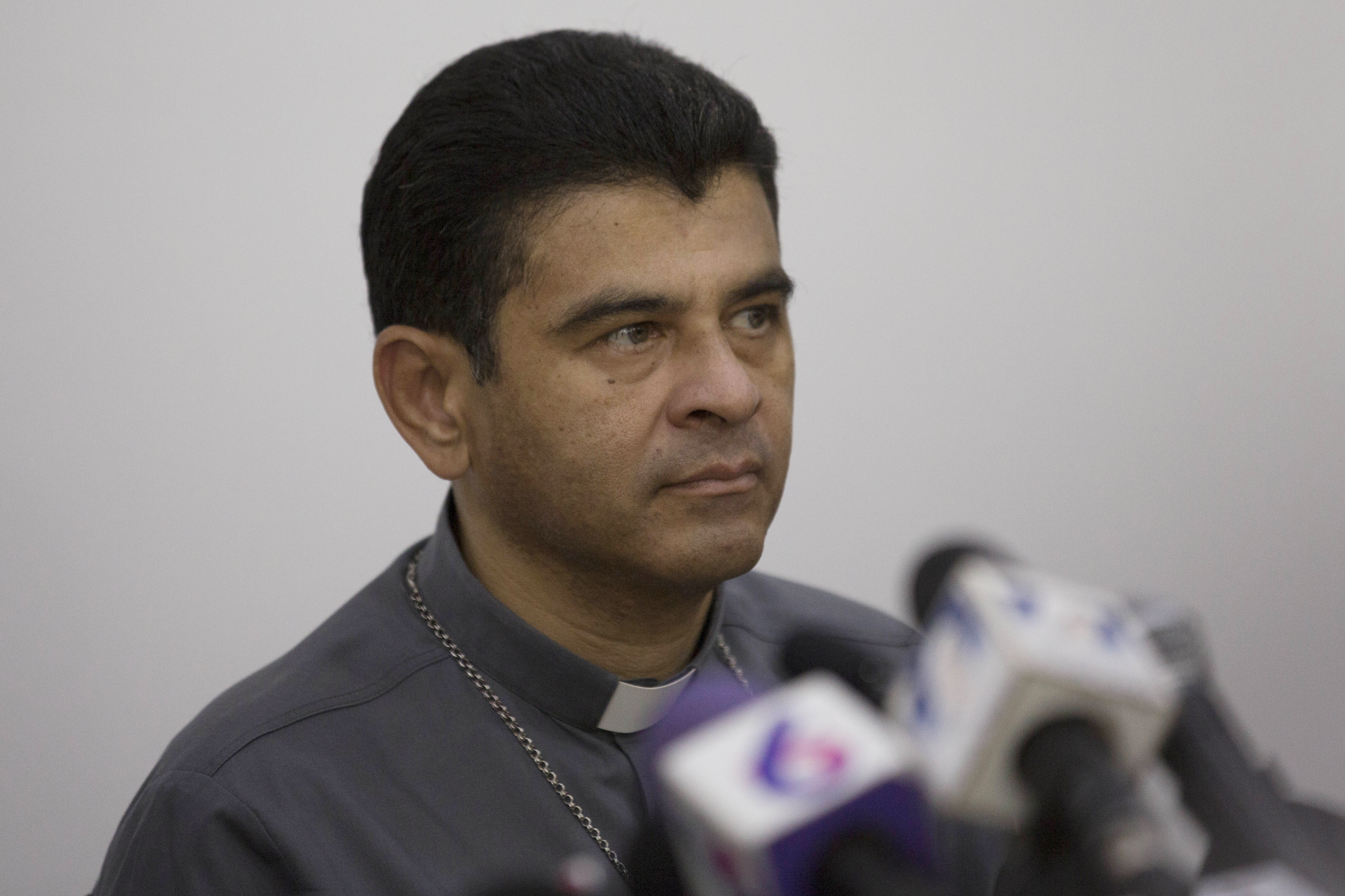 FILE - Monsignor Rolando Alvarez, bishop of Matagalpa, attends a press conference regarding the Roman Catholic Church's agreeing to act as "mediator and witness" in a national dialogue between members of civil society and the government in Managua, Nicaragua, May 3, 2018. Earlier this month Nicaragua shuttered seven radio stations belonging to the Catholic Church and launched an investigation into Alvarez, accusing him of inciting violent actors “to carry out acts of hate against the population.” (AP Photo/Moises Castillo, File) 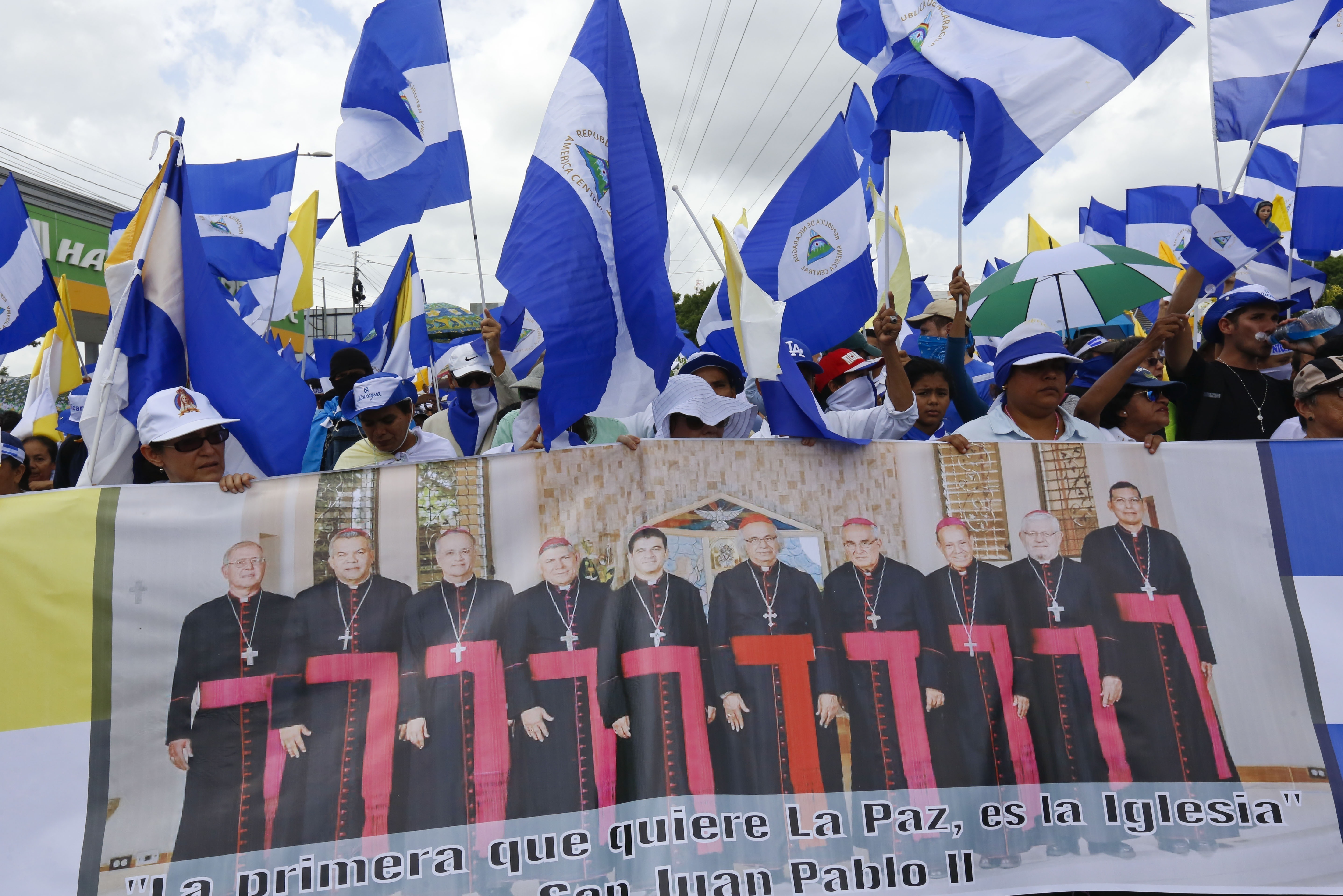 FILE - Anti-government demonstrators hold a banner featuring a group of Catholic cardinals including Nicaraguan Leopoldo Brenes, center right, and a quote from John Paul II that reads in Spanish, "The Church is the first to want peace!", during a march supporting the Catholic Church, in Managua, Nicaragua, July 28, 2018. The Nicaraguan Catholic Church has been sympathetic toward protesters opposed to President Daniel Ortega's government. Ortega has responded by accusing some bishops of being part of a plot to overthrow him and calling them “terrorists.” (AP Photo/Alfredo Zuniga, File)