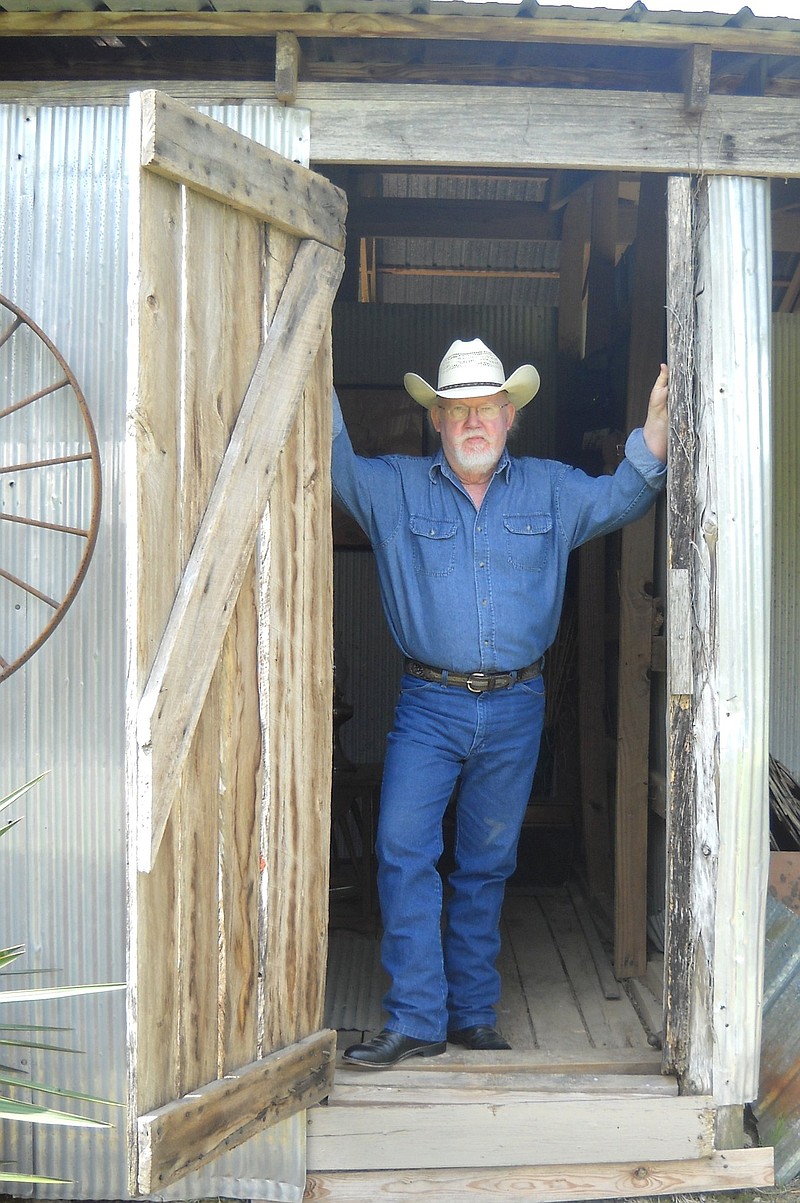 Jimmie Dunn in the bunkhouse of his family’s barn. (photo by Lori Dunn)

In one of my favorite photos of him, my daddy, Jimmie Dunn, stands in the door of his "bunk house," a small room attached to the side of my family's barn.

He is wearing jeans and a blue denim shirt. And of course, his cowboy hat and boots.

Daddy had spent part of his retirement from teaching high school fixing up that old metal barn. He collected old items from around the family ranch and displayed them there until it was almost like a museum. He loved spending time working on the land his daddy and granddad had worked before him, but especially that barn.

I've always heard when you look out at the ocean, or the stars in the night sky, it makes you feel small. The vastness of something that large leaves you feeling that you are a tiny part of something much bigger than yourself.

I've experienced this before, looking at the ocean, looking at the stars, and maybe this is a little different ... but I've felt it at the barn, and the land it sits on.

I'm part of the fourth generation in my family to live or work on this piece of land.

I feel a connection to my family there. The ones that have gone before feel closer there.

And I know my daddy felt the same way.

I am proud I was able to photograph him in one of his favorite places. Not knowing then, of course, that he only had a few years left on earth.

Daddy was a collector and a lover of history. As he cleaned out his own parent's house after their deaths, he would add some of these items to the barn and to his bunkhouse. Vintage household items sit in the barn among natural things such as turtle shells, hawk feathers and cow skulls collected over the years. Arrowheads found nearby are reminders of people who lived here long before us.

Daddy's younger brother, Alan, rode bulls and broncos in rodeos before a car accident took his life just shy of his 19th birthday. His chaps and spurs are hanging in the barn along with saddles and halters from horses long gone, and leashes from old dogs.

The odds and ends in the barn are sentimental, but some are also practical. There are buckets and feed troughs, rakes and post-hole diggers, chains and ropes.

Any kind of tool you would ever want is there, most of them well-used by many different hands.

Before you buy anything from the store, you check the barn first. Because there is a good chance that what you need just might be there.

Daddy wrote a lot when he was younger, and he started writing more cowboy poetry after he retired. Many of the poems were about a lost way of life, but I don't believe it was ever really lost to him

Though he had traveled to many places, read all kinds of books and could talk to people from all walks of life, I believe he was still most comfortable on his own piece of land and in the barn.

In one of his poems, he wrote about his memories of the dust flying at the old corral as his own daddy and granddad worked cattle.

It was the early 1950s. Daddy and his brother were small boys then, peeking through the boards in the fence until they were old enough to help do the work themselves.

He chose Sevier County, Arkansas, because it was where grandma's family was. They had married when she was 17 and moved from place to place, pulling their small trailer house behind the car. But it was finally time to go home.

As land in the area came up for sale, granddad would send money home to his father-in-law Simon Pearce, and Simon would purchase the land for him acre by acre.

Granddad would later joke that at that time, he owned land and cattle but couldn't have told you exactly where it was.

My grandma would later describe her husband and father as "best friends." When she announced her intentions to marry the Oklahoma roughneck, her dad wrote her a letter telling her she had made a fine choice. She treasured that letter for the rest of her life.

I have a few black and white photos of my granddad and great granddad feeding cows in the old corral. Another photo shows daddy as a small boy, sitting on the fence. A fence just a few feet from where about 60 years later, I would take his photo standing in that doorway.

The barn that stands there now was built in the '80s and replaced the wooden one built in 1950. Only a couple of fence posts and part of a loading chute remain of the old corral.

The old trailer house that carried the family from town to town when granddad worked the oil fields was repurposed when he bought the ranch and made into a stock trailer. Maybe granddad was being practical when he made it into a stock trailer, maybe he didn't have the heart to let it go. Either way, it's still in the barn.

Daddy kept some of the original barn wood and painted the date "1950" on it. But I don't think he really needed a reminder. I think sometimes he could see things the way they used to be.

He even wrote about it.

"Tonight my thoughts are lost in the low fog, as it slowly sweeps the fields of everything here and now," he wrote in his notebook. "The grass, the trees, the barn are all yielding to the soft silent pressure of another time."

My house is less than a five-minute walk from that barn. It belongs to me, my mother and sister now.

In good times and bad, it's where I seem to end up. And hard times seem easier to endure when I think of the hard times that have happened before me, and the people who got through them.

It's one of the places I go to when life leaves me saying, "It's not fair."

A connection to my family's past reminds me that life's never been fair. That there has always been heartbreak and grief. That some people die too young, and bad things happen to good people.

Countless seasons have come and gone here, and some of them have been seasons of loss.

But there have also been over 70 years of lives well-lived.

Three generations of men who worked hard, loved their wives, daughters and grandaughters fiercely and had few, if any, regrets at the end of their lives.

This barn in a Southwest Arkansas pasture is a long way from any ocean. But most of the time you can see the stars in the night sky. And they make you feel part of something bigger than yourself.

I always seem to return to the barn.

Because there is a good chance that whatever I need, it just might be there. 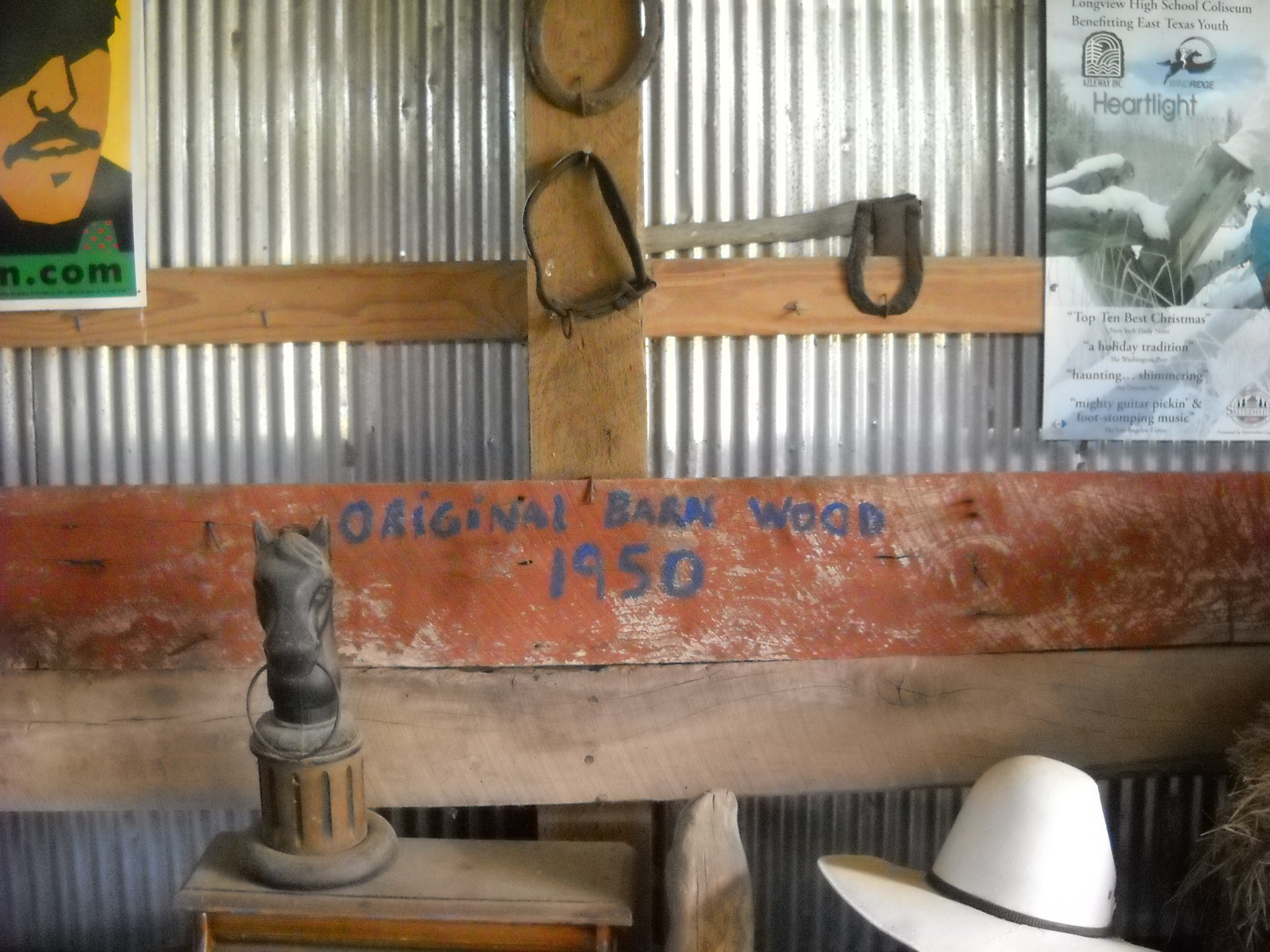 Original barn wood from 1950 displayed inside the current barn. (photo by Lori Dunn) 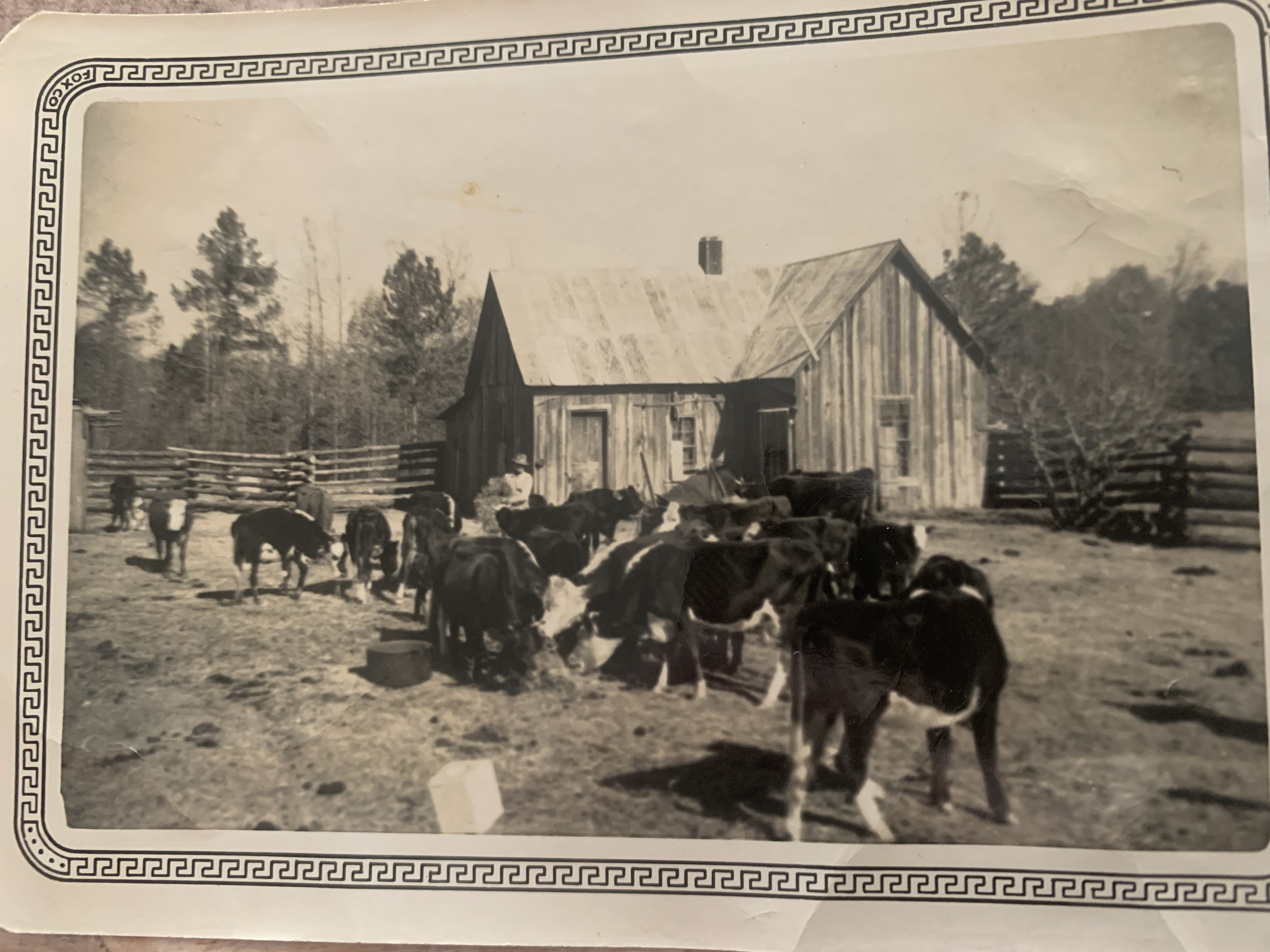 Simon Pearce feeding cattle in the old corral in the early 50s. 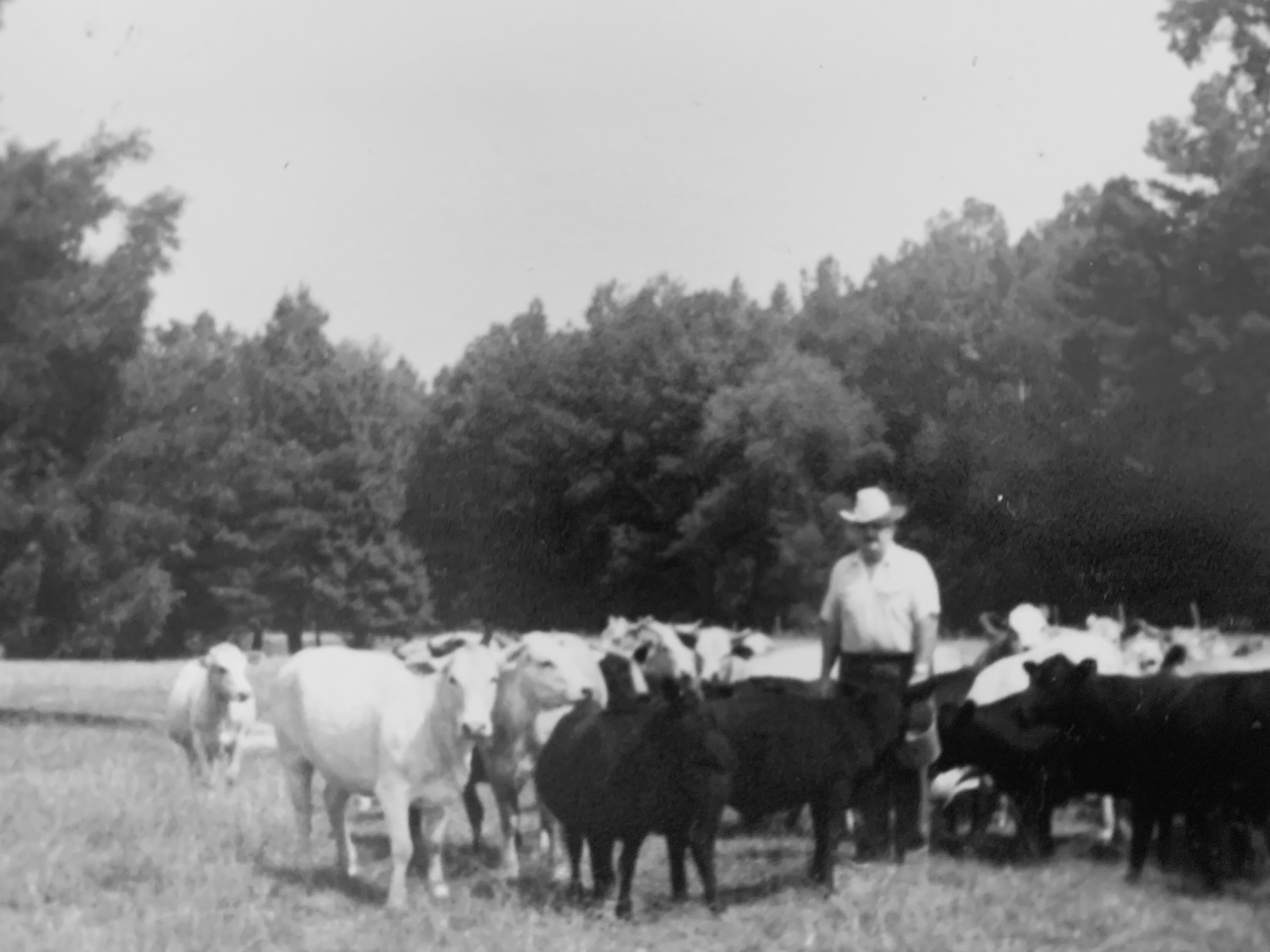 Buddy Dunn with his cattle in early 1980s. 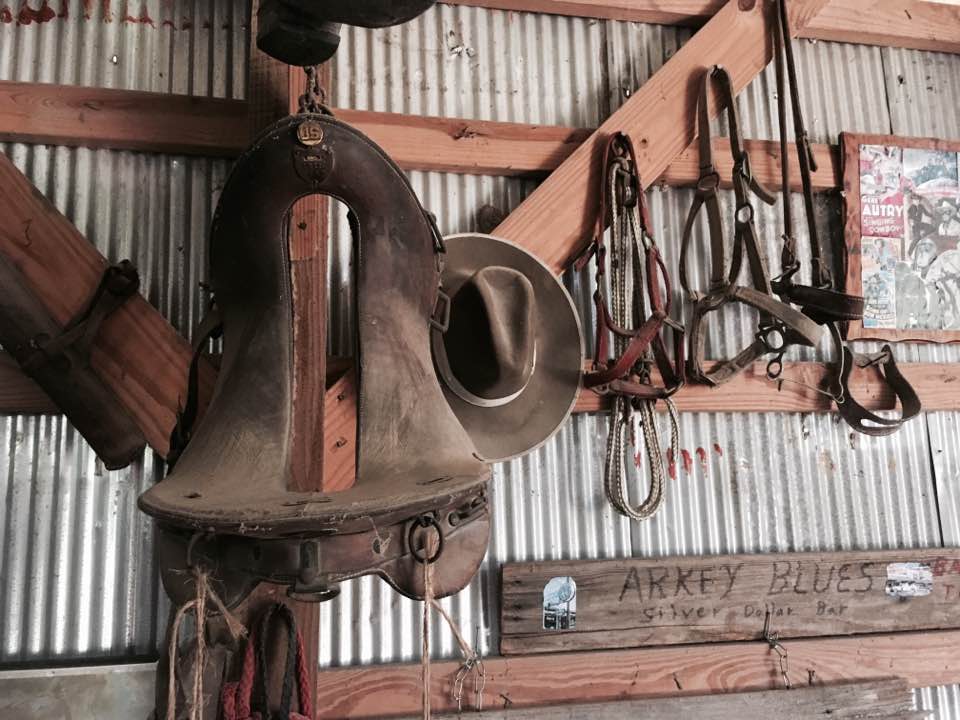 An old calvary saddle is displayed in the barn along with halters and leashes, hats and other items. (photo by Lori Dunn)