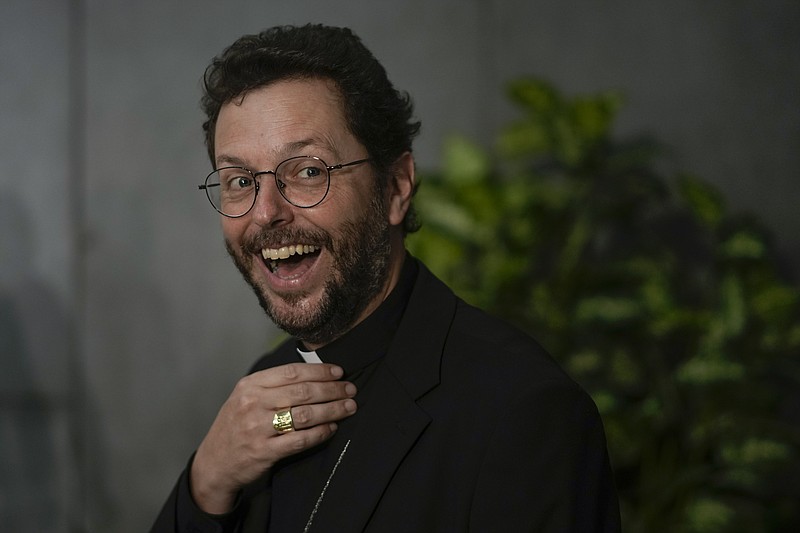 Newly named cardinal Giorgio Marengo poses for a photo during a press conference Saturday, Aug. 27, 2022, at the Vatican. Pope Francis will formally expand the ranks of churchmen now eligible to vote for his successor in case he dies or resigns. Of the 20 churchmen raised to cardinal’s rank on Saturday in the ceremony known as a consistory in St. Peter’s Basilica, 16 are younger than 80 and thus, according to church law, could participate in a conclave to elect a new pontiff. (AP Photo/Andrew Medichini)

VATICAN CITY -- With a solemn ceremony to create new cardinals, Pope Francis was poised Saturday to formally expand the ranks of churchmen now eligible to vote for his successor in case he dies or resigns -- the latter a step he has said he'd consider if the need arises.

Of the 20 churchmen being raised to the rank of cardinal in St. Peter's Basilica, 16 are younger than 80 and thus eligible to participate in a conclave -- the ritual-shrouded, locked-door assembly of cardinals who cast paper ballots to elect a new pontiff.

By now, the 85-year-old Francis has named more than half of the elector cardinals. That bolsters the prospects that whoever becomes the next pontiff will share his vision for the future of the church.

McElroy has been among the few American bishops who questioned why the U.S. bishops conference insists on identifying abortion as its "preeminent" priority. Echoing the pope's concerns, he has questioned why greater prominence isn't given to poverty, immigration and climate change.

He is also among a minority of U.S. bishops opposed to a campaign to deny Communion to Catholic politicians who support abortion rights. Cordileone has said he'd no long allow U.S. House Speaker Nancy Pelosi to receive Communion for her defense of abortion rights.

While staunchly against abortion as a grave sin, Francis has also decried what he calls the weaponization of Communion.

McElroy last year was among a small group of U.S. bishops signing a statement expressing support for LGBTQ youth and denouncing the bullying that is often directed at them.

Francis has tried to make gay Catholics feel welcome in the church, whose teaching holds that same-sex intercourse is a sin.

Among those selected to be among the newest cardinals is Bishop Richard Kuuia Baawobr from Wa, Ghana. He has spoken out against LGBTQ rights.

Asked by The Associated Press about such contrasting views, McElroy replied that "there are always cultural differences within the life of the church as there is within in the human family. And different cultures approach these questions in different ways."

McElroy added: "My own view is that we have an obligation in the church to make the LGBT persons feel equally welcome in the life of the church, as everyone else. And that is the mandate we have, so we have to find a way of doing that."

Archbishop Ulrich Steiner of Manaus, Brazil, was tapped to be the first cardinal from the Amazon, the vast, environmentally-vulnerable region in South America on the Argentine-born pontiff's home continent. In remarks to The AP, Steiner expressed concern about increasing violence in the Amazon --- "not only in terms of the environment, but also because of drugs."

"But this violence was not born there, it came from outside," Steiner said. "It is always violence related to money. Concessions, deforestation, also with the mines, also with the fishing."

Increasingly, more of the cardinals are coming from Asia and Africa, while fewer are coming from Europe, where the number of rank-and-file Catholics has dwindled in recent years. After the consistory, those from Europe will account for 42% of the College of Cardinals, compared to 52% in 2013, when Francis' pontificate began.

At 48, the youngest member among the cardinals' ranks is an Italian missionary in Mongolia. Archbishop Giorgio Marengo, as the apostolic prefect of Ulaanbaatar, ventured that the tiny size of his flock there -- Catholics in that Asian country number about 1,300 -- factored in the pope's selection of him. Francis "knows how important it is supporting these little communities."

Sabrina Sergi and Fanuel Morelli contributed to this report.