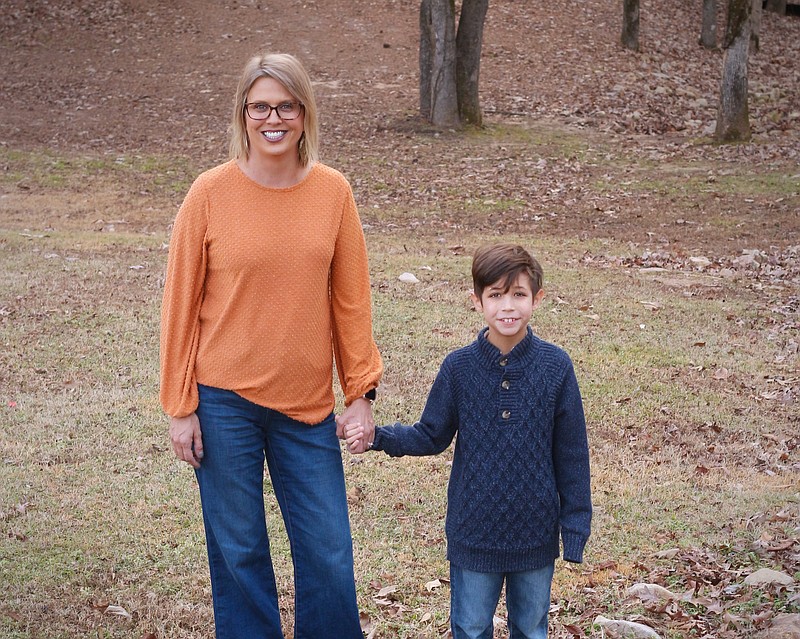 Andrea and her son Greyson, who she adopted when he was 13 months old. (Photo by Katie Stone.)

She had planned a solo hiking trip near Hot Springs, Arkansas, where her now husband was also on a hiking trip. The two of them met on the trails and they have been hiking and camping together ever since.

"People ask me if I have Raynaud's Disease, where your fingers are really cold and they turn blue," she said. "I just tell them that my fingers are blue due to lack of oxygen."

Andrea was born with congenital heart disease, which had become apparent when her mother was about five months pregnant. She was diagnosed with Dextrocardia, single ventricle, and single A/V valve at birth.

With every passing year, Andrea's parents feared what the doctor's told them may come true, but Andrea's parents made a point to always keep things as normal as possible and always smile. Her childhood included cardiology appointments, tests, and surgeries, which is different from an average childhood. However, it was just part of everyday life to Andrea.

"I don't think my childhood was very different. This is the only thing I have ever known so it wasn't difficult for me," she said. "I mean, my mom wouldn't let me be a cheerleader or play sports because of my heart, but I still went places and hung out with friends. I went to sleepovers, too."

Andrea's saw a cardiologist in Fort Smith until he passed away. Then she started seeing a cardiologist at the Arkansas Children's Hospital in Little Rock, who connected her to another physician. When she turned nine years old, her family traveled to Boston where she underwent a procedure known as lateral funnel.

According to The Fontan Registry website "In this operation, the vein draining the blood from the upper part of the body (the superior vena cava) was attached to the upper part of the right lung artery and the collecting chamber was attached to the underside of this same right lung artery. A half tube of artificial material was then sutured inside the collecting chamber to direct the blood coming from the lower part of the body in what looked much more like the inside of a cylinder inside the heart."

This operation is designed so that this tube inside the heart will still have some potential for growth.

Andrea's family had rented an apartment in Boston so that they were close to her during the hospital stay. She was also required to stay close after she went home in case there were any problems and for follow up appointments.

Andrea suffered several difficulties which kept her in the hospital. Although this was a stressful time and her family, she remembers the time spent with the hospital social worker as the "highlight of her day."

"That is when I knew I wanted to be a Social Worker," she said. "She was so nice and very helpful to me and my family."

In 2007, she worked for the Child Protective Services, where she saw a great need for foster families. She decided to become a foster parent. She had four children placed with her during her time as a foster home including a 3-month-old baby boy named Greyson.

Andrea knew that she would never be able to have biological children due to her heart condition, but that was not going to stop her from having a family. She adopted Greyson when he was 13 months old.

She took time to write a letter to her son for every big challenge he may face once she has passed away.

Andrea has seen a multitude of specialists throughout the years. She even started the process to be placed on the heart transplant list. Her heart transplant evaluation was an extensive number of scans, tests, and doctor's appointments that ultimately ended in disappointment.

"I went through the whole process for the heart transplant. I got to the last person on the list, and he told me 'I cannot do a heart transplant on you.' I didn't understand why," she said. "He said that I need a heart, liver, and lungs. He said 'I could do the surgery. When it is done, I would walk out to your husband who is holding your 3-year-old son and tell him that the heart transplant was great. She is dead.' And he said that to me over and over and that there is nothing they can do for me."

Due to Andrea's heart condition, she also has non-alcoholic cirrhosis of the liver and arteriovenous malformations in her right lung. AVMs refer to arteries and veins with abnormal connections between them.

In the lungs, arteries first carry blood from the heart to smaller arteries which then feed into even smaller vessels called capillaries, according to The Mayo Clinic's website. The website also defines cirrhosis as a late stage of scarring of the liver caused by many forms of liver conditions. Each time your liver is injured -- whether by disease, excessive alcohol consumption or another cause -- it tries to repair itself. In the process, scar tissue forms. As cirrhosis progresses, more and more scar tissue forms, making it difficult for the liver to function.

In 2017, Andrea had a pacemaker placement procedure, which is a small electronic device that is place in the chest to help control a person's heartbeat. Her cardiologist also found a doctor in San Diego who thought he could help her. She moved to the West Coast in search of something new to treat her conditions.

The doctor started her on a new medication, Entresto, which she claims has 'changed her life.'

Entresto is a drug prescribed to patients with certain types of heart failure. It works by relaxing blood vessels so that blood can flow more easily, which makes it easier for your heart to pump blood to your body, according to WebMD.com. "I didn't even realize I was in heart failure until one time they sent me some medical papers in the mail when I lived in Fort Knox. I was reading the paperwork and it said that I had right sided heart failure," she said. "I was like 'What?! I only have a right side!?"

Andrea has attended multiple cardiac conferences as a guest speaker where she talked about being a person before being a cardiac patient.

"When I talk to cardiologists, my whole point is for them to remember that these are people with families. They have lives," she said. "Behind all the diagnoses they are real people. They are more than the print that they see on the paper. They have children and families."

Andrea also speaks at church conferences where urges the attendees to live life to the fullest.

"God is not confined so let him do whatever he wants to do to in your life. They can tell me over and over that I am not going to live, but I am living! I will until God doesn't want me to. So, I will live until then! Eat the cake! Jump out of the plane," she said. "Don't let your whole life pass you. It isn't fair to anyone especially you! Don't let your diagnosis define you."