For tastier pasta, toast the noodles 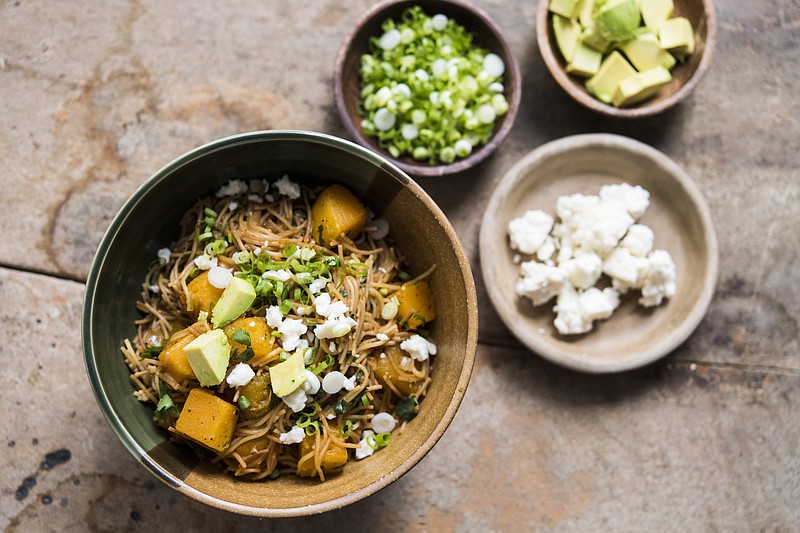 A great way to add flavor to a pasta dish is to toast the noodles in oil, which brings out nutty notes that add complexity to the final result. And a great example of this lesson is sopa seca, which translates to "dry soup" from the Spanish.

This Mexican dish typically features broken, thin noodles that are toasted, then cooked with broth and tomatoes. The noodles absorb the liquid, yielding pasta that is "dry," but rich with the flavors of soup. And the toasted pasta creates a rich, nutty flavor foundation and a unique texture for the finished dish.

For the version in our book, "Milk Street Tuesday Nights," which limits recipes to 45 minutes or less, we opted to use butternut squash instead of tomatoes. The squash adds a pleasing sweetness and pairs nicely with the seasonings, transforming the dish into a hearty meal for fall or winter.

In a large Dutch oven over medium, heat 2 tablespoons of the oil until shimmering. Add the pasta and cook, stirring, until golden, about 5 minutes. Transfer to a paper towel-lined plate and set aside. Wipe out the pot.

In a medium bowl, toss the squash with the remaining 2 tablespoons oil, 2 teaspoons salt and ½ teaspoon pepper. Return the Dutch oven to medium-high heat and add the squash. Cook, stirring occasionally, until the squash begins to brown and is almost tender, about 4 minutes. Add the onion, 1 teaspoon salt and 1 teaspoon pepper, and cook, stirring occasionally, until the onion has softened, about 5 minutes.

Add the cilantro stems, garlic, cumin, paprika and cinnamon. Cook, stirring, until fragrant, about 1 minute. Add the toasted pasta and broth, then bring to a simmer. Cover, reduce the heat to medium and cook until the pasta is al dente and has absorbed most of the liquid, about 7 minutes.

Stir in the lime juice and half of the cilantro leaves. Taste and season with salt and pepper. Ladle into bowls and serve topped with the remaining cilantro leaves, avocado, queso fresco and scallions. 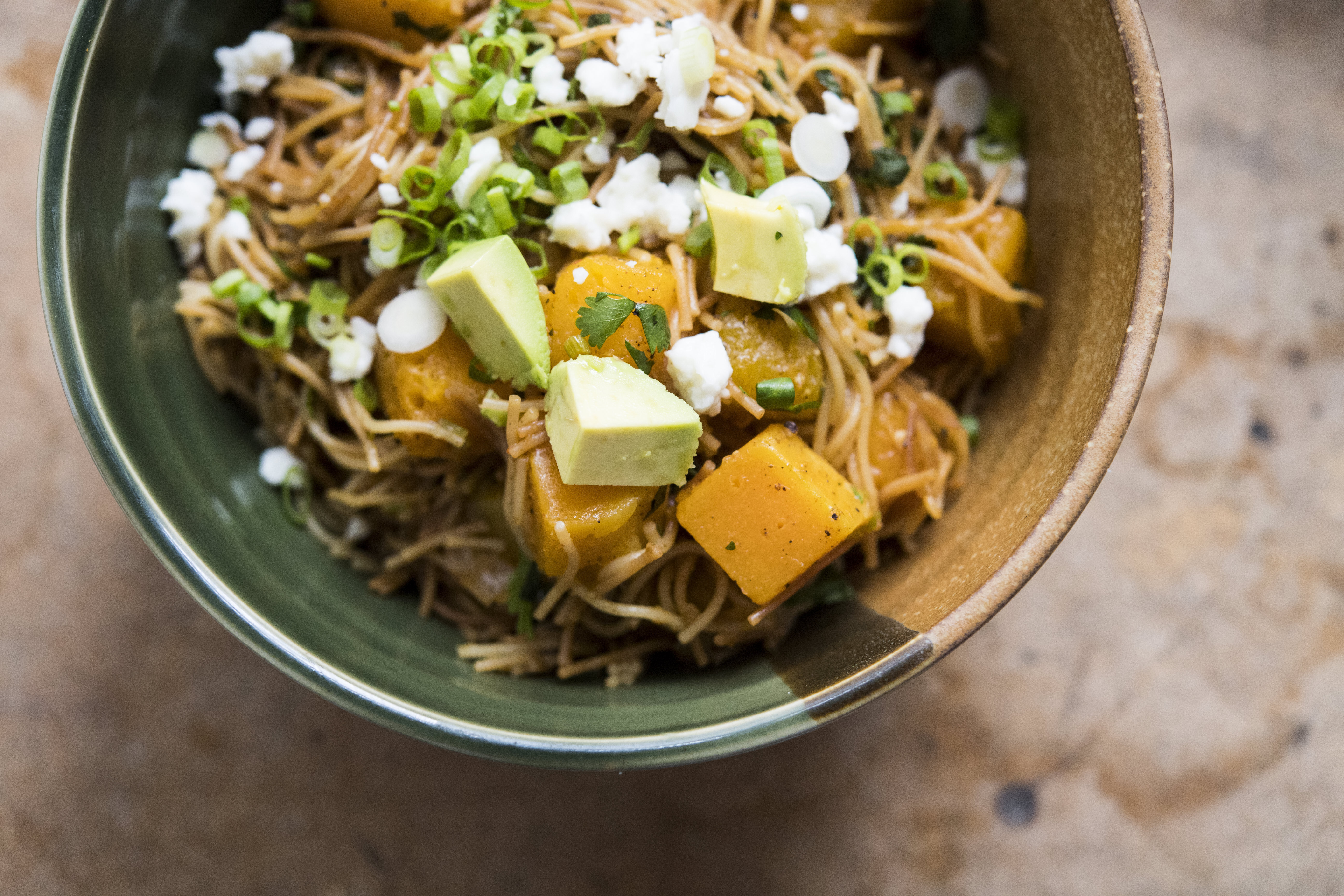 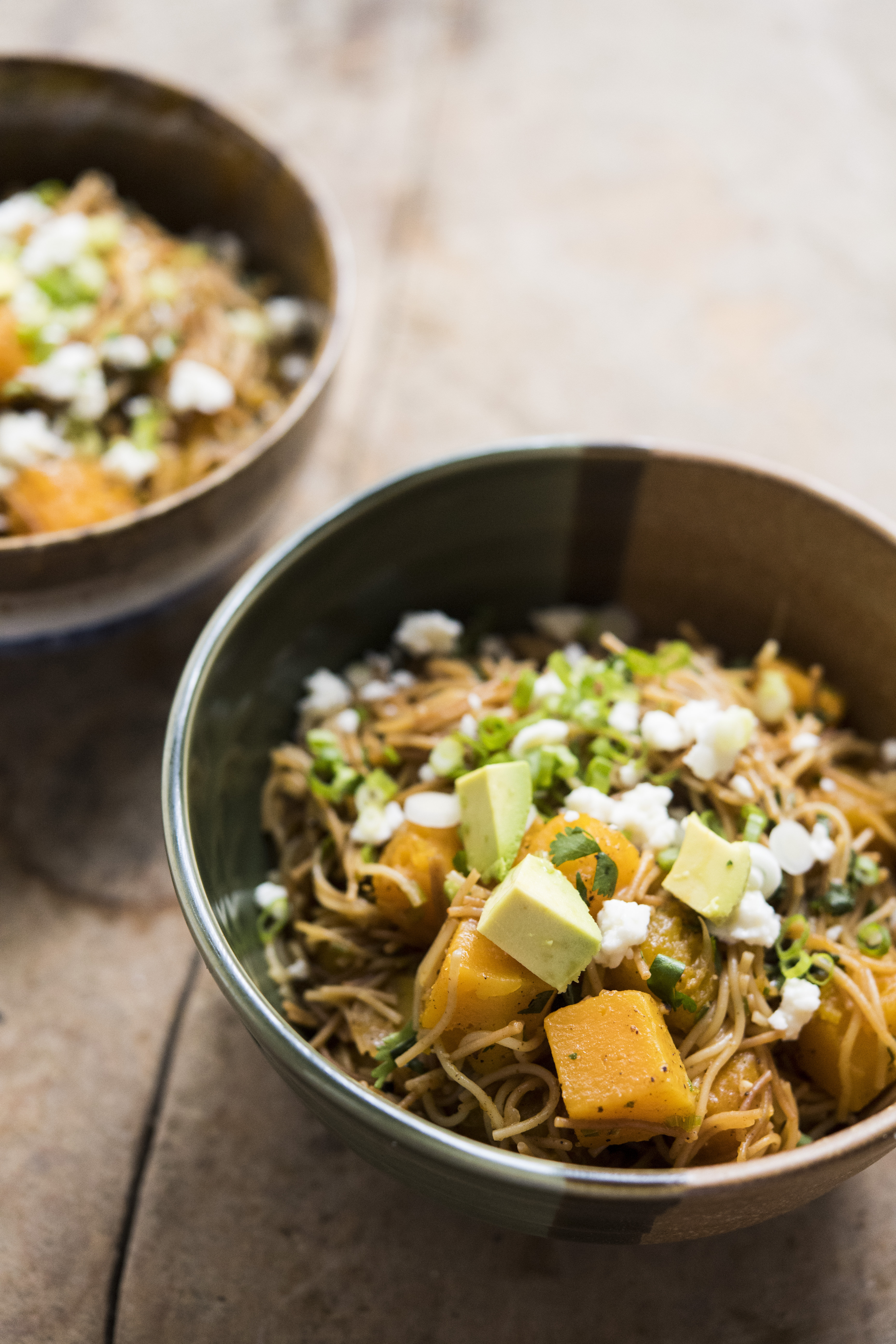