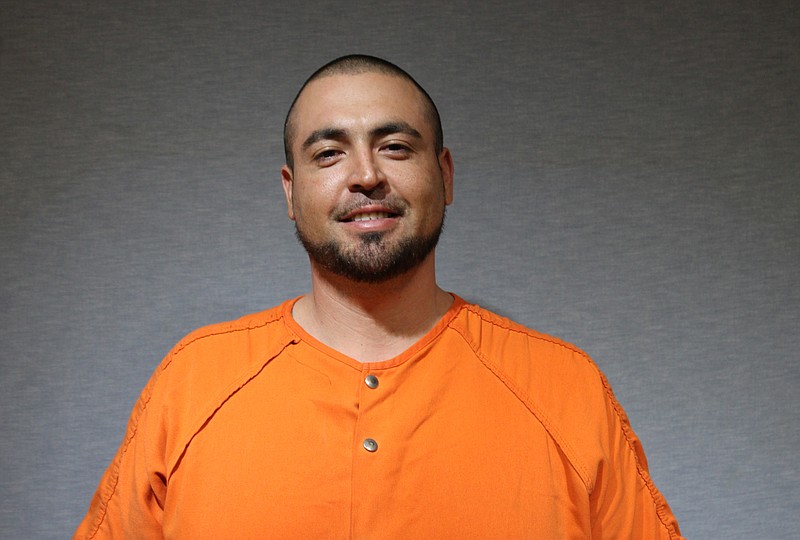 This undated photo released by the Garland Police Department, shows Richard Acosta Jr., 33, a resident of Garland, Texas, who has been arrested and charged with capital murder, accused of being the getaway driver in a shooting Sunday night, Dec. 26, 2021, at a gas station convenience store in the suburb northeast of Dallas. Dallas-area police have released a 14-year-old boy whom they had suspected in a weekend shooting that left three teenagers dead and a fourth badly wounded, saying the gunman is still on the loose. (Garland Police Department via AP)

GARLAND, Texas -- An attorney for a man accused of driving his son to a Dallas-area gas station store where the 14-year-old is accused of fatally shooting three teens and wounding a fourth says the father didn't know his son had a gun.

Attorney Heath Harris told The Dallas Morning News he believes evidence will show that 33-year-old Richard Acosta, who is charged with capital murder, is innocent.

"Our position is he didn't do anything to solicit or encourage his son to do this," Harris said.

Acosta's son, Abel Elias Acosta, has been on the run since the Dec. 26 shooting in Garland. Police have charged the teen with capital murder and warned that he is armed and dangerous.

Richard Acosta, who surrendered to police a day after the shooting, remained in Dallas County jail Tuesday on $3 million bond.

Surveillance video shows a shirtless boy or man with a handgun approaching the store in a crouching position. He swings the door open and shoots from the doorway.

Police said the shooter fired more than 20 rounds from a .40-caliber pistol before fleeing in the Dodge Ram pickup driven by Acosta, who they said also brought the shooter to the gas station.

Harris said he thinks evidence will show that Acosta initially went into the store alone to pick up medicine for his wife and that after he got back into his pickup, his son said he needed something and went inside alone. Harris said the father heard gunfire but didn't know the source.

Harris said the son was hysterical when he ran back to the pickup and the father drove them home. The son then got into a car and fled, Harris said.

Police named those killed in the shooting as 14-year-old Xavier Gonazalez, 16-year-old Ivan Noyala, and 17-year-old Rafael Garcia. A 15-year-old who was a cook at the store was taken to the hospital following the shooting and was expected to survive.

Investigators believe the shooting was a retaliatory attack on one or more of the people in the store, Garland police Lt. Pedro Barineau said.

Police initially took a different 14-year-old boy into custody, saying he was the shooting suspect. They released him to his family the next day and said he was not being charged.