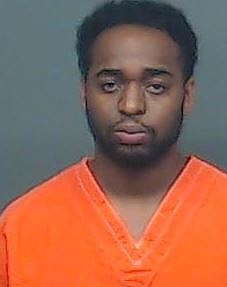 Dreylund Pierre Edwards, 27, appeared before 102nd District Judge Jeff Addison for arraignment Tuesday afternoon with a member of the Bowie County Public Defender's Office and entered pleas of not guilty to two counts of sexual assault. Addison agreed to the removal of a GPS ankle monitor which Edwards has been wearing since his release Oct. 27, 2020, on a $100,000 bond.

The most recent woman to accuse Edwards came forward after reading news accounts of his acquittal on a sexual assault charge Oct. 2, 2020, according to a probable cause affidavit.

The woman Edwards was found not guilty of sexually assaulting by a Bowie County jury in October 2020 testified that Edwards forced himself on her following a party at his house on Lambeth Circle in Texarkana, Texas, in August 2018. The woman who came forward after Edwards' trial alleges Edwards sexually assaulted her following a party at the same house on Jan. 31, 2019.

She alleges she went to the party with a friend who was dating Edwards' roommate, Hunter Holder. She reported that she has known Edwards for one to two years and that their relationship was a friendship that never involved romance or consensual sexual contact.

The woman alleges Edwards stopped her when she started to leave the night of Jan. 31, 2019, after drinking at the party, and offered to let her sleep on the living room sofa. The woman said she felt comfortable staying in the house "because she trusted them all."

The woman said she was roused from sleep by Edwards, who was kneeling beside the sofa and had his hand in her pants.

Despite struggling against him and telling him "No," Edwards allegedly continued to assault the woman.

The woman reported she immediately left the house once Edwards "finally left her alone."

At the time of the January 2019 alleged assault, Edwards was free on a $40,000 bond in the sexual assault case that ended in acquittal in early October 2020.

The woman reported that she did not immediately report the incident to police because Edwards assaulted her with his hands and mouth and she was unsure of the law. She told investigators that she thought what happened to her was an "isolated incident" until she read a news report about Edwards being acquitted.

"(The woman) advised that she does not want this to happen to anyone else," the affidavit states.

She allegedly provided Texarkana, Texas, police with text messages allegedly confirming she told the female friend with whom she went to the party about the alleged assault and texts she sent to Edwards confronting him. Edwards allegedly responded by calling the situation a "misunderstanding" and attempting to intimidate the woman.

Police also recovered text messages between the victim's female friend and Holder, Edwards' former roommate, discussing the allegations. Holder testified on behalf of Edwards at his trial in 2020.

Holder testified that he and Edwards are lifelong friends and when asked if he had ever known Edwards to "be untoward, be abusive or take advantage" of women, Holder responded, "Never."

Holder has been charged with aggravated perjury in connection with his 2020 testimony at Edwards' trial and the charge remains pending. Holder was arrested on the charge Nov. 6, 2020, and released the same day on a $15,000 bond.

Edwards faces two to 20 years on each count of sexual assault if found guilty of misconduct involving the second woman. He is scheduled to appear Feb. 1 before Addison for a pretrial hearing.