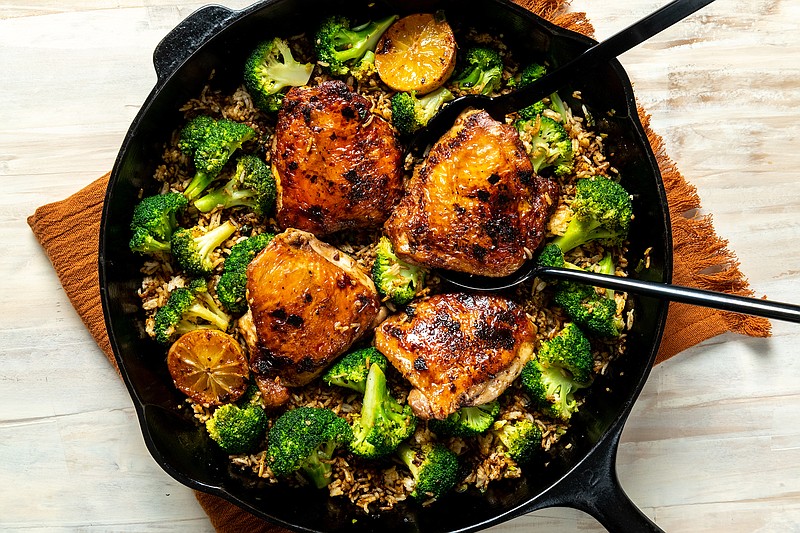 Chipotle Mayo Brick Chicken is a complete and clever meal in a pan. MUST CREDIT: Photo by Laura Chase de Formigny for The Washington Post.

Although cooking chicken under a brick goes all the way back to the Roman era, you'd think it was designed to fulfill a modern home cook's every hope for weeknight chicken.

In the old days, partially deboned or spatchcocked chicken was placed in a shallow terra-cotta vessel reminiscent of a cazuela, then topped with a terra-cotta brick called a mattone (hence the name of the dish, pollo al mattone). It was cooked over an open flame until the skin was crisped and the meat was juicy. Present-day versions are made on the grill, in the oven or on the stovetop.

The weight of the brick creates cheek-to-cheek contact of chicken to skillet, speeding up the cooking process and creating unabashedly crisp skin. And because the chicken is covered with this lid of sorts, the splattering typical in frying chicken thighs no longer decorates your kitchen. All these perks make pollo al mattone a tempting addition to the weeknight skillet chicken routine -- especially with a few tweaks.

Deboning chicken flattens it to provide more even contact between the chicken and skillet, which means more even cooking and browning. But the procedure requires, at least for me, watching some YouTube tutorial first. I opt for bone-in, skin-on chicken thighs to avoid the nervous dance of getting both the white and dark meat done but not overdone. I then cut slits into the skin all the way down to the bone, which helps the thighs lay flat in the pan.

With such direct contact between hot skillet and chicken skin, burning is a possibility. Nothing a little mayonnaise can't handle, though. Mayo acts as a preventive coating to anything that you'd like to brown, including grilled steaks, skillet chicken thighs and grilled cheese. As mayonnaise cooks, its own (contentious) flavor dissipates, but because it's a great carrier of flavor, any ingredients you stirred into it can cook and bloom without burning.

Take the recipe here: A chipotle-lime mayo is spread onto the chicken skin (another one of mayo's great attributes is it gloms to whatever it touches). If you'd only marinated the chicken with chipotle in adobo and lime zest, those ingredients could've singed, but not so in the mayo. Because mayo has oil in it, you don't need to grease the pan, which further reduces splatters. As if mayo hasn't already done enough for us, you can use extra chipotle mayo to drag pieces of chicken through.

The glorious byproduct of crispy skin is a skillet full of rendered drippings, which feels like more of a gift than the chicken itself. It's also the place to cook any side you want. Here, that's crisped rice with broccoli and scallions -- a sort of schmaltzy fried rice -- but it could also be carrots, broccoli, sweet potato or even beans.

This efficient little recipe provides many avenues for improvisation. Head outside and grill the chicken. Switch up the personality of the mayo -- maybe with salsa verde, grated lemon and garlic, barbecue sauce or miso. Use the rendered drippings in a salad dressing or to toast torn bread.

Such alluringly crispy, flavorful and speedy chicken can anchor many (indeed, centuries) of dinners.

Storage Notes: Refrigerate leftovers for up to 3 days. Gently rewarm in a skillet over medium-low heat

Bring a medium saucepan of water to a boil. Pat the chicken dry. Cut two slits all the way to the bone on the top of each thigh. Season with the 1/2 teaspoon of the salt and the pepper.

In a medium bowl, mix together the mayonnaise, chipotles and adobo sauce, cumin and lime zest. Spoon about half of the chipotle mayo into a small bowl, cover and refrigerate until ready to serve. Brush the remaining mayo on the skin of the chicken.

Place the chicken skin side down in the center of a large cast-iron skillet. Set the pan over medium-high heat, and cover the chicken with foil or parchment, pressing each thigh down against the pan. Place something heavy, such as another cast-iron skillet, a few cans or a brick, on top. Cook the chicken until opaque nearly all the way up the sides, 20 to 25 minutes, checking halfway through to make sure the skin isn't browning too fast. (If it is, lower the heat.)

When the water comes to a boil, add 1 teaspoon of salt and the rice. Cook, stirring occasionally, for 7 minutes, then add the broccoli and cook an additional 3 minutes, or until the rice is nearly al dente. Drain, rinse with cold water and shake as dry as possible. Set aside while you finish the chicken.

Remove the brick and foil or parchment from the chicken. Add the lime halves, cut sides down, to the pan. Flip the chicken, and cook until cooked through and the limes are charred, an additional 3 to 4 minutes. The internal temperature of the chicken should register 165 degrees on an instant-read thermometer. If not, remove the lime to a plate and cook the chicken for an additional 5 minutes, then check again.

Transfer the chicken and limes to a plate, leaving the fat in the pan. Add the scallions to the skillet and stir, scraping up browned bits, until fragrant, about 1 minute. Add the rice and broccoli, stir to coat in the chicken fat, then pat into an even layer. Cook until warmed and starting to crisp on the bottom, 3 to 5 minutes. Taste, and season with additional salt and pepper, if needed. Remove from the heat, and return the chicken and lime to the skillet.

Serve in the skillet, family-style, squeezing the charred lime over the chicken, with the remaining chipotle mayo on the side.