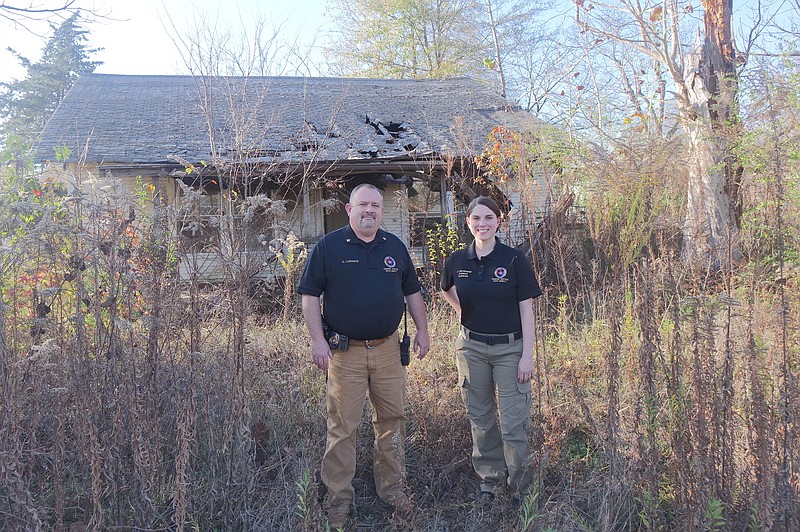 Linden police officers, David Lorance, left, and Jennifer Prosperie are in front of a dilapidated building little more than a block from the Linden Economic Development Corporation office itself and, perhaps, two blocks from city hall. It may soon be gone. (Staff photo by Neil Abeles)

LINDEN, Texas -- This little town is trying to clean itself up.

Every citizen here received a letter recently extending the hand of partnership in a drive to clear dilapidated buildings and grounds.

It's called "compliance," and Linden has a new employee whose main job is to sign citizens on for the effort.

But Zach Kennington is giving his job a new wrinkle. He's insisting the city be first in compliance with all of its required property maintenance items for upkeep and good looks.

"The City Council has voted unanimously to enforce our property maintenance program," Kennington said. "That's called code enforcement. We call it compliance because we're going to go to dilapidated property owners and seek their cooperation to clean up their grounds. But we're going to do our part."

At this point City Manager Lee Elliott chimed in.

"We can't have the grounds of our lift stations needing to be mowed, our street signs unreadable, our vehicles out of license, our equipment yard in a state of mess and ask citizens to do their part. We would be hypocritical if we as a city didn't do our part," Elliott said.

Elliott said the city has already painted its fire hydrants and police station, has new signage for the economic development office and painted its parking area, too.

"These are small items but there's more to come," Elliott said.

"For example, we'll begin with our TxDOT roads which I am calling our Gateway Roads. These are our state highways 11, 8 and 59 which are arterial streets into our town. We'll start by making sure everything is right and looks good about them.

"Then, the City Council will pick an area of the town, and we'll go there and do street and drainage work, do our part and more to partner with the residents to make that area a place industry or other citizens would want to come to.

"It's the only way for us as a town to get better. You start with the things you can control," Elliott said.

"We want the public to see us as partners, too. We'll work to make the areas are safe, that means property inspection and improved response time for emergency personnel and vehicles," Lorance said.

"Sometimes an overgrown yard may turn turn up snakes, rusting vehicles or unhealthy sewerage on the grounds," added Jennifer Prosperie, office administrator and evidence technician for the Linden Police Department.

"Know that we have an open door policy at the police department. We want you to come by," Lorance said.

"That means property owners who take care of property are subsidizing those who don't," he said

The city is also going to consult tax attorneys to clear tax rolls of property owners who live away and don't especially care about their Linden properties and paying taxes.

And in a final positive point, Elliott noted that the city's sanitation service, Sanitation Solutions, under a new contract is going to provide citizens blue poly-cart refuse receptacles.

"And in that contract they will take down four dilapidated structures for us. They have the equipment to do such things as that, and we have a list of such properties which need removal," he said.

"Our point is this. If we want people to come to Linden will they do it if the town doesn't look well, if it looks uncared for?" Elliott asked. "Would we ourselves invest in such a place?"

(Linden is about 40 miles southwest of Texarkana on U.S. Highway 59.)

An outstandingly bad example of pride and upkeep in Linden is this fallen roof on West Houston street. In the distance, three town leaders are part of an effort to change such scenes as this. (Staff photo by Neil Abeles) 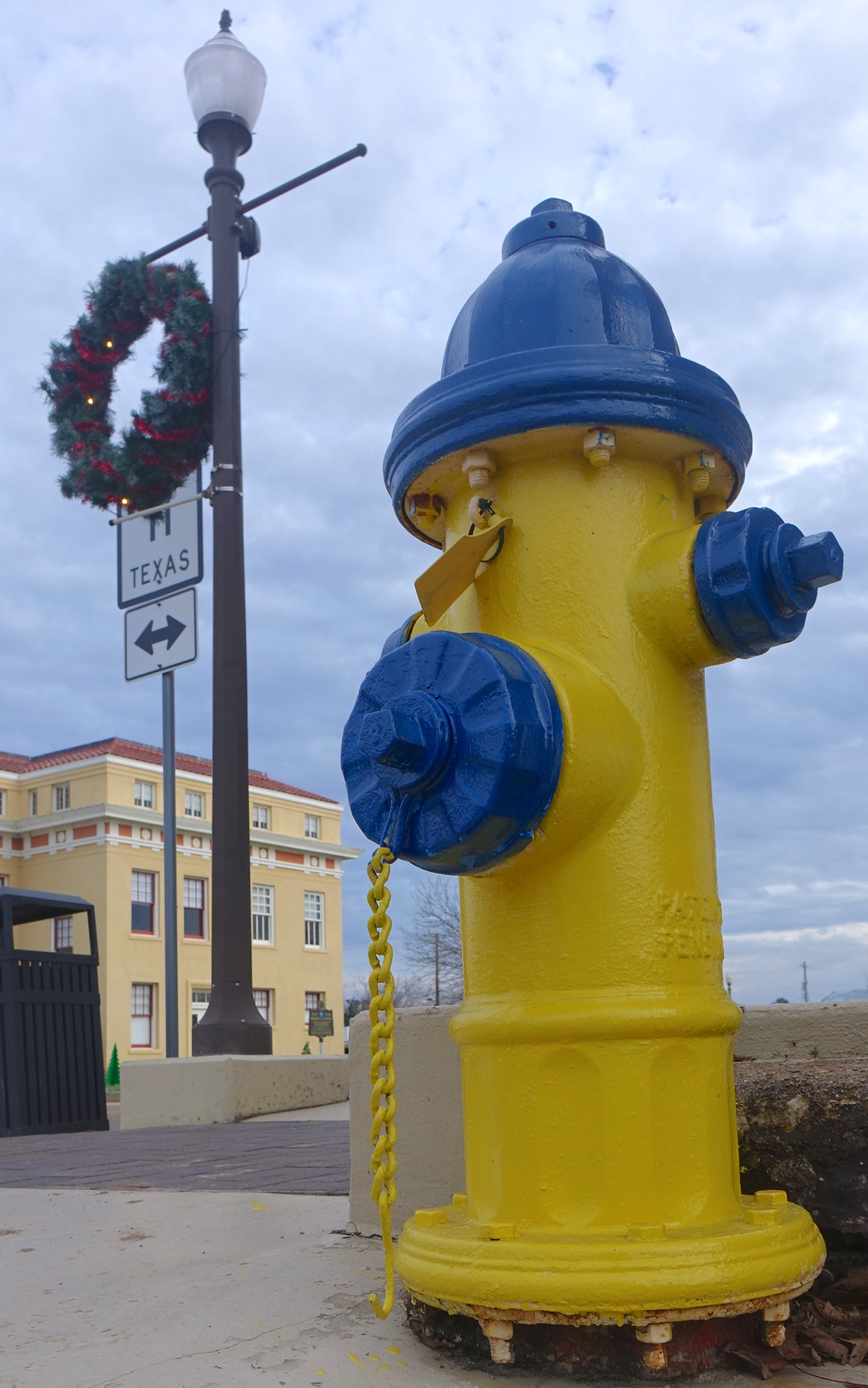 This sparkling new yellow and blue fire hydrant on the square in Linden is really a symbol of a new clean up and spruce up effort in Linden being encouraged by city leaders. (Staff photo by Neil Abeles)

David Lorance, Jennifer Prosperie and Lee Elliott are standing with this marker to show the LEDC’s new sign and also its newly painted parking lot at left which are examples of the town’s effort to improve the town’s image. (Staff photo by Neil Abeles) 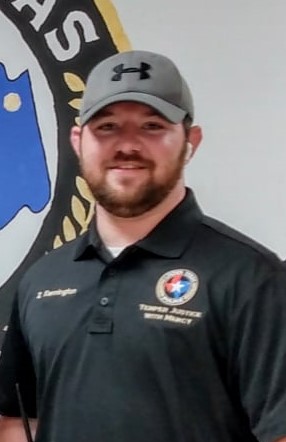