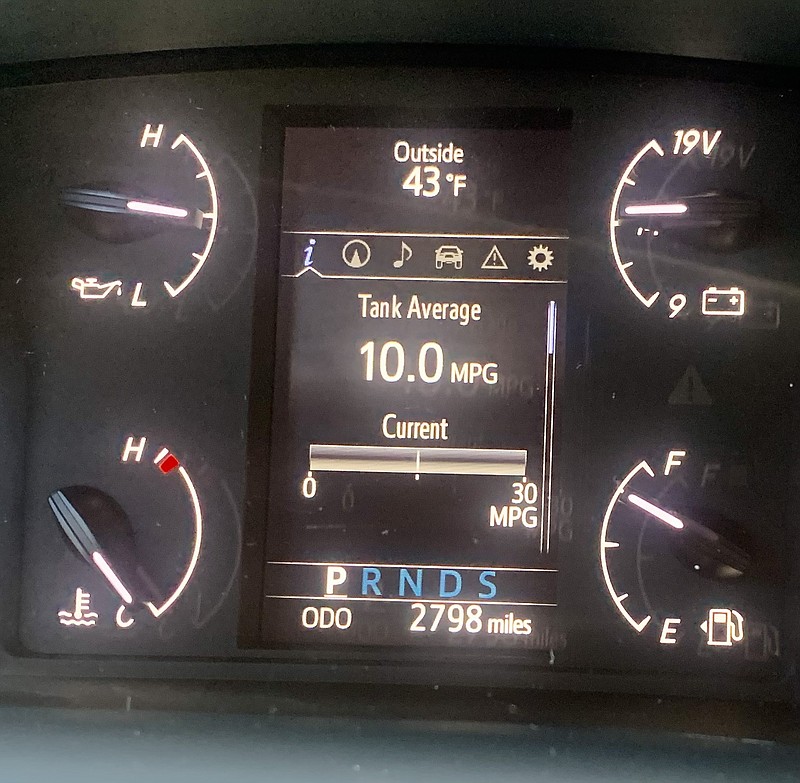 You can gripe about high gas prices or you can drive a Toyota Sequoia, but you don't get to do both.

For the record, we're talking about a 2022 Sequoia, which starts around $50,100 but shoots into the $60,000 to $70,000 range as soon as one adds 4-wheel drive and other desirable features, but we could be talking about any Sequoia since 2007, which was the last time Toyota engineers took pencils and calipers to the product.

The difference is that today most large SUVs are powered by turbocharged V-6 engines with 10-speed transmissions and get 20+ miles per gallon. Our 2022 Sequoia tester, with a 5.7-L V-8 and 6-speed automatic, averaged 10 mpg in town and only reached 15 mpg on the highway after we switched to 93-octane, leaded fuel, which sold for 3.59 a gallon. Quantitatively, that was a good deal. We paid 21% more for gas but got 50% more out of it.

That means that filling the Sequoia's 26.4-gallon tank is a $94.78 proposition that happens with great frequency. A round-trip to Little Rock, for example, required two fill-ups. A seven-passenger Toyota or Chrysler hybrid minivan, by way of comparison, would consume less than 1/3 of that. Even a Jeep Wagoneer or Chevy Tahoe would cut that by a quarter. A similarly priced but better equipped Ford Expedition would do better.

"Wait, wait," you are probably saying, "that's not fair. The three-ton, body-on-frame Sequoia is a Toyota so it's a much better vehicle."

Not so fast, my friend.

To be sure, like its sibling, the full-size Tundra, a well-maintained Sequoia is mechanically bulletproof, capable of going a quarter-million miles or more with relative ease. With up to 7,000 lbs. in towing capacity, certainly, the big Toyota is the first choice for those who regularly drag around heavy objects. One wonders, of course, just how much heavy-duty towing occurs in the life of these vehicles, which might be purchased more for how they make someone feel than what they do.

The latter was the case for Beautiful Bride as we wound our way back from Little Rock in a cold, driving rainstorm on the Highway to Hell that is Interstate 30. While in the passenger seat, she is prone to slamming imaginary brakes, twisting and contorting to use body language to coax the vehicle away from perceived hazards, and to make utterances not unlike a frightened puppy, she chose to remove herself to the plush, full adult-sized comfort of the Sequoia's middle row while I played Snoopy to the truckers' Red Barons.

Immersed in phone activities and coddled by the Sequoia's plush, if bouncy ride, she was able to endure the journey in relative comfort and I in relative quiet. We both felt quite safe.

In almost every other measure, however, the Sequoia is woefully behind the times. The interior is roomy but filled with hard plastics. The engine is powerful, but at highway speed, it drones out an upscale sound system and turns cabin conversations into shouting matches. A teeny, 7-inch infotainment screen seems like something boosted from a VW bug, ridiculously disproportional in a big, pricey SUV.

Our $63,000 TRD pro lacked common touches like a power liftgate, parking sensors, and a functional lane-keep assist system. Oh, it would irritatingly warn that the vehicle was veering out of its lane but would take no action as one meandered into a ditch or the side of an 18-wheeler. A lane-keep system that only beeps is a system that spends its life in "off" mode.

Beyond that, the Sequoia's safety gear is up to snuff, with important features like blind-spot monitoring, dynamic cruise control, automatic high beams.

With goodies like all-speed four-wheel drive and internal bypass Fox shocks, which are smooth on the highway and firm off, the TRD Pro is an appealing package. Given the vehicle's weight, however, we would recommend staying off the rocks and out of the mud and sand. The ratio of weight to traction is one of those laws of physics one is well advised to observe.

It is an error in our thinking that mass equates to safety. It is born of our days on the playground, where we observed that when big kids run into little kids, little kids suffer. We over-generalize that with motor vehicles, where hidden skills like torsional rigidity, crumple zones, stability controls, and the ability to avoid wrecks altogether are much more important survivability variables.

So it is that so many of us spend more money on massive, gas-guzzling, rollover-prone vehicles to haul our families, when lighter, safer, less expensive, and more fuel-efficient choices abound. If you do need to haul frequently, the Expedition is the only choice in this market niche, at least until Toyota takes the Sequoia back to the drawing boards. 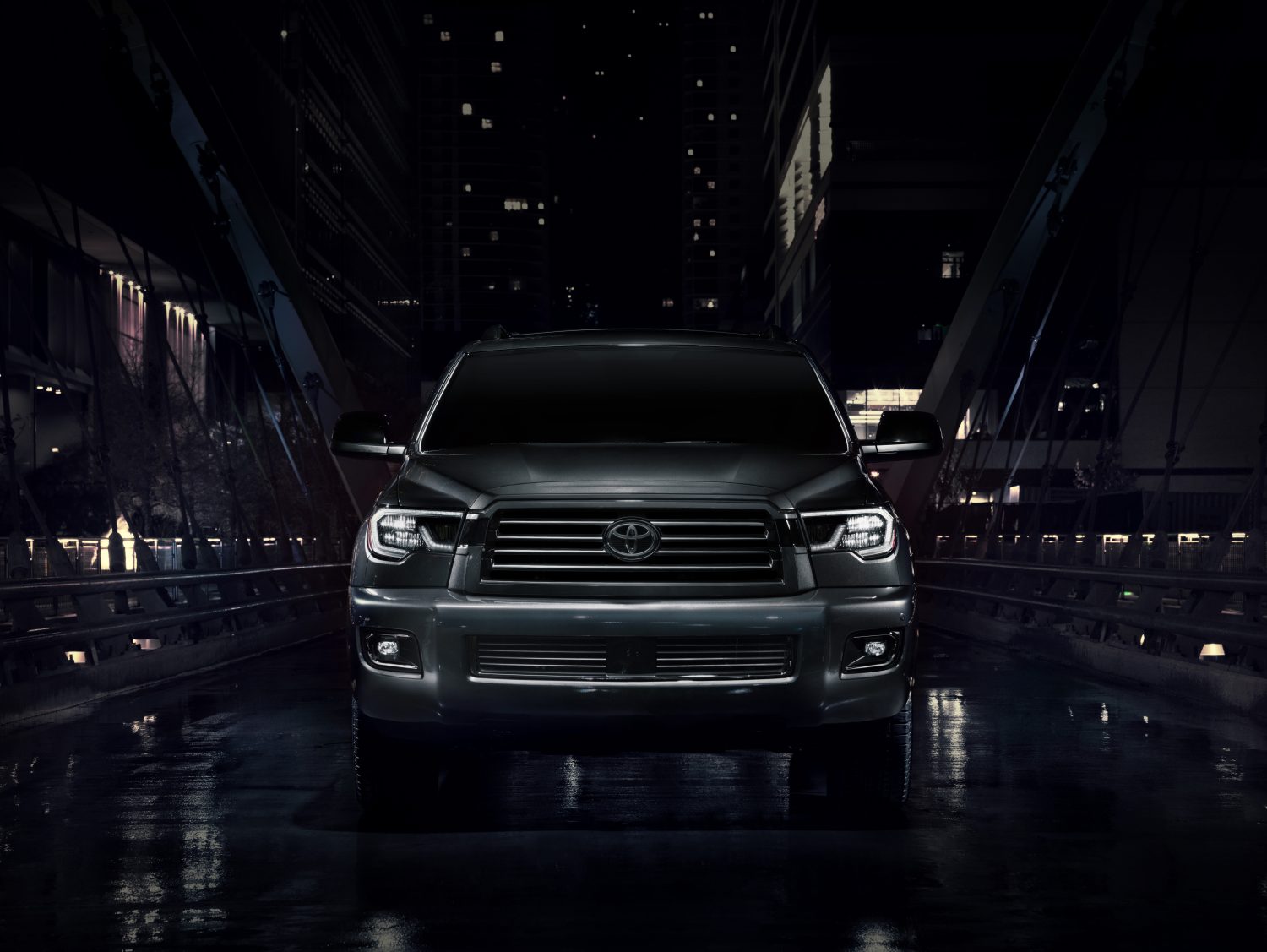 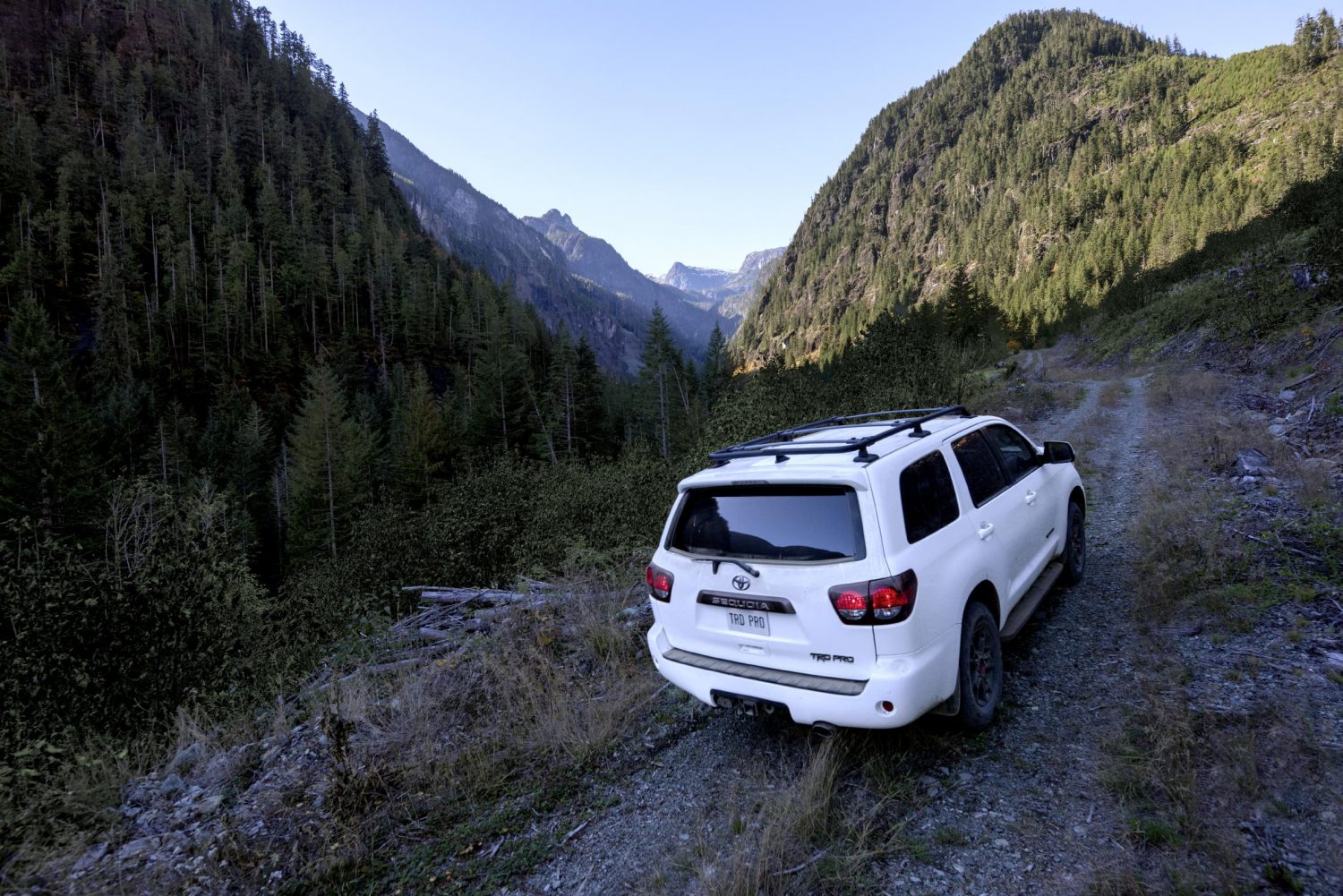