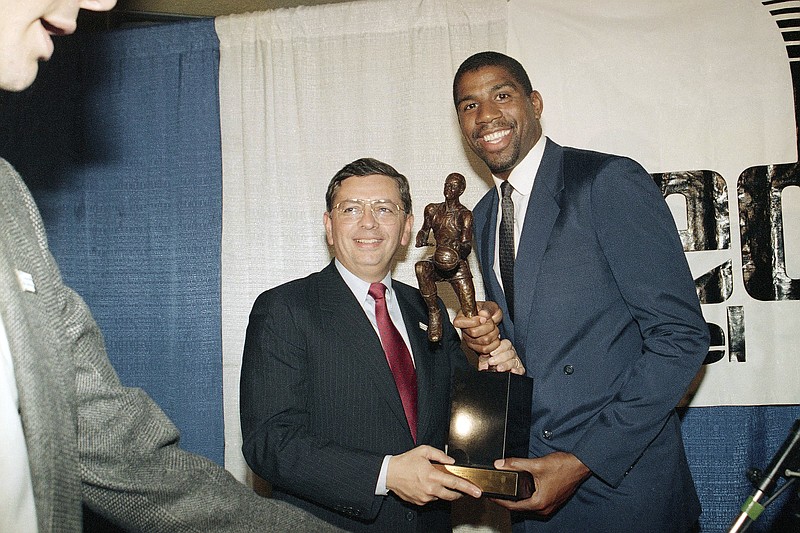 FILE - Earvin &quot;Magic&quot; Johnson breaks stands with David Stern, commissioner of the National Basketball Association, May 18, 1987, at the Forum in Inglewood, Calif., after Johnson was named the NBA's Most Valuable Player for 1986-87 season. (AP Photo/Alison Wise, File)

The NBA had enormous problems. Drug abuse among players was believed to be rampant. Many arenas were half-empty or worse on game nights. Most franchises were losing money. Some were on the cusp of folding. And when games were on television, nobody was watching.

"This league," Hall of Famer Jerry West said, "was in trouble."

Saviors, a lot of them, were coming.

There were stars so bright they could go by just one name: Doc, 'Nique, Michael. Another was a bespectacled short man in a suit and wing-tips, someone who changed the game without ever dribbling or shooting a basketball.

But change truly began with two other members of the one-name-only-needed club; a flashy Black standout with a skillset that the hoop world had rarely if ever seen alongside a quiet white phenom who could shoot from anywhere.

Magic and Larry. Black and white, West vs. East, Lakers vs. Celtics.

The 1980s became a transformative decade for the NBA, which is celebrating its 75th season. Television audiences reached new heights, the financial picture changed and the league -- instead of shedding teams -- expanded into new markets. People were putting VCRs in their homes, and the league came up with an entity called NBA Entertainment to give basketball fans with those devices plenty of content.

"At the start of that decade, I think the NBA was in a very difficult spot in terms of its stature and its relationship with fans, networks and sponsors," said Russ Granik, who was one of the NBA's top executives at the time. "And by the end of the '80s, I think things had changed pretty dramatically."

There were stars in all corners of the country: Julius Erving in Philadelphia, Dominique Wilkins in Atlanta, Jack Sikma in Seattle, and by the midpoint of the decade Michael Jordan was headed to Chicago.

"The 1980s were a pivotal turning point," Erving said. "But we didn't forget about the shoulders we were standing on."

The springboard for much of that growth can be traced back to Magic Johnson and Larry Bird, at first rivals who couldn't have seemed more different, then friends who realized they brought out the best in one another.

Their battles began at the 1979 NCAA championship game, Michigan State vs. Indiana State, and they were joined at the competitive hip ever since. They would go head-to-head three times in the NBA Finals, and all 10 championship series held that decade included either Johnson's Los Angeles Lakers or Bird's Boston Celtics.

"The Lakers and the Celtics, they were about as hated rivals as you could have in any sport," said Pat Riley, who coached the Lakers for much of the 1980s and now is president of the Miami Heat -- one of the expansion teams that arrived in the NBA in the late 1980s.

The race component was an added complexity to the Magic-Bird storyline.

Bird was "the hick from French Lick," the aw-shucks guy from a small town in Indiana who often said he couldn't run or jump. In a league comprised of predominantly Black players, he was the Great White Hope. And the Celtics -- which had two elite white players in Bird and Kevin McHale -- also just happened to play in a city that had been rocked by violent, racial protests in the 1970s and 1980s as public schools were forcibly desegregated through court order.

At times, opposing players made their stance clear. In the 1987 playoffs when the Celtics ousted Detroit, two Pistons -- Dennis Rodman and Isiah Thomas -- suggested there was a double standard when it came to Bird's place on the basketball landscape.

Rodman suggested if Bird was a Black player, he'd be considered less of a star. Thomas added that Bird "is a very, very good basketball player. I think he's an exceptional talent. But I'd have to agree with Rodman. If he was Black, he'd be just another good guy."

The Pistons watched the Celtics head to the NBA Finals to face the Lakers again with racial issues continuing to divide the country -- as they still do. But the respect Bird and Johnson had for one another demonstrated on a national platform how people of different races and backgrounds can compete, be rivals even, and still coexist.

Pulling it all together for the country to witness was the unconquerable David Stern.

He became NBA commissioner in 1984, inheriting control of a league some in corporate America -- and probably regular America, too -- thought was too Black, too drug-addled, not mainstream enough to command a significant piece of the sports landscape. Stern knew for the game to grow, it had to get in front of eyeballs, and the way to do that was television, especially with cable beginning to take root at that time.

"I think it was '83-'84, we only had like three CBS games scheduled for the whole season, so it was not a time of splendiferous attendance or focus," Stern, who died in 2020, said at an All-Star Game several years ago. "It was very much our world. ... It was a good time, though, because it was Larry and Magic. But it was also -- and people tend to forget about it, there were Hall of Fame teams at that period of time."

The league finally had a product to sell, and stars were becoming pitchmen. By the end of the decade, Spike Lee was Mars Blackmon, asking Jordan if it had to be the shoes. But that wasn't the first footwear phenomenon of the 1980s; Bird, Erving and Johnson starred together in a Converse ad, light-heartedly fighting about who the shoe was designed for.

Erving was asked to help endorse everything from lip balm to soda.

"And actually, I ended up becoming a Coca-Cola bottler during that time as an entrepreneurial deal," Erving said. "It was kind of an extension of the ABA, one for all and all for one."

And it was happening fast. Stern was an executive vice president for the NBA in the early 1980s when a landmark revenue-sharing agreement was struck, one where players would get 53% of the gross. When he became commissioner, players already liked him.

"I don't think I could ever envision things being what they are right now. I didn't have that type of vision," Erving said. "But the players, I think David Stern's willingness to make a deal for a percentage of the gross, that was the big kahuna. The gross, I think in any business deal if you can get a percentage of the gross instead of a fraction of the net, you're going to do all right."

Bird, Erving and Johnson were all champions by the midpoint of the decade, and in Stern's first draft as commissioner, he saw a treasure trove of talent -- Hakeem Olajuwon, Jordan, Charles Barkley and John Stockton, among others -- enter the league at once.

The dollar figures -- what teams are worth, what they sell for, what players make -- have soared every since.

"David Stern is the reason why the league is in the position that it is in today," said Wilkins, named one of the Top 75 players in NBA history. "He started taking the game global. We were the first team, the Atlanta Hawks, we were the first NBA team to play international basketball. We played against Russia. We played two games over in Moscow. That all was David Stern, really introducing the NBA game worldwide."

It was a meteoric turnaround. For unsteady as the NBA's footing was early in the decade, with the influx of talent and Stern's guidance, the league -- just like Magic and Larry -- did a lot of winning in the 1980s. 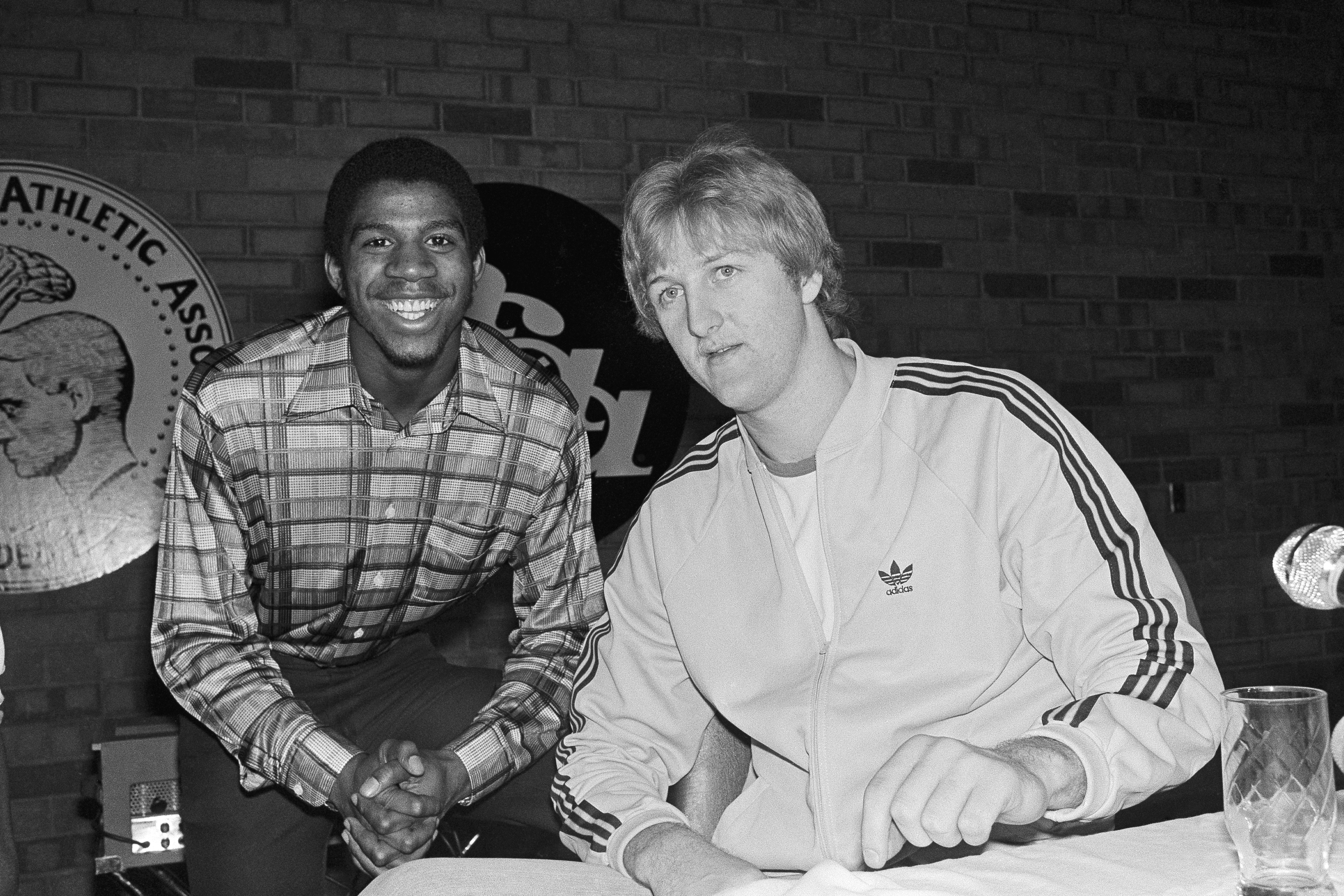 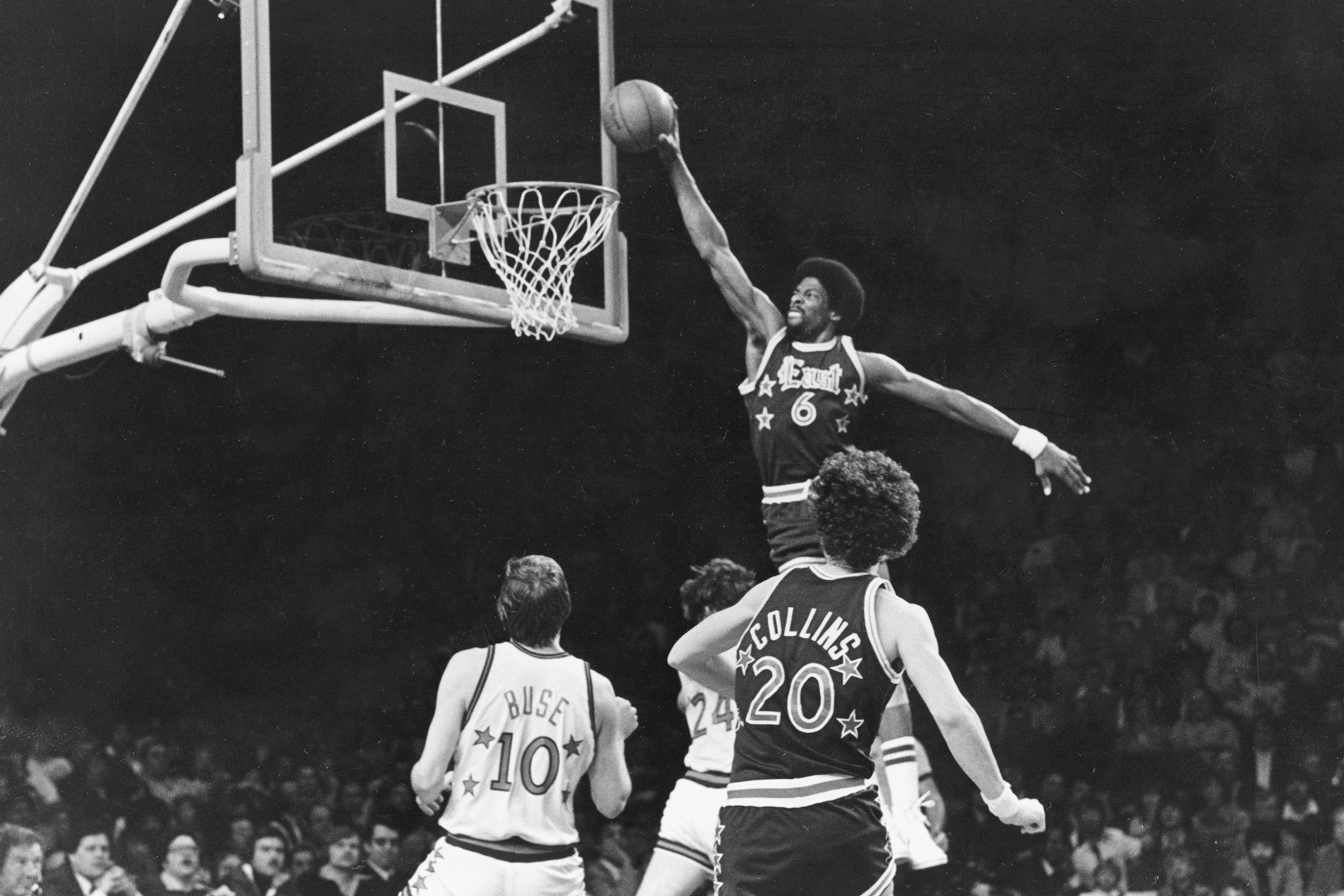 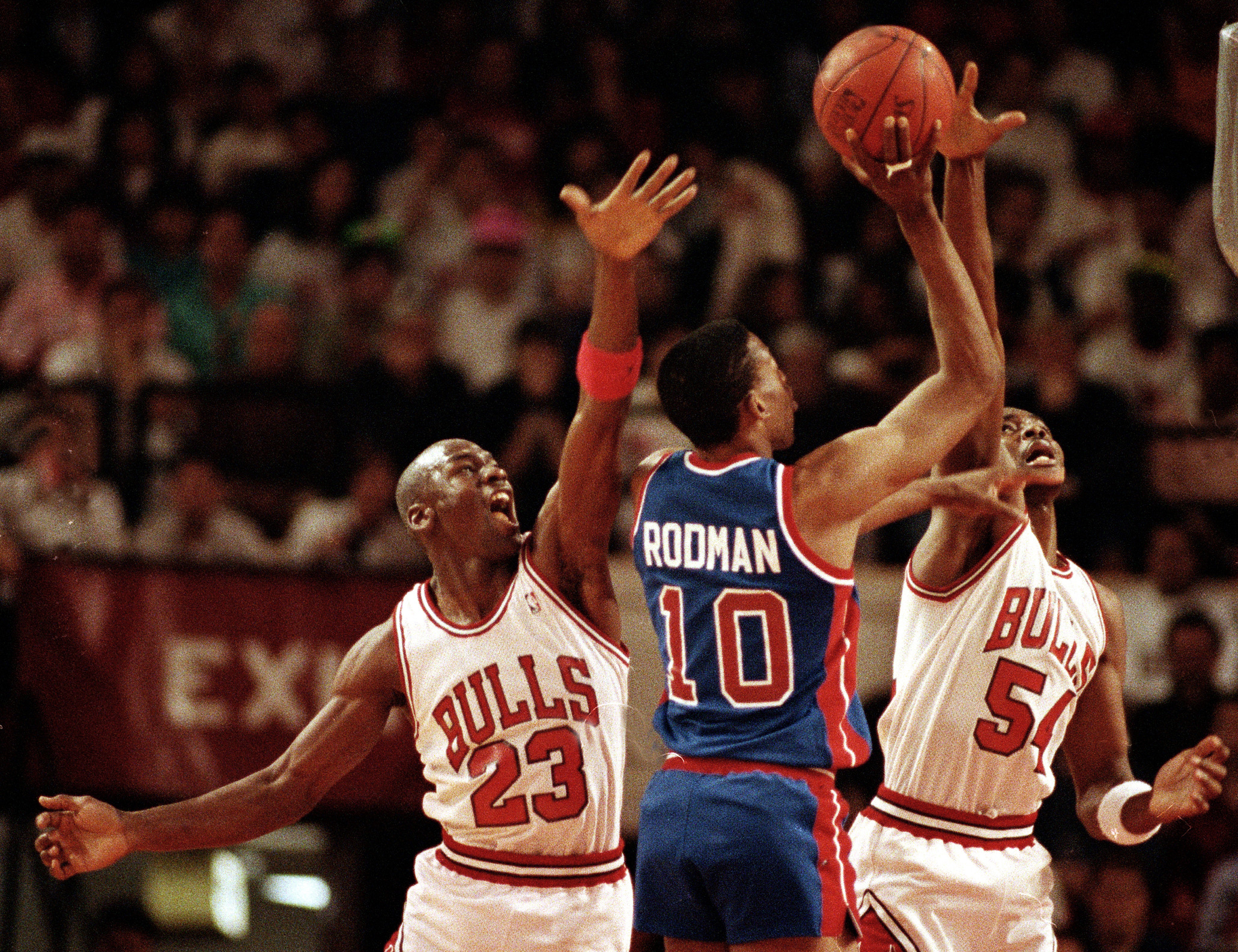 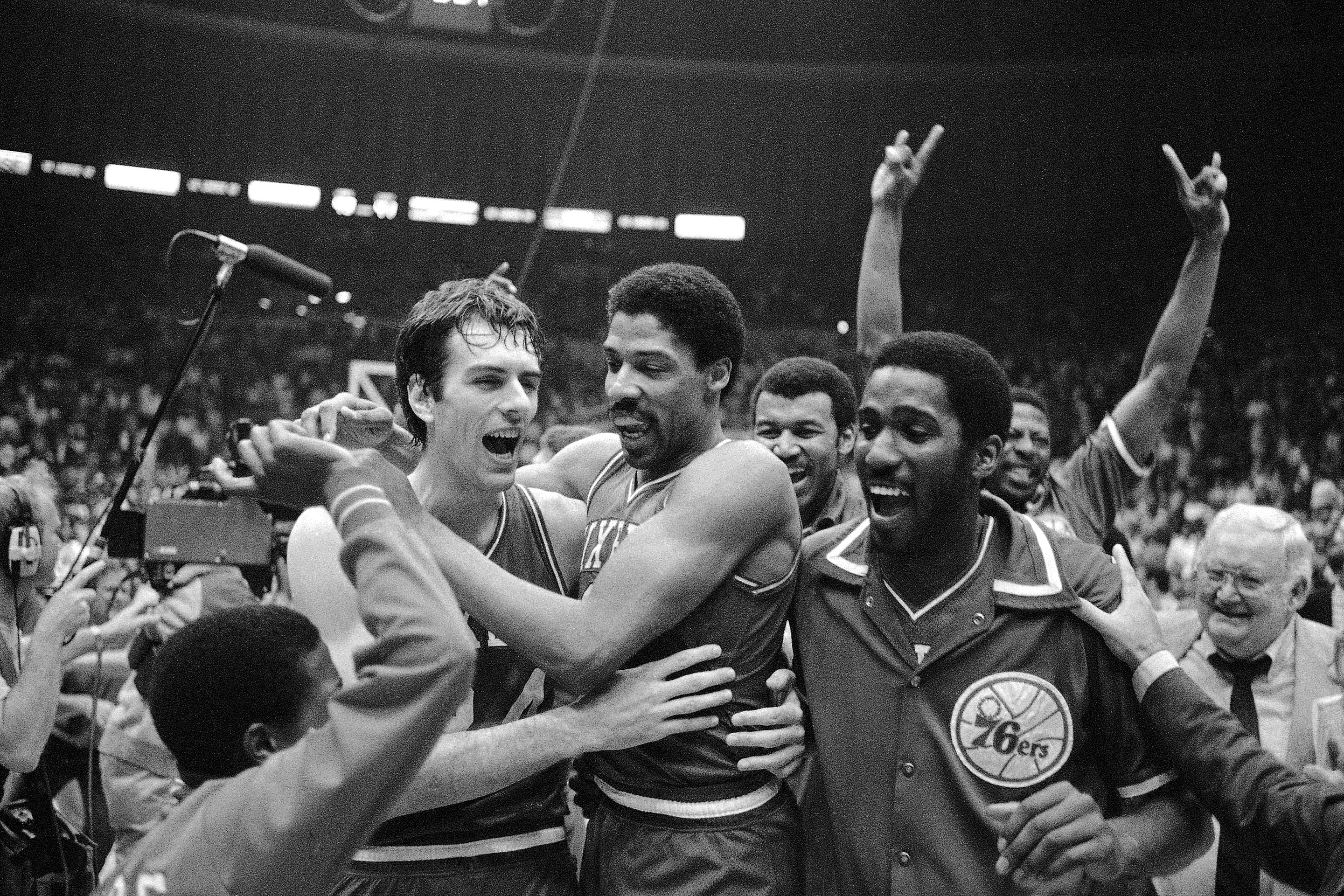 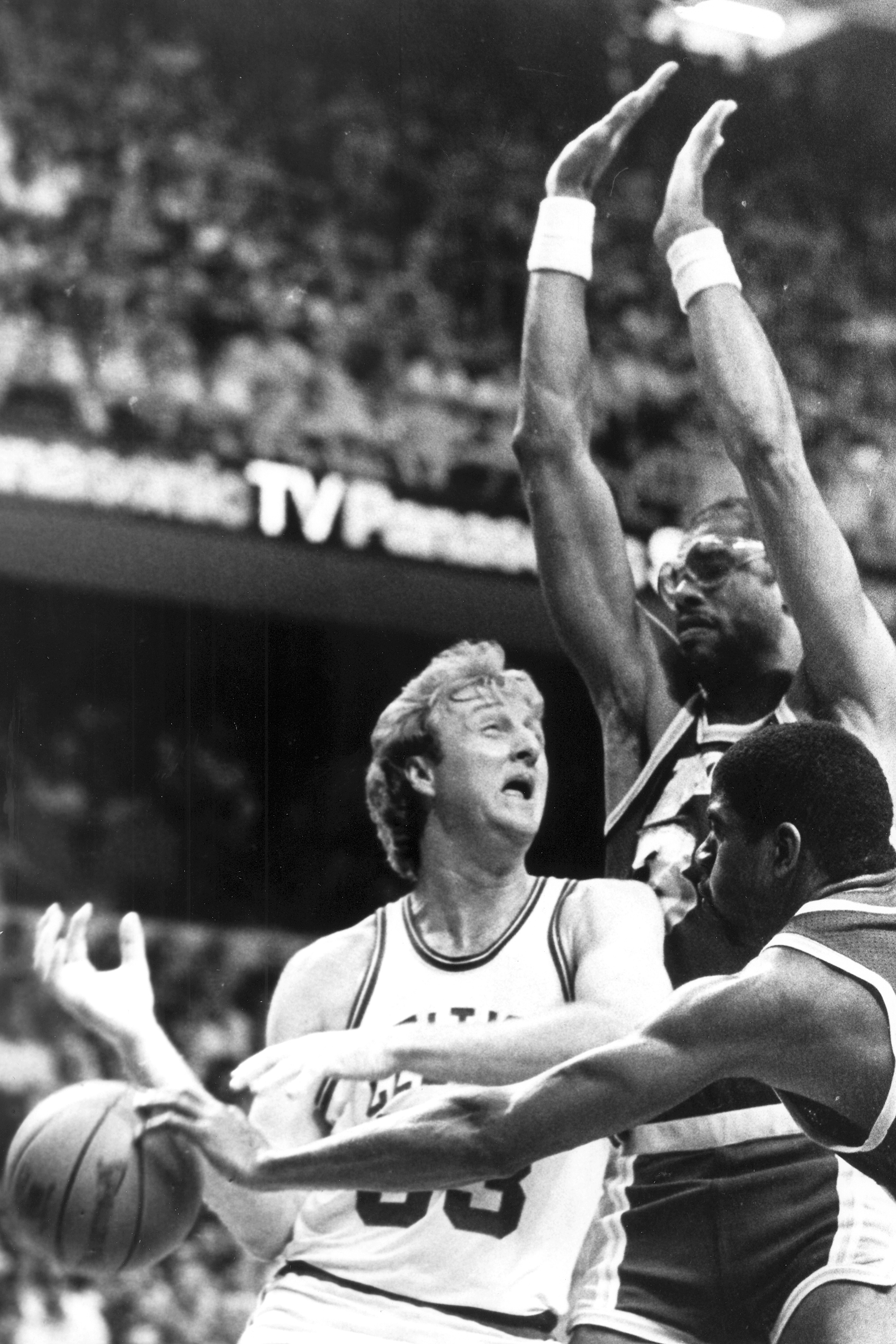 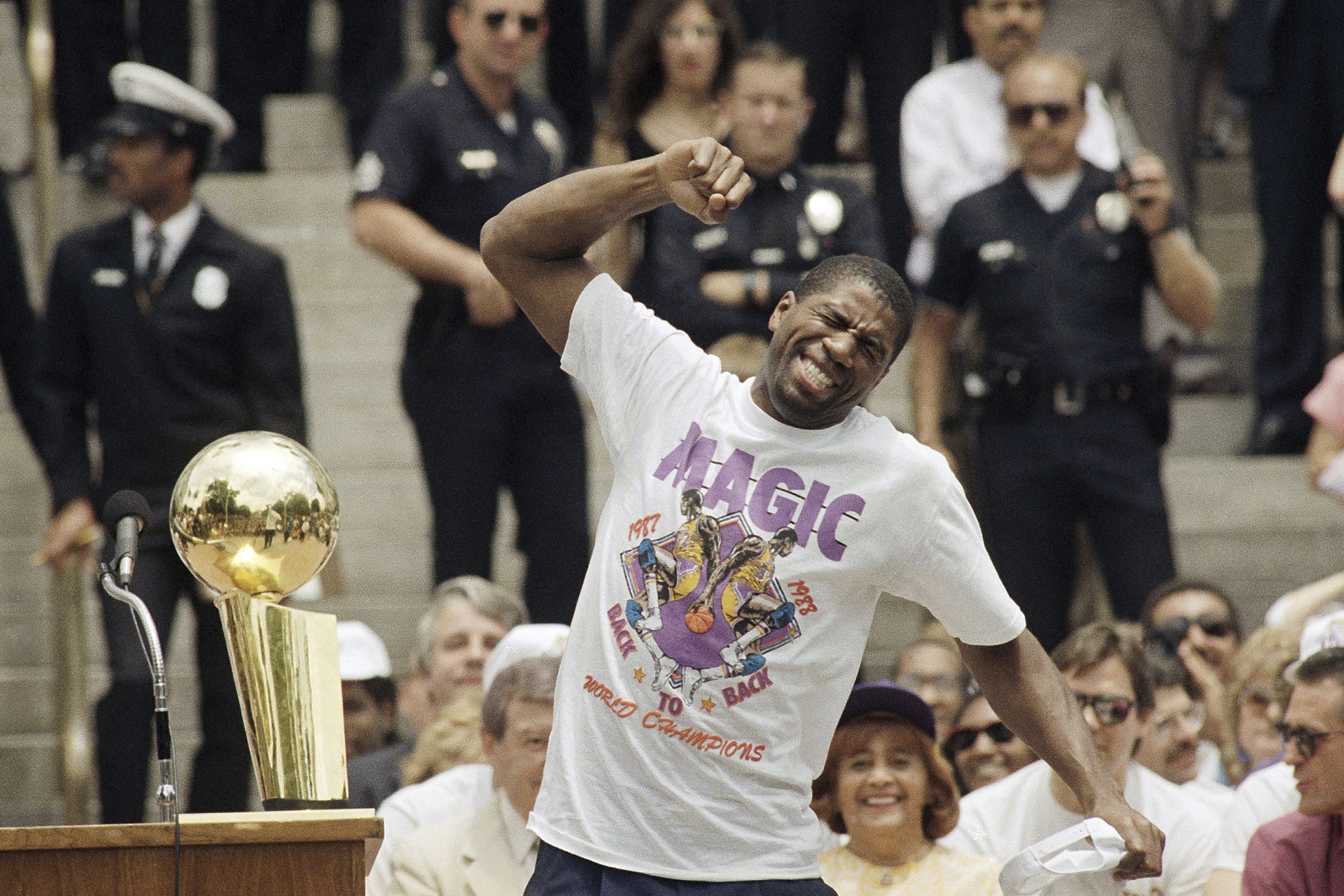 FILE - Los Angeles Lakers' Magic Johnson reacts to the crowd of nearly 38,000 fans as the team's victory celebration was under way on the steps of City Hall in Los Angeles, June 22, 1988. (AP Photo/Nick Ut, File) 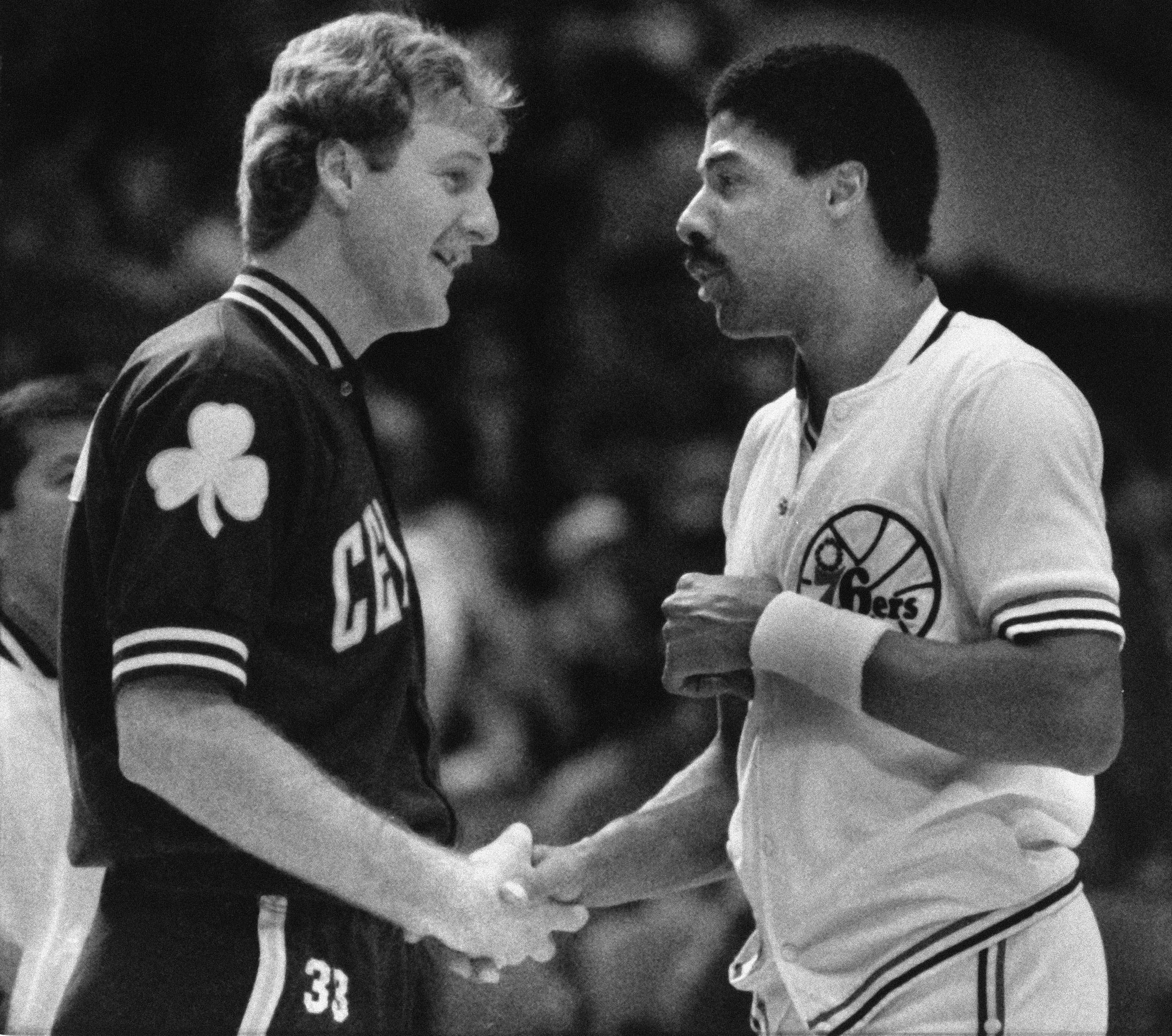 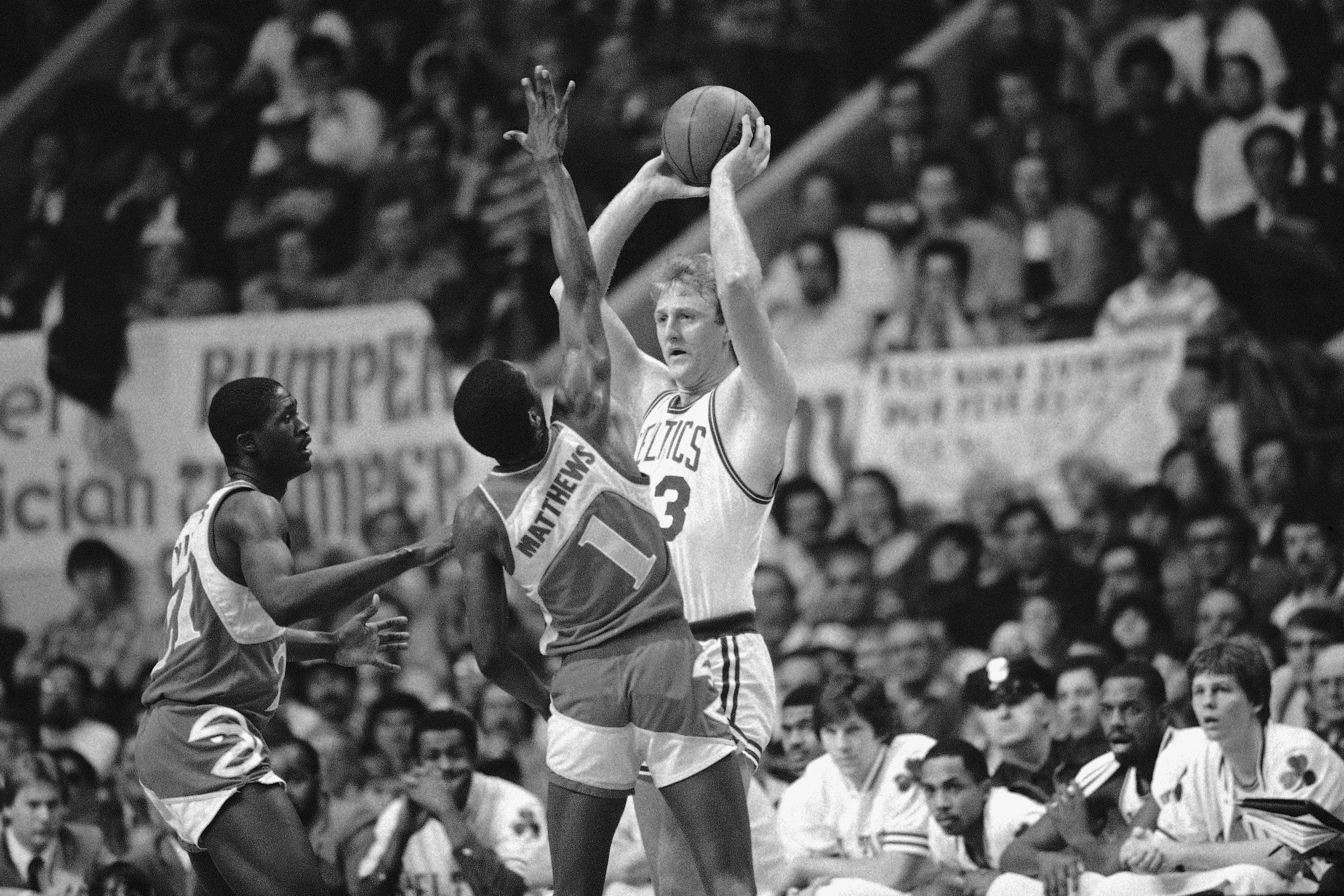 FILE - Larry Bird of the Boston Celtics, right, is defended by Wes Matthews, of the Atlanta Hawks, left, in second half NBA playoff action at Boston Garden, April 20, 1983. Bird led all scorers in the game with 26 points as Boston defeated Atlanta 103-96 to take a 1-0 lead in the best-of-seven series. (AP Photo/Mike Kullen, File) 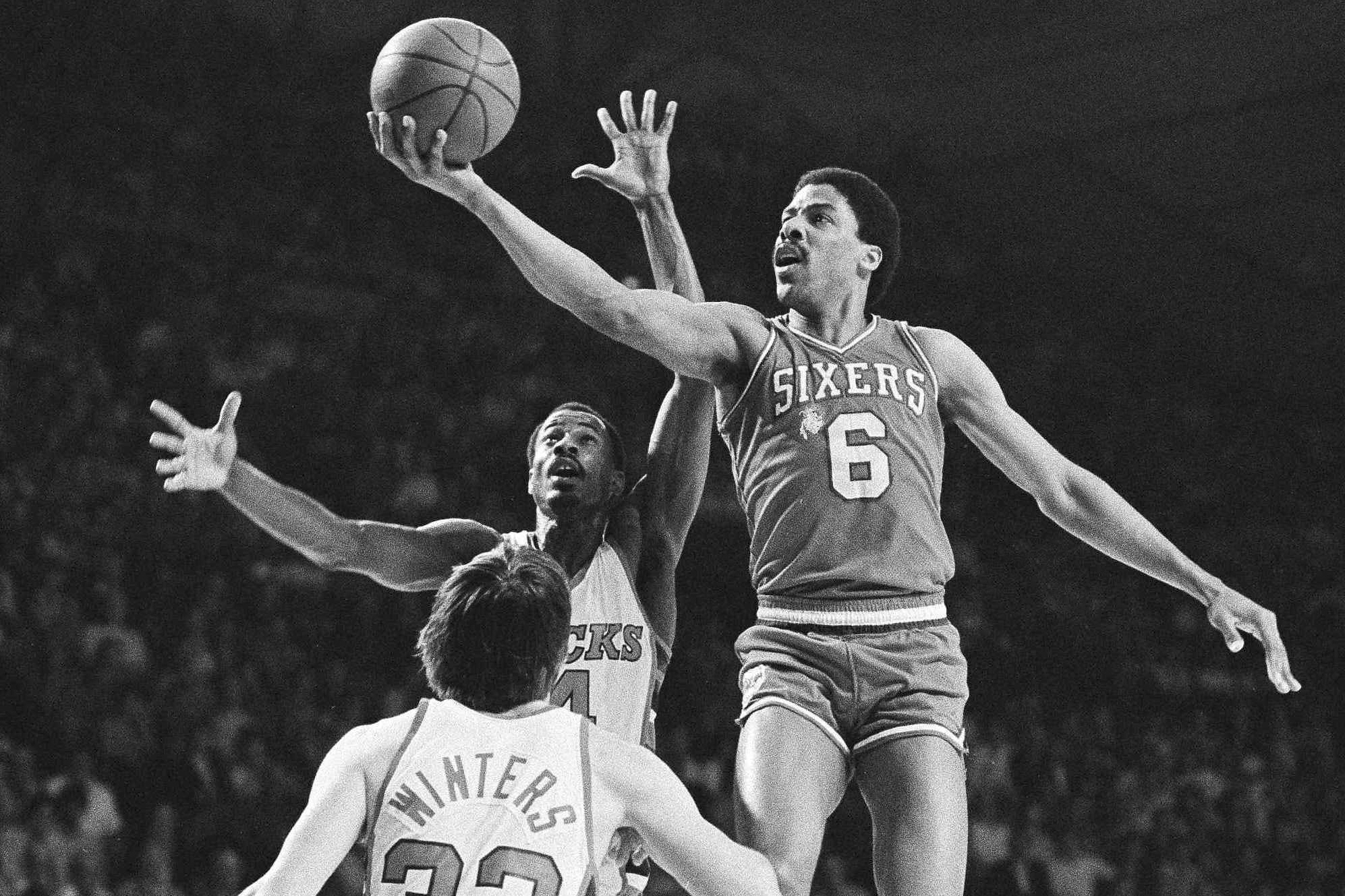