Attacks on America's Jewish community on the rise long before Colleyville, experts say 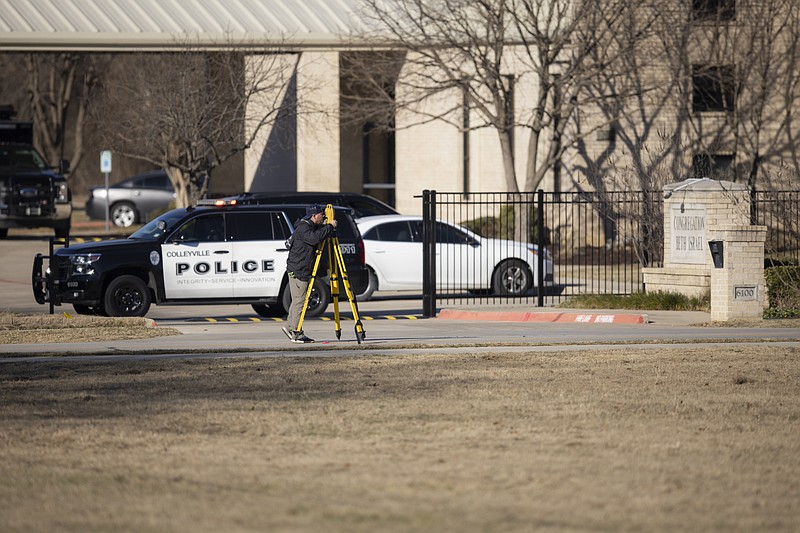 Law enforcement process the scene in front of the Congregation Beth Israel synagogue, Sunday, Jan. 16, 2022, in Colleyville, Texas. A man held hostages for more than 10 hours Saturday inside the temple. The hostages were able to escape and the hostage taker was killed. FBI Special Agent in Charge Matt DeSarno said a team would investigate &quot;the shooting incident.&quot; (AP Photo/Brandon Wade)

FORT WORTH, Texas -- The hostage standoff inside a Colleyville synagogue Saturday reignited fears of antisemitic violence with news headlines that circled the globe. But for many Jewish Americans, the threat of such an attack -- even at a small-town synagogue in North Texas -- is something they live with every day.

Nearly 1 in 4 Jewish people in America say the institutions they are affiliated with have been the target of antisemitism within the last five years, according to a report in October from the American Jewish Committee.

Across the country, 2,557 antisemitic incidents were reported from 2020 to 2021, according to data gathered by the American Defamation League.

The threat is real enough for many congregations to undergo professional security training. That was the case for the Colleyville Beth Israel congregation, where hostages, including the rabbi, were held for hours before escaping unharmed. The synagogue underwent training five months ago. On Sunday, Rabbi Charlie Cytron-Walker urged other Jewish communities to similarly prepare to protect themselves.

"Over the years, my congregation and I have participated in multiple security courses from the Colleyville Police Department, the FBI, the Anti-Defamation League, and Secure Community Network," Cytron-Walker said in a statement. "We are alive today because of that education. I encourage all Jewish congregations, religious groups, schools, and others to participate in active-shooter and security courses."

"It has been confounding to us that until more recently, the general community has not seemed to be woken up to it," Schwitzer said.

'Not the first time'

Halie Soifer, CEO of the Jewish Democratic Council of America, grew up in the same synagogue as Cytron-Walker in East Lansing, Michigan. Throughout Saturday, she kept in touch with Cytron-Walker's sister about the standoff.

"Based on reports, it appears that Rabbi Charlie's strength and leadership was vitally important during this ordeal," she said. "Knowing the kind of leader that he is, this doesn't surprise me at all. He's a leader not just in the Texas Jewish community, but nationally."

The attacker, identified Sunday as 44-year-old British national Malik Faisal Akram, held Cytron-Walker and three other adults hostage for hours. He reportedly spoke to law enforcement about his demand for the release of Aafia Siddiqui, a woman convicted on terrorism charges who is incarcerated at a federal prison in Fort Worth. The service at the synagogue was livestreamed, and some of the hostage-taker's rants were audible.

"I think it is very clear the perpetrator of this attack was motivated by antisemitism," Soifer said. "While the details are still coming together, the remarks that he made while he was streamed on Facebook live made it clear that he targeted the Jewish community. He made it clear that he was trying to help with the release of a known antisemitic terrorist. So there is no mistaking the motivation of this attack. And it's not the first time."

In 2018, 11 people were killed at the Tree of Life synagogue in Pittsburgh. In response to Saturday's attack, Tree of Life Rabbi Jeffrey Myers said in a statement that the Jewish community knows "all too well the sorrow and fear that such heinous attacks hold for each of us."

In October, a college student set a synagogue on fire in Austin. The next month, antisemitic graffiti was spray painted around an Austin high school. In Missouri City, Texas, antisemitic flyers were scattered on residential driveways in December.

A lack of media coverage over antisemitic attacks contributes to the public's lack of awareness, Soifer said.

"Of course incidents like (in Colleyville) do receive quite a bit of attention, and it's almost as if the whole country's attention was focused on the events unfolding at Beth Israel," she said. "But it should not take this threat of violence and an act of terror in Colleyville for the media to cover antisemitism."

"One (reason) is the rise of white supremacy," Soifer said, "and the fact that we had a president for four years who aligned with, amplified and even at times echoed right wing extremist views."

The Jewish community is also the victim of antisemitic attacks from multiple sources. Extremists on the left and the right, as well as extremists acting in the name of Islam, have been responsible for hate speech and attacks, according to the AJC.

The Jewish community is faced with the reality of antisemitism every time people go to a synagogue and walk through metal detectors or other security. They have "unfortunately gotten way too used to having to have increased and enhanced security at our houses of worship," Schwitzer said.

Schwitzer's children, twins who are freshmen in college, witnessed antisemitism when someone pasted stickers around campus portraying a smiling Adolf Hitler.

Attacks contribute to a communal sense of trauma, experts say, but for Schwitzer, the hostage situation at Beth Israel was also personal. His family knows Cytron-Walker and has attended bat mitzvahs and events at the synagogue. His wife teaches Sunday school at another synagogue and had to re-plan her lesson to address the terrorism the community faced Saturday.

"You cannot help but envision yourself in that situation," Schwitzer said.

Soifer said while she was deeply relieved that all the hostages were unharmed, she was shaken. When she first saw the news Saturday, she did not realize the rabbi being held hostage was the same man she grew up with at Shaarey Zedek in East Lansing, Michigan.

"It was incredibly harrowing for the family, who was basically receiving the same information we all were via the news," she said. "So I feel unsettled. As many American Jews do today."

Other groups weigh in

Soifer and Schwitzer emphasized that while Saturday's attack targeted the Jewish community, no place of worship should ever have to fear violence. Cytron-Walker is nationally known for his dedication to interfaith ties between the Jewish and Muslim community.

"We all, no matter what religion we practice, deserve to feel safe in our chosen house of worship," Schwitzer said. "It is important to see members of diverse communities come together to condemn this act, as we have seen."

Groups across the country denounced the attack Saturday while raising alarm at the rise in this form of hate. The Anti-Defamation League is calling on Congress to double its funding for a Federal Emergency Management Agency grant program that helps provide security.

"This situation is a painful reminder of the fact that synagogues in America continue to be at risk for terrorist attacks as we witness historically high levels of antisemitism across the country and the proliferation of anti-Jewish hate online," the Anti-Defamation League said. "We urge continued vigilance in securing synagogues and all Jewish institutions in the wake of this attack."

The Colleyville hostage-taker referred to Siddiqui as his sister as he made apparent demands with FBI negotiators. John Floyd, the chair of the Council on American-Islamic Relations Houston board, said the group "strongly condemns" what happened at Congregation Beth Israel. Floyd also is legal counsel for Siddiqui's real brother and said he had nothing to do with the attack.

"This antisemitic attack against a house of worship is unacceptable," Floyd said in a statement. "We stand in solidarity with the Jewish community, and we pray that law enforcement authorities are able to swiftly free the hostages and bring them to safety."

He added Siddiqui's family "has always stood firm in advocating for the release of their sister from incarceration by legal and non-violent means only. "