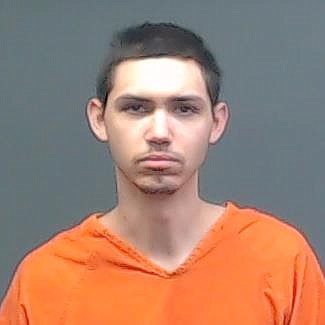 NEW BOSTON, Texas -- A jury seated to decide if a Texarkana man is guilty of capital murder heard testimony Tuesday from a woman who spoke with the accused minutes before he was involved in a head-on collision that took the lives of two young boys.

Zachary Blaise Salazar, 22, is accused of intentionally crashing his pickup into a minivan shortly before 10 p.m. Jan. 13, 2021, on Highway 82 in DeKalb, Texas. Riley Burgess, 7, and James Crowley, 3, were pronounced dead at the scene. Both were restrained in car seats.

The mother of a woman Salazar had been dating for about two months testified that Salazar had just left her home on Knapp Street in DeKalb when she heard the sound of sirens.

Leal said her daughter and Salazar had been exchanging text and social media messages throughout the day. Her daughter had just learned she was pregnant with Salazar's child and Salazar was allegedly upset because his girlfriend didn't want to leave her mother's home in DeKalb and move in with him in Texarkana.

"She let me read through all the messages. I told her that's not the kind of person I wanted her with. There were too many red flags," Leal said.

Leal testified that some of the messages she read from Salazar threatened that he would harm himself or someone else. Leal said Salazar showed up at her house about 45 minutes after her daughter blocked him from communicating with her electronically.

"He was aggravated, agitated, raising his voice. He was cussing," Leal testified under questioning by First Assistant District Attorney Kelley Crisp. "I told him to leave."

Leal said Salazar's last words as he left her property included the threat to wreck his truck.

Texarkana defense lawyer Jeff Harrelson asked Leal if she was sure about what Salazar said, "You don't think he really said, 'You're a f------ b----?'"

Within minutes, Leal and her daughter heard the sound of sirens coming from the nearby highway.

Leal said she and her daughter made their way to the crash site.

DeKalb Volunteer Fire Department Chief Ronnie Barrett, who previously retired as chief of the fire department at Red River Army Depot, said both boys were strapped into their car seats when the minivan was struck.

When asked by Assistant District Attorney Lauren Richards about the condition of the minivan, Barrett was clear.

"It was probably one of the worst I've seen in my 24 years of firefighting," Barrett said.

Barrett said there were seven people in the van, three adults and four children. Barrett described telling the mother of the boys that her sons were dead.

"She let out one of them screams that you can only imagine," Barrett said, a slight crack in his voice. "She was on her hands and knees in the parking lot."

As Barrett and other fire personnel testified, the jury was shown photos of the mangled minivan. Barrett said the family was driving home from a trip to Walmart.

"There were a lot of groceries, they were buying for a lot of days," Barrett said.

Barrett said he quickly acted to cover the bodies of the two boys with sheets so they would not be visible to curious onlookers. In photos shown to the jury, fabric covered portions in the back of the twisted minivan.

"The impact knocked the middle seat into the back," Barrett testified.

Barrett said that after learning the crash might not have been accidental, he told firefighters to treat the area as a crime scene.

DeKalb Fire Department Captain Ben Hutson testified that he was was approached by Leal and her daughter at the accident scene and given information that caused him concern. Hutson said he notified Barrett who then took the women to a Department of Public Safety trooper so their statements could be taken.

Michael Sherrer, a volunteer DeKalb firefighter, said he checked both James and Riley immediately upon his arrival but neither boy had a pulse.

Sherrer said pieces of the minivan and debris from the crash covered the road.

"The driver was pinned, complaining of leg pain. He said he couldn't feel his legs," Sherrer said.

Sherrer said that after using special equipment to free the driver, he was told his assistance was needed in the ambulance where Salazar was treated before being airlifted by helicopter to a hospital.

"He was being very combative," Sherrer testified.

Sherrer said Salazar was removing and pulling out medical devices and equipment and that the emergency medical workers eventually had to restrain Salazar. Under cross-examination, Harrelson asked Sherrer if he was able to determine if Salazar had a head injury, noting that Salazar had been ejected from the truck during the crash.

The jury was placed in an evening recess Tuesday afternoon by 202nd District Judge John Tidwell with instructions to return to the Bowie County courthouse Wednesday morning.

Salazar is being tried this week for two counts of capital murder. Because the state is not seeking the death penalty, he faces life without the possibility of parole, if convicted. Four counts of aggravated assault with a deadly weapon related to injuries allegedly suffered by crash survivors remain pending and will not be considered by the jury this week.

Salazar is currently being held in the Bowie County jail. Bail is set at $5.4 million.