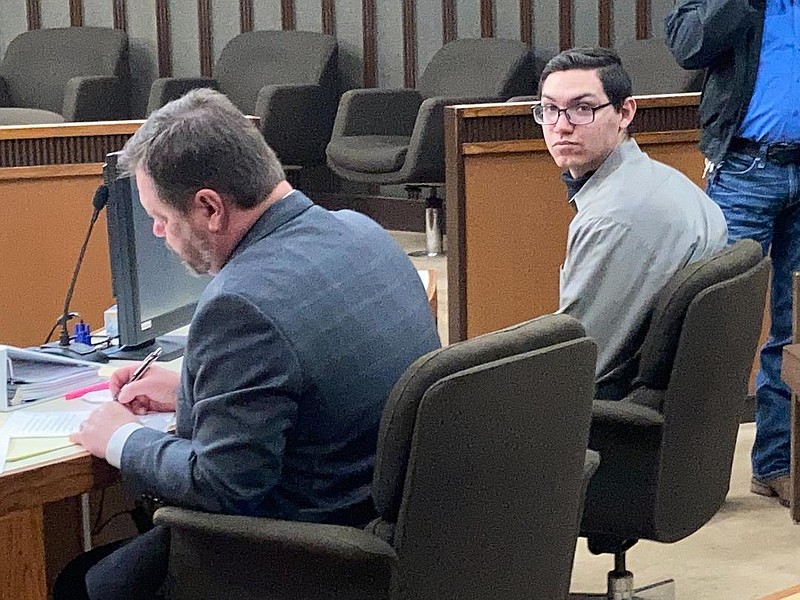 Zachary Salazar, right, sits at the defense table with his lawyer, Jeff Harrelson, shortly before the jury returned to the courtroom to hear closing arguments in his capital murder trial. Salazar was sentenced by 202nd District Judge John Tidwell to life without parole after the Bowie County jury found him guilty of two counts of capital murder in the deaths of James Crowley, 3, and Riley Burgess, 7. (Staff photo by Lynn LaRowe)

NEW BOSTON, Texas -- A Texarkana man who killed two young boys last year when he intentionally crashed his pickup into their family's minivan was sentenced Friday to life without parole after being found guilty of two counts of capital murder by a Bowie County jury.

Zachary Blaise Salazar, 22, said, "F---- it. I'll just go wreck," as he left a house on Knapp Street in DeKalb, Texas, where a woman who'd just broken up with him lived with her family. Earlier that day, Salazar posted a threat to kill himself or someone else on Facebook and in October 2020, he sent an Instagram message which stated, "I've almost intentionally gotten into multiple wrecks. I can't tell you how many times I've been going 80-plus and damn near went into the opposing lane just to get this shit done and over with and die."

Joann Ranier testified that her son, James Ranier, was driving the group home from a big grocery trip and that 7-year-old Riley was asking the meaning of a Bible verse he was learning for church as he nibbled on some chicken nuggets he'd talked his stepfather into stopping for on the drive home.

Joann Ranier was in the passenger seat. Behind the driver, buckled into his car seat, was 3-year-old little James and behind him on the driver's side was 7-year-old Riley. The children's mother, Ashly Ranier, who was about nine weeks pregnant, sat in the second row next to the couple's infant daughter, who was strapped into a rear-facing car seat in the middle.

Ashly Ranier's 5-year-old daughter was buckled into a car seat in the third row behind her mother.

James Ranier testified that he applied his brakes and attempted to move over to the shoulder when the lights of a vehicle in the eastbound lane began coming toward him. The pickup smashed into the minivan, hitting the right side where little James was.

A crash witness testified that it appeared the right side of the minivan had been peeled back with a can opener and that it was clear little James and Riley were dead.

The 5-year-old required surgery to repair her broken leg as well. Officers who interviewed the family at their home the day after the crash said the 5-year-old spoke of holding onto her brother Riley as he died.

Medical examiners testified that little James and Riley were struck with such force that they suffered catastrophic brain and spinal injuries, despite being properly restrained.

Ashly Ranier learned later that week that she lost the baby she was carrying at the time of the crash.

Robbie Barrett, a veteran firefighter, testified that the crash was among the worst he'd ever seen in his nearly 25-year career. Experienced firefighters and other first responders struggled with their own emotions as the broken bodies of little James and Riley were recovered from the mangled minivan.

The speed limit was 45 and there was no physical evidence that Salazar attempted to brake or take evasive maneuvers.

Salazar was the only witness to testify for the defense Friday. Under direct examination by Texarkana defense lawyer Jeff Harrelson, Salazar theorized that he'd had a seizure, blacked out or that his truck experienced mechanical problems.

Under cross-examniation by Crisp, Salazar claimed that he only expressed his desire to "slap" the prosecutor on recorded jail phone calls because she was disrespectful. He explained that vulgar language he used to describe his former girlfriend who informed law enforcement about his threats to wreck was justified because she is a "liar and you don't know her."

When asked if he is a violent person, Salazar said, "Angry, not violent."

Crisp asked Salazar if he threatened a high school girlfriend by walking in front of her home repeatedly after their break-up.

"That was my walking route," Salazar testified.

On rebuttal, Richards called the mother of a now 22-year-old woman.

"He stalked her, he'd call her name in the halls while she was in class. One day he grabbed my daughter by her backpack and held her down," Susan Bledsoe testified. "He would walk by my house with that airsoft gun dressed all in black, staring at her window. He'd be gone by the time the police got there."

"That should chill you to the core," Richards said.

Richards described Salazar as having no remorse for the grief and pain he has caused.

"You know who has been crying for those children for the past year," Richards continued by listing the names of the Ranier family.

Crisp described Salazar as a man who cannot control himself and who attempts to manipulate others with threats, taunts and false claims of a seizure disorder.

The jury returned with a guilty verdict after about 45 minutes.

After the jury was removed from the courtroom, Tidwell formally sentenced Salazar to an automatic sentence of life without parole. The state did not seek the death penalty.

Crisp said that while she is glad to see justice served, she cannot forget the lost lives of two innocent boys, one who was asking for a blue cake for his fourth birthday and one who wanted to understand a Bible verse and eat chicken nuggets, in the hour before their untimely deaths.

"While the Bowie County District Attorney's Office is thankful for the jury's verdict and the result in this case, we remain saddened by the loss of life this defendant's actions caused," Crisp said. "Our consolation is that Salazar will never again have the opportunity to harm our citizens, and that our community, through our system of justice, places the highest value possible on the precious gifts of life and children." 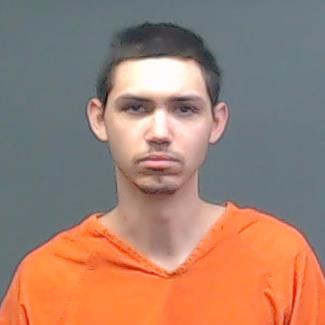 Print Headline: Salazar sentenced to life without parole after jury finds him guilty of capital murder in the deaths of two boys