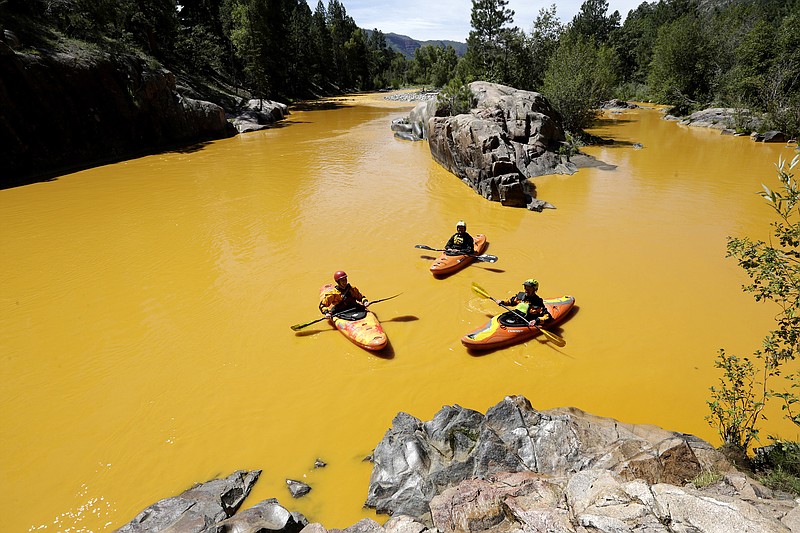 FILE - People kayak in water colored from a mine waste spill at the Animas River near Durango, Colo., on Aug. 6, 2015. Colorado, the U.S. government and a gold mining company have agreed to resolve a longstanding dispute over who&#x2019;s responsible for cleanup at a Superfund site that was established after a massive 2015 spill of hazardous mine waste. The proposed settlement announced Friday, Jan. 21, 2022, would direct $90 million to cleanup at the Bonita Peak Mining District Superfund site, according to the U.S. Environmental Protection Agency and Denver-based Sunnyside Gold Corp (Jerry McBride/The Durango Herald via AP, File)

DENVER -- Colorado, the U.S. government and a gold mining company have agreed to resolve a long-standing dispute over who's responsible for continuing cleanup at a Superfund site that was established after a massive 2015 spill of hazardous mine waste that fouled rivers with a sickly yellow sheen in three states and the Navajo Nation.

The proposed settlement announced Friday would direct $90 million to cleanup at the Bonita Peak Mining District Superfund site in southwest Colorado, according to the U.S. Environmental Protection Agency and Denver-based Sunnyside Gold Corp.

The agreement must be approved by a federal judge after a 30-day public comment period.

An EPA-led contractor crew was doing excavation work at the entrance to the Gold King Mine, another site in the district not owned by Sunnyside, in August 2015 when it inadvertently breached a debris pile that was holding back wastewater inside the mine.

Sunnyside operated a mine next to Gold King that closed in 1991. A federal investigation found that bulkheads to plug that closed mine led to a buildup of water inside Gold King containing heavy metals. The EPA contractor triggered the spill while attempting to mitigate the buildup.

Under the agreement, Sunnyside and its parent, Canada-based Kinross Gold Corp., will pay $45 million to the U.S. government and Colorado for future cleanup. The U.S. will contribute another $45 million to cleanup in the district, which includes the Gold King Mine and abandoned mines near Silverton.

Monies will be used for water and soil sampling and to build more waste repositories. The EPA said in a statement Friday it has spent more than $75 million on cleanup work "and expects to continue significant work at the site in the coming years."

Sunnyside admitted no fault in the new agreement. The company said it has spent more than $40 million over 30 years cleaning up its property in the Superfund district.

The proposed consent decree follows Sunnyside settlements with New Mexico and the Navajo Nation last year. In December, Sunnyside said it had agreed to pay Colorado $1.6 million to resolve its liability for natural resource damage related to the Gold King Mine spill.

"The Gold King spill is a vivid reminder of the dangers associated with the thousands of abandoned and unclaimed hard rock mines across the United States, particularly in the West," Tommy Beaudreau, deputy secretary of the Interior Department, said in a prepared statement.

The statement added: "Mining companies should be held accountable for these sites that put communities and tribal lands at risk of disastrous pollution."

Sunnyside said Friday's agreement "recognizes the federal government's responsibility for its role in causing environmental contamination" within the Superfund site, according to a statement from Gina Myers, the company's director of reclamation operations.