Coalition led by Texarkana businessman lobbies for more I-49 funding 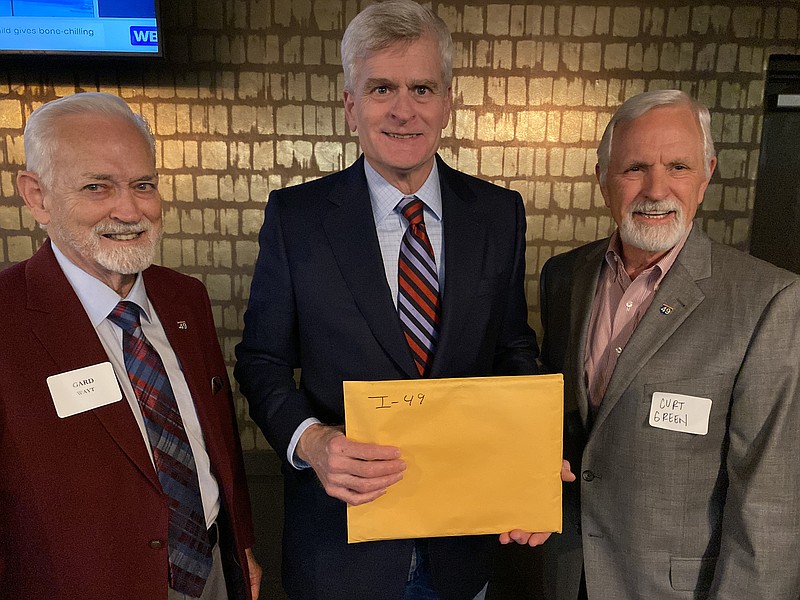 TEXARKANA -- Leadership of a group that works to secure funding to compete Interstate 49 met recently with a U.S. Senator in Louisiana to discuss strategy.

Green is a Texarkana businessman and developer who has long championed I-49.

The main topic of discussion was potential funding from the recently-passed federal Infrastructure Investment and Jobs Act to finish I-49 in Louisiana and Arkansas.

The biggest remaining gap in I-49 is a 139 mile stretch between Texarkana and Fort Smith, Arkansas. It has been dubbed "The Missing Link," by officials and proponents who want to complete the route.

Another 13-mile segment, between Barling and Alma, Arkansas, is scheduled for completion beginning this fall, and will finish the connection from Fort Smith north to Canada by way of I-49 and I-29 -- and to Duluth, Minnesota and the Great Lakes by way of I-49 and I-35.

The completion of these remaining segments in Arkansas and Louisiana, totaling 221 miles, will create a 1,700-mile International Trade Corridor from Canada through the heart of America to New Orleans and the other Gulf Coast ports -- and to Central/South America and points worldwide through the expanded Panama Canal.

Along the way, this North-South Interstate corridor will intersect nine existing East-West Interstates, creating a comprehensive transportation grid that will enhance movement of food, goods, energy and people to and from anywhere in Mid-America and the rest of the world.

Cassidy received an I-49 Information package showing the significant improvements in transportation that will result nationally when I-49 is finished. (The 1,700-mile "Mid-America Connector" is currently 87% complete.)

Cassidy stated his belief that the completion of I-49 will be a major economic boost to North Louisiana, Western Arkansas and all of Mid-America. The I-49 International Coalition will continue to work with Senator Cassidy, his staff and his Congressional colleagues to promote funding to finish I-49.

The I-49 Coalition includes cities, counties, Chambers of Commerce, associations, businesses and individuals throughout Mid-America. They work with federal, state and local officials toward the earliest possible completion of I-49.