Graduation rates dip across US as pandemic stalls progress 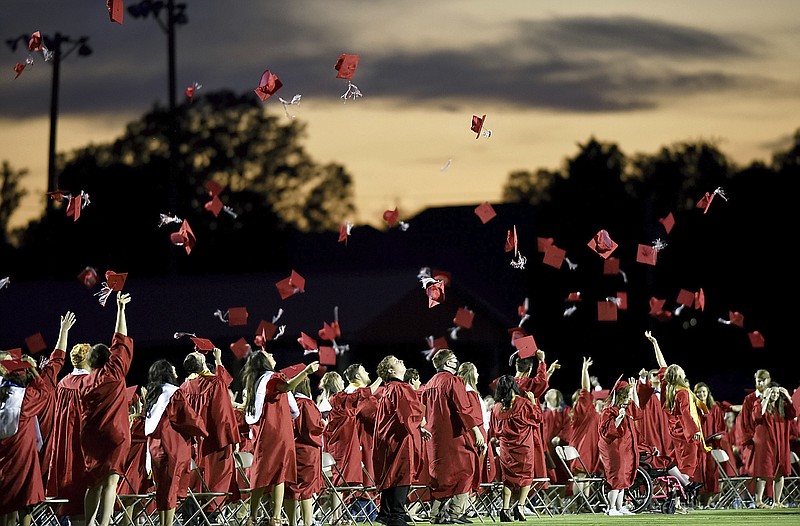 High school graduation rates dipped in at least 20 states after the first full school year disrupted by the pandemic, suggesting the coronavirus may have ended nearly two decades of nationwide progress toward getting more students diplomas, an analysis shows.

The drops came despite at least some states and educators loosening standards to help struggling students.

The results, according to data obtained from 26 states and analyzed by Chalkbeat, are the latest concerning trend in American education, which has been rocked by a pandemic that left many students learning remotely last year and continues to complicate teaching and learning. Some fear that the next several graduating classes could be even more affected.

"It does concern me," said Chris Reykdal, the schools superintendent in Washington state, where the graduation rate fell by about half a point. "I don't ever want to see a decline. We've made such steady progress."

In 2020, when schools shuttered for the final months of the school year, most states waived outstanding graduation requirements and saw graduation rates tick up. But the picture was different for the class of 2021. In 20 of 26 states that have released their data, graduation rates fell. Comprehensive national data will likely not be available until 2023.

Those declines were less than a percentage point in some states, like Colorado, Georgia and Kansas. Elsewhere, they were larger. Illinois, Oregon, and North Dakota saw graduation rates drop 2 points, and Indiana, Maine, Nevada, South Dakota, and West Virginia saw declines of at least 1 point.

Where rates increased, growth was modest. Florida had seen graduation rates jump by more than 2 points every year for a decade but gained just a tenth of a point in 2021, even as state officials waived certain diploma requirements.

"We do have to be concerned that grad rates are down and that some number of kids that earned a diploma, they've learned less than prior years," said Robert Balfanz, a professor at the Johns Hopkins School of Education and director of a research center focused on high school graduation. "What we're going to have to learn in the future is, how great is the concern?"

Carly Lott, a counselor at Hug High School in Reno, grew concerned last year as the hours on her students' pay stubs, which the school collects to offer elective credits, rose from 20 to 30 a week to 40 to 50. Some students worked during remote school days, while others took late-night shifts that left them too tired to concentrate on schoolwork.

Lott made sure students knew about the district's food bank and grew used to asking, "Do you absolutely need to work, or can you cut back?" As course failures stacked up, a trend schools reported nationwide, counselors nudged seniors to come to school in person to make up missed credits.

"If they were at home, they weren't engaged -- they were doing other things," Lott said.

One of last year's graduates, 19-year-old De'karius Graham, had an up-close view of how 12th graders struggled.

There was no prom to look forward to, and all his senior classes at Florida's Polk County schools were online, an experience he describes as "​​low social interaction, low teacher interaction." He often turned to YouTube to figure out confusing assignments.

"It was a lot of self-teaching and self-motivation," he said. "I was just really alone with it all."

At the same time, Graham was running his own landscaping business to make money and helping seven school-age siblings with their homework. He also spent time working with a close friend who struggled with online assignments without reliable internet.

Other students got derailed. Eighteen-year-old Lailani Greaves had been behind before the pandemic but was aiming to graduate with the class of 2021. Without in-person connections, her motivation plummeted.

"I didn't have a clear head where I was focused and able to go every day and catch up on some work and log in to the computer," she said. "Just talking to a computer -- it didn't feel real."

The New York City student contemplated dropping out and getting her GED but ultimately transferred to a smaller high school and is hopeful she'll graduate this year.

"I realized that I could go farther with my high school diploma," said Greaves, who wants to pursue a career in medicine.

Despite those challenges, statewide graduation rates are still typically higher now than they were a few years ago. But the modest declines are striking departures from recent trends.

In 2001, an estimated 71% of U.S. students who started ninth grade at a public high school graduated four years later. By 2019, that number had jumped to 86%, although the nation's way of calculating that has changed slightly.

On its face, that increase is one of the biggest recent success stories in American education. A recent Brookings Institution study concluded that the gains were a result of new federal pressure on states and schools and found little evidence that the long-term improvements were due to lower standards.

The causes are much debated, though. A 2015 NPR investigation found that many students graduated with the help of hasty, low-quality credit recovery courses. Some of the states with the nation's top graduation rates, like Alabama and West Virginia, also have very low test scores.

Some fear that cumulative effects of the pandemic stand to hit future graduating classes hardest. In both Oregon and Nevada, the share of high school freshmen who finished last school year on track to graduate was about 10 percentage points lower than before the pandemic. This school year, attendance has also been unusually low.

Lott worries many seniors won't graduate on time this year, either.

"​We have a significant group of kids on our campus who failed an entire year of high school," she said. Those students get extra check-ins with Lott, who says it will be hard but not impossible to make up those classes through online credit recovery.

"I tell them, there will be a time that you're going to want to give up," she said. "That's when we need to talk with you, because we can help you through that motivational slump."

Schools have received large sums of federal aid that could be used to help students to graduate, but Washington's Reykdal said schools have recently been focused on staffing and safety.

"If I had talked to my districts a year ago, they all would have said graduation and recovery, and right now they're saying more PPE, finding substitutes," he said.

Every week, a team of educators identifies students with failing grades for extra support. The district has also added ways for working students to earn credits in the evenings or on weekends, and has hired three "navigators" to help students who are in the juvenile justice system to finish school.

"It is not easy," Desmoulin-Kherat said. "It's definitely a marathon, not a sprint."

Chalkbeat's Sarah Darville and Christina Veiga contributed to this report. 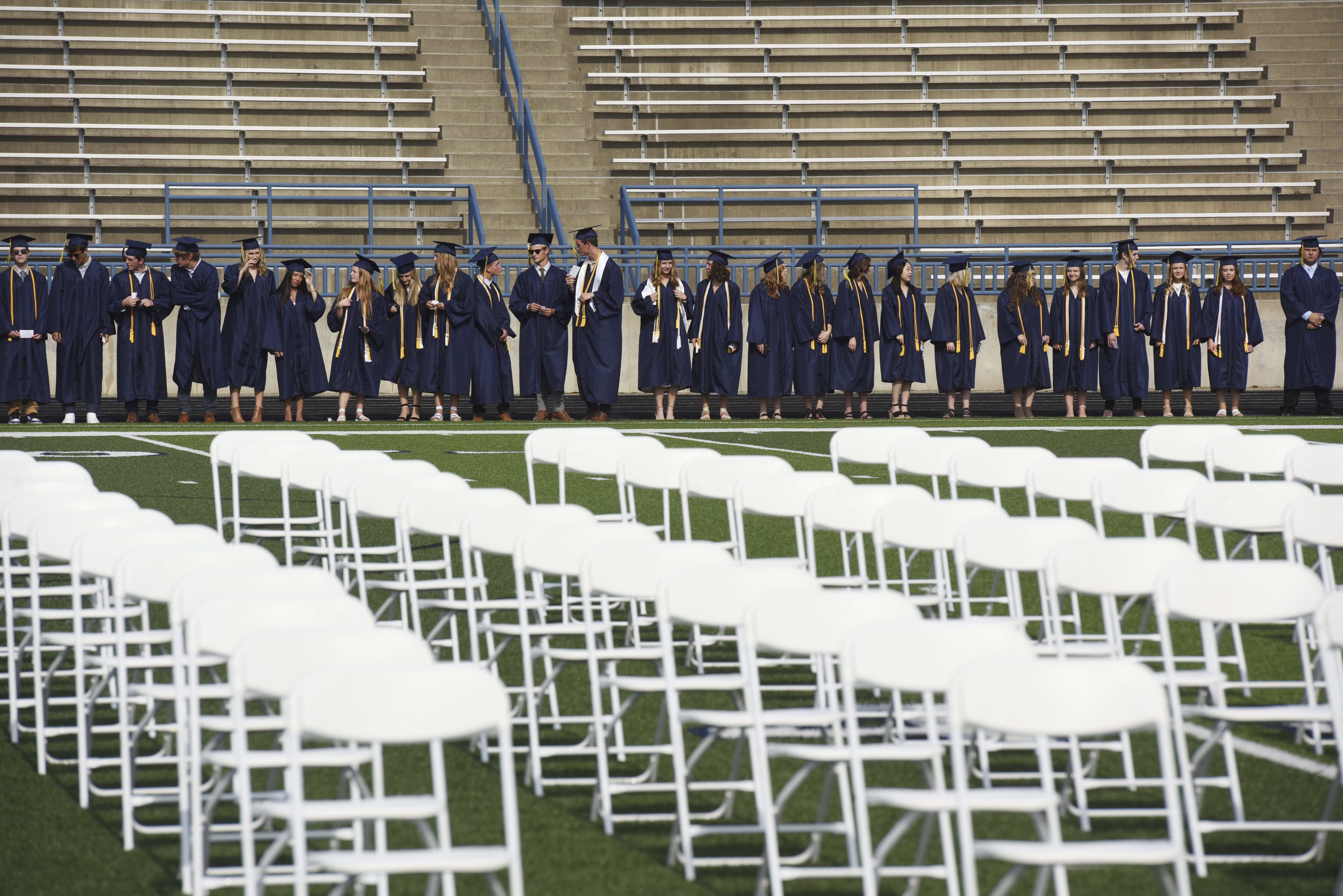 FILE - Graduates wait for the start of the St. Joseph High School Class of 2021 commencement ceremony, Sunday, June 6, 2021, in St. Joseph, Mich. High school graduation rates dipped in at least 20 states after the first full school year disrupted by the pandemic, according to a new analysis by Chalkbeat. (Don Campbell/The Herald-Palladium via AP, File) 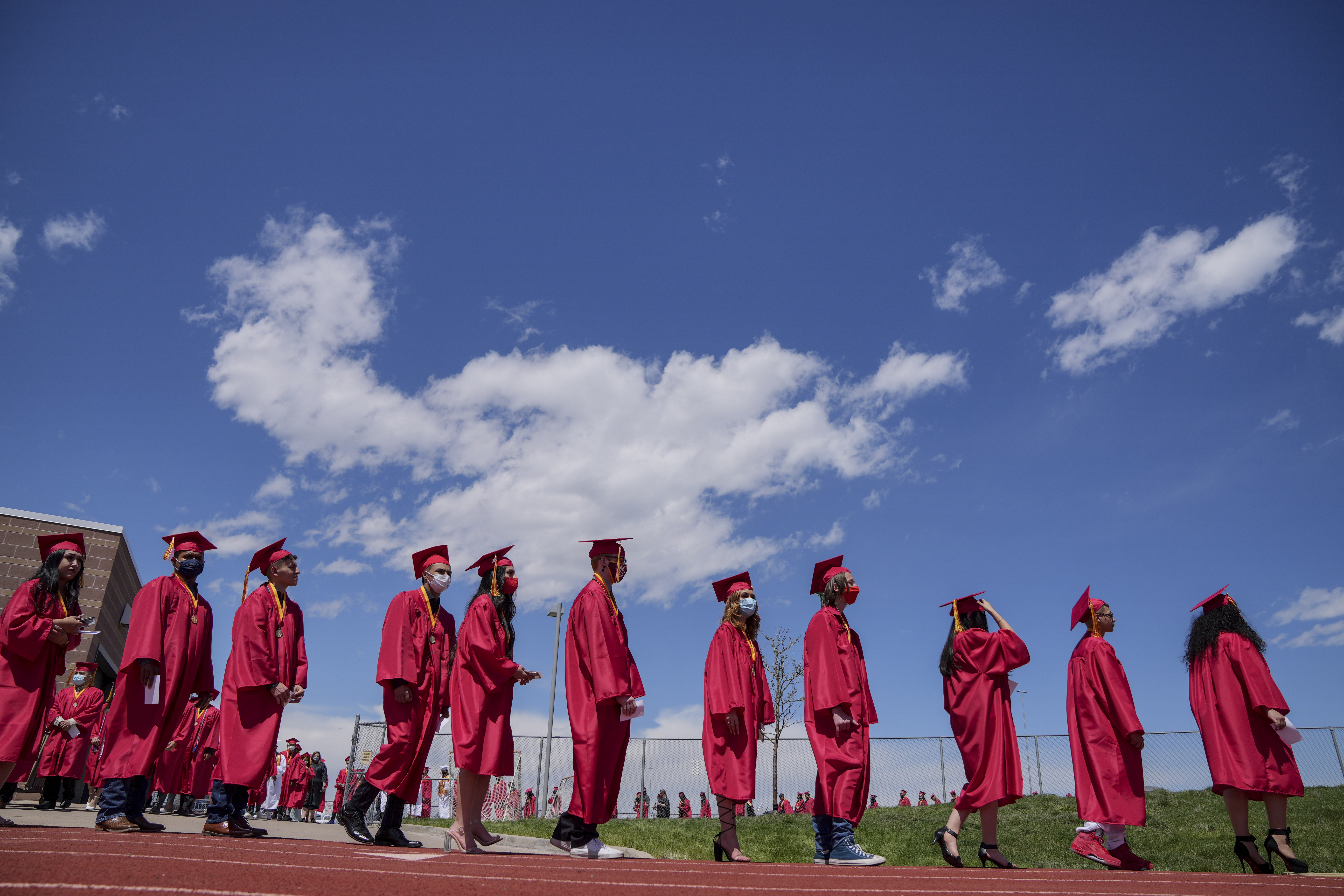 Graduates arrive during the Northglenn High School graduation ceremony at North Stadium on Thursday, May 13, 2021 in Westminster, Colo. High school graduation rates dipped in at least 20 states after the first full school year disrupted by the pandemic, according to a new analysis by Chalkbeat. That suggests the pandemic has halted nearly two decades of nationwide progress toward getting more students high school diplomas. Even more worrying: the drops came despite at least some states and educators loosening standards to help struggling students. (AAron Ontiveroz/The Denver Post via AP) 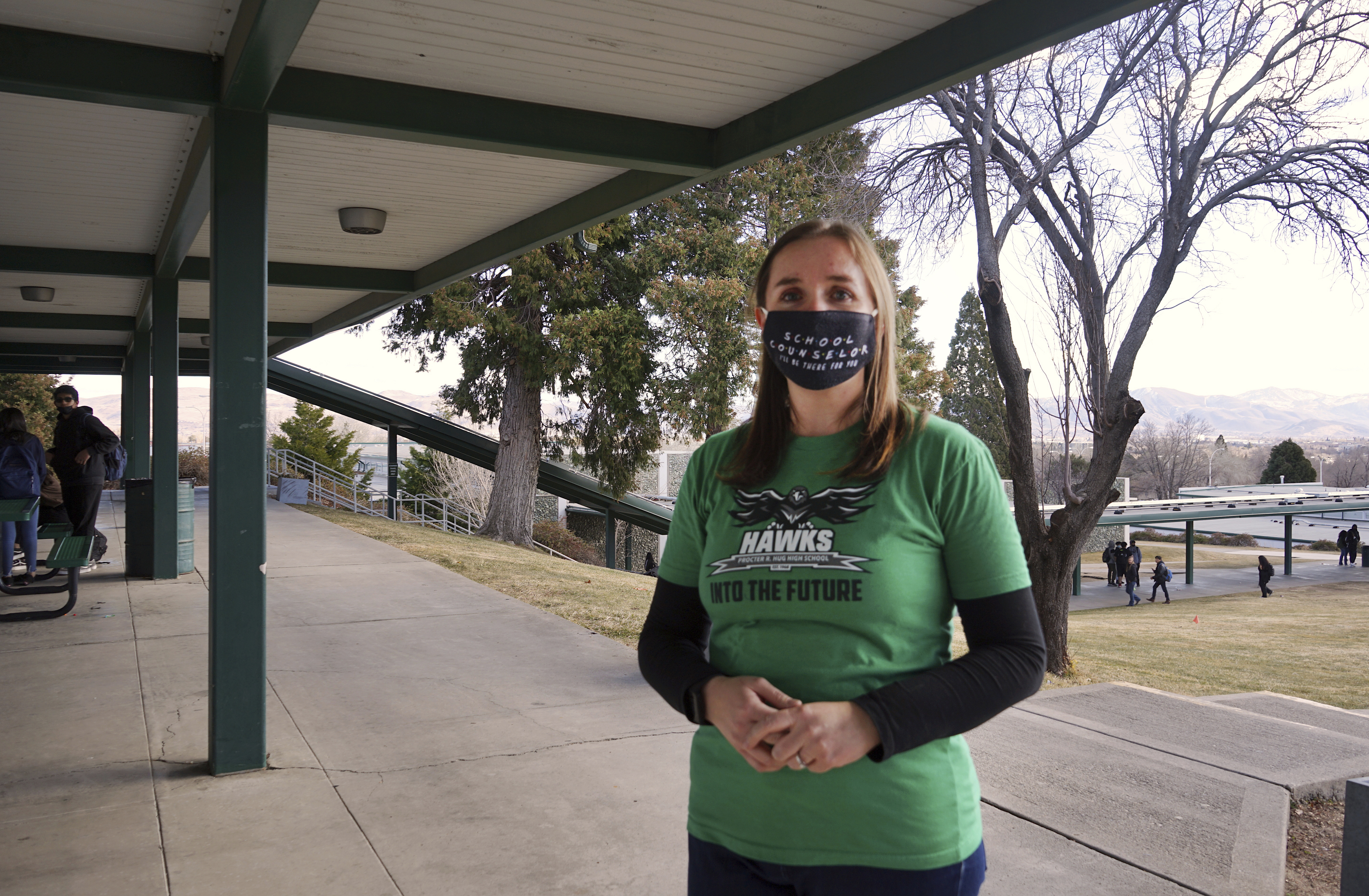 Counselor Carly Lott stands outside her office at Procter R. Hug High School in Reno, Nev., Friday, Jan. 21, 2022. Lott became concerned about the hours students were working outside the classroom early in the pandemic and its potential effect on graduation rates, which are dipping in many states for the first time in decades. (AP Photo/Samuel Metz)