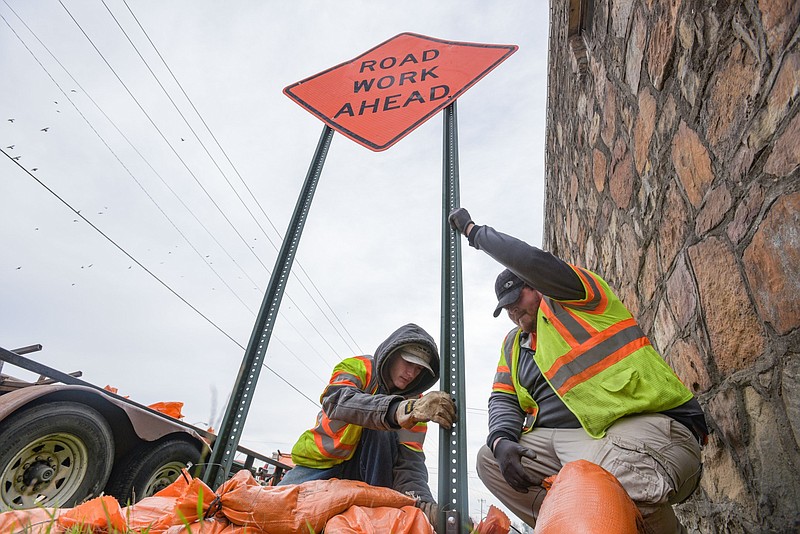 Zachary Hutchison (left) and Mykel Bridges, workers for Time Striping, break down a caution sign along Wheeler Avenue and Highway 255 in Fort Smith in this Dec. 20, 2021, file photo. Hutchison and Bridges said they had many more road work signs to remove after the Arkansas Department of Transportation recently completed a pavement preservation project for the 6-mile stretch of road. (NWA Democrat-Gazette/Hank Layton)

In the wake of recent work zone deaths of two Arkansas Department of Transportation workers, the agency plans to roll out a safety and enforcement campaign starting Feb. 2 centered on reducing road work zone crashes, according to a news release from the department Friday.

The initiative will continue to stress safety at work sites while asking drivers to do their part to prevent the injuries and deaths of road workers. The effort will be paired with increased work-zone law enforcement conducted by the Arkansas State Police and the Highway Police. The Highway Police is the law enforcement arm of the state transportation department.

"We are deeply saddened and concerned by the alarming rise in work zone crashes, injuries and deaths in Arkansas -- especially the two most recent deaths in the past month," said Robert Moore, chairman of the Arkansas Highway Commission. "Our hearts go out to the families whose loved ones went to work one day and never made it home."

Cottier was working in the right travel lane about 1:45 a.m. when he was hit by a vehicle that had already struck a parked truck, sending Cottier into a third vehicle, according to a state police report.

The deaths of Petty and Cottier are part of a dangerous trend, Arkansas Department of Transportation spokesman Dave Parker said, with the agency finding that work zone crashes jumped 70% in the past four years.

The number of fatalities decreased from 2020 to 2021 -- from 19 to 16, respectively -- but the the deaths led state transportation department officials to begin working on a safety initiative last fall, before the two most recent deaths, Parker said.

Most of these crashes are caused by people following other vehicles too closely and not leaving room to safely stop or slow down; speeding; and distracted driving, Parker said.

"We are urging Arkansans to do their part: slow down in work zones, stay off the phone and pay attention," transportation department Director Lorie Tudor said in the release. "It's going to take all of us working together to reverse this concerning trend."

Sadler also pointed to speeding and distracted driving as main causes of the crashes, saying they reflect a wider trend of reckless driving at high speeds on the state's roads over the past few years.

"The people who are driving at these high rates of speed before entering a construction zone don't always slow down," Sadler said.

In the case of the driver who hit and killed Petty, Sadler said police on Thursday were nearing a "significant breakthrough" in the effort to identify the vehicle, but it will take time to see if that will lead quickly to an arrest.

In Arkansas, all traffic violation fines in work zones are automatically doubled, but Parker said the need to slow down and take care is about more than the financial penalty.

"It's someone's life at stake," he said.

"It's not just the ArDOT worker out there," Parker wrote in an email. "The pavement folks, asphalt, contractors, they all have a stake in this."

In addition to the emphasis on enforcement, the state department of transportation will be reviewing the recent incidents to ensure that all department safety policy was properly followed, the news release stated.