The best breakfast tacos are the ones made at home 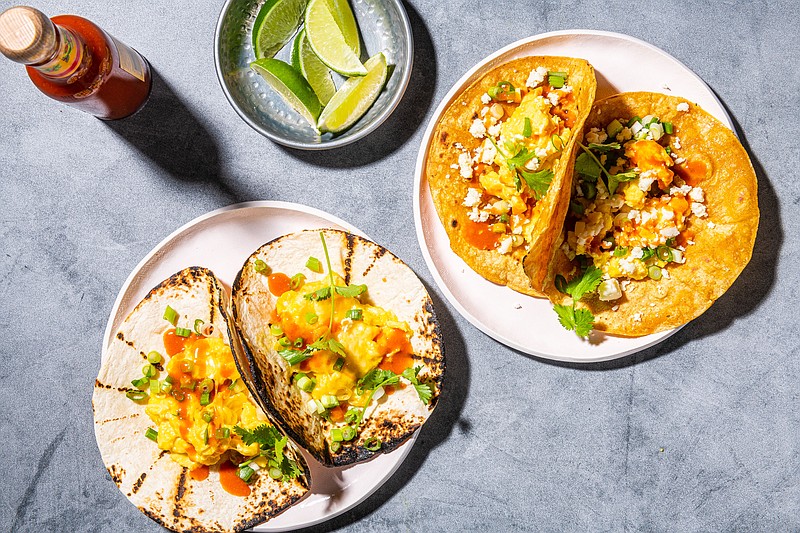 Breakfast Tacos. MUST CREDIT: Photo by Rey Lopez for The Washington Post.

When I mentioned to my editor, Joe Yonan, that I was going to write about breakfast tacos, his eyes started to twinkle and his lips turned up into a grand smile. He's a Texan, after all, and Texans know breakfast tacos. "OK, but have you had a migas breakfast taco?" he asked. We spent the next half-hour talking about migas and chilaquiles, whether a breakfast taco needs eggs to be considered a breakfast taco - more on that in a minute! - and some of his favorite spots to get breakfast tacos in Texas. The conversation ended with us debating the merits of corn vs. flour tortillas as a breakfast taco conduit.

José R. Ralat, author of "American Tacos" and the taco editor at Texas Monthly, regularly writes about breakfast tacos. He has tried to untangle the debate between bacon strips and bits, opined on the brilliance of weenies and eggs, and considered the beauty of a well-made flour tortilla.

"A great breakfast taco is about choice, and Texans have a bounty of choice in regionally distinct options," Ralat told me, noting that a breakfast taco doesn't need to contain eggs to be a taco you eat for breakfast. "Traditionally, it begins with a flour tortilla, though corn's OK, too. They vary in size and thickness, from the nearly translucent, platter-size flour tortillas of Brownsville to the smaller, thick and dusty cushions of San Antonio."

If you walk into a diner in San Antonio or South Texas - the geographic home of breakfast tacos - the filling options are myriad. Think: the chunky beef stew that is carne guisada or barbacoa or a bone-in pork chop. Saucy chilaquiles or refried beans and brisket.

Mostly, Ralat wants non-Texans to know that breakfast tacos aren't an Austin thing. "There is no such thing as Austin-style breakfast tacos," he says. "They come from South Texas towns like Laredo, Brownsville and Corpus Christi, and thrive in all their creative glory in San Antonio. The farther north one travels in the state, the more limited the breakfast taco options."

For these breakfast tacos, you'll scramble some eggs seasoned with salt, cooked to your preferred doneness. Then, add sliced scallions, crumbled or shredded cheese, a few sprigs of cilantro and your favorite salsa. Note that this recipe uses 3 large eggs for 4 small tacos. This is a good proportion of scrambled eggs to 5-inch tortillas - don't overstuff your tacos! If you have bigger tortillas, feel free to scramble more eggs.

Then, customize it to your liking: Add some chorizo to stain the eggs rojo. Pile on diced and browned potatoes, or crispy hash browns; bacon strips or weenies; a swipe of refried beans or puddle of saucy black beans; braised meat or leftover stew; tortilla chips for migas; your favorite fresh or cooked salsa; chile oil; a flurry of herbs.

In a medium bowl, whisk the eggs with the salt until homogeneous and foamy, about 30 seconds.

To reheat corn tortillas: In a large skillet over medium heat, add about 1 teaspoon of oil. Slide one of the tortillas around to grease the skillet with the oil, then add the remaining tortillas in a single layer. It's OK if they overlap a bit. Heat the tortillas until they begin to puff or brown, about 3 minutes, then flip and heat until they develop a few light brown spots, another 3 minutes. Using tongs, remove the tortillas from the skillet. Or you may steam them in a barely damp towel in the microwave.

To reheat flour tortillas: Warm over a low open flame until speckled spots appear, or steam them in a barely damp towel in the microwave.

Increase the heat to high and add the remaining oil to the skillet. When it shimmers, turn off the heat. Carefully add the whisked eggs and, using a rubber spatula, stir eggs so they form large, fluffy curds - or cook the eggs until they are as done as you like.

Divide the scrambled eggs among the tortillas. Top with the scallions, cheese, if using, cilantro and chile oil or hot sauce, and serve, with lime wedges for squeezing.

This analysis is an estimate based on available ingredients and this preparation. It should not substitute for a dietitian's or nutritionist's advice

Print Headline: The best breakfast tacos are the ones made at home