This easy buttermilk waffle recipe is fast, flexible and fun 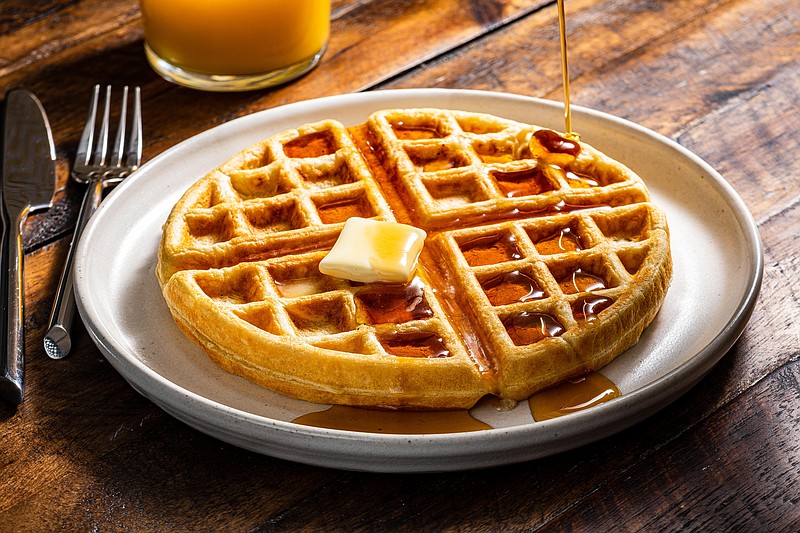 Buttermilk Waffles. MUST CREDIT: Photo by Rey Lopez for The Washington Post.

There's a lot to be said for no-fuss, back-pocket recipes you can whip up any time. They can be especially helpful come morning when we're still rubbing the sleep out of our eyes.

These Buttermilk Waffles are exactly that kind of dish. The recipe is one I've been making for well over a decade, adapted from one of the first cookbooks I ever owned, "The Williams-Sonoma Bride & Groom Cookbook," by Gayle Pirie and John Clark (a wedding present, of course).

The waffles are pantry-friendly and require only a few ingredients. The recipe is simple enough that after a few batches, you, like me, will have it memorized. In no time, you'll be churning out beautiful waffles before your caffeine has even kicked in. They're the ideal breakfast to bust out for special occasions or lazy weekends at home.

As written, this recipe creates crisp, versatile waffles that are a blank canvas for your choice of toppings, though maple syrup and a little pat of softened butter are at the top of my list. It's flexible as well.

- Try swapping in whole-grain flours, such as whole-wheat, spelt or buckwheat, for up to half of the all-purpose. Cornmeal is lovely, too.

- Use your favorite extract, and experiment with citrus zests.

- Take the waffles in a savory direction with spices, diced chipotle peppers or sliced scallions.

- Top with a fried or sunny-side up egg and some hot sauce? Don't mind if I do.

- For extra lightness and crispness, check out the variation at the bottom of the recipe that uses whipped egg whites.

Buttermilk is worth keeping on hand for this recipe alone, and as I've said here before, I don't think substitutes cut it. Leftover buttermilk can be frozen, but it will also keep for months in the refrigerator.

For several reasons, I have two waffle irons - one that produces a pair of square waffles and another that creates Belgian-style rounds. This recipe worked well in both models. How many waffles you end up with may vary depending on your individual appliance.

Feel free to double the recipe to feed a large family or ensure you have extras for subsequent days. Perhaps even better than your first waffle warm out of the iron is being able to pop another in the toaster to enjoy that same feeling again and again.

Buttermilk waffles are a morning treat, and these can be whipped up at a moment's notice on a special or ordinary day.

Your waffle yield may vary depending on your appliance. We tested the recipe in both round and square waffle irons.

Storage Notes: The finished waffles can be refrigerated in an airtight container for up to 2 days or frozen for up to 1 month and reheated in a toaster or toaster oven.

4 tablespoons (1/2 stick/57 grams) unsalted butter, melted and cooled (may substitute some or all neutral oil), plus more for optional topping

Preheat the oven to 200 degrees. Have a large, rimmed baking sheet ready.

In a large bowl, whisk together the flour, baking soda and salt until combined. In a separate medium bowl, whisk the eggs until lightly beaten. Whisk in the buttermilk, butter and vanilla, if using, until combined. Stir the egg mixture into the flour mixture until it forms a smooth, thick batter.

Brush a waffle iron with oil or spray with nonstick spray, and preheat it according to the manufacturer's directions. Ladle enough of the batter to cover three-fourths of the surface of the waffle iron - this will vary by model, but expect 1/2 to 3/4 cup (120 to 180 milliliters) of batter per waffle - close it, and cook for 3 to 5 minutes, or until the iron alerts you the waffle is done. If your iron does not have an alert, look for the waffle to be crisp and golden brown.

Repeat with the remaining batter, placing finished waffles on the baking sheet in the oven to keep warm, if desired.

Serve with maple syrup, pats of butter or other toppings passed at the table.

VARIATION: To add extra lift and crispness to your waffles, separate the eggs and use only the yolks when you whisk in the buttermilk and butter. In a separate bowl, beat the egg whites with an electric mixer on low, then medium-high speed to form soft peaks. After the flour and egg yolk mixtures have been combined, fold half of the beaten egg whites into the batter until barely blended, then fold in the remaining egg whites; use a gentle hand to keep the batter light.