49ers deal with the playoff highs and lows of Garoppolo 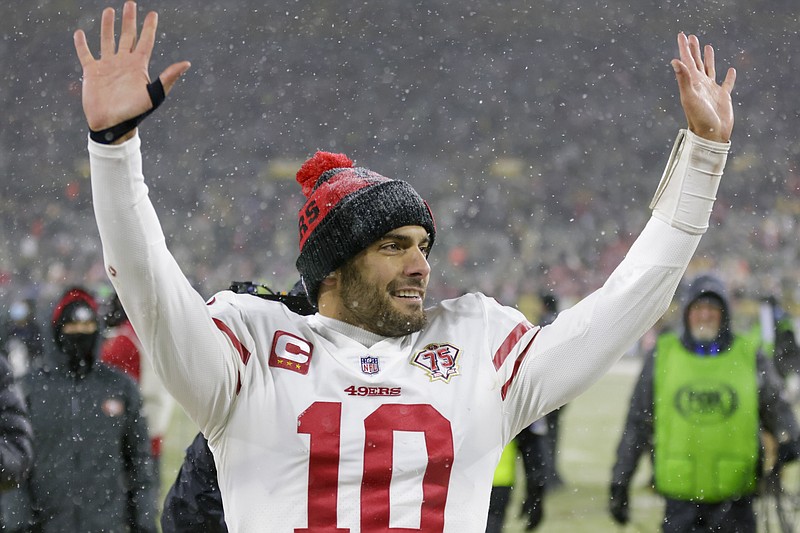 SANTA CLARA, Calif. -- Jimmy Garoppolo's playoff performance is all anyone would need to understand the decisions the San Francisco 49ers made last offseason at quarterback.

The lack of downfield throws and handful of bone-headed plays explain why the Niners felt the need to trade three first-round picks to draft Garoppolo's eventual replacement in Trey Lance third overall.

The big passes under pressure, leadership and respect from his teammates are reasons why San Francisco kept Garoppolo and his hefty contract on board out of hopes he could help the 49ers contend for a Super Bowl.

That's why Garoppolo, with all his strengths and flaws, will be under center on Sunday when the 49ers (12-7) visit the Rams (14-5) in the NFC championship game.

"We're able to maintain trust in him because we keep winning," linebacker Fred Warner said Wednesday. "Jimmy is playing great football. It's a team game. It's not just all heavily dependent upon if Jimmy does well we're going to win. He does exactly what we need him to and he comes into work every single day and is the exact same person."

Judging Garoppolo can be confounding at times as few quarterbacks have won at a better rate than he has since joining the 49ers in 2017, but scores of QBs have been more prolific, raising the question if the Niners are winning because of or in spite of Garoppolo.

Coach Kyle Shanahan's offense is efficient under Garoppolo, leading the NFL in yards per play in the regular season and ranking second in yards per attempt.

But then there are the ill-timed mistakes such as the interception that helped fuel a fourth-quarter comeback by Dallas in the wild-card round and another that thwarted one of San Francisco's few scoring opportunities in last week's win at Green Bay as Garoppolo sometimes takes chances that backfire.

"That's a fine line when you have someone who is as talented of a thrower as Jimmy," Shanahan said. "He doesn't feel the same way always in the heat of the battle, that he can't make that throw. Now when you watch it on tape and stuff, then he'll see it.

"But you're not thinking about that when you're playing a sport. You're just reacting. ... Sometimes when it doesn't go the right way, it's disappointing. But I can't tell you how many times that I don't think anyone's open and there is no play to be made and we need to make one or the game's going to be over and he finds a way to make it."

But Garoppolo also delivered in key moments, completing two passes for 26 yards on the game-winning field-goal drive against the Packers.

"I can't say enough about that guy," tight end George Kittle said. "Consistently, people try to pull him down and all he does is try to deliver. He leads his team. He's the sense of calm in the huddle."

The 49ers have won 70% of their starts with Garoppolo, including four out of five in the postseason, but his production is often underwhelming. His 146 yards passing per game in the postseason rank 80th out of 87 QBs with at least five starts in the Super Bowl era to go along with his five interceptions and two TD passes.

The Niners are the third team ever to win two playoff games in a season without getting a TD pass or run from their quarterback and San Francisco became the eighth team in the Super Bowl era to win a playoff game without an offensive touchdown last week.

Performances such as that conjure memories of the Super Bowl two years ago when Garoppolo helped stake the Niners to a 10-point lead in the fourth quarter before throwing an interception and missing an open Emmanuel Sanders on a potential go-ahead deep pass late in a 31-20 loss to the Chiefs.

Those struggles contributed to the big move for Lance last offseason after Garoppolo had a second season derailed by injuries. While Garoppolo has managed to hold onto the starting job as the Niners are patient with Lance's development, the end game has been clear to everyone.

That includes Garoppolo, who has not shied away from the reality that every game now could be his final one with the 49ers. But he's able to tune that out the same way he ignores the criticism that comes his way from pundits and social media.

"I think just knowing yourself and knowing who you are plays a big part of that, because if you get lost in it and start believing some of those things, it could take you down the wrong road," he said.

"I think it's just about knowing yourself as a player, as a person and as long as these guys in this locker room have faith in me and belief in me, that's all I really care about."

NOTES: LT Trent Williams missed practice with an ankle injury, but is expected back for the game. "In Trent's mind, there's no way he's not playing," Shanahan said. ... CB Ambry Thomas (knee) was limited. ... RB Elijah Mitchell (knee) was held out of practice, but that has been typical down the stretch. ... RB Jeff Wilson Jr. (ankle) also didn't practice after Shanahan initially said he would be limited. 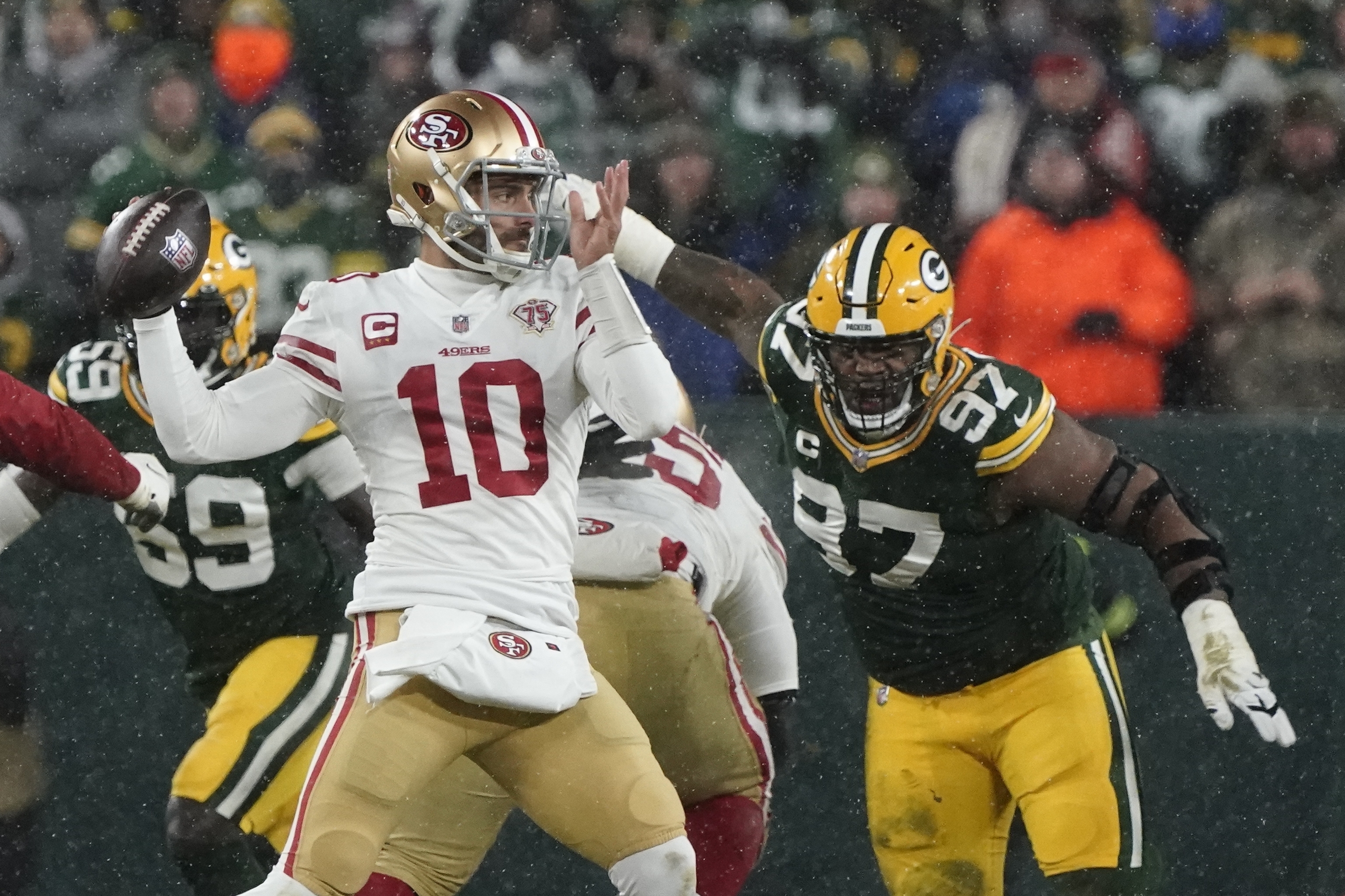 Print Headline: 49ers deal with the playoff highs and lows of Garoppolo