Even before he hit his first ball at this year's Australian Open, Rafael Nadal knew he had an open door to set the men's record for most career Grand Slam singles titles.

So far he hasn't let it close.

Nadal plays Matteo Berrettini in one semifinal on Friday at Melbourne Park, knowing he's potentially two match wins from a 21st major title. He's tied for the record of 20 with Roger Federer, who is recovering from right knee surgery, and Novak Djokovic, who was deported from Australia on the eve of the tournament following an 11-day visa saga over his decision not to be vaccinated for COVID-19.

In the other semifinal, Daniil Medvedev plays Stefanos Tsitsipas in a rematch of their 2021 Australian Open semifinal. Medvedev won last year's semifinal, then lost to Djokovic in the final.

After Nadal's tough five-set win over Denis Shapovalov on Tuesday, he looked to take away some of the pressure of that 21st major.

"I don't believe that my happiness, my future happiness is going to depend on if I achieve one more Grand Slam than the others, or if the others achieve more Grand Slams than me," Nadal said. "For me, the fact that we are equal at 20 ... the only thing that says is that we share an amazing part of the history of our sport, and for me it's a real honor to be part of it."

Nadal spoke highly of Berrettini, among the players like Tsitsipas and Shapovalov who could replace the Big Three who have dominated the sport for nearly 20 years.

"Matteo, he's one of the best players of the world," Nadal said. "I need to play my 100% and my highest level if I want to keep having chances to fight, to be competitive, and to try to be in the final."

The pair have only played once -- Nadal beat the Italian in the semifinals of the 2019 U.S. Open in straight sets. Berrettini has matured since, having lost the Wimbledon final last year to Djokovic in four sets. Nadal gives a decade in age to Berrettini -- 35 to 25.

U.S. Open champion Medvedev will have to overcome the fatigue from a late-night, 4 hour, 42-minute, five-set comeback win over Felix Auger-Aliassime on Wednesday.

Djokovic was firmly on Medvedev's mind during his escape over Auger-Aliassime, who won the first two sets and had a match point in the fourth.

In his on-court interview, Medvedev said he'd asked himself: "What would Novak do?" when he was in that kind of situation.

"I have to take what I can from the best," Medvedev said. "Rafa, Roger, they also have done it so many times but I've played more times with Novak.

"Some matches I watched him (Djokovic) win the Grand Slams, being two sets to love down ... During all the matches, as soon as I was down a little bit, I was like, 'Just be like Novak. Show him that you are better.'"

The 25-year-old Russian has a 6-2 lead in career meetings with Tsitsipas, although the Greek player beat Medvedev in straight sets the last time they met in last year's French Open quarterfinals. Tsitsipas advanced to the semis here in much easier fashion, beating Jannick Sinner in straight sets in an afternoon quarterfinal.

Medvedev is two wins away from becoming the first man in the Open era to win his second Grand Slam in the next major tournament after his first.

"Actually, I didn't know this stat ... it's a great challenge," Medvedev said in a news conference after his quarterfinal win. "It will be history." 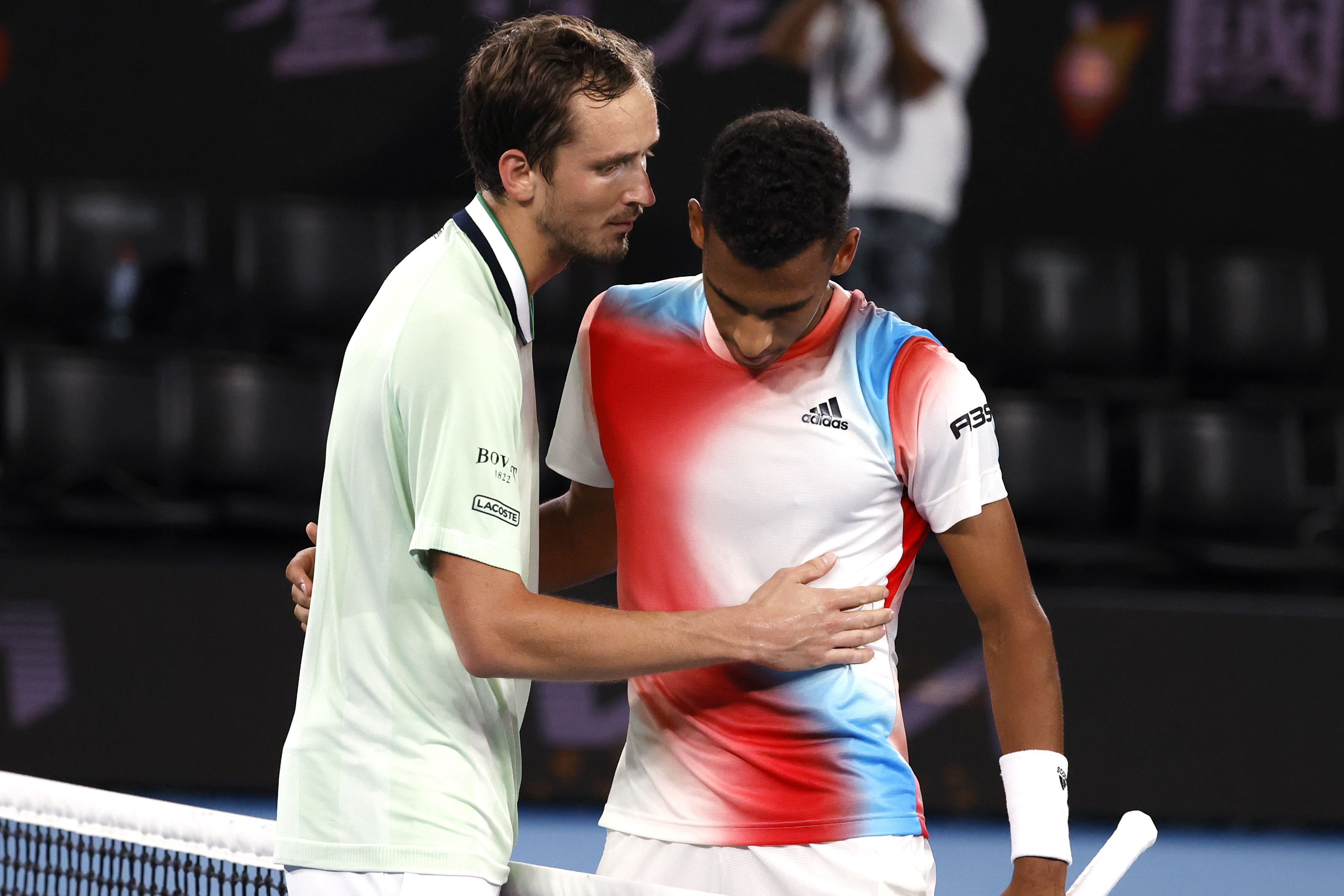 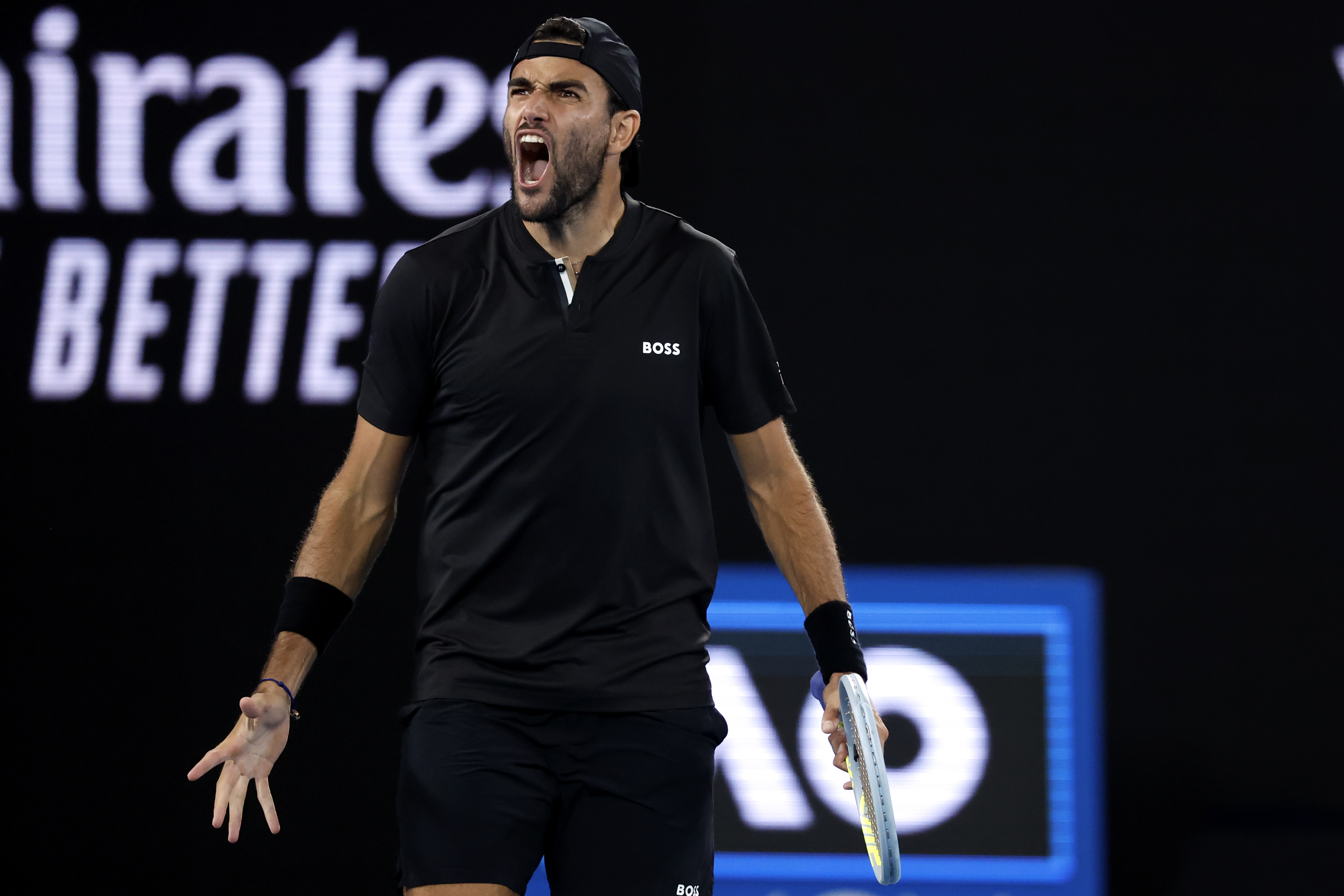 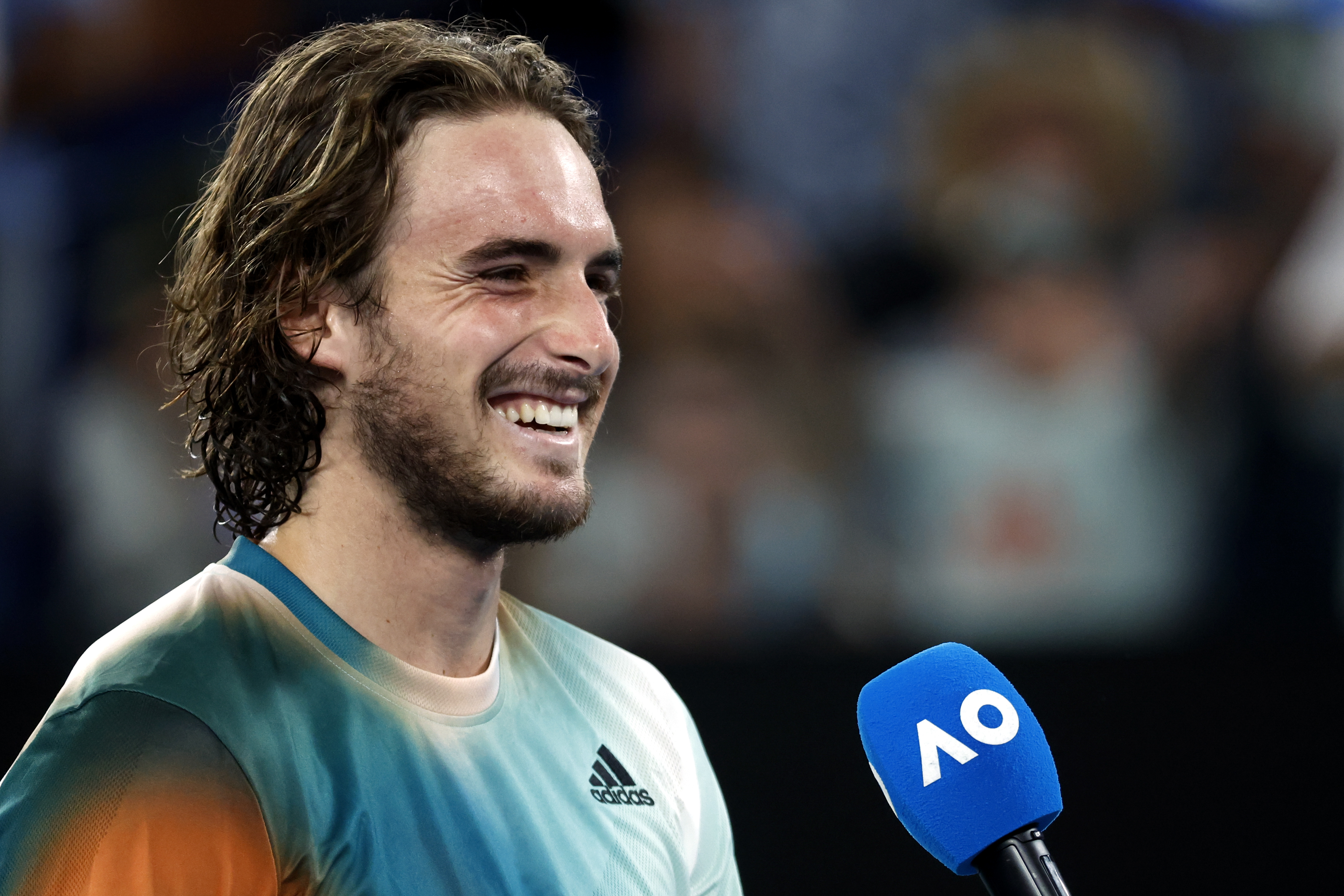 Stefanos Tsitsipas of Greece smiles as he is interviewed after defeating Jannik Sinner of Italy in their quarterfinal match at the Australian Open tennis championships in Melbourne, Australia, Wednesday, Jan. 26, 2022. (AP Photo/Hamish Blair)