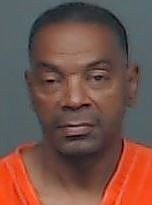 TEXARKANA, Texas -- A 62-year-old man was sentenced to 45 years in prison Thursday for stealing generators and chainsaws from a Nash, Texas, hardware store while the state was under a disaster proclamation related to the COVID 19 pandemic.

Reginald Reece was found guilty of stealing three Caterpillar generators, three Husqvarna chainsaws and more than $1,200 worth of ammunition from Atwoods Ranch and Home in Nash. The items were taken Aug. 23, 2020, and Aug. 24, 2020, and investigators suspected they could be resold at much higher prices because of Hurricane Laura, which caused significant damage to areas in Texas, Arkansas and Louisiana after making landfall on the Louisiana coast Aug. 27, 2020.

Investigator Michael Sutton of the Nash Police Department reviewed video surveillance of the thefts Aug. 25, 2020, and on Aug. 26, 2020, Nash police were notified by Atwood employees that Reece was back in the store. According to a probable cause affidavit, Reece left the store without taking anything Aug. 26, 2020, and was detained as he drove away in a van.

At the time of the thefts, all Texas counties were under a disaster proclamation issued by Governor Greg Abbott in March 2020 because of the pandemic and the area was preparing for the possibility of heavy storms from Hurricane Laura.

Assistant District Attorney Katie Carter said the pandemic disaster proclamation and prior felony convictions allowed her office to enhance the punishment range Reece faced from six months to two years in a state jail to 25 to 99 years or life in prison.

During the punishment phase of trial, the jury heard testimony concerning Reece's long history of committing theft offenses, many while on parole or free on bond in other theft cases. Reece currently has pending theft charges involving property he allegedly stole from Academy Sports in Texarkana on four dates in February and August 2020 as well as a pending misdemeanor criminal trespass charge for allegedly returning to Academy after being banned from the property.

A pending theft charge involving a television allegedly taken from Walmart in August 2020 is among the pending charges listed in a notice prepared by the state in advance of Reece's trial. The notice lists approximately 13 prior convictions for theft offenses in Bowie and Cass counties as well as convictions for aggravated assault, evading arrest, robbery and criminal trespass in Texas and Arkansas.