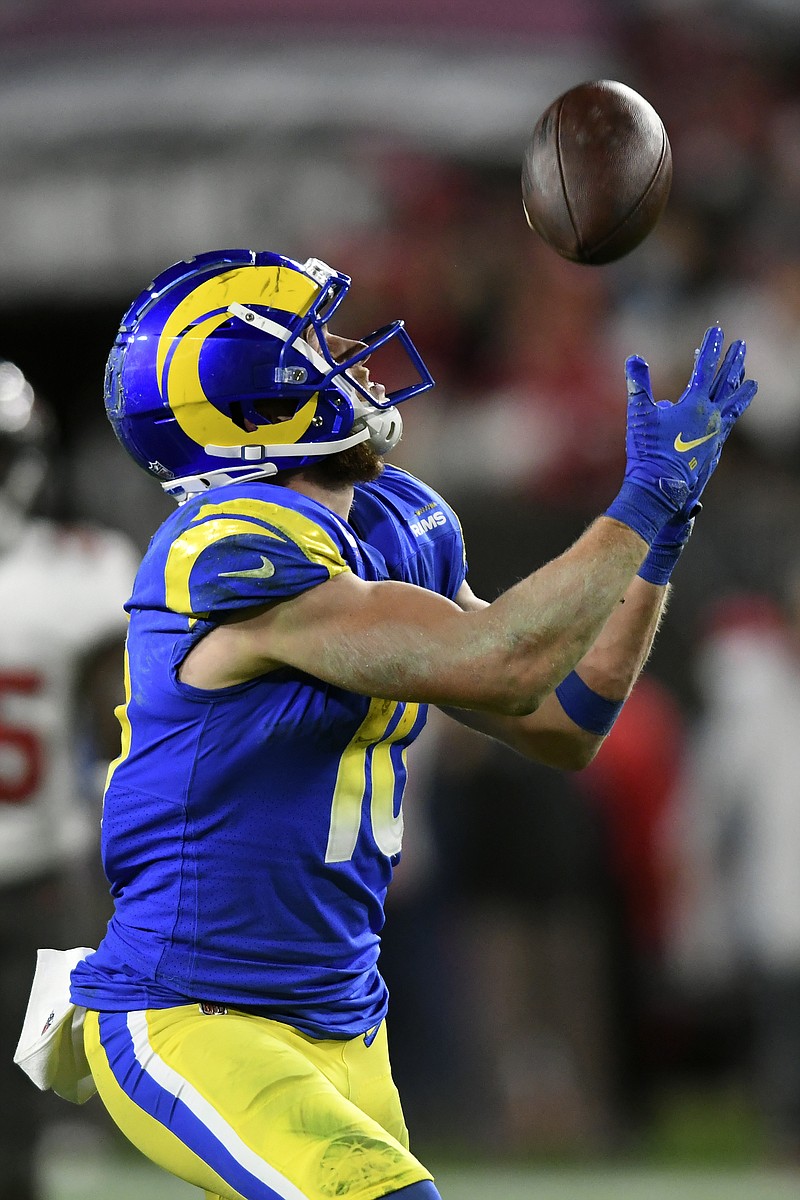 Los Angeles Rams wide receiver Cooper Kupp (10) pulls in a pass from quarterback Matthew Stafford during the second half of an NFL divisional round playoff football game against the Tampa Bay Buccaneers Sunday, Jan. 23, 2022, in Tampa, Fla. (AP Photo/Jason Behnken)

INGLEWOOD, Calif. -- Aaron Donald has been around long enough to know he might not get this chance again. The same goes for everybody in the Los Angeles Rams' constellation of stars around him.

Late in his eighth NFL season as the best defensive lineman of his generation, Donald's career is rich with individual honors, but lacking ultimate team success. The Rams (14-5) made several bold moves this season to build a team around Donald more capable of winning it all, and now they're one step away from playing in a Super Bowl in their home stadium when they host the San Francisco 49ers (12-7) in the NFC championship game on Sunday.

"I feel like I've accomplished a lot in a short amount of time in this league," said Donald, the seven-time All-Pro and three-time Defensive Player of the Year. "The only thing I'm lacking now is being a world champion. To get to that point, we've got to win this week."

After crying on the sideline last January when the Rams' season slipped away in Green Bay, Donald is desperate to take that penultimate step toward his last career goal. So are Matthew Stafford, Jalen Ramsey, Andrew Whitworth, Odell Beckham Jr., Cooper Kupp and several other Rams whose otherwise impressive careers don't have that certain championship ring.

"So many teammates on my team, this is really all they need," said linebacker Von Miller, the Super Bowl 50 MVP with Denver and midseason Rams acquisition. "Aaron Donald, this is all he needs, and he has the whole shebang, you know? Andrew Whitworth and Eric Weddle and all of these guys, I want to do it for them."

These rivals match up superbly, with both offenses relying heavily on an All-Pro receiver (Kupp and Deebo Samuel) and both defenses built around elite, dynamic pass rushers.

But if the Rams (14-5) don't overcome the 49ers' maddening mastery over them, all their big moves will end in checkmate.

San Francisco has won six consecutive meetings with Los Angeles, and not much in their first two meetings this season suggested Rams coach Sean McVay is close to clearing the monumental mental block separating him from his good friend, Kyle Shanahan.

The 49ers feel a related urgency heading back to SoFi Stadium, where they roared back from an early 17-point deficit and surged to yet another impressive victory over their California archrivals just three weeks ago -- clinching a playoff berth, no less.

In fact, San Francisco might owe its entire season to its domination of the Rams: The Niners were 3-5 and going nowhere when they routed Los Angeles in mid-November, kicking off their current 9-2 surge.

If the Rams fall again Sunday, the disappointment will be crushing, but Donald thinks they're ready to shoulder the weight.

"This is a different type of football here that's going on this week," he said. "This week, my mindset is there's no way we're going to lose this game. We have to play four quarters. We have to find a way to finish, and I know we're going to do that."

Shanahan has won seven of his 10 meetings with McVay in their concurrent half-decade careers. Preparing for this showdown was no challenge for both coaches, and they say execution will win the NFC title, not trick plays or surprises.

"You know each other so well," Shanahan said. "We knew what the tape was going to look like before we turned it on, and they are the exact same way. ... We are going to see who makes the most plays and who makes the least mistakes."

The 49ers' formula for beating the Rams has been fairly simple.

McVay and his players know all of this. Whether they have any correct answers to the same test they've already failed twice this year will be revealed Sunday.

San Francisco's defensive front four has been dominant recently, generating five sacks three weeks ago against the Rams, and again in both playoff games. Arik Armstead has 5 1/2 sacks, and Nick Bosa got three. The Niners' depth up front has been difficult to match: San Francisco is the first team to have back-to-back playoff games with at least five sacks in the same season since Washington did it in the 1991 playoffs on the way to the title. The only team ever to do it three straight times in a season was Washington in the 1987 playoffs, also on the way to a championship.

"Usually the teams at this point in the year all have good pass rushes," Shanahan said. "I think it's pretty hard to get to this point when you don't have one."

Stafford earned his first two career playoff victories over the past two weeks, playing nearly flawlessly and justifying his move to LA after a dozen seasons in Detroit. But he has never beaten Garoppolo, the much-maligned San Francisco passer whose occasional mistakes haven't stopped him from going 4-1 as a starter in his playoff career and 3-0 against Stafford.

The winning stretch started with a Week 18 victory in Inglewood where they had so many of their own fans at the game that the Rams needed to use a silent count on offense at times. The Niners are hoping for a repeat on Sunday.

"Hopefully we'll have a sea of red down at SoFi and turn it into Levi's South," kicker Robbie Gould said. 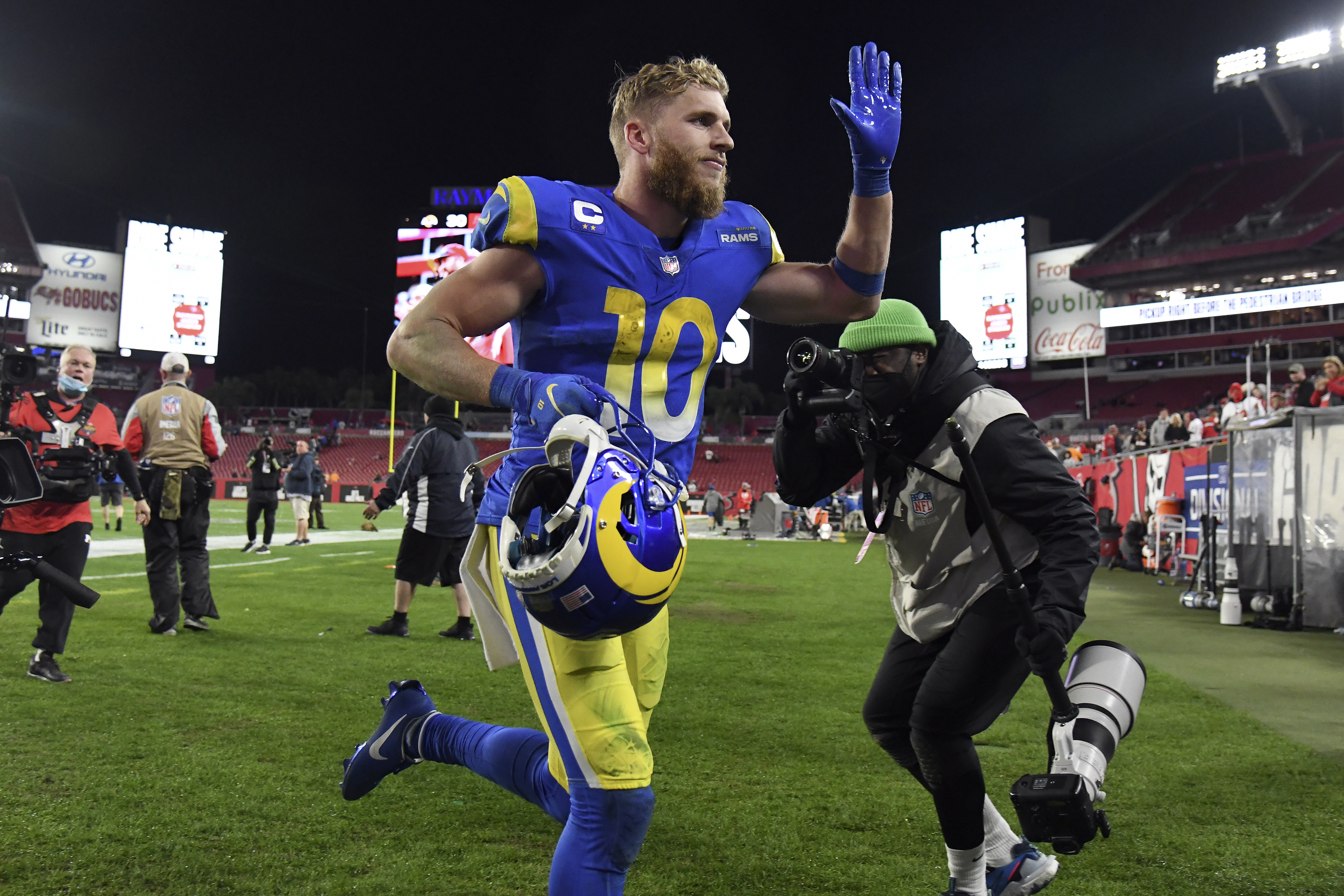 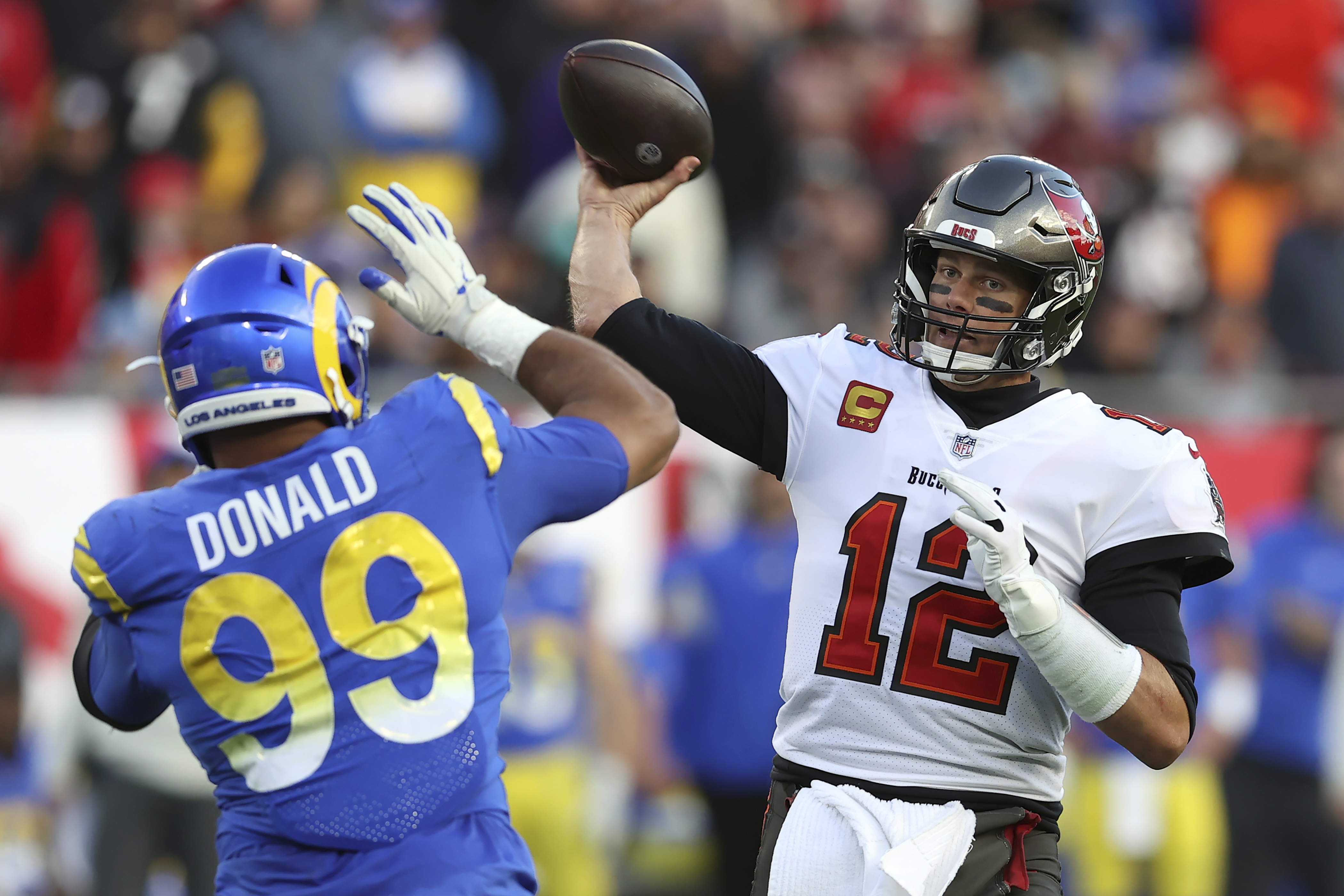 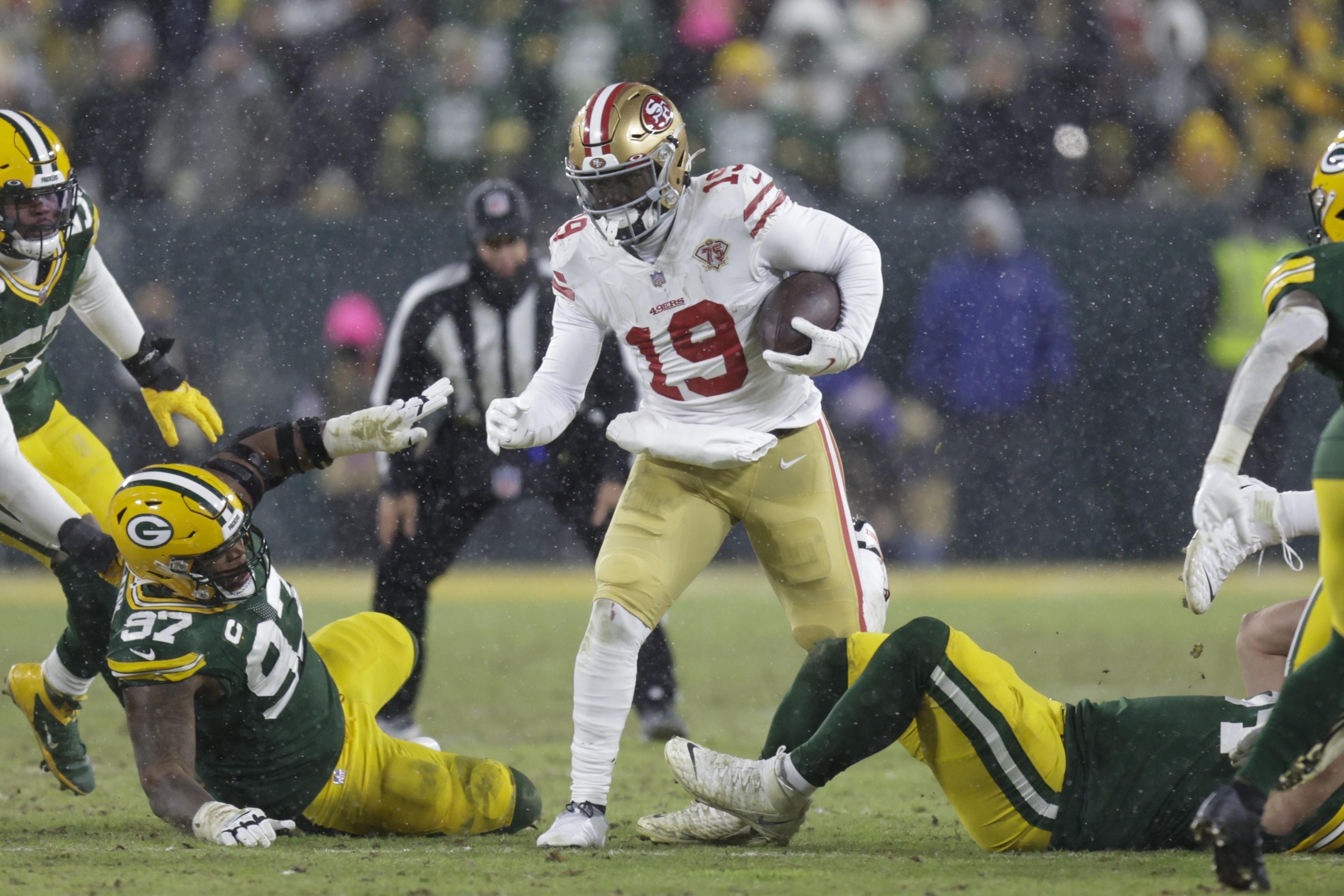 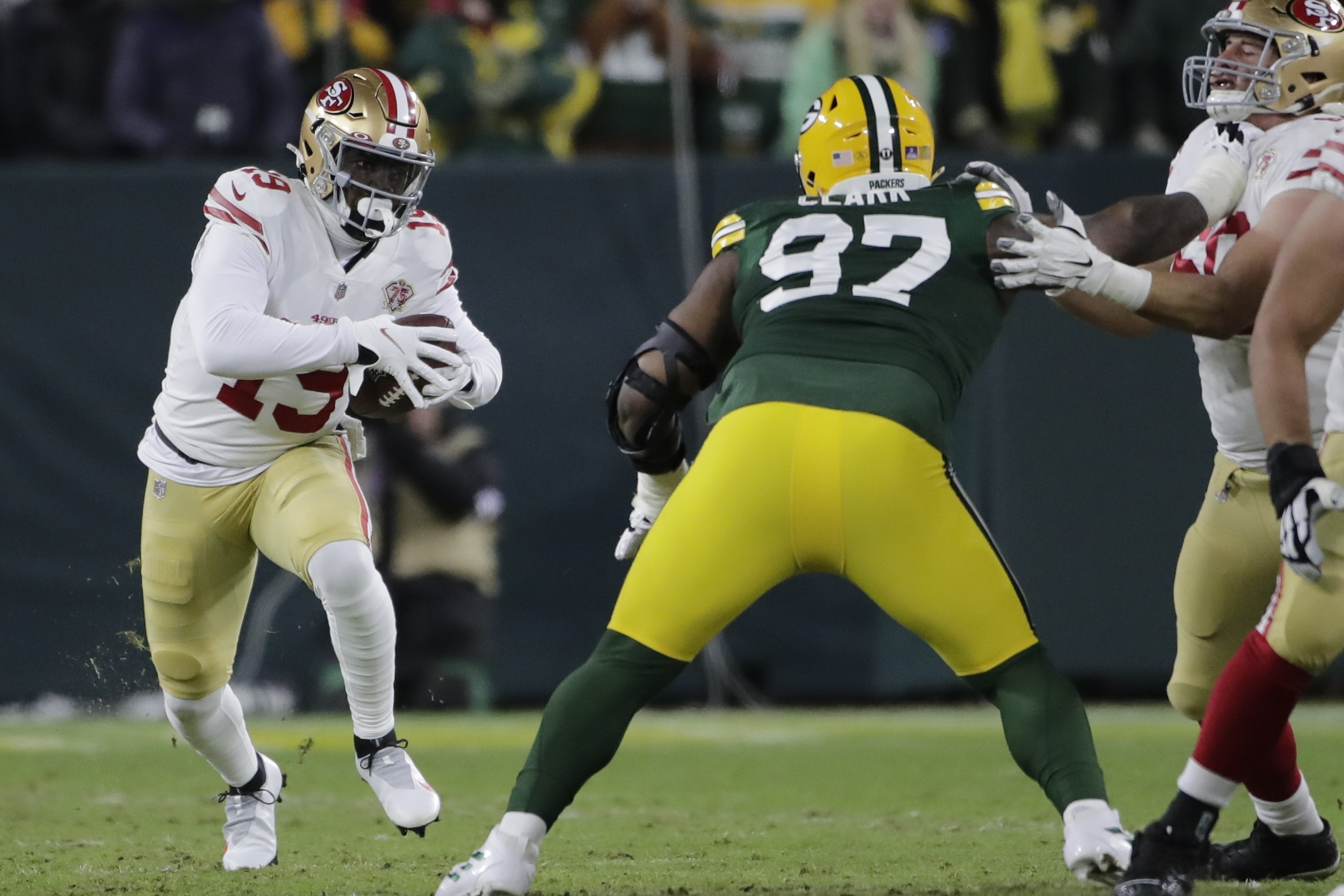 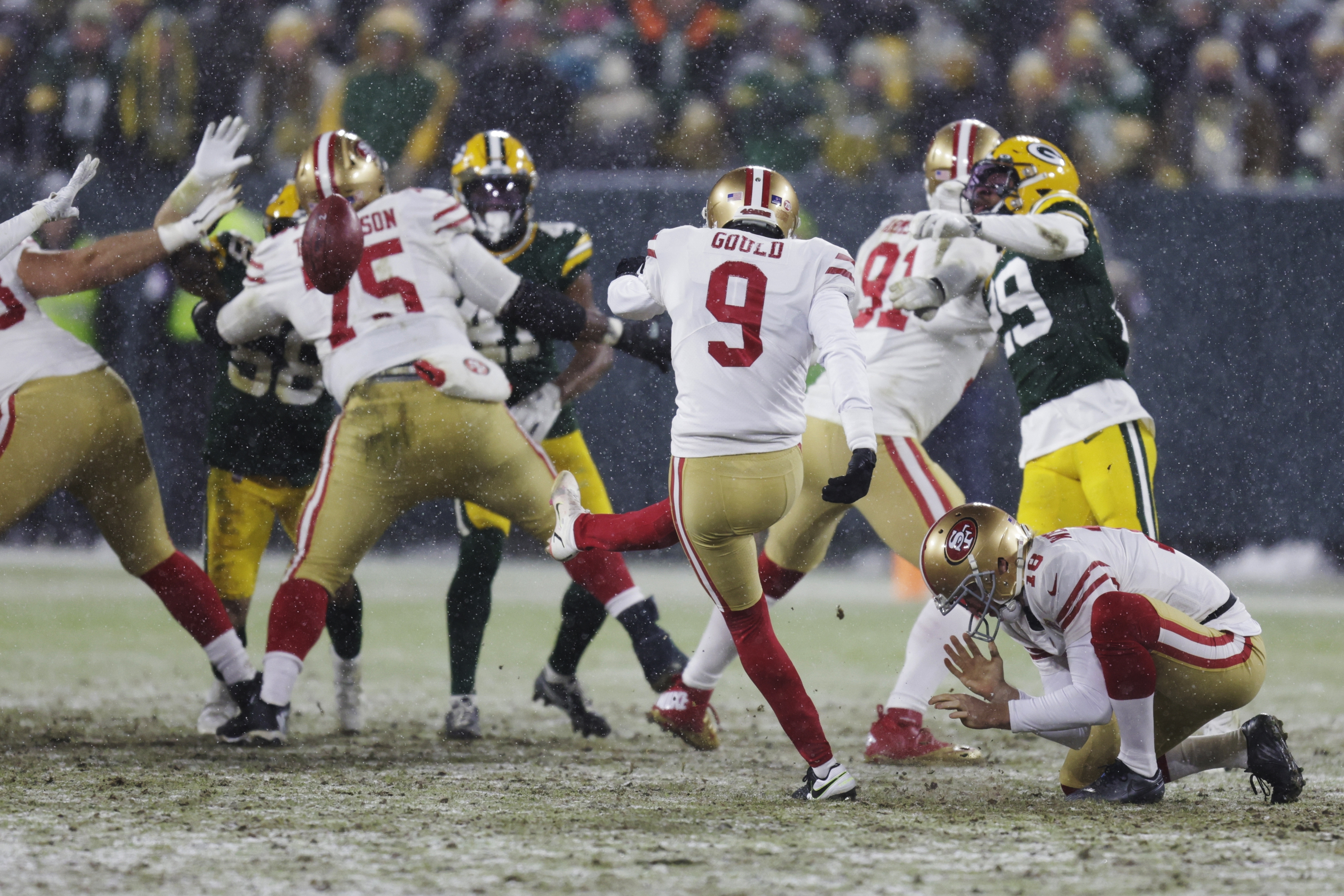