Young, hungry Bengals off to KC to face grizzled Chiefs 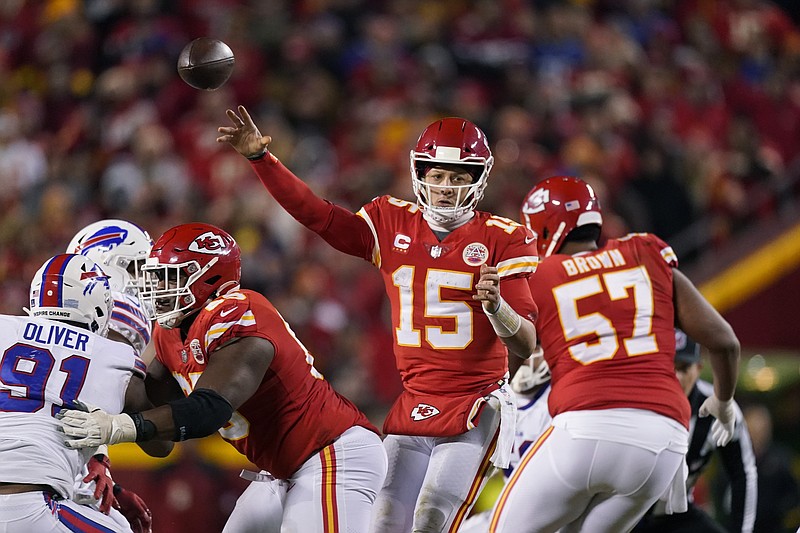 KANSAS CITY, Mo. -- The Kansas City Chiefs have been in this position before. Walking across the cold Arrowhead Stadium parking lot, dressing in their revamped locker room, strolling through the narrow tunnel and spilling onto the field for the AFC title game.

In fact, the Chiefs have done it each of the last three years.

It will be a wholly new experience for the Cincinnati Bengals, though, when they follow the same path Sunday with a trip to the Super Bowl on the line. Only a couple special teams players were alive, and coach Zac Taylor just starting out in elementary school, when they beat the Bills in January 1989 in their last trip to a conference championship game.

"I think it helps this time of year having a pretty good idea of what this is all about," acknowledged Chiefs coach Andy Reid, who can tie Tom Landy for second in NFL history with his 20th playoff win. "They know how we go about our business, the intensity, whether it's practice or what we expect out of the game."

That experience came in handy last Sunday, when the Chiefs went 44 yards in 13 seconds to kick a field goal and force overtime against Buffalo. Patrick Mahomes and Co. proceeded to win the coin toss, and ultimately the game, by marching right downfield for a touchdown without giving the Bills another chance with the ball.

It was the kind of unforgettable, heart-stopping victory that can give an NFL team plenty of momentum for the rest of the postseason -- provided they get over it quickly enough to prepare for the next one.

"It was an awesome game and win that we'll remember forever," Mahomes said, "but we're not done. We're trying to get out there and win an AFC championship and try to get to the Super Bowl."

The Bengals had a thriller in their own right to get past top-seeded Tennessee last weekend. They blew a 16-6 second-half lead, then put rookie Evan McPherson in position to kick a winning 52-yard field goal as time expired.

It was the first road playoff win in franchise history. Now, they're after another in Kansas City.

"We're excited about the opportunity," Bengals quarterback Joe Burrow said. "If you want to do the things that we want to do, that's a team that you're going to have to beat every single year. The AFC has run through them for four straight years.

"So, you know, we're excited about the opportunity. We're gonna have a great week of practice and be ready to go."

The Bengals beat the Chiefs on Jan. 2 in Cincinnati in a back-and-forth thriller that ended when McPherson drilled a 20-yard field goal as time expired. Burrow threw for 446 yards and four touchdowns, most of it going to wide receiver Ja'Marr Chase, while Mahomes threw for 259 yards and two scores against the lightly regarded Cincinnati secondary.

"The Chiefs do a good job of employing a variety of schemes to try to keep you off balance," Taylor said. "I thought Joe and Ja'Marr did a good job of being on the same page in that game."

The two teams combined to send nine players to the Pro Bowl this season, six from Kansas City and three from Cincinnati, and there's another half-dozen players from each team that probably had a good argument to make it.

Of course, players for the winner Sunday will be heading to the Super Bowl instead.

Burrow and Chase are 6-0 when playing together in postseason games, including their four games together at LSU, when Chiefs running back Clyde Edwards-Helaire was a teammate. Burrow has averaged 381.8 yards passing with 22 TD throws during those six games, while Chase is averaging 106.8 yards receiving and has four of the scores.

Figuring out how to better protect Burrow has been a priority for the Bengals this week. They've struggled all season, especially against the better pass-rushing teams, and Burrow was sacked a stunning nine times by Tennessee.

Lost amid the playoff chaos last weekend was the fact that few people outside Kansas City thought the Chiefs would even be in this position. They dropped three of their first seven games, including an embarrassing 27-3 loss in Tennessee, and an overhauled defense was allowing yards and points in staggering numbers.

The Chiefs turned things around quickly, though, and have lost just once since that October day -- to Cincinnati.

"I think I just saw the persistence and the championship swagger, I guess you would say, of the team we have," Mahomes said. "Guys didn't hang their head. They just wanted to get better. I think that process of every day getting better and better has put us in this situation now, and we don't want to come up short. We want to keep this process going, and get better, and try to leave our best football out there on the football field." 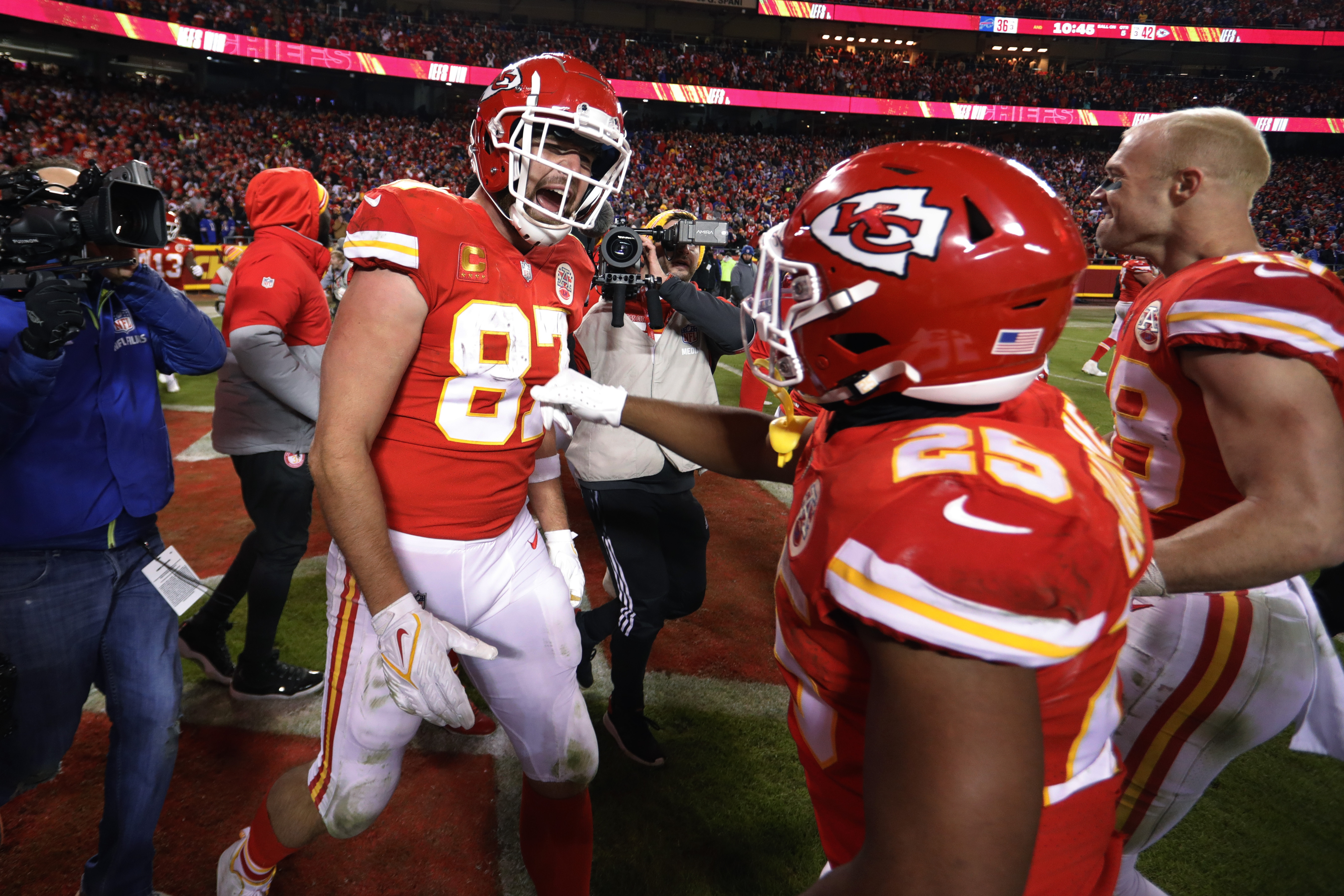 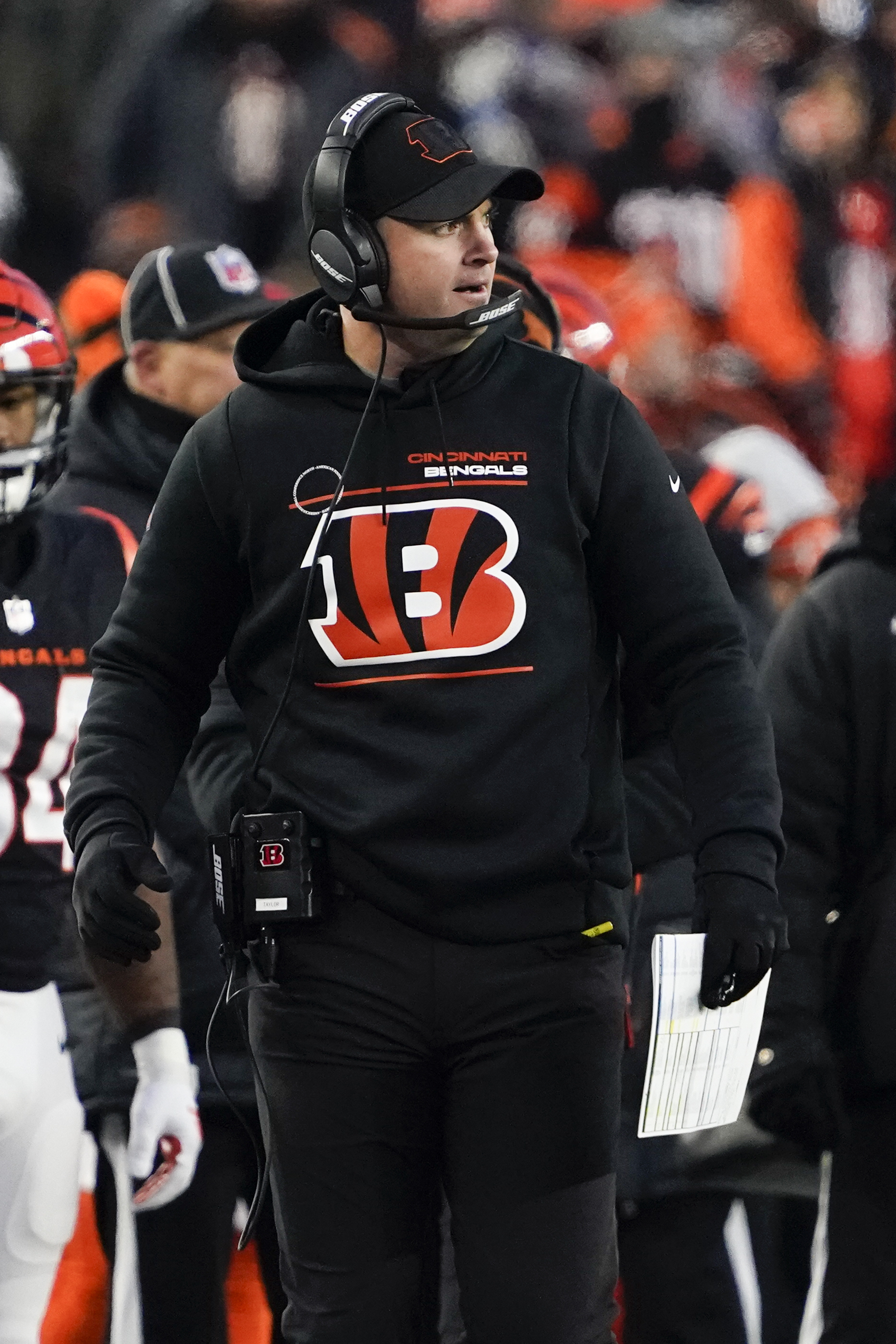 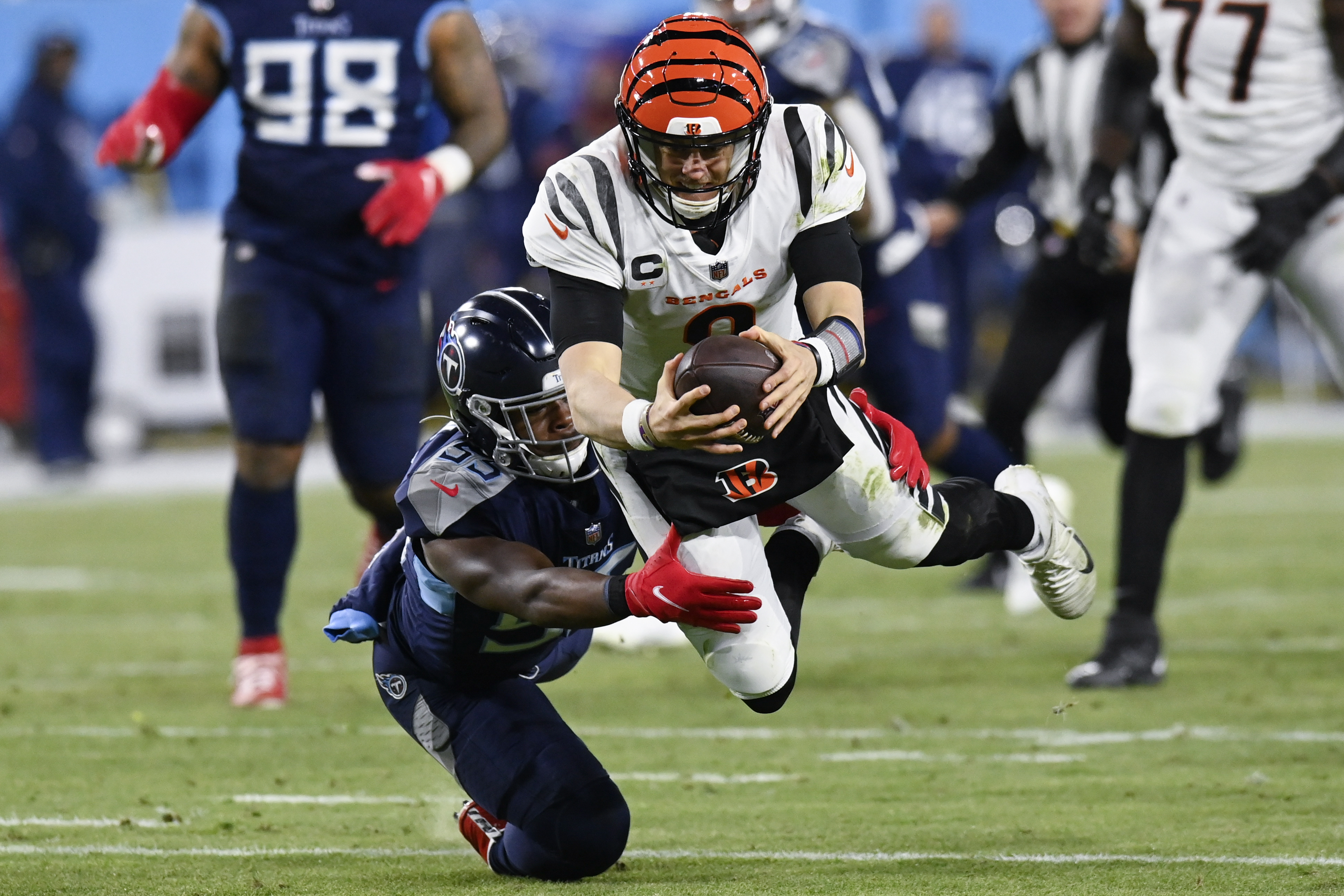 Cincinnati Bengals quarterback Joe Burrow (9) leaps for a first down against Tennessee Titans inside linebacker Jayon Brown (55) during the second half of an NFL divisional round playoff football game, Saturday, Jan. 22, 2022, in Nashville, Tenn. (AP Photo/Mark Zaleski) 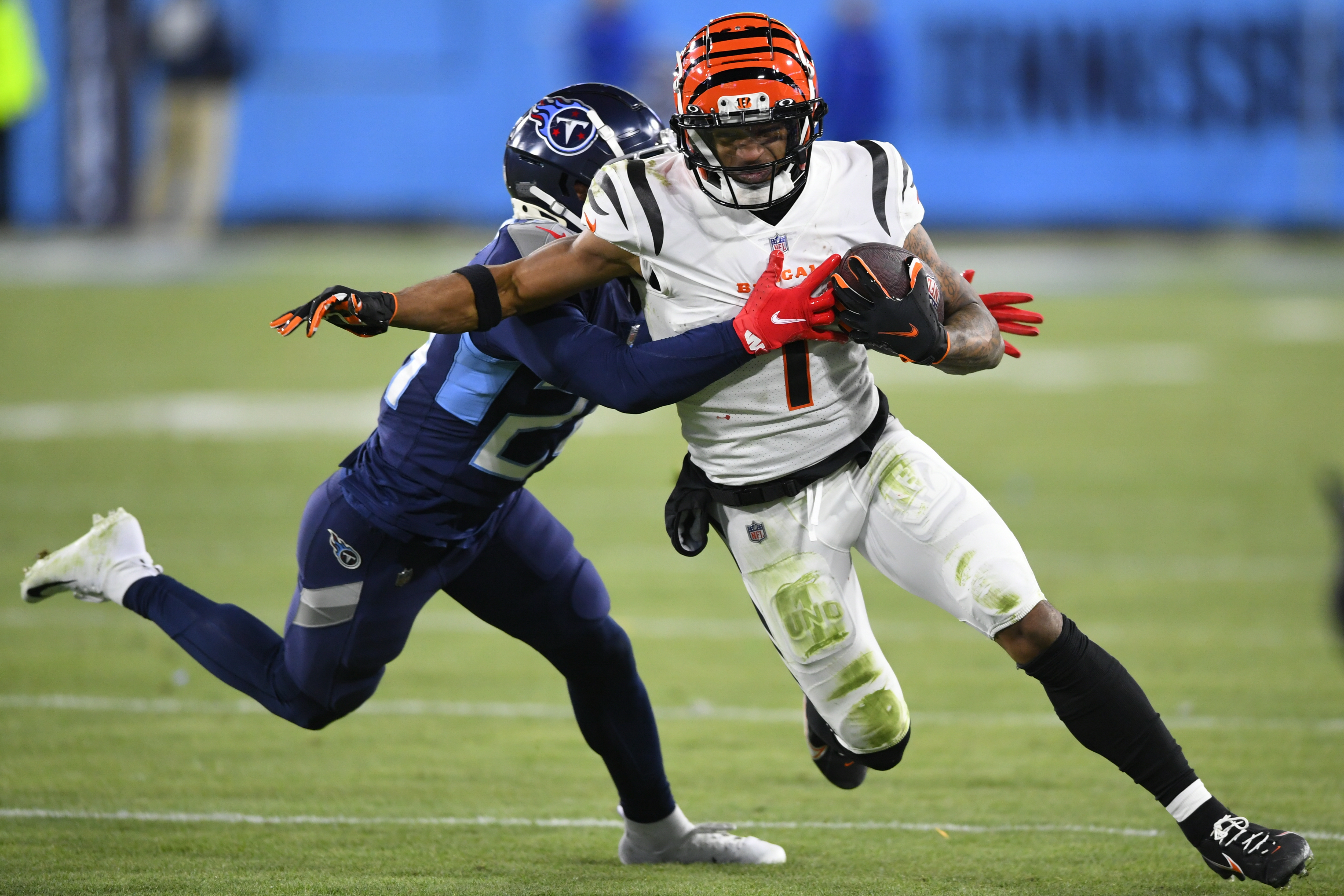