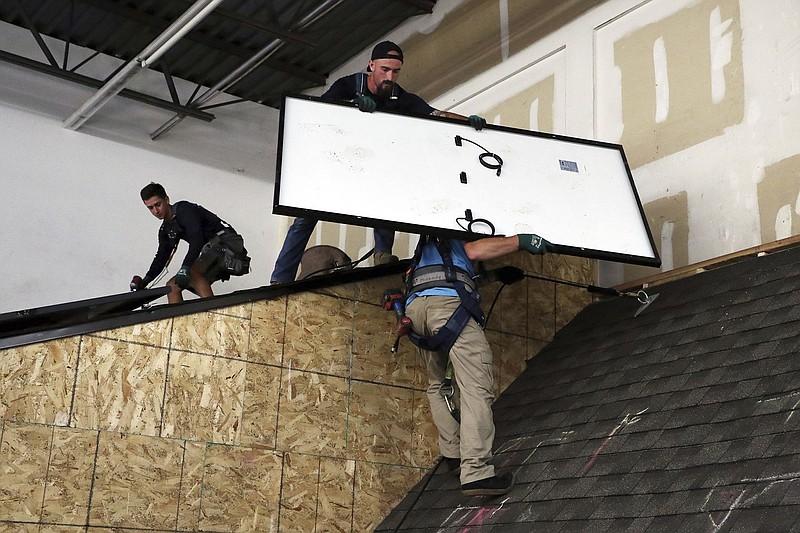 Ford began deliveries of its F-150 Lightning last month, and the electric version of the truck features a new option with a lot more utility than all-weather floor mats.

For about $5,000, not including installation costs, you can add a bidirectional charging system that turns the EV pickup into a backup generator capable of powering your home for three days.

Sunrun, the nation's largest residential solar power company, developed the groundbreaking charging system with Ford, tapping into the Lightning's massive battery to keep the lights on during an electrical outage, a technology that could have widespread application for the growing EV industry.

California-based Sunrun is also looking to leverage its charging system to spur adoption of another technology: rooftop solar power.

"There's a real connect between folks that drive EVs and want to charge their EVs with clean power," said Sunrun spokesman Wyatt Semanek. "We're hoping to get some synergies there."

Electric vehicles and residential solar power are niche segments in the auto and energy industries, but both are gaining traction in Illinois, boosted by federal and state incentives to convert to renewable energy sources in the coming years. Combining the two could put Sunrun's massive suburban Chicago warehouses at the center of the state's expanding clean energy initiatives.

Illinois has become a hotbed for large-scale solar projects in recent years, with renewable energy developers staking out turf on the rural fringes of the Chicago area to build dozens of solar farms to feed the electric grids of Commonwealth Edison and other utilities.

The state's solar energy boom is driven by legislation requiring Illinois utilities to get 40% of their power from renewable sources such as solar and wind by 2030, essentially doubling the projected renewable energy used this year, according to the Illinois Power Agency.

Residential solar is a significant focus of the state's Climate and Equitable Jobs Act, a renewable energy bill signed into law by Gov. J.B. Pritzker in September. The bill provides $610 million per year for an Adjustable Block Program that pays residential, commercial and community solar system owners for generating renewable energy fed into the grids of ComEd, Ameren and other utilities.

ComEd pays the solar owners upfront for 15 years of projected renewable energy credits. All ComEd customers fund the program through the Renewable Portfolio Standard line item on their bills.

Sunrun entered the Illinois market in 2017, following the passage of the Future Energy Jobs Act, which set an initial goal for Illinois utilities to get 25% of their retail power from renewable sources by 2025. The Climate and Equitable Jobs Act raised the renewable energy target and increased the incentives paid for residential solar power generation.

"What the Climate and Equitable Jobs Act did on the solar side of things was create a stable funding source to keeping the solar industry growing in Illinois," said Amy Heart, vice president of public policy at Sunrun.

Sunrun has grown to more than 500 employees working out of warehouse facilities in Des Plaines and Bolingbrook, Illinois. The company has completed more than 17,000 Illinois residential solar installations over the past five years, making it the state's largest supplier of residential solar power.

An average Sunrun residential solar installation in the Chicago area is for a 7-kilowatt system costing about $21,000 -- before incentives, Heart said. Sunrun also leases systems, but the state and federal incentives are only for outright purchase.

The state currently pays about $68 per renewable energy credit, which for a 7kW system would generate about $612 per year, according to Scott Vogt, vice president of strategy and energy policy at ComEd. Homeowners that install new systems can expect an upfront check for about $9,200 from ComEd for the projected 15 years of solar energy credits.

The solar system owner would also be entitled to a 26% federal investment tax credit on the purchase, which at $21,000 would mean another $5,460 in savings.

The federal and state incentives reduce the cost of the $21,000 rooftop solar installation to about $6,300. At that price, homeowners would get the solar system investment back in five to seven years, including net metering credits for excess energy produced and purchased by the utility, Vogt said.

After the investment is recovered, the typical residential solar owner can expect to save about $700 per year in energy costs, Vogt said.

The state incentives have already made a big difference for the growth of residential solar in Illinois. At the end of 2016, ComEd had 722 residential solar customers, Vogt said. That number has grown to 27,000 customers as of May.

While the solar growth rate is robust, it still represents a fraction of the more than 4 million ComEd customers in northern Illinois.

The Illinois Power Agency, which oversees the Renewable Portfolio Standard, projects residential solar power to double in the state over the next two years.

David Kolata, executive director of the Citizens Utility Board, a nonprofit watchdog group, said rooftop solar has been generating increased interest among consumers as prices drop and incentives grow. At the same time, Kolata said there are limits to its widespread adoption.

"Solar can't be put on every residential home for a variety of reasons," Kolata said. "The roof may not be right, you may not have control over your roof if you live in multifamily housing, or you may not have enough exposure to the sun."

ComEd has an online solar calculator to determine if your home would benefit from installing solar panels.

Brutto Thomas, 64, an automotive service manager, leased a solar rooftop system in 2018 for his three-bedroom Aurora, Illinois, home. Before installing solar, his electric bill ran about $250 per month during the summer, Thomas said.

Last month, his ComEd bill was about $13, with another $55 going to Sunrun for the system lease.

"And I crank the AC," said Thomas, 64. "The savings are unbelievable."

Thomas said 12 solar panels are installed on the roof facing his backyard. They catch enough sunlight that even during the long, dark Midwestern winter, his combined ComEd and Sunrun bills are roughly the same as his pre-solar electric bills.

William Freeman installed a leased rooftop solar system on his four-bedroom University Park, Illinois, home last summer. His ComEd bill and Sunrun lease totaled about $100 in June, down about $60 from the same month last year -- before adding solar.

The 60-year-old retiree, who has lived in his house for 16 years, said the solar panels are installed on the front and side roof.

"We did it because with the air conditioner running in the summertime, the bills were starting to get a little high," Freeman said. "With the panels up there, it kind of lowered the bills and we were just looking to save here and there, because we're both retired."

Kolata said generating savings through a leased solar system can be "complicated" by the financial terms. In addition, solar lessees miss out on thousands of dollars in federal and state incentives that offer a relatively quick return on investment for the buyer.

Solar lease customers "need to read the fine print" to make sure the energy savings will be greater than the financing costs, Kolata said.

"We're not saying that leasing is always a bad choice," Kolata said. "I think at the end of the day, if you can buy a system, especially given all the incentives out there, you're going to be better off."

Under normal circumstances, the sun powers the home, which charges the EV. But when the power is out, the F-150 Lightning extended-range battery system can store 131 kilowatt-hours of energy -- enough juice to power a home for three days.

If there's enough sun, the Lightning can keep the lights on a lot longer than that, Semanek said.

"Folks essentially create a microgrid of their own homes, to where they're self-sufficient powering (them) with rooftop solar during the day," Semanek said. "Then at nighttime, when the sun goes down, they're able to pull from those EV battery packs to run their homes."

Ford is out in front of the potentially transformational energy solution. Several companies are developing aftermarket systems and other EV manufacturers are exploring the technology, but even market leader Tesla, which also sells solar roofing and battery backup systems for the home, doesn't yet offer bidirectional charging.

While EV manufacturing is gearing up, consumer adoption has a long way to go to hit Pritzker's goal of 1 million EVs by 2030. There are currently 34,706 electric vehicles registered in Illinois, or less than 1% of the state's 10.3 million vehicles, according to Dave Druker, a spokesman for the Illinois secretary of state's office.

The F-150 Lightning is being heralded as a potential game changer for the adoption of electric vehicles, packaging the technology into a utilitarian truck that can haul cargo and blow the doors off of a sports car. Ford launched production in April at the Rouge EV center in Dearborn, Michigan, and expects to fulfill 200,000 preorders by mid-2023.

The Lightning's $40,000 starting price is offset by a $7,500 federal tax credit for electric vehicles, and a $4,000 Illinois rebate that began July 1 through the Climate and Equitable Jobs Act.

The pairing of solar and EV charging technology may prove to be a game changer as well.

"We're moving into a very interesting way that we are thinking about generating power and consuming it," Semanek said. "And I think auto manufacturers are seeing that and they're definitely wanting to jump into that headfirst." 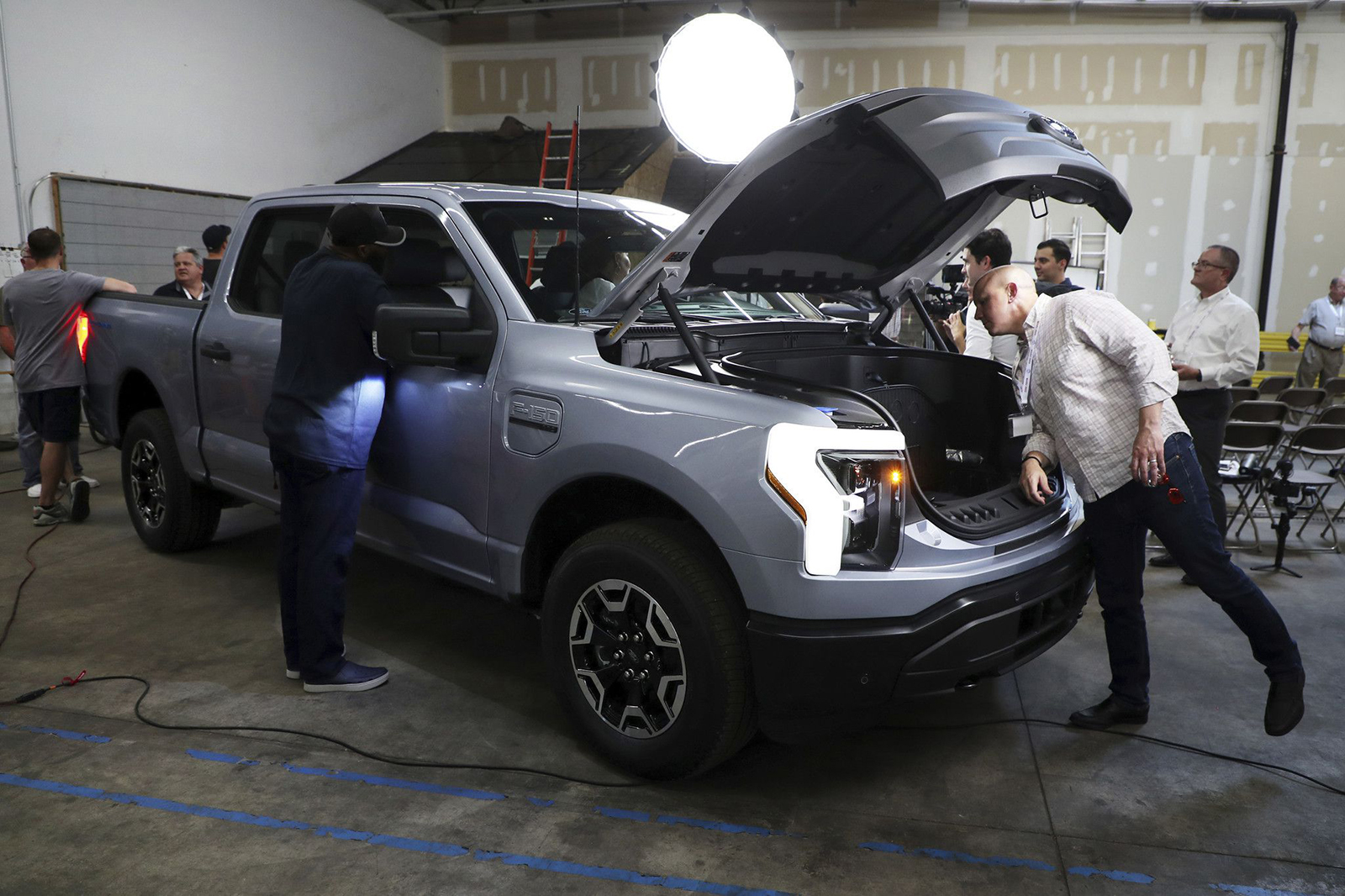 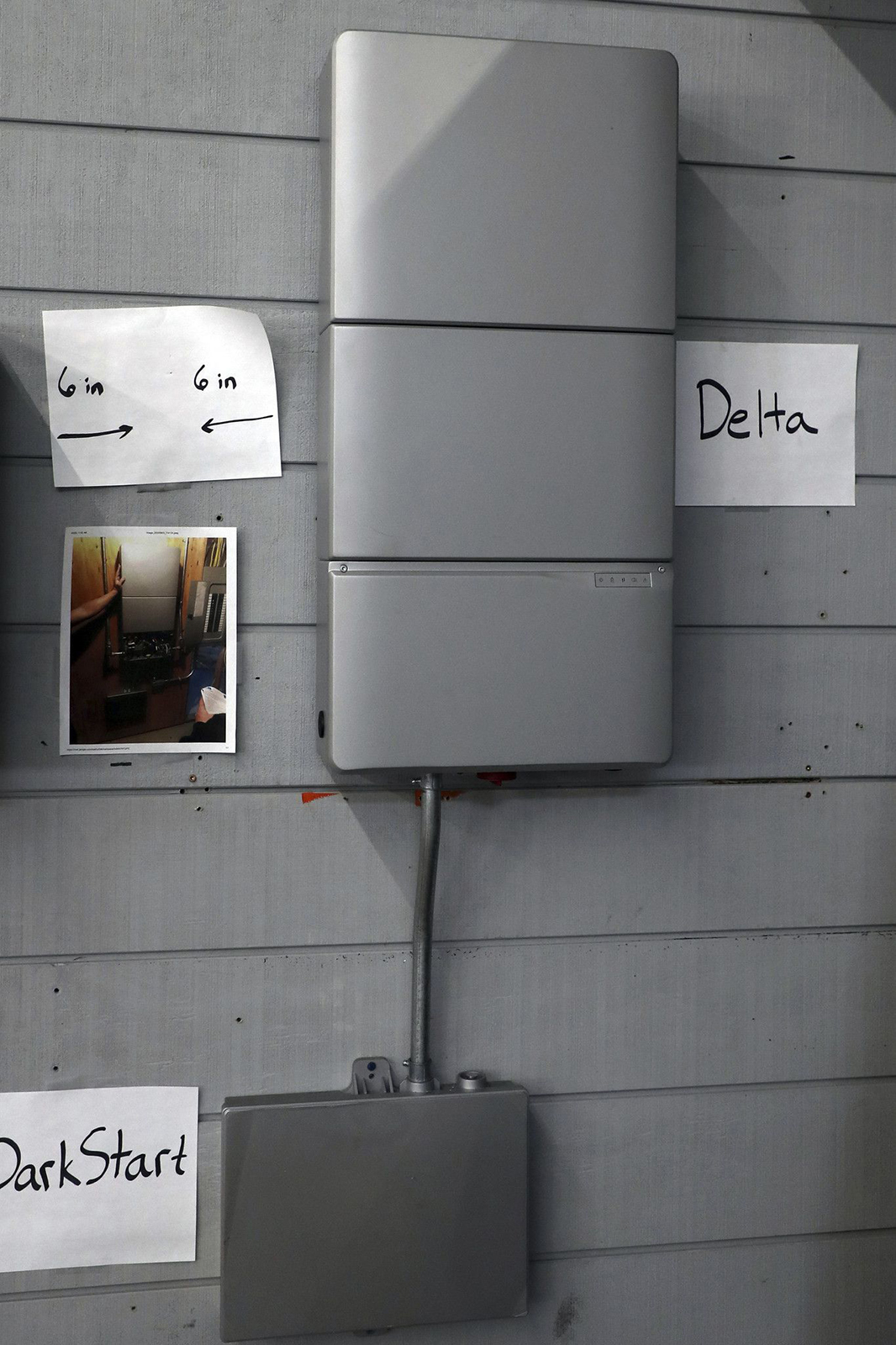 Print Headline: This solar installer is turning Ford F-150 Lightning EV into a backup home generator that can be powered by the sun