In Texas' grid-testing heat wave, what if your home could power itself? 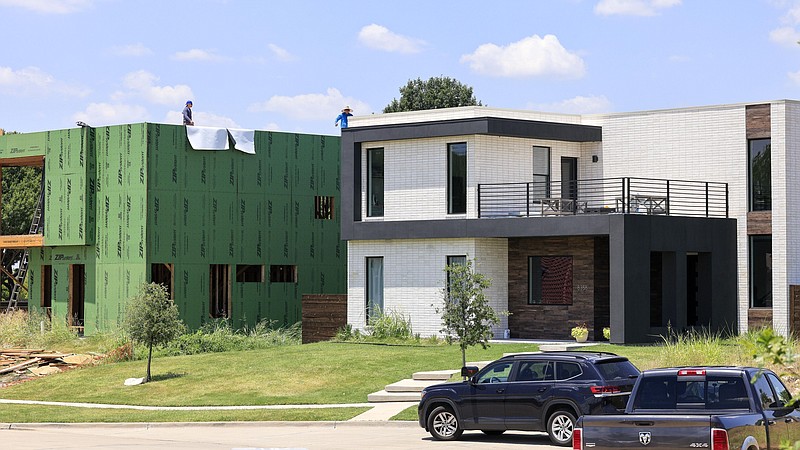 Stepping into Priya and Imran Vithani's home feels like opening up a magazine.

Filled with stainless steel appliances, big windows and sleek features, it's aesthetically pleasing inside and out, aside from the moving boxes.

As some of the newest residents of Sunset Modern, the Vithanis are still settling into their Accord -style, two-story house. The development, built by The New Modern Home in Frisco, Texas, has less than 10 homes in various stages of development after breaking ground in 2018.

Developer Jimmy Tanghongs of The New Modern Home combined a chic aesthetic with advanced technology and sustainable building to create a new generation of homes in Frisco, Garland and Dallas. Marketed as self-sufficient smart homes, they come equipped with a 4-kilowatt solar panel package, meaning homeowners are producing almost all of the energy they consume.

The Vithanis join the ranks of 210,000 Texans relying on residential solar panels to turn the state's plentiful sunshine into electricity.

"Our solar panel package produces about $80 of electricity per month. A home this size, it might need $100 to $110 per month [of electricity]. That should leave the homeowner with a small electric bill," Tanghongs said.

The homes are still connected to the ERCOT grid, but they use net meters, meaning they produce energy that flows to the grid and rewards homeowners with financial credits. That lets homeowners pay only for their net usage, keeping costs low. They are also able to pump power back into the grid when electricity is scarce.

In theory, when homes make their own power, they take stress off the grid by lowering the number of houses requiring grid-created power. They're also able to produce more power than they use, supplementing electricity available during times of extreme heat or freezing temperatures when power outages are more common.

The Sunset Modern homes are not yet producing enough power to pump back into the grid, but their design allows for that possibility in the future. And that could mean less stress for homeowners when they get a warning email from ERCOT that they may lose power in the hottest part of the day.

Tanghongs put a lot of thought into the builds, and the flat-roofed modern design serves both an aesthetic and functional purpose.

"You want the solar panels tilted towards the sun, so if we're 33 degrees above the equator, you want the panels pointed 33 degrees so when the sun hits it, they absorb 100% of the energy," Tanghongs explained. "With our flat-roof home, you can cover the whole roof with panels. You don't lose any area to shading."

The Vithanis are planning to expand their solar production with more panels once they receive their first power bill next month. The couple made their move into a 1,969-square-foot, three-bedroom, two-bath home just a few weeks ago.

"It's kind of gamifying the process -- I'm using this much energy, I'm saving this much energy," Imran Vithani said, holding his hands in front of him, one much higher than the other. "Do I want to invest more to maybe get additional supplements, or now that we're talking about an all-electric home, my next question is do we want to get a battery?"

Before moving to their smart home, the Vithanis lived in a townhouse in Plano. They started to search for a new home after the 2021 historic freeze in Texas that left much of the state without power for days and 246 people dead.

"We were victims of the freeze," said Imran Vithani, vice president of strategic development at StaffDNA. "We actually had a plumbing issue where we did not have water for multiple days. We also had issues with power during that time, so we know what it's like to be in Texas and experience that, especially something that you would not consider happening in modern times."

The couple did months of research, taking into account housing prices, mortgage rates, development timelines and electricity costs, and eventually landed on Tanghongs' development. Single-family homes there start at $495,000 and reach $938,000 on top of buying the lot.

With a competitive housing market and mortgage interest rates skyrocketing above 6%, the couple had to look at other ways to bring down the cost of owning a home. That's where electric bills came into play.

"One consideration that I did have is, okay, it's been a year [since the freeze], electricity costs have literally doubled in terms of kilowatt prices," said Imran Vithani. "I understand that might not be a big factor for people, but you want to look at your long-term costs."

They aren't the only ones who saw the advantage.

Just down the street, Hawk Jung, director of mobile solutions and services at Premier LogiTech, and his wife Ji had 240-volt Juicebox vehicle chargers included in their build to plug in their two BMW hybrid vehicles at night.

The majority of the Jungs' electric bill comes from charging the vehicles, about $100 a month for each. Their total bill averages just over $200, meaning the amount they're paying for powering their home is minimal.

The Jungs moved to the neighborhood in December when they wanted to downsize from a 3,600-square-foot home to the 2,700 square feet they have now. Their older son had already left for college, and their younger son will be leaving for Texas A&M in the fall.

Hawk Jung said with a smaller home and higher levels of efficiency, they're paying less than before. He estimated that they've saved $1,000 in electricity costs in the seven months since they've moved in.

Tanghongs said his homes are a draw for homeowners who want energy independence.

Sunset Modern's model home became fully operational on June 7. Since then, the house has generated 1789.4 kilowatt hours of electricity over 38 days, or just under $100 worth.

It's not just power these homes are saving.

"We are trying to conserve as much water as possible, too," Tanghongs said.

Each home is equipped with an internet-connected smart sprinkler system that uses low flow nozzles. The system can follow weather reports, watering less when there is rain and more during times of high heat.

"We try to eliminate wood on the outside of the home," Tanghongs said. "We've chosen long-lasting materials like brick and stucco, a type of lightweight concrete, and metal as much as possible. Bugs don't eat it so you don't have to worry about replacing it, and you don't have to caulk and paint like you would a traditional home."

The homes don't come without challenges.

"We don't have any storage, but we are consuming whatever we produce right now. Our problem is at nighttime when we're not producing [electricity] and there's a blackout, then we've got no power here," Tanghongs said, speaking of his own experience living in one of the smart homes. "The only way to get around it is to install batteries. Batteries are expensive."

That cost isn't lost on the Vithanis, who also hope to install battery storage someday to avoid facing any blackouts.

The solar panels "are definitely not enough to sustain our lifestyle independently," said Priya Vithani. "We would have to expand upon that, and we just bought the home so we would have to save our pennies to be able to afford [batteries]. Down the line, we would explore that opportunity."

Tanghongs is also dealing with a difficult housing market following the pandemic. While he's been able to maintain demand for his houses, he's seen a real downturn in interest in buying a home as interest rates increase.

"I think that the price point is something that as a buyer I'm really crossing my fingers I'm going to get my money back on this. I think my price per square foot is easily over $300," said Imran Vithani.

The Vithanis say they're also paying for peace of mind. Imran's mother lives in McKinney and has lost power, sometimes for days at a time.

"I don't think it's acceptable that our parents that are close by should have ever experienced anything like that," he said. "When your parents are getting older, you want to make sure that they're comfortable."

His wife said putting in a future battery storage option at their house could also support their relatives if they were to lose power again.

"I don't think people want to put up with the whole ERCOT situation. When I get those emails, I just want to figure out how I can be as independent as possible," said Imran Vithani. "I already work 50 to 60 hours a week. Is this something I really want to have to add to my plate to worry about?"

Tanghongs' next project, a series of 50 smart-version townhomes in Garland, will be a stepping stone for making this housing option more affordable. He said the "price point will be down in the $400,000s."

"I was born here, so I'll plan to build here forever," Tanghongs said. "Dallas is growing so fast that I'll always have a customer to build for."

Print Headline: In Texas' grid-testing heat wave, what if your home could power itself?