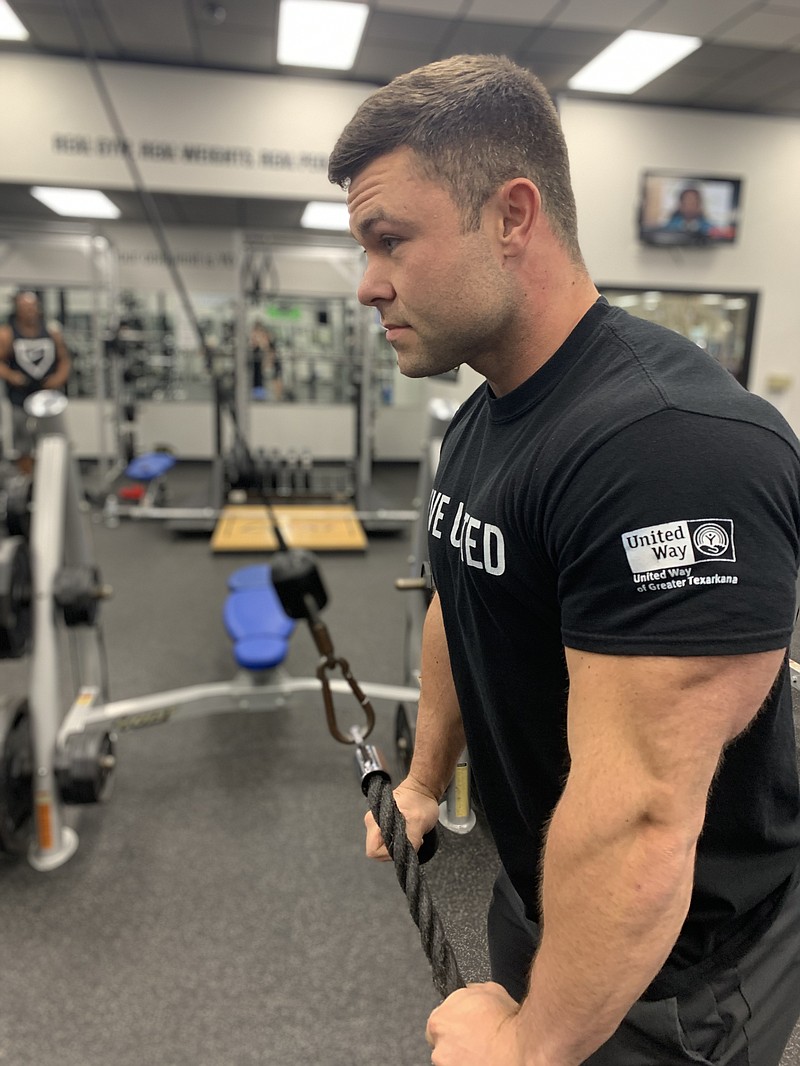 Physical trainer Matthew Lovell works out at Legends Gym on June 29, 2022, in Texarkana Texas. Lovell, who has been bodybuilding for seven years, said eating right, working out and getting enough sleep are key to muscle gain. (Staff photo by Mallory Wyatt)

"These kids are coming in with excessive breast growth (gynecomastia), and their testosterone levels are zero," Bowen said. "It's being abused by bodybuilders, especially young men, even teenagers."

Bowen said selective androgen receptor modulators were developed for people who suffer from muscle-wasting diseases to help with building muscle. The supplement can be purchased online easily, he said.

"It shuts down your body's normal production of testosterone, and a lot of times it doesn't recover, it never comes back," Bowen said. "Then you're locked into testosterone replacement for the rest of your life."

According to the U.S. Food and Drug Administration, SARMs can lead to liver toxicity and have the potential to increase risk of heart attack and stroke, along with shrinkage of the testes and male infertility.

Local trainer Matthew Lovell of Legends Gym and Health Club said he is not a fan of SARMs. Lovell has been a professional trainer for seven years and has been bodybuilding for just as long.

"Knowledge is power," Lovell said. "With bodybuilding, people just want to stay on top of all the newest things out there. People try to make SARMs seem like they're the healthy route (as an alternative to anabolic steroids) but it's not necessarily true."

Lovell said the breast enlargement that comes with SARMs is part of a process called aromatization. According to the National Library of Medicine, aromatization is when testosterone is converted into estradiol, which can lead to an increase in estrogen and lower testosterone.

"Work out and eat right," Lovell said of showing muscle gains. "If the nutrition and workouts aren't right, if you're not getting enough sleep at night, you aren't going to grow like you want to. You can look really good without touching anything (like steroids or SARMs.)"

Texarkana Independent School District's director of public relations Todd Marshall said the district's coaches have heard of SARMs but have not reported any use among athletes. Additionally, TISD's athletic teams follow University Interscholastic League policy in regard to anabolic steroids which does not permit for steroids to be used and has a rigorous testing program.

Dr. Bowen said misinformation abounds regarding the safety of SARMs. Parents, he said, may research them online and assume they are safe, since SARMs are not steroids.

"It basically is an anabolic steroid," Bowen said. "It hits the same receptors."

The FDA recommends SARMs users stop using the products immediately and consult a health care professional if they are experiencing any adverse reactions.