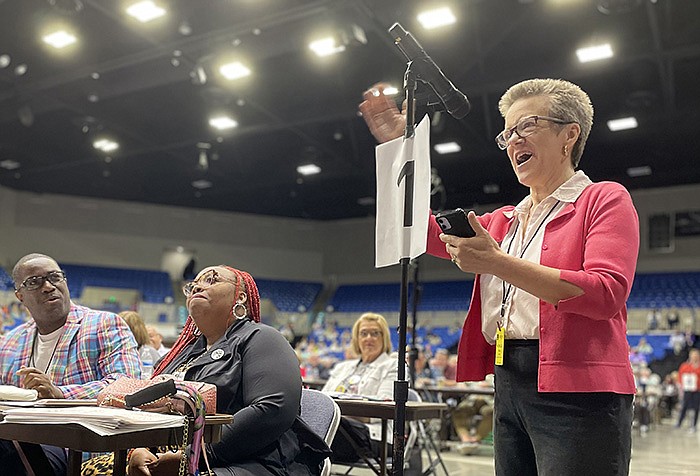 Rebekah Miles, a member of the Arkansas Annual Conference of the United Methodist Church and a professor at Perkins School of Theology, makes a motion Thursday to defer action on a proposal to make it easier for traditionalist congregations to break away without losing their property. The motion passed 366 to 270. (Arkansas Democrat-Gazette/Frank E. Lockwood)

HOT SPRINGS -- A plan that would have made it easier for theological conservatives to leave the United Methodist Church was derailed Thursday by members of the Arkansas Annual Conference, a development that surprised and disappointed many traditionalists.

A motion to defer the legislation passed 366 to 270 after opponents argued it was premature to consider the proposal.

Referred to by its drafters as a "Comity Agreement," it would allow any of the conference's 630 congregations to join a new denomination, the Global Methodist Church or another evangelical body.

Transfers would only be permitted if they had the backing of a supermajority -- two-thirds -- of a local church's voting members.

The Book of Discipline, which contains United Methodist doctrine and laws, already includes a provision, Paragraph 2548.2, allowing a congregation to transfer to another evangelical denomination with the consent of the presiding bishop and the annual conference, among others.

But skeptics have questioned whether the 2548.2 would apply to the new body, which was only launched May 1.

Last month, the United Methodist Council of Bishops asked the church's Judicial Council to rule on the application and meaning of Paragraph 2548.2.

A declaratory ruling would "provide the clarity we need concerning a disciplinary paragraph that is very ambiguous and open for misinterpretation," said Thomas J. Bickerton, the Council of Bishops' president.

Rebekah Miles, a member of the Arkansas conference and a professor at Perkins School of Theology in Dallas, made the motion to defer Thursday afternoon shortly after the legislation was introduced, proposing that it be put on hold "until the judicial council rules."

"We don't know whether this paragraph can be used or not for the purpose of disaffiliation," she said. "And we won't know until they make a decision."

"If we move forward with this today, we're going to have a big fight ... that will further divide us, and it's all over a paragraph that we don't even know if we can use for the purpose before us," she said.

Once a decision is reached, the church can revisit the issue at its next conference, she added.

Elizabeth Fink, council secretary for the Wesleyan Covenant Association, argued the delay would be counterproductive.

"Usually when things are deferred, they die," she said.

Moving forward, she said, "shows we're moving forward as a conference and not just stuck again."

Arguments over homosexuality have dominated recent meetings of the denomination's General Conference, which normally meets every four years to conduct church business.

Thus far, theological conservatives have repeatedly triumphed at these gatherings, ensuring the denomination continues to define "the practice of homosexuality" as "incompatible with Christian teaching."

They have struggled, however, to get some church officials to uphold provisions in their Book of Discipline, which bar "self-avowed practicing homosexuals" from being ordained to the ministry and which prohibit the solemnizing of "homosexual unions" by Methodist clergy or inside Methodist churches.

Conservatives are frustrated by the flouting of church discipline in some of the U.S. church's 54 regional bodies, known as annual conferences.

Progressives are fed up with denomination-wide positions they view as unjust.

United Methodist leaders from across the theological spectrum, tired of the decades-long impasse, have tried to find a solution that is acceptable to traditionalists and progressives alike.

Paragraph 2548.2 is just one of the avenues available for churches seeking an exit.

The Book of Discipline was amended in 2019 to allow congregations to "disaffiliate" from the United Methodist Church "over issues related to human sexuality," including "the practice of homosexuality" and "the ordination or marriage of self-avowed practicing homosexuality."

But the provision, referred to as Paragraph 2553, has financial stipulations that would be hard for many congregations to meet and it expires on Dec. 31, 2023. Its language expressly forbids its being used after that date.

Compromise language, unveiled in January 2020, would have made it easier for the two sides to part ways. But the proposal, which was backed by many traditionalists as well as progressives, needed the backing of the church's quadrennial General Conference.

After Thursday's vote, the congregation's pastor, Carness Vaughan, said he was disappointed that annual conference members had sidestepped the issue.

"Regardless of how the vote would have gone, deferring it while we were all there in the room ready to vote didn't make much sense to me. As a denomination we have spent years kicking the proverbial can down the road, and this feels like just one more instance of that same tactic," he said in a text message.

Bryan Fink, pastor of First United Methodist Church in Stuttgart and Elizabeth Fink's father, said the outcome had been unexpected.

"I was pretty certain that we were going to move on with that legislation. It just didn't pan out that way," he said.

John Robbins, pastor of Pulaski Heights United Methodist Church in Little Rock, said the deferral was "the best thing we can do at this point."

"I think it's the appropriate decision. I think we need more information from the Judicial Council to rule on this matter, and then we can move on from there," he said.

Arkansas Bishop Gary Mueller, who had said his goal is "to get people where they need to end up as easily and quickly as possible," has emphasized the world will be watching how Methodists handle their differences.

"I want us to be able to give a witness that even in the midst of difficulties and in some separation, that the Spirit of Christ is strong enough to help everyone realize they're still brothers and sisters in Christ," he said in an interview last month.

Late Thursday, Mueller portrayed the vote as a temporary pause.

"The body deliberated, did it well. And it was not a final decision; it was simply to get more information before deciding," he said. 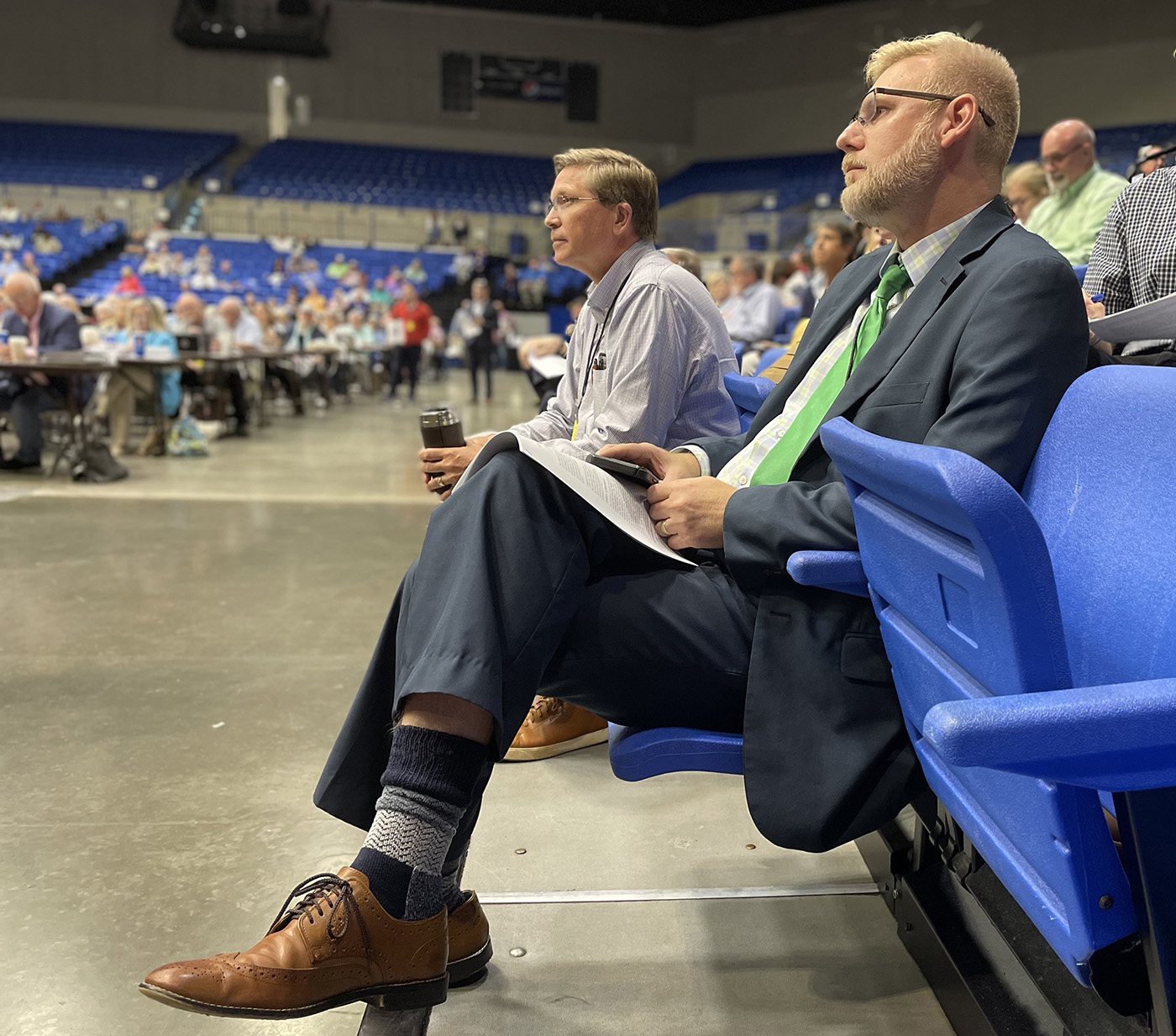