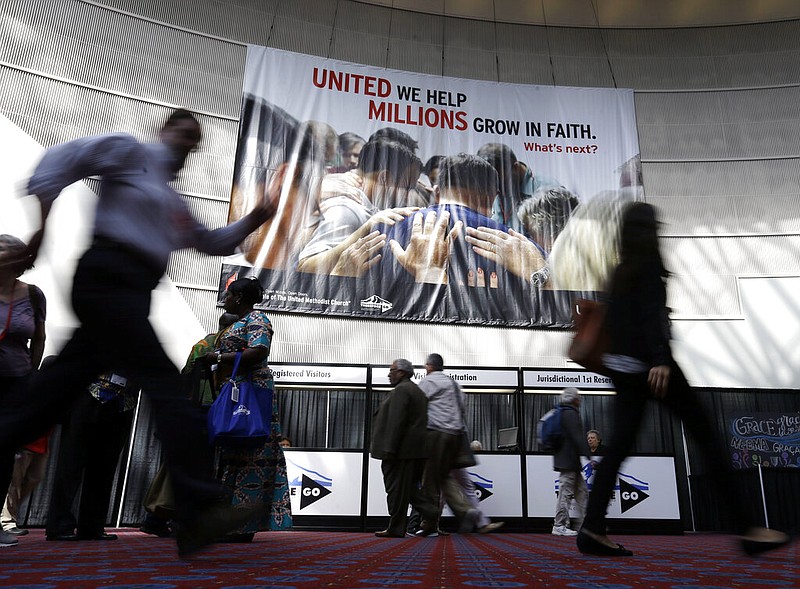 Attendees head to a morning plenary at the United Methodist Church General Conference in Portland, Ore., in this May 17, 2016 file photo. The conference adopted a measure to "call upon United Methodists to prayerfully address gun violence in their local context." (AP/Don Ryan)

Days after a gunman murdered 19 students and two teachers in Uvalde, Texas, members of the Arkansas Conference of the United Methodist Church urged members of the state's congressional delegation to "support and act upon Responsible Fire-Arm legislation."

The resolution, which was debated at the body's annual conference in Hot Springs on Friday, was introduced by Andrew C. Kjorlaug, a U.S. Army battalion chaplain at Fort Campbell and a former United Methodist pastor at churches in Marion and Charleston.

A similar resolution had previously been adopted by the broader denomination during its 2016 General Conference in Portland, Ore.

In the wake of the May 24 mass shooting at an elementary school and what police say was a racially-motivated May 14 massacre at a Buffalo, N.Y., supermarket that claimed 10 Black lives, "I just kind of felt it was past time for us as the United Methodists in Arkansas to address this issue," Kjorlaug said.

The resolution alludes to a New Testament passage that emphasize Christ's love for children and Hebrew Bible teachings about children being a gift from God.

Citing The Washington Post, the resolution says there have been more than 550 separate school shooting incidents in the United States since 1999, resulting in at least 185 fatalities and exposing more than 311,000 children to gun violence.

"Responsible Fire-Arm legislation," as defined by the resolution, would include:

• Mandatory background checks for all gun sales, including gun shows and private sales.

• The prohibition of further sales of military style assault rifles (most notably the AR15).

• The prohibition on high-capacity magazines.

• The extension of waiting periods to all firearm sales.

• The implementation of red flag laws.

• The expansion of mental health care as a guaranteed right and coverage to all persons.

• The establishment of a minimum age of 21 to purchase a firearm.

Cotton, the only member of the delegation listed as a United Methodist, was unavailable for comment Friday evening, a spokesman said.

All six members of the delegation have enjoyed the backing of the National Rifle Association and have opposed Democratic efforts to increase gun restrictions.

Before Friday's vote, four Arkansas Methodists spoke in favor of the resolution, four spoke against it.

A conference spokeswoman said a recording of the debate was not available Friday evening.

Three of the four Methodists who spoke against the resolution declined to speak with a reporter late Friday. A fourth could not be reached for comment.

Asked after the vote whether he was politicizing the church, Kjorlaug insisted the measure was compatible with Christian teaching.

"The church very much stands by the idea that we both share the Gospel of Jesus Christ [and] we also speak up for the least, the last and the lost, the forgotten of society," he said.

"When we look at a lot of mass shootings, we're talking about children who cannot speak up for themselves in many respects. We're talking, many times, about marginalized communities, whether by economics or by race, who may not have the economic clout, or the legal clout, to affect change," he said. "So for me, the church making a statement to our legislators saying, 'Hey, something needs to happen', is well within our role."

"I am very pleased that the body of the Arkansas Annual Conference could have productive conversation and deliberation concerning this adopted resolution. It is perfectly aligned with the United Methodist Book of Discipline and the Social Principles," he said.