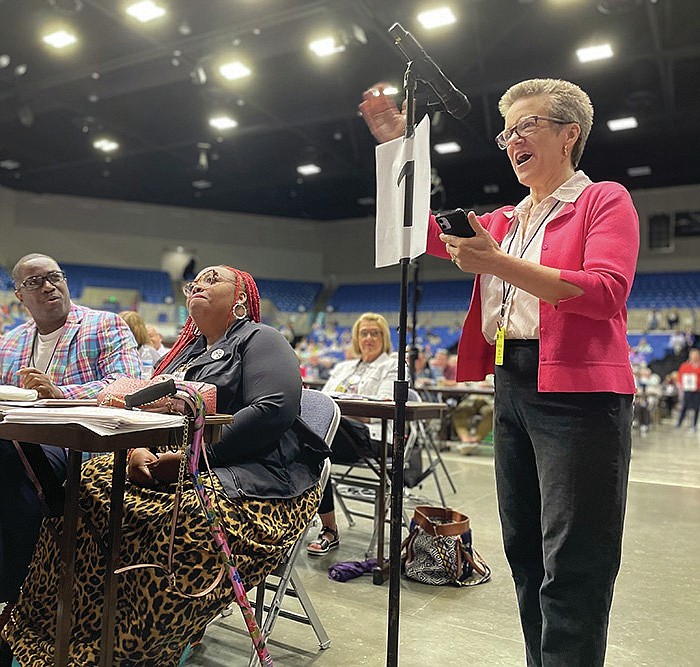 Rebekah Miles, a member of the Arkansas Annual Conference of the United Methodist Church and a professor at Perkins School of Theology, makes a motion Thursday, June 2, 2022, to defer action on a proposal that would have made it easier for traditionalist congregations to breakaway without losing their property. The motion which passed 366 to 270, comes as some of the state's largest Methodist congregations are weighing whether to disaffiliate from the denomination. (Arkansas Democrat-Gazette/Frank E. Lockwood)

A pro-gun control Arkansas United Methodist minister, pretending to be a Second Amendment activist Friday, made remarks so incendiary during an Arkansas annual conference debate on firearms restrictions that state United Methodist officials turned off his microphone and attempted to hide video of the session.

Claims by White Hall United Methodist Church pastor Doug Phillips, a father of four, that gun rights were more precious than the lives of his own children roiled an otherwise civil gathering.

A spokeswoman for the Arkansas Conference of the United Methodist Church initially attributed the missing video to a "technical glitch," but later acknowledged that the recording had been intentionally erased and said the entire session would be reposted once it had been obtained.

After the Democrat-Gazette published an article Saturday about the firearms resolution, a member of the denomination, who requested anonymity, provided the paper with a video clip of Phillips' remarks.

Officials with the Arkansas Conference of the United Methodist Church subsequently gave the paper a video copy of Phillips' remarks, as well as his apology, and said they would be posting the video online Sunday evening. It can be found at https://youtu.be/W9qoD6q75Dc.

The preacher's fiery comments came as Arkansas Methodists were about to vote on a resolution urging members of the Arkansas congressional delegation to support gun restrictions.

The debate came on the heels of a mass shooting at a Uvalde, Texas, elementary school on May 24 that left 19 students and two teachers dead, and a racially motivated massacre May 14 at a Buffalo grocery store that claimed 10 Black lives.

Gun-related deaths did not pause during the annual conference, either. On the eve of the vote, two college students were shot and killed in the parking lot of an Ames, Iowa, church.

In an interview Sunday, Phillips said he had falsely claimed to be a "gun enthusiast" because the four slots allotted to resolution supporters had already been claimed and only slots for resolution opponents remained.

Phillips' claims that the "sacred" Second Amendment is "given to us by God" had some audience members shaking their heads in disapproval.

But it was his final statement that left audience members gasping, including school-aged Methodists who had assembled to watch the debate.

"I have four children and I would sacrifice any one of them to be able to keep my guns," Phillips said.

Bishop Gary Mueller, who was presiding over the session, asked the audio crew to cut off the microphone and told Phillips his comments had been "out of order."

The preacher walked away from the microphone, smiling as he went.

After a lunch break, Phillips subsequently apologized, telling conference members: "In our conference today, I practiced poor judgment, was impulsive and disrespectful, and I did not show this conference the proper respect that you all deserve."

He also told the audience that he doesn't own any guns, he supported the resolution and he loves his kids.

"This was out of character for me and I am deeply remorseful for how I behaved," he said.

In an interview with the Democrat-Gazette Sunday afternoon, Phillips reiterated that he regretted his remarks.

"A lot of the folks in our conference, because I'm still kind of new, they did not realize I was being sarcastic and some people got really hurt," he said. "It broke my heart that I had hurt anybody or that anybody would have thought that I was being serious."

Asked whether his gun-related statements could accurately be classified as "lies," Phillips suggested referring to them instead as "hyperbole."

In a written statement Sunday, Mueller said Phillips' comments " harmed the body and, in particular, those youths who had spoken so passionately about the fear they live with concerning their safety while in school."

Noting that Phillips had apologized, Mueller said, "He did so with grief and deep remorse for his actions and their impact. The Conference received his apology with appreciation and grace," the bishop said.

"I have spoken with Rev. Phillips several times and based on his public apology, my conversation with him, my knowledge of who he is and his willingness to make amends as might arise, I believe we can move forward," Mueller said. "Christians are not perfect, but I am grateful to be part of a community of faith that leads with grace and deals with real-life issues through confession, repentance and forgiveness."

During the Sunday morning worship service in White Hall, which was livestreamed, Phillips made no explicit mention of his conduct at annual conference.

But he apologized profusely for his words and actions at the White Hall church on the previous Sunday.

Members of his congregation, he said, had "witnessed me do something very out of character, and I don't have an excuse for becoming the angry pastor."

In a mea culpa that was similar to his Hot Springs apology, Phillips acknowledged "saying stuff that could not be further from what I know to be true" and said his words had "hurt people, especially people I really admire and care for."

He asked forgiveness and said he would "listen and learn from this mistake."

When the Democrat-Gazette asked Phillips on Sunday afternoon for a video copy of the previous Sunday's incident, Phillips said there had been technological difficulties that morning and that a recording might not be available.

Asked to explain what had happened, Phillips said he had delivered a sermon focused on "nationalism" over the Memorial Day weekend and that it had upset "some of my vets in the congregation."

"In hindsight," he said, "Memorial Day weekend is probably not a great time to talk about nationalism."