Nigerian forces hunt for gunmen who killed 50 at church 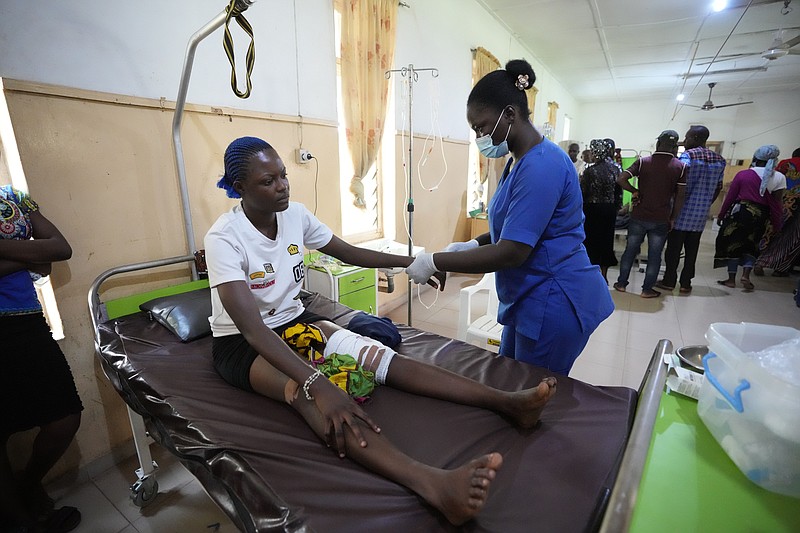 OWO, Nigeria -- The gunmen who killed 50 people at a Catholic church in southwestern Nigeria opened fire on worshippers both inside and outside the building in a coordinated attack before escaping the scene, authorities and witnesses said Monday.

Although Nigerian security forces have not yet identified who carried out Sunday's attack on St. Francis Church in the town of Owo in relatively peaceful Ondo state, analysts suggested they came from elsewhere in the West African nation, which is plagued by violence from various armed groups, kidnappers and extremists.

No one has claimed responsibility for the church killings, in which children were among the dead and the gunmen detonated some kind of explosive. Scores of people were wounded, although an exact number was not released by overwhelmed hospital workers.

"The attack is undoubtedly terrorist in nature, and the scale and brutality suggests it was carefully planned rather than impulsive," said Eric Humphery-Smith, senior Africa analyst at Verisk Maplecroft risk intelligence company, in an interview with The Associated Press.

State Police Commissioner Oyeyemi Oyediran said security forces, including the military, pursued the attackers, "but unfortunately, we could not catch up with them."

Vice President Yemi Osinbajo and other government officials visited the church Monday. A day earlier, he pledged that "we will keep standing against evil, and Nigeria will win."

Nigeria, which is Africa's most populous country with 206 million people, has grappled for over a decade with an insurgency in the northeast by Islamic extremist rebels of Boko Haram and its offshoot, the Islamic State West Africa Province. The extremists, who have killed more than 35,000 people by a U.N. count, are fighting to establish Shariah law and to stop Western education.

Ondo, however, has long been considered one of the safer states in the country.

Sunday Adewale, who works in the palace of the local chief, said the gunmen used the element of surprise to their advantage.

"Everybody felt relaxed and had gone to church," he said. "Within 30 minutes, they did what they wanted and went away."

The attack came as worshippers were celebrating the feast of Pentecost, an important Catholic post-Easter holiday. Bishop Jude Arogundade said some gunmen entered the church while others stayed outside to shoot anyone who fled.

The priest celebrating the Mass was giving the blessing to end the service when the attackers came in and opened fire, said John Nwovo, 35, who added that he narrowly escaped with his five children by running and hiding in the church's sacristy, along with more than 30 people.

"We had to pack ourselves inside that place to take refuge from the storm," he told AP.

After emerging from hiding, Nwovo said they saw "so many" bodies lying in their own blood.

Florence Obi said her sister, Stella Nzelu, fled the church after the shooting and the explosion, only to run into one of the outside gunmen, "who shot her in the stomach at close range." Obi said her sister underwent surgery to remove the bullet and "she is feeling better now."

Steven Omotayo, who lives nearby, heard the gunshots and rushed to the scene.

"I saw a lot of dead bodies -- both young and old, even children," he said. "The people came in and started shooting from the gate."

He said the church has three entrances and the main entrance was said to have been locked, making it difficult for many to escape.

"They were just shooting. If they see anyone trying to escape or stand up, they will just shoot the person," he said. "Everybody standing was bombarded with bullets."

The Rev. Vincent Anadi, who was away from his church at the time, said the gunmen also set off some kind of explosive or grenade.

He said he was making his way back to the church when he saw people running away chaotically, including two altar servers that he knew.

Many Nigerians expressed shock and anger over the attack in Owo, a small town of traders and government workers located 50 kilometers (31 miles) from the Ondo state capital of Akure. The central location of the church raised questions as to how the gunmen got there unnoticed.

Rahaman Yusuf said many people tried to find out the fate of their relatives after the attack. "Some came only to realize they are dead," he said, adding that they also went to hospitals to see if their loved ones were among the wounded.

Olalekan Agboola was in Lagos when he learned his 70-year-old mother, Caroline, was killed, and he rushed to Ondo. In a telephone interview from the town, he grew emotional as he recalled talking to her by phone on Saturday and how "she used to call us and pray for us."

Workers at the Federal Medical Center in Owo struggled to treat scores of wounded from the attack. The Nigeria Medical Association directed all available doctors in the region to help.

Some of the wounded were in a "very bad state" and needed surgery, according to a doctor there who spoke on condition of anonymity because he was not authorized to talk to journalists.

"I have attended to a good number of casualties, but what I saw yesterday was far beyond whatever I have seen before in my life," the doctor said. "This calamity befell all age grades, from toddlers to the old ones."

Blood supplies at the hospital ran out, and a plea for more has gone out, the doctor added.

Mahamat Saleh Annadif, head of the United Nations Office for West Africa and the Sahel, said he hopes "the perpetrators of this horrific terrorist act against a church will be swiftly apprehended and brought to justice."

Pope Francis decried "this act of unspeakable violence" in a condolence telegram sent by the Vatican's secretary of state on his behalf to the Ondo bishop.

"His Holiness prays for the conversion of those blinded by hatred and violence so that they will choose instead the path of peace and righteousness," it said. 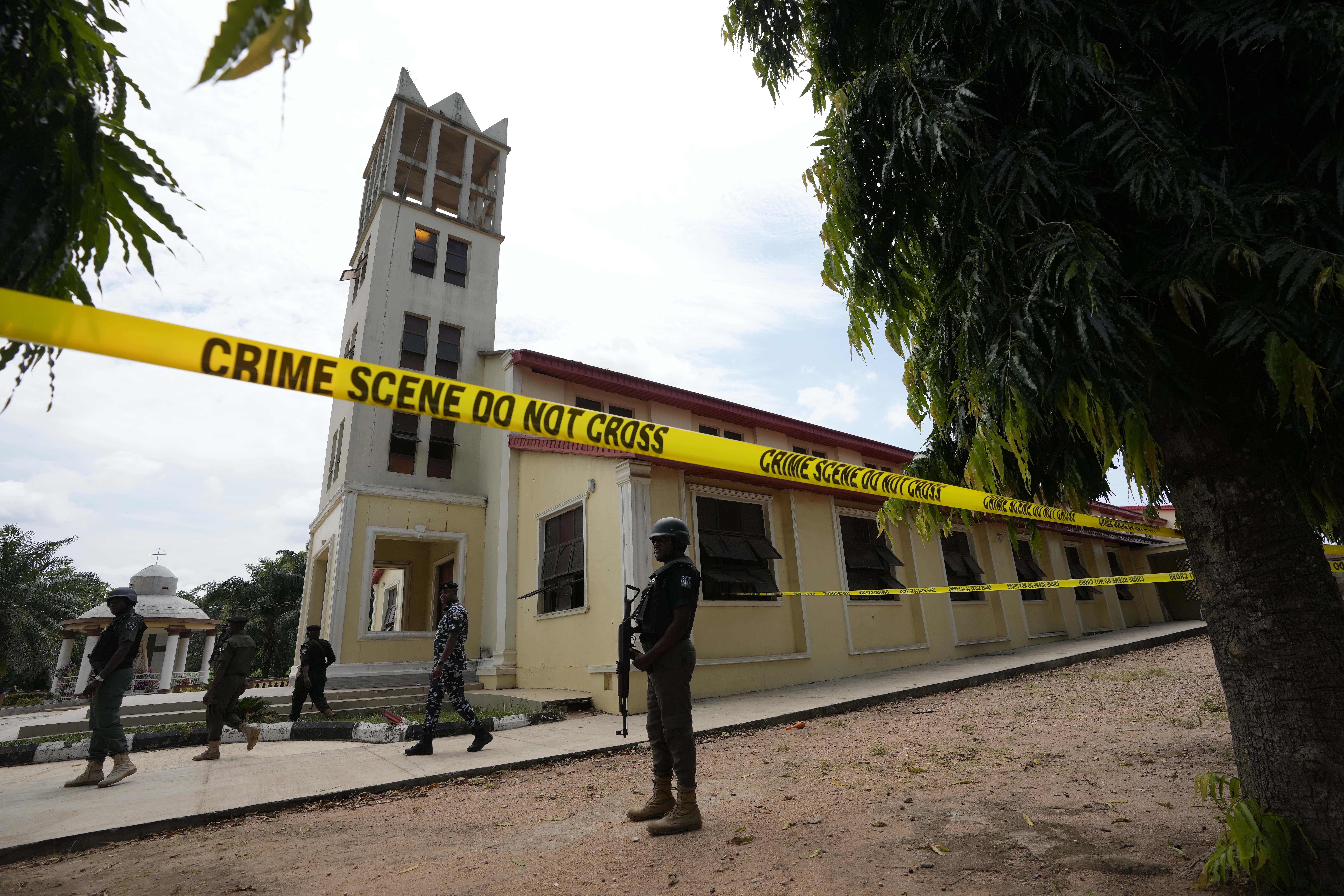 Nigerian police stand guard outside of the St. Francis Catholic church in Owo, Nigeria, Monday, June 6, 2022 a day after an attack that targeted worshipers. The gunmen who killed 50 people at a Catholic church in southwestern Nigeria opened fire on worshippers both inside and outside the building in a coordinated attack before escaping the scene, authorities and witnesses said Monday. (AP Photo/Sunday Alamba) 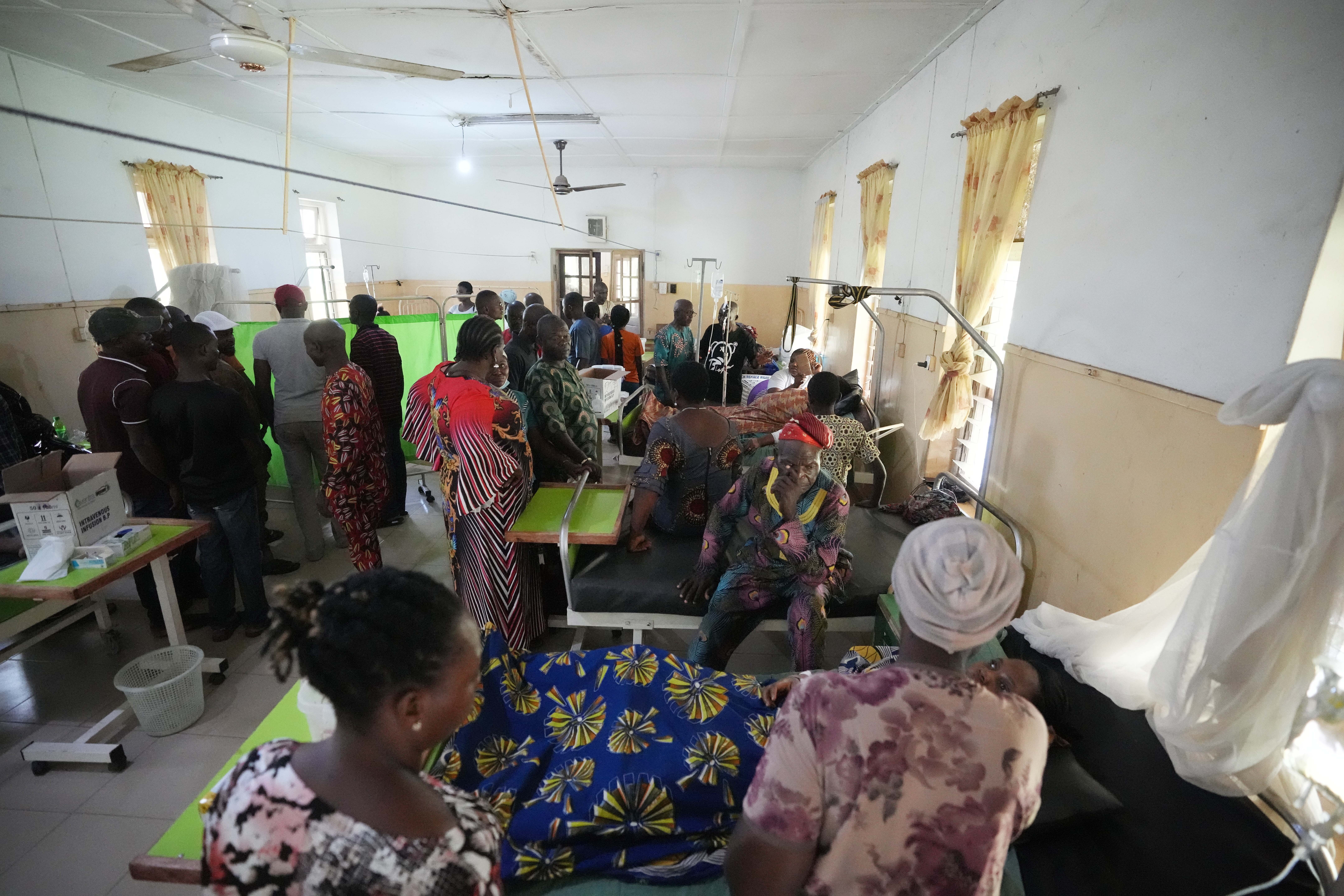 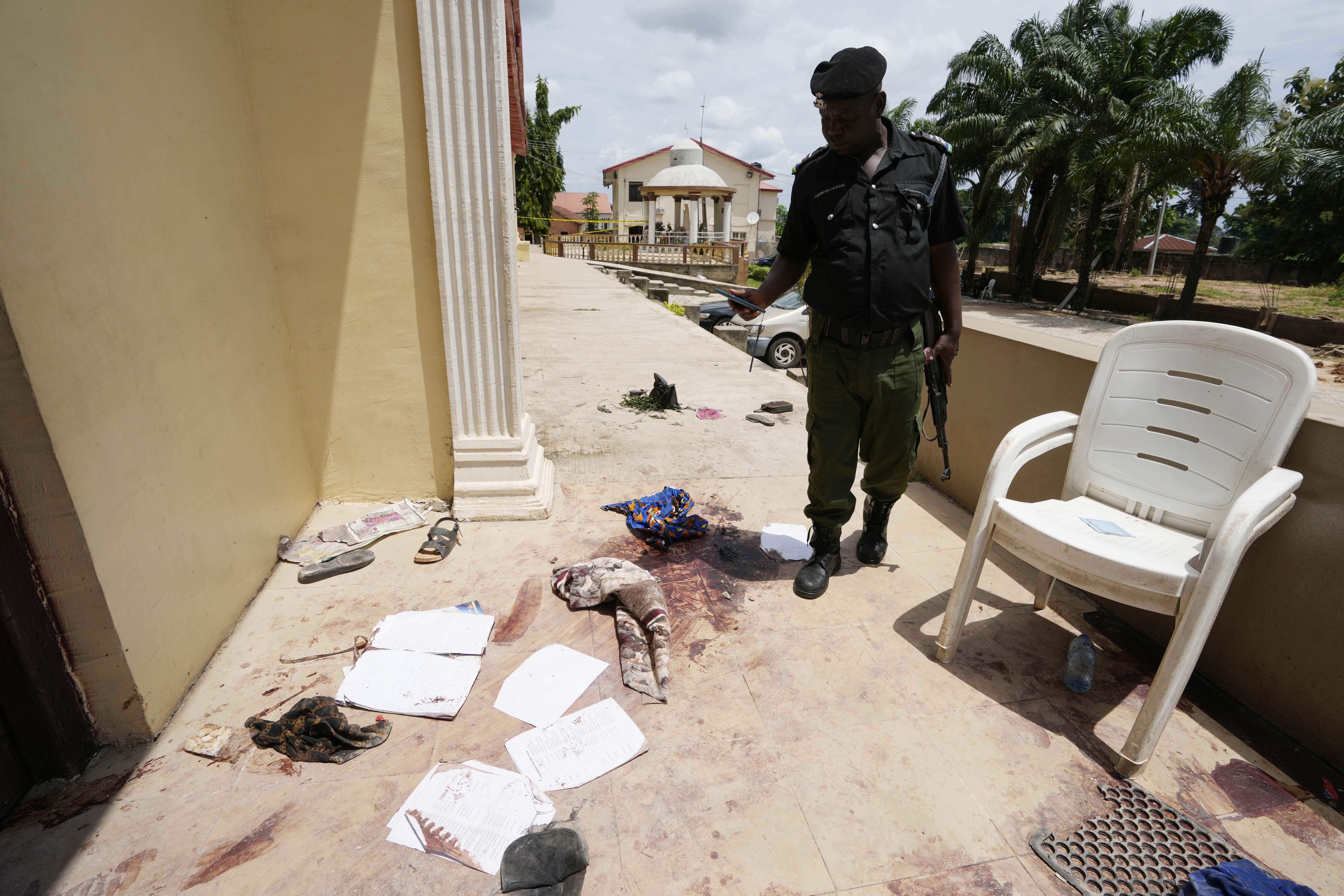 A police officer stands guard outside of the St. Francis Catholic church in the town of Owo, Nigeria, Monday, June 6, 2022. The gunmen who killed 50 people at a Catholic church in southwestern Nigeria opened fire on worshippers both inside and outside the building in a coordinated attack before escaping the scene, authorities and witnesses said Monday. (AP Photo/Sunday Alamba)