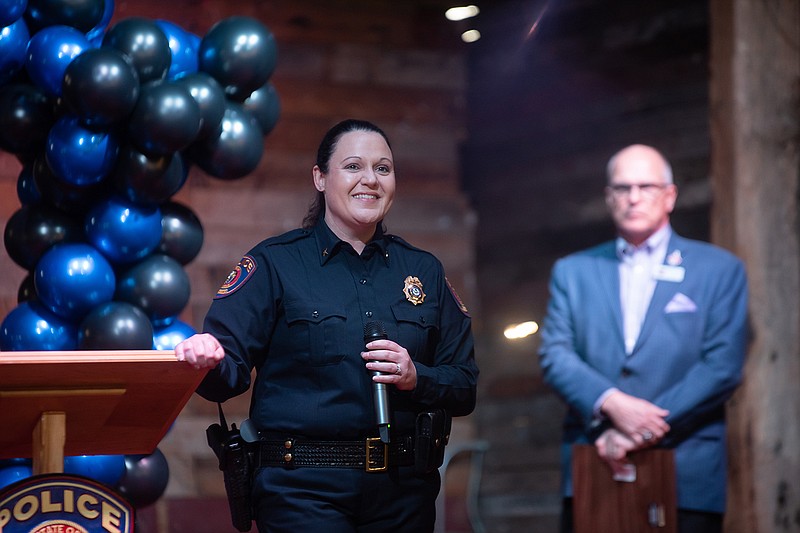 Kristi Bennett addresses the crowd Wednesday following her pinning ceremony as the first female chief of the Texarkana Arkansas Police Department as Mayor Allen Brown stands behind her at Crossties.

The move, which was not an easy decision to make, will allow her to be closer to her parents and grandparents.

She grew up in Jessieville, Arkansas, north of Hot Springs and attended Henderson University in Arkadelphia.

“I have mixed feelings. I came to Texarkana straight out of Henderson University as a 21-year-old girl and built an incredible family around me. Not just the work family, but our community," Bennett told the Gazette. “I planned to serve longer as chief but an opportunity came up that I could not turn down."

Bennett, who has been an officer since 2005, became the city's first female police chief in March 2021. Her last day with TAPD will be July 6.

She wrote a letter to TAPD officers and staff expressing her gratitude for the support they have given her during her career and time as chief.

“After much contemplation of a life-changing move and prayer for the right direction for my family and me, we have decided to take on this new endeavor, which will bring me back home after 20 years away," Bennett wrote in the letter. "The decision to move agencies was not an easy one for me, as I will be saying goodbye to an exceptional group of officers and staff who are by far the highly educated, exceptionally trained, and exceedingly devoted of our profession."

In the letter, Bennett also thanked the officers and staff for the “love, support and loyalty” they have shown her and called it an “honor and privilege” to serve with them.

Her first day on the job at TAPD was in January 2005 and it was her 22nd birthday. She was a patrol officer on the night shift.

There were five women on the TAPD force when Bennett joined. Now, there are about 10.

In September 2020, she was asked to fill in as interim chief when Chief Robert Harrison announced his retirement.

“We began a whole new exciting journey in 2020 to bring TAPD forward into a more progressive, community-oriented, and efficient police agency," she said. "Although I expected to have had more time with you all to finish out our transformation, I now leave with pride in knowing who you are and in what you will continue to do for this agency and this great community."

Hot Springs Village is a smaller department and Bennett is looking forward to community policing there.

Working with the community to create bridges between people of all walks of life has been her proudest accomplishment in Texarkana, she said.

As an officer, she has made efforts to work with local children.

One of those efforts was her creation of PRIDE (Personal Responsibility in Daily Effort) program for at-risk students in Texarkana Arkansas. In 2016, she was honored for her efforts by the National Association of Police Organizations in Washington D.C.

PRIDE came out of a project Bennett worked on in graduate school.

She worked on her master’s degree through Southern Arkansas University and her thesis project was whether a youth outreach program could help decrease crime.

Bennett said TAPD will continue PRIDE and she plans to visit for a few days this August to spend some time with the PRIDE kids.

“TAPD is committed to PRIDE. It has not been my success but the community’s success,” she said.

Bennett’s husband, Joe Bennett, has left his position as director of the Miller County Office of Emergency Management to make the move with her.

Bennett is looking forward to spending time with her elderly grandparents because it has become harder for them to visit her.

“It has become harder to say goodbye to them after monthly visits,” she said.

Her brother and his wife also live in Hot Springs area and are expecting their first child.

“It’s going to be an really exciting time to be part of their lives,” she said.

Texarkana Arkansas City Manager Jay Ellington said in a news release that he accepted Bennett’s resignation with “great sadness” but that he is “grateful” for her years of service to the community.

“Her commitment to well-trained officers and staff coupled with her exceptional love for our city have made her an excellent chief. We will miss her in our organization, but we wish her the best as she continues her career,” Ellington said.

He said the city will start its search for the next police chief soon.